Thanks so much for the Thanksgiving wishes yesterday! Warmed my heart. 🙂 Last year I made Ina Garten AKA the Barefoot Contessa‘s mammoth Old-Fashioned Apple Crisp recipe for New Year’s Eve. It was a huge hit! It was seriously the best apple crisp I had ever tasted and have been wanting to share it with you ever since. […]

When I was a kid, every fall my mom would make homemade sweet pickles. I am not one for sweet pickles very much but I did love to snack on these beauties. I always found them so unique, something you would not find at the grocery store but only in my childhood. I was inspired […] 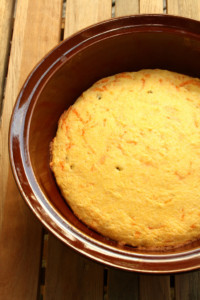 Yesterday was the day of the first harvest of summer. You know I love food traditions so I just had to participate and make traditional cornbread to celebrate. Thankfully the heat wave has lightened up a little so I decided it was safe to bake some. Who knows cornbread better than Ms. Paula Deen the queen […]

I do not know if you can call strawberry rhubarb pie retro but you absolutely can call it a classic! We will be getting our first day of really warm weather today so yesterday while the rain was gently falling outside I decided to make a pie white it was still cool. I was inspired […] 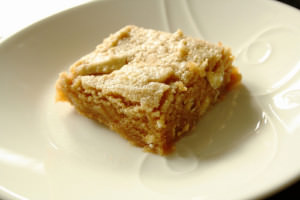 According to the American Food Network Facebook Page, yesterday was National Peanut Butter Lovers Day. I am actually not a big peanut butter lover, I like it but would not include myself in this demographic… until I made Rachel Allen’s Peanut Butter Blondies! Crazy delicious, I could not stop eating these after they came out […] 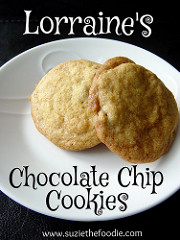 Although I made these with butter for this post, I recommend making them with shortening. They are much better that way! These are the first cookies I made after I left home and was on my own. I had moved from Toronto to Ottawa and really wanted to learn how to bake. Who did I […]

The rich smooth-textured dessert is known as Burnt Cream in England where is has been popular since the seventeenth century. It was not, however, until late in the nineteenth century that the French term crème brûlée, which means precisely the same thing, became popular and the dessert became standard fare in many American restaurants. ~ […]

In a matter of hours, my dad will be here visiting for the next couple of days. Yesterday I agonized over this apple pie: should I pre-cook the filling and then make the pie on Sunday or should I just bake the pie right now? I do not like to bake under pressure so I […]