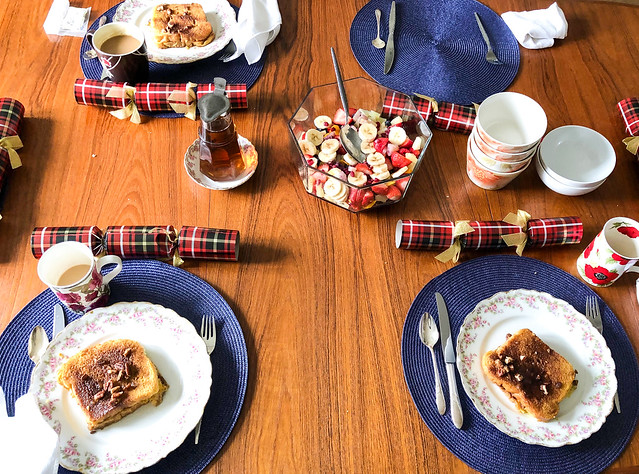 Last weekend we took a train to go surprise our dad for his birthday! To say it worked is an understatement. He had absolutely no idea that we were coming and that look of astonishment on his face was priceless.

We got to spend the weekend together catching up and in true Ridler fashion, eating way too much amazing food like this Overnight French Toast Recipe Julie made that reminded me so much of the best brunch I have ever had at Melanie’s Bistro before it shut down. Bliss! 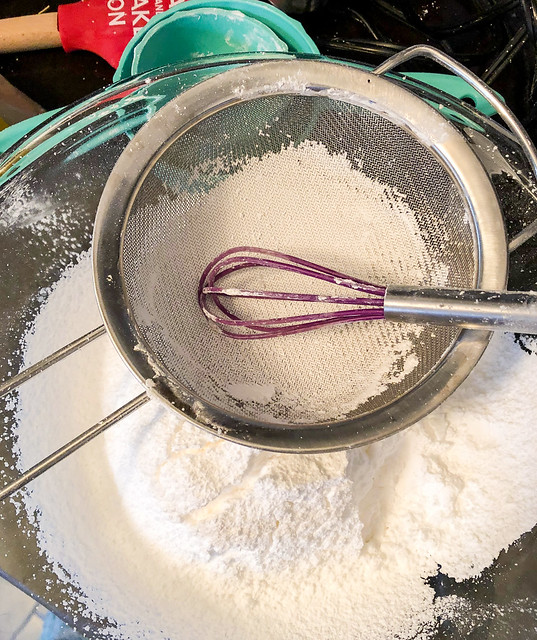 It has been almost 10 years since I had made Anna Olson’s Irish Creamy Fudge so I was a little nervous making it for my dad as his birthday gift. As a result, I tried to plan as much in advance as I could. I sifted the 2 ¼ cup icing sugar first. 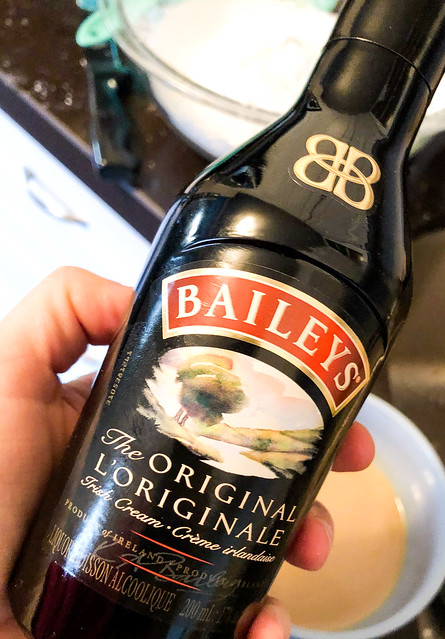 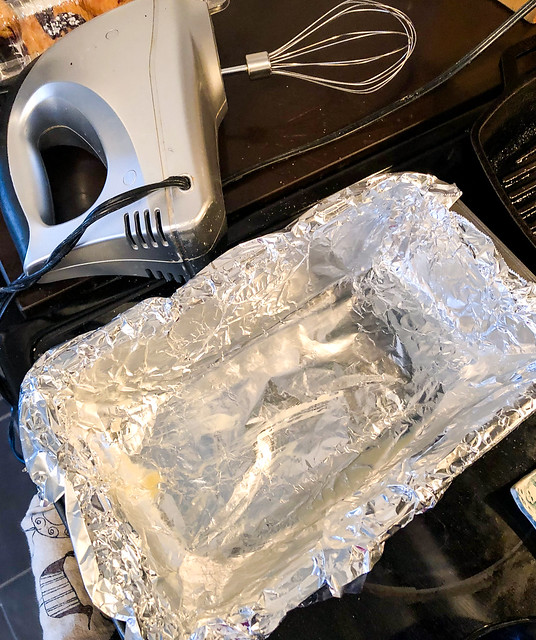 I got out my hand mixer with whisk attachment. I decided to use a loaf pan which I lined with foil and butter, unlike Anna. 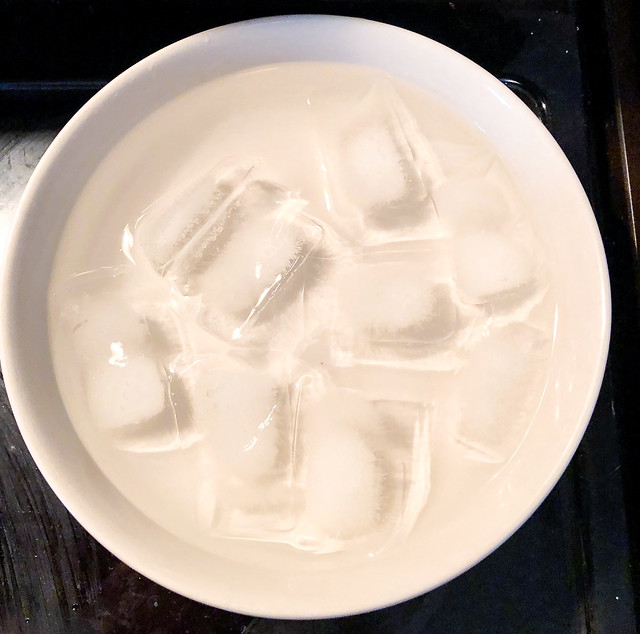 Safety first! Always when candy-making have a bowl of ice water on hand. 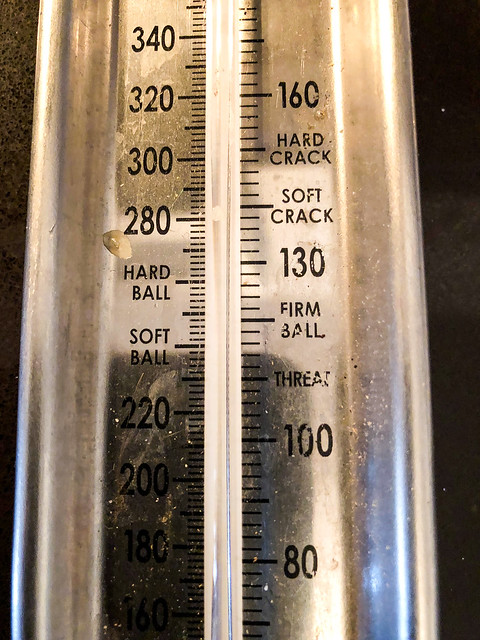 I got out my old fashioned candy thermometer but had a digital backup just in case. I thought I was ready for anything. 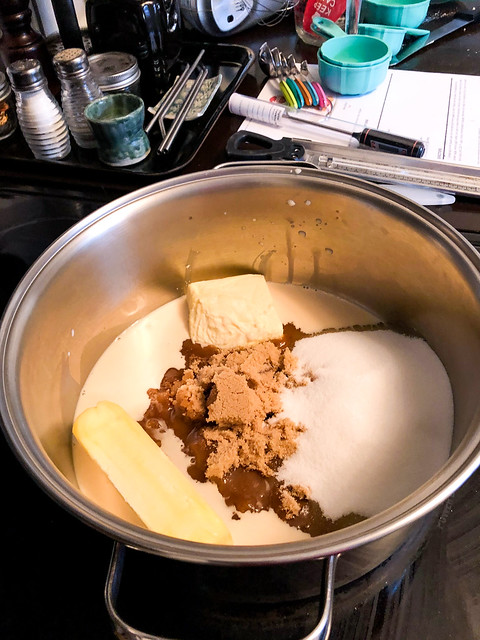 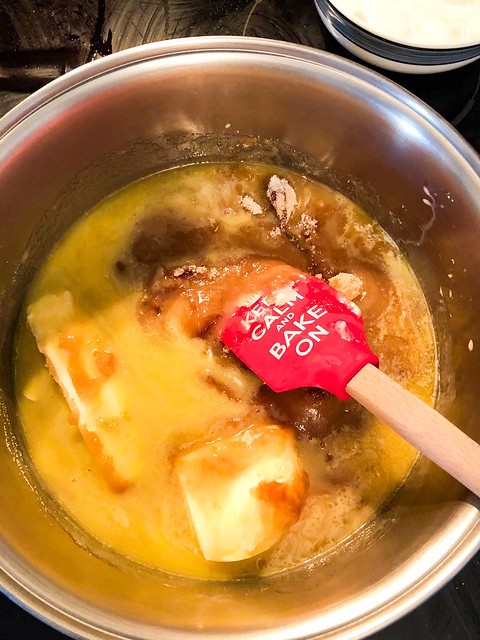 Bring to a boil over medium heat, stirring often. 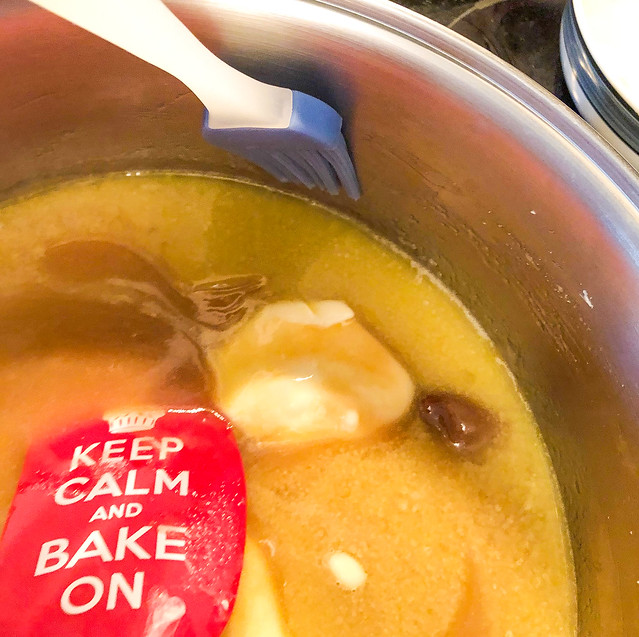 I also brushed the sides of the pan to get rid of sugar crystals. 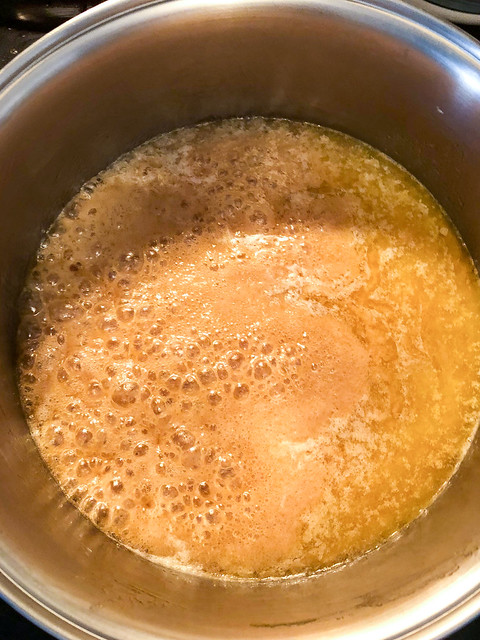 Cook until 238°F (use a candy thermometer to gauge). 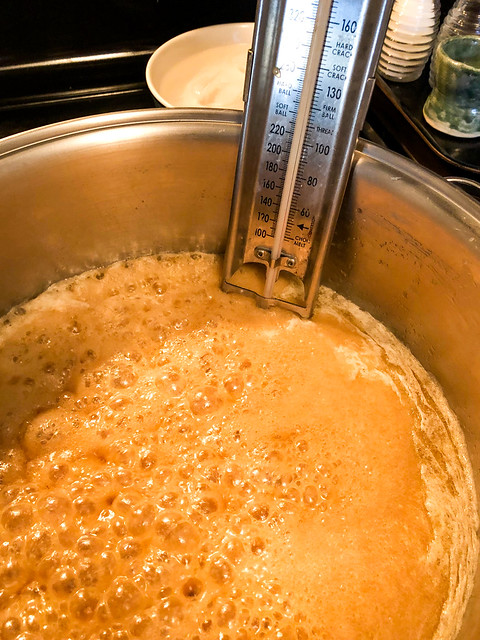 That sounds easy enough but I realized my candy thermometer had things like “soft ball,” “firm ball…” written where the numbers should have been. I took out my instant read thermometer and it kept defaulting to Celsius! By the time I got it to show Fahrenheit it was hotter than 238F damn it! 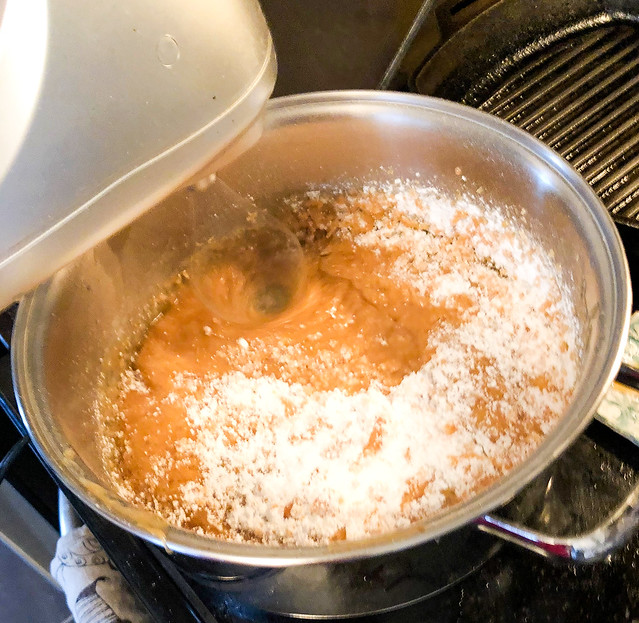 Remove from heat, stir in vanilla and Irish Cream and scrape into a bowl or mixer fitted with the paddle attachment. My mixer is too heavy to bring upstairs so this was the best I could do.

With the mixer on low speed or electric beaters, add in the icing sugar in three additions, mixing well after each addition. 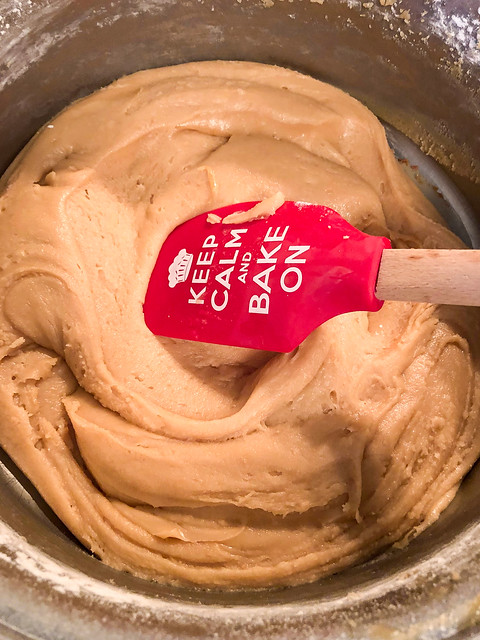 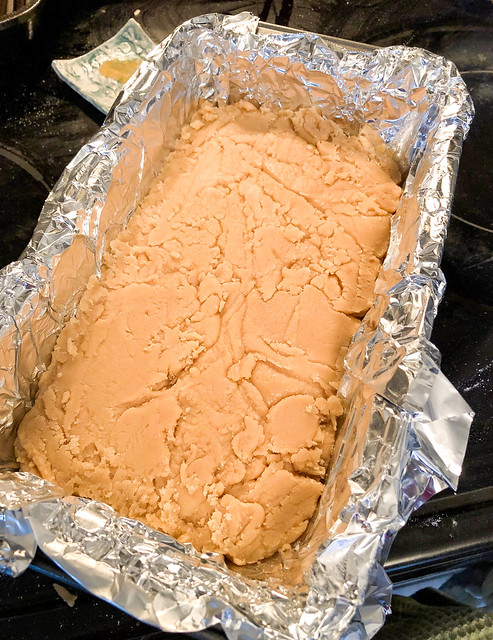 Yes… Not quickly enough I am afraid to keep that creamy look. The good news? I have heard back from them that the fudge was perfect despite appearances! Phew…

Moral of the story, get a good candy thermometer. Which I thought I had! 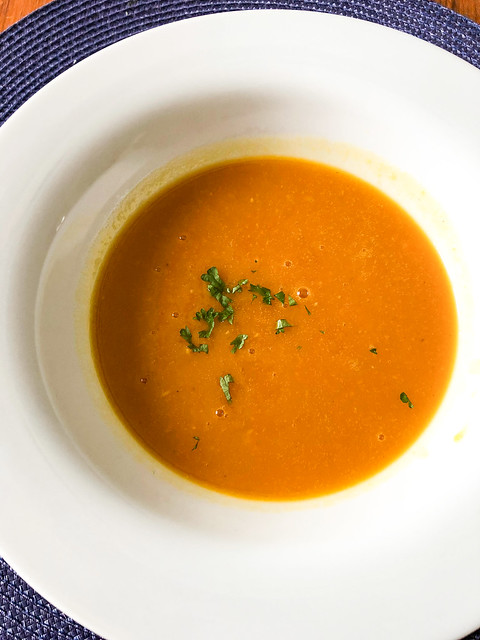 It was a very decadent weekend of enjoying homemade squash soup. 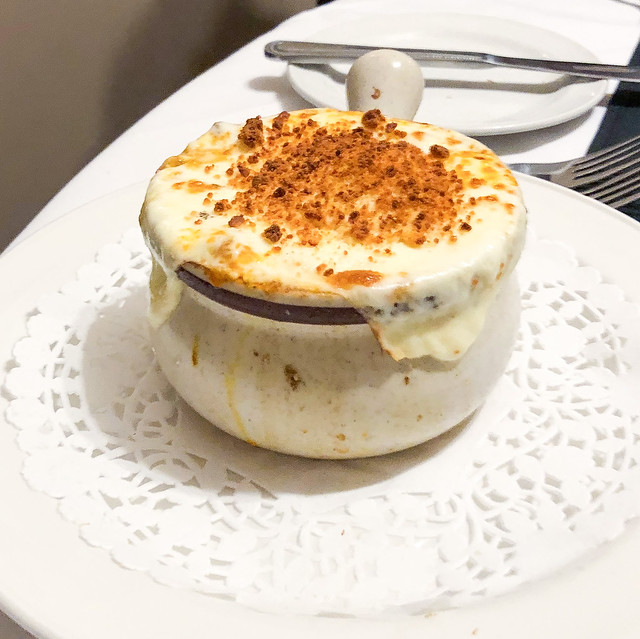 We had a private room at Ramekins Restaurant and man, I should have ordered the French Onion soup! 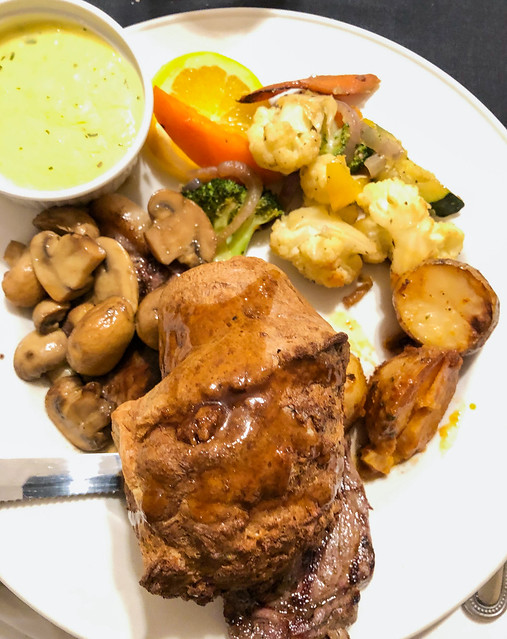 I got the New York Steak special and asked for Bearnaise sauce and a Yorkshire pudding which you can see from this photo eclipse the plate. It was HUGE! 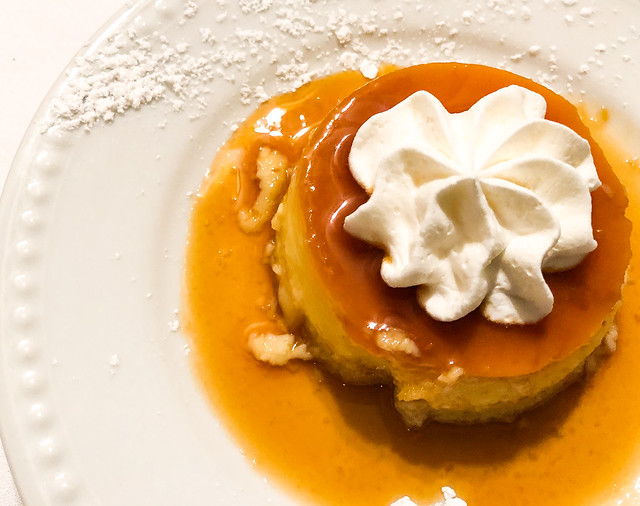 We finished the dinner celebration with dessert and I ordered the crème caramel. 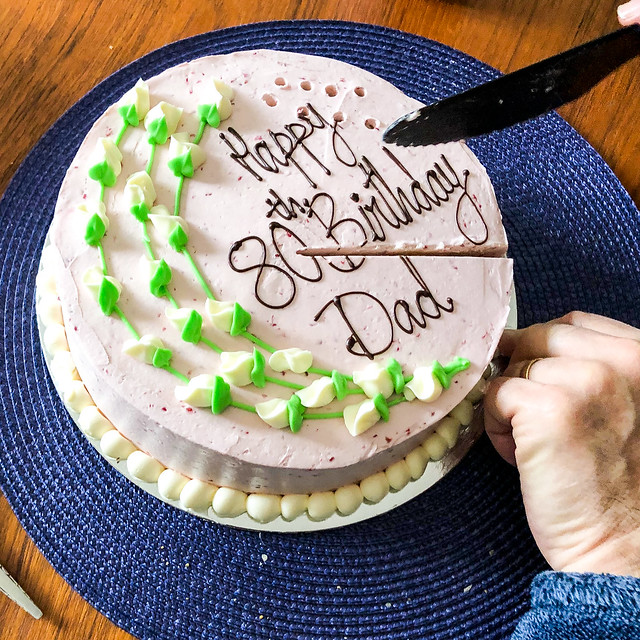 The next day we had that incredible Oven French Toast for breakfast and then cake for dessert. What a superbly delicious, fun and special weekend to celebrate our dad’s birthday.

Despite the challenges I had making the Irish cream fudge it made me realize how much I want to make candy and need to start investing in the right tools and ingredients to make it happen. Next time I want my fudge to be perfectly smooth as well as perfectly delicious.