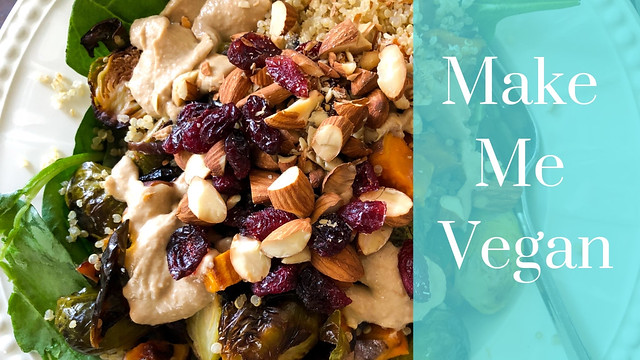 To make this a “spring” version of the recipe I just omitted the pomegranate seeds!

Back in February I tried Pick Up Limes recipe for Black Bean Burrito Bowl which was quite delicious. I wanted to see if I would miss meat with her approach to vegan cooking which honestly comes across as much more delicious than most vegan dishes. Last month I tried her Nourish Bowl With Homemade No-Cook Miso Gravy. It was not the most camera-friendly dish but we all enjoyed it and it was fun to use nutritional yeast again. Like I used to back in my vegetarian days. 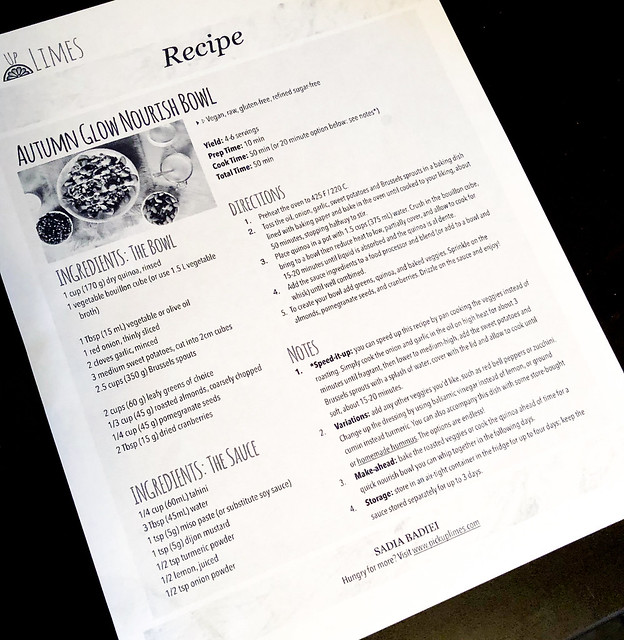 PRINT MY VERSION OF RECIPE!

This time I tried her Autumn Glow Nourish Bowl and there were issues. Mostly with the writing of her recipe which drove me crazy. The dish was delish but the instructions drove me nuts so I wrote up my own recipe here so you will not make mistakes like I did. 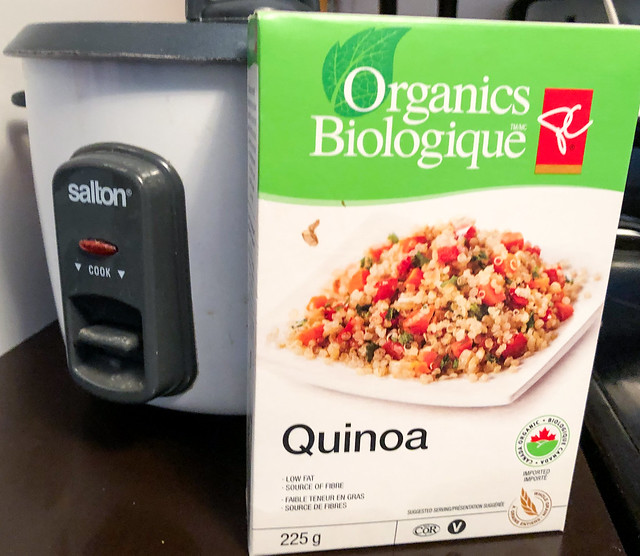 The dish is served over quinoa which my sister Jamie taught me can be made in a rice cooker! Sweet! Super easy. I did not use broth or a bouillon cube but think that is a great way to infuse flavour into the dish. 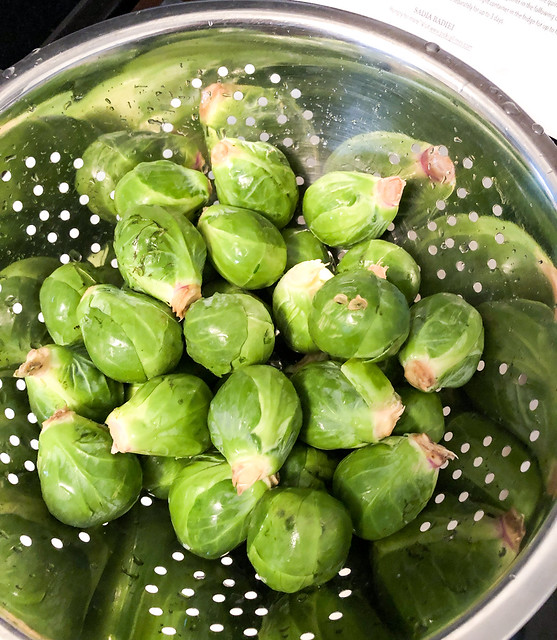 The recipe says to use 2.5 cups of Brussel sprouts. That is it. No mentioning of having to wash them, trim them… 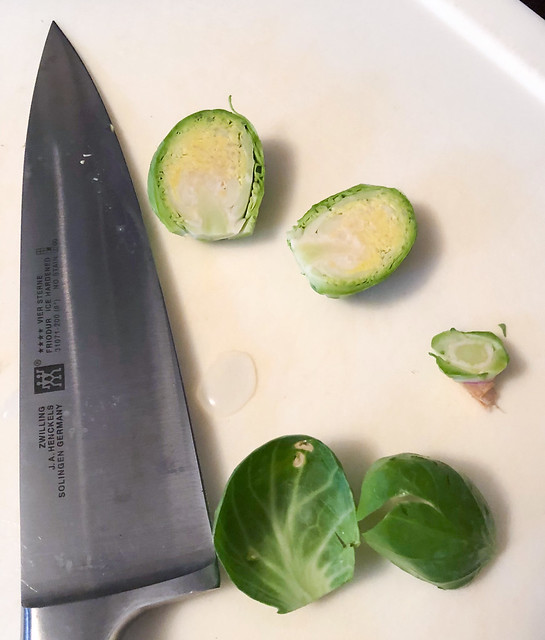 SLICE THEM IN HALF!!! I had to go to her photos to make sure she did this because… Duh, that is how you cook them.

This is why I photograph the steps of my recipes. Just in case I forget, people can see what I did. 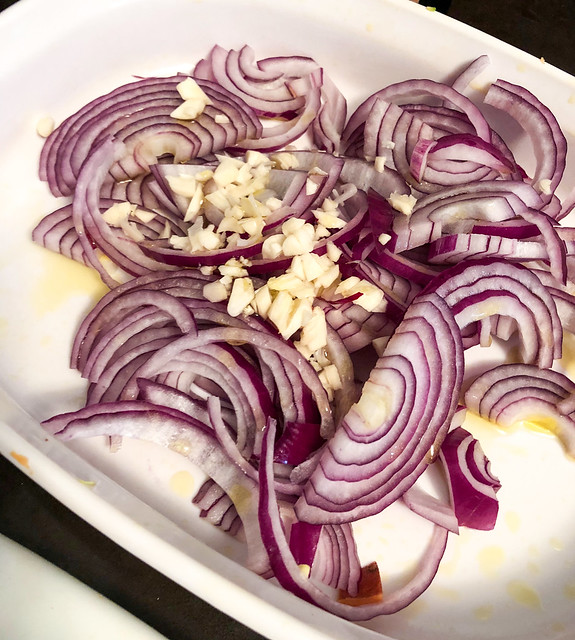 She also says to use a baking dish but no, for that many vegetables you need… 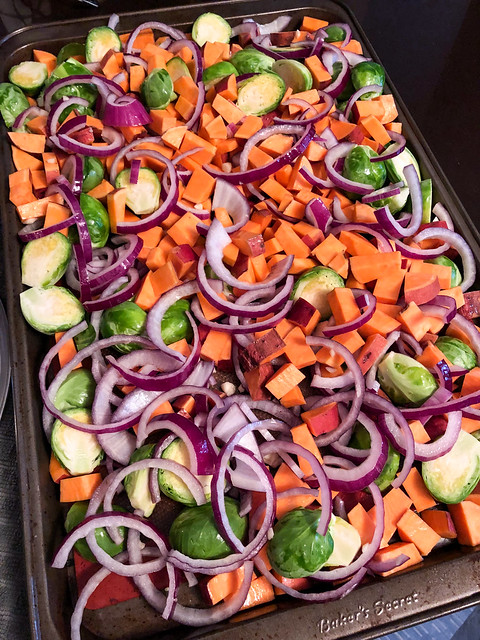 A baking sheet! This is basic recipe writing 101. Ugh! 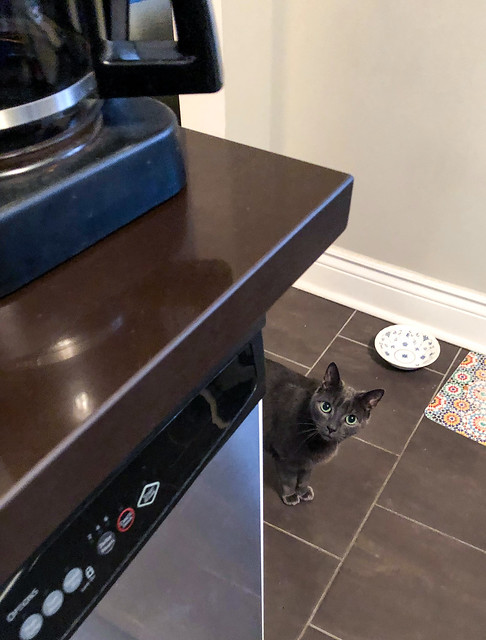 I think Escher picked up on my total recipe frustration by coming into the kitchen and giving me one little “be quiet” mew! Oh he is such a funny duck. 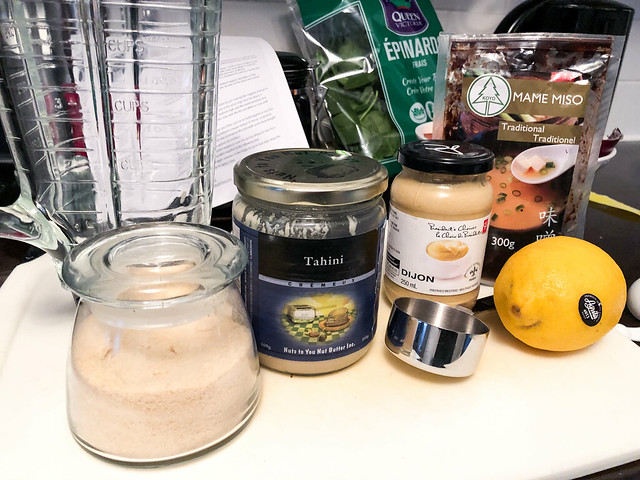 Pick Up Limes‘ genius is in her sauces. She actually does not season any of the food and I realized the reason why is there is a lot of sodium and umami flavour in her sauces. This ones uses tahini, miso, dijon mustard, lemon juice, onion powder… All good stuff. 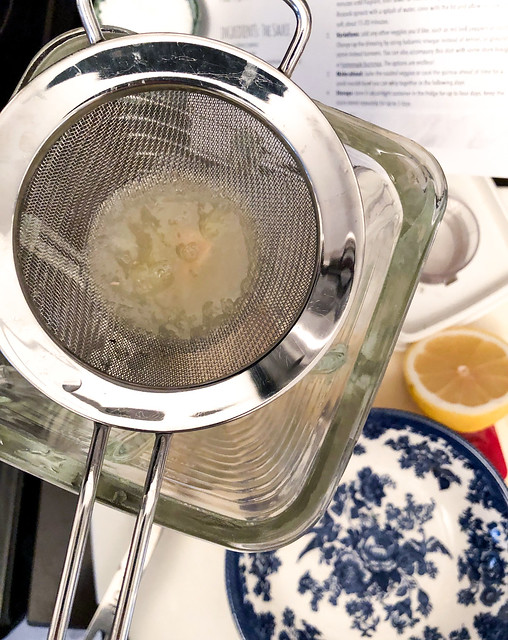 I wanted it nice and creamy so I made it in my blender since my food processor died. Sniff! 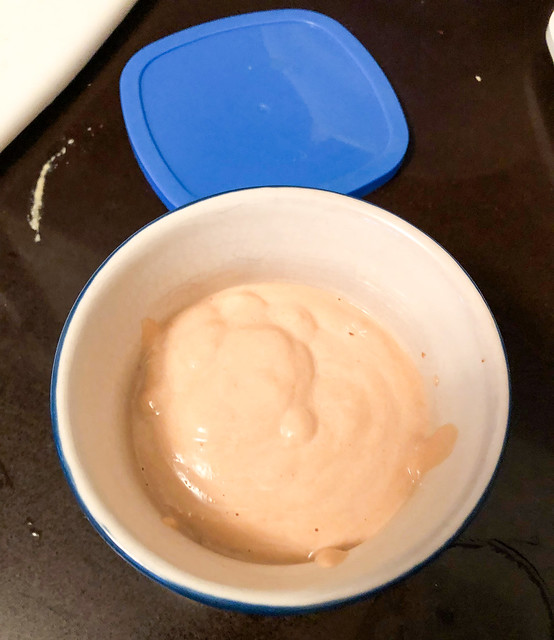 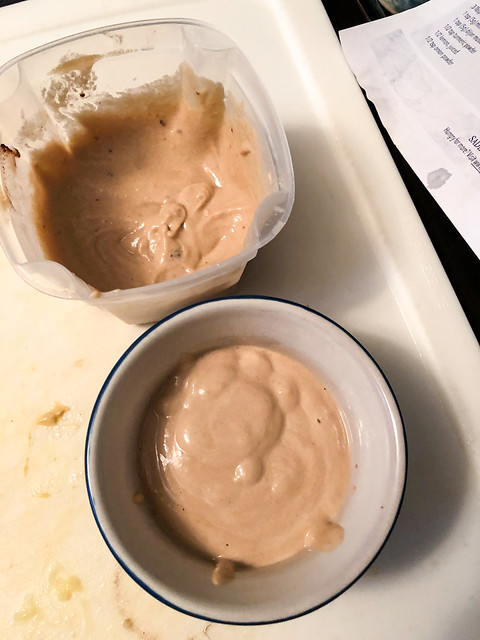 When I realized this I had already washed my blender by hand. I could not have not enough sauce! So I threw together another one by hand and it is a good thing I did. We definitely needed more. 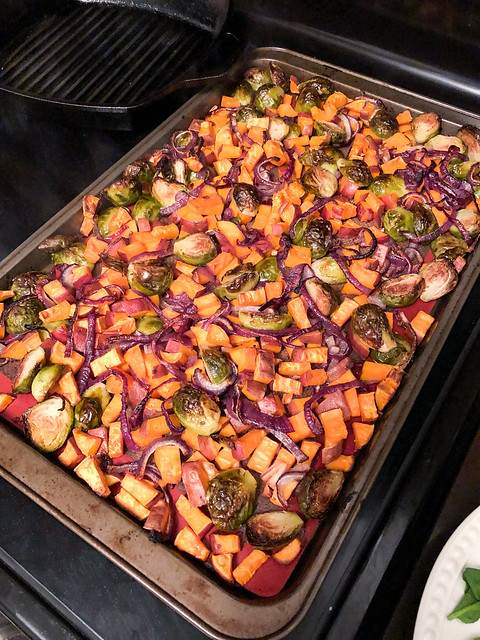 Well my sister wanted more veggies and this recipe delivers.

Prep time being 10 minutes? I don’t think so! All that cleaning, chopping and sauce making… You are looking at about 25 minutes for sure! 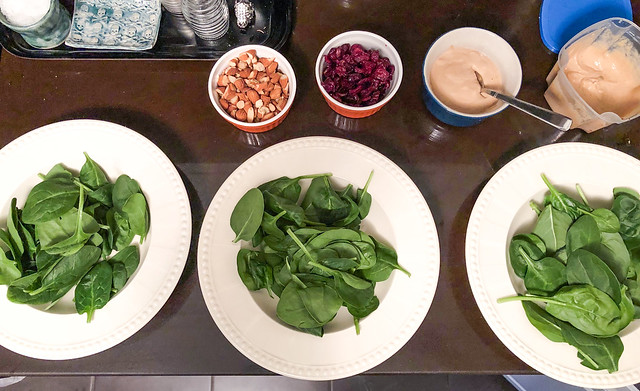 This salad does feed on a protein level because you get protein in the quinoa, the sauce and the chopped almonds. 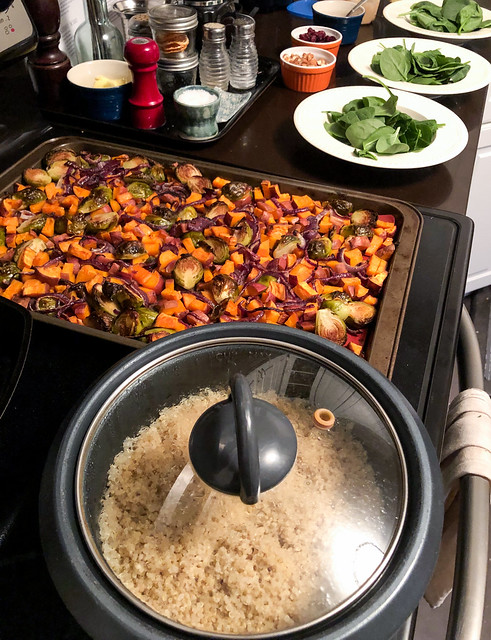 I really did not understand the idea behind nourish bowls until I had one for the first time out at a restaurant. The idea of a hot grain on top of greens with veggies just did not make sense to me but there is something very nourishing about it. 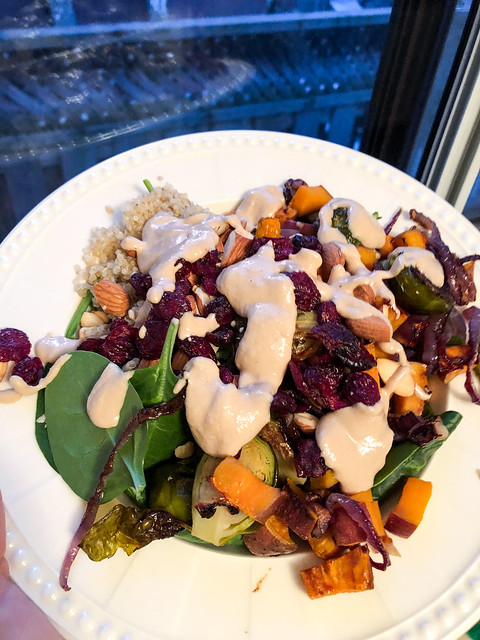 This really was delicious, especially hot out of the oven. 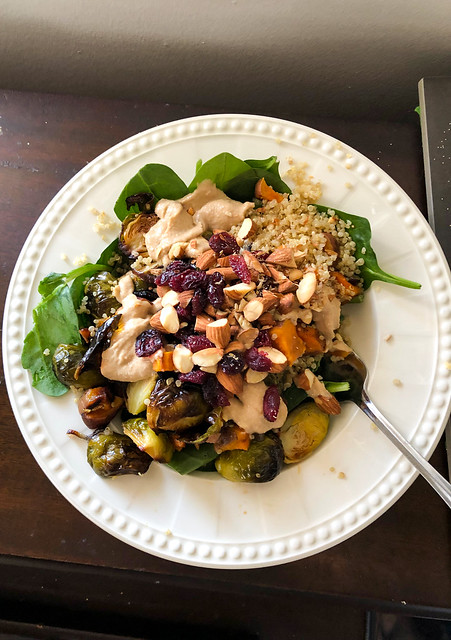 I found the vegetables sang more straight out of the oven than when reheated the next day for leftovers. 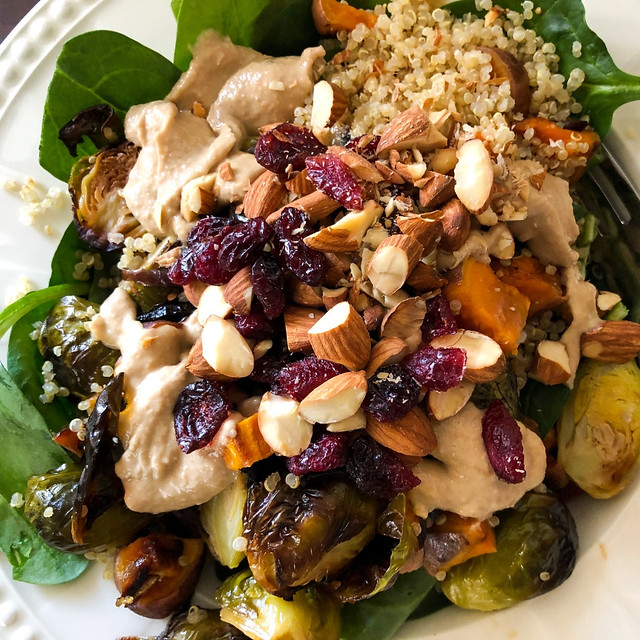 That said, Jamie LOVED this recipe! She said she could eat like this every day. Despite the crappy writing directions of the recipe, I found the meal very flavourful. However, like most vegan recipes, I was hungry soon after I ate this giant bowl. So I added meatballs to it after I took this photo and finally felt full.

Pick Up Limes knows her food. If I was to be vegan, which I am not but for argument’s sake, I would go to her first for recipe ideas. She knows how to boost flavour and add as much nutrition to a dish as possible without being boring. I like her site because there are no pop ups, no ads, it is clean and easy to navigate unlike 99% of other food blogs out there.

For meatless meals, she is who I will turn to but I will edit her recipes to make more sense. I give her Make Me Vegan approach four out of five wooden spoons.