I ventured on to making my third recipe attempt from The Unofficial Downton Abbey Cookbook by making the Spinach and Feta Salad with Fresh Beetroot. I was a little wary at first because I had not had a lot of success combining beets with feta but if I could like this salad, I would be very impressed with the cookbook. It was a good test.

When I started making the salad dressing using frozen orange juice concentrate, I wondered how often this ingredient would find its way into the pantry in Downton Abbey, LOL. 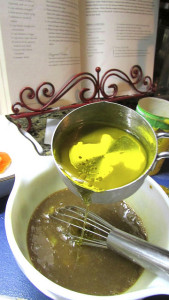 I had gone to a lot of effort to perfectly cook the beets. The feta alone cost me $7. As I started putting everything together I just had a bad feeling that I was not going to enjoy it as much the author claimed everyone at Downton Abbey would.

I took one bite and knew I was right. Beets and feta are just wrong together. I did not say anything and waited for Reg’s response. He immediately did not like it either and felt that it was just wrong. If only it had been goat cheese, this salad would have worked and I would have more confidence in the cookbook. 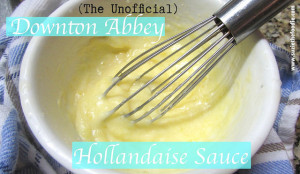 From the salty Hollandaise Sauce… 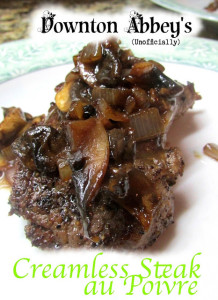 and then the yummy Creamless Steak au Poivre, this cookbook is not consistent. I want to believe in it. I want to feel that it is accurate to the time period but frozen orange concentrate? If the flavours had worked I could forgive it but after this crappy salad, I was done. I could not put more money, time and effort into The Unofficial Downton Abbey Cookbook.

The cookbook is $16.99 U.S. and $18.99 Canadian according to the back of the book. It is a trade paper paperback book with no photographs. I love unusual cookbooks that you have to bring your creative spirit, as long as there is some sort of payoff. Sadly, the witty introductions to the recipes are just not enough to lure me into the world of the Crawley’s kitchen.

My experience just did not convince me that I should go out and pick up lobsters for the Lobster Thermidor or make the Filet Mignon with Foie Gras and Truffle Sauce which is a shame because I wanted to. I wanted to believe in this cookbook enough to go out and invest in the ingredients and make these dream-come-true recipes.

There is an entertainment factor with this book that I thoroughly enjoyed but I just could not believe in the food. As a result, I can only give The Unofficial Downton Abbey Cookbook two and a half out of five wooden spoons. What a shame. I had high hopes for this one!