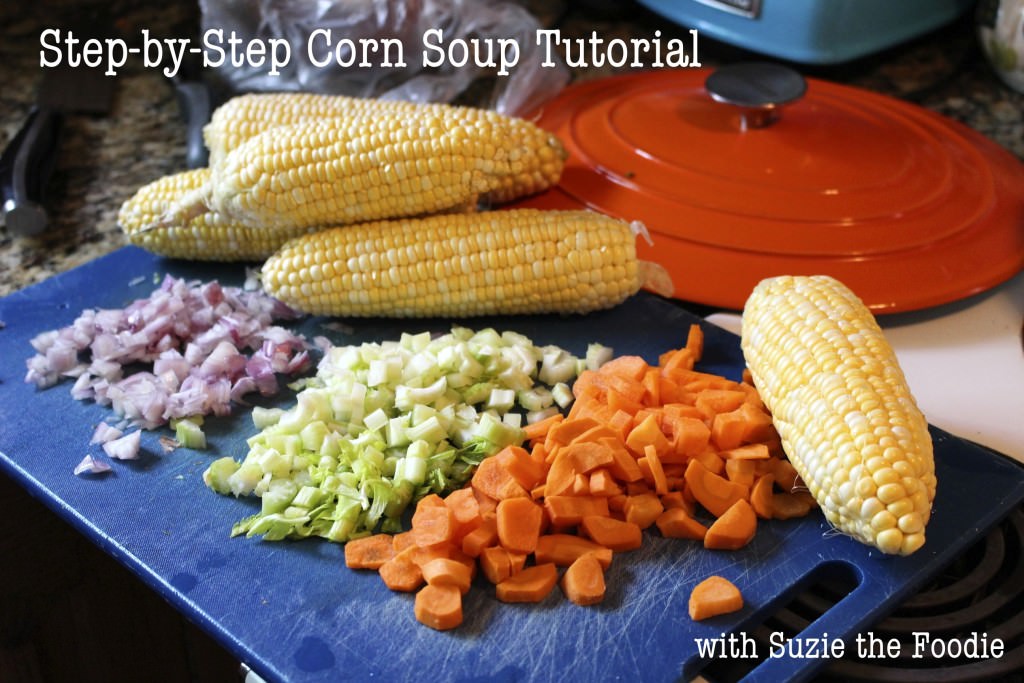 Soup-making season is upon us foodies! I thought I would do a refresher soup-making tutorial. You could absolutely turn this into a chowder by adding milk, cream, potatoes… It has been pretty warm here so I wanted to just try making corn soup but feel free to play! 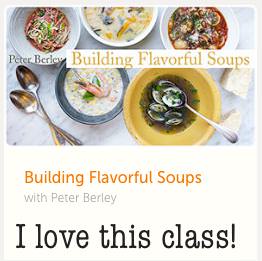 I absolutely enjoyed studying soup-making over the last winter by taking the Craftsy class Building Flavorful Soups with Peter Berley. I learned so much, especially about how garnishes can transform a bowl from good to “FABULOUS!!!” <—— Insert jazz hands. 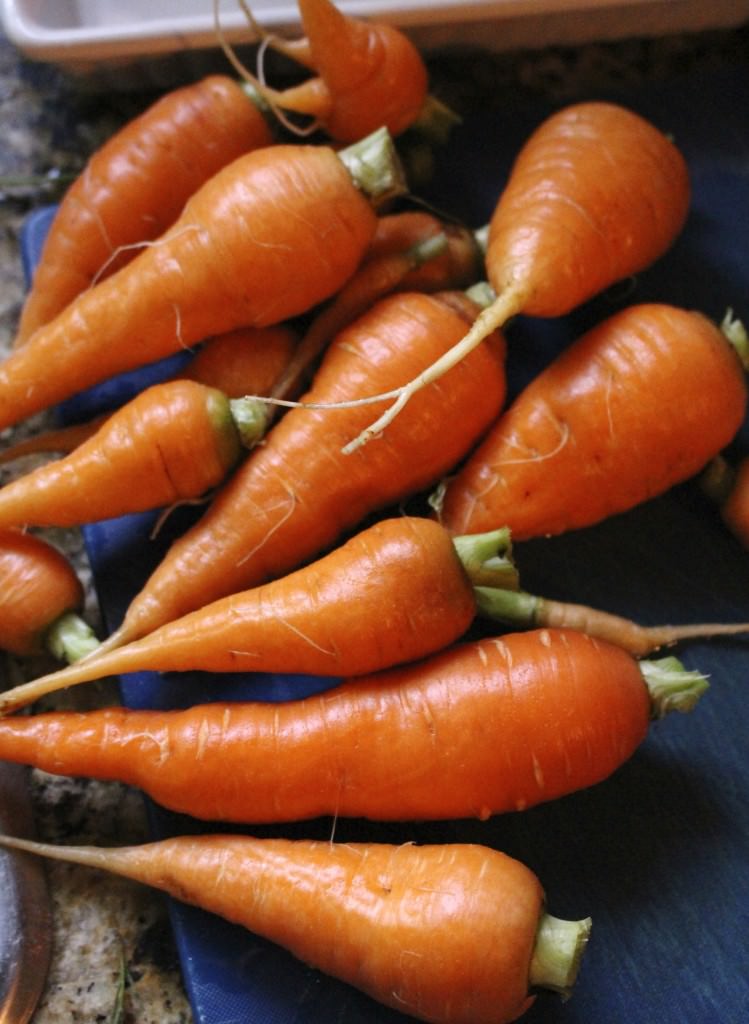 I was also inspired by our own little harvest of beautiful home-grown carrots. 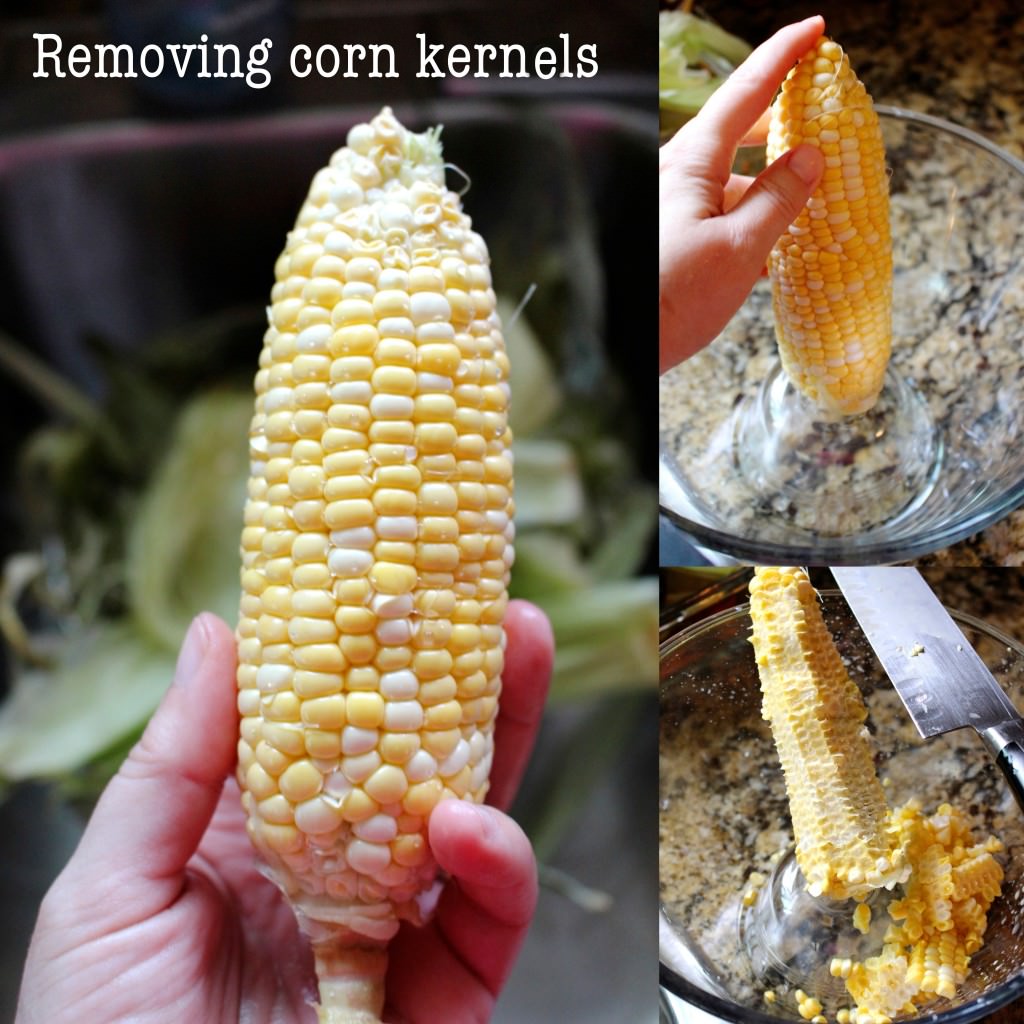 I had these beautiful locally grown cobs of corn and knew that I wanted to use them for a soup. I got out my tall glass bowl and put an inverted little bowl on the bottom. It needs to fit quite well or it will move around. I put the cob on the bowl and used a sharp knife to slice downwards to remove the kernels.

The great thing about this technique is it also gathers the cream of the corn too. Be careful though, this is always a messy and precarious thing to do. Of course you could always use frozen corn kernels instead. 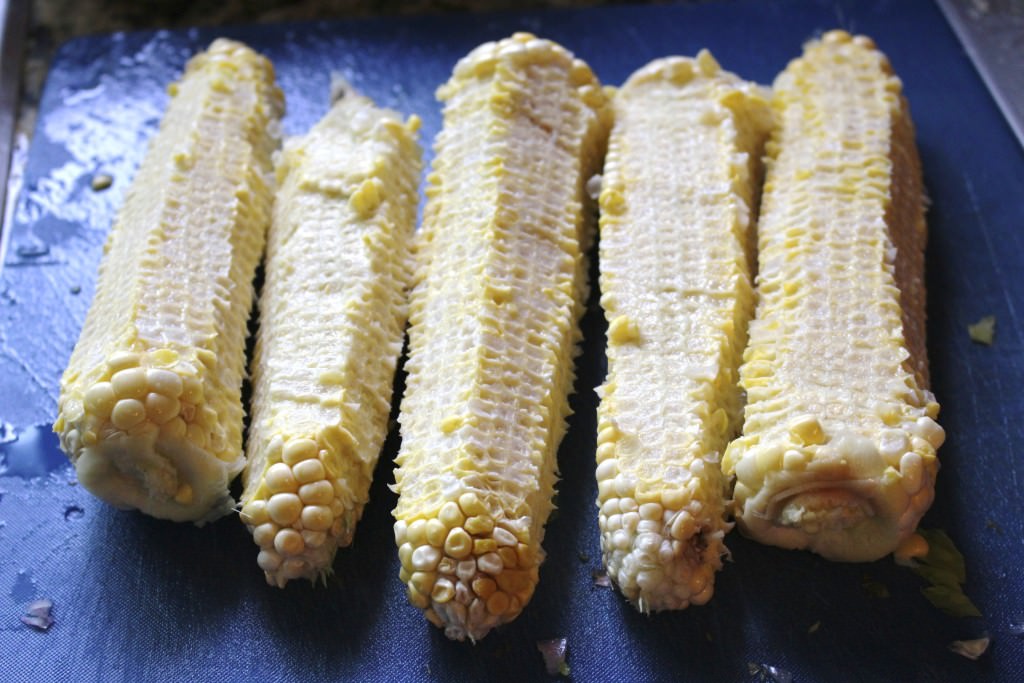 For this batch I de-kernelled five cobs. 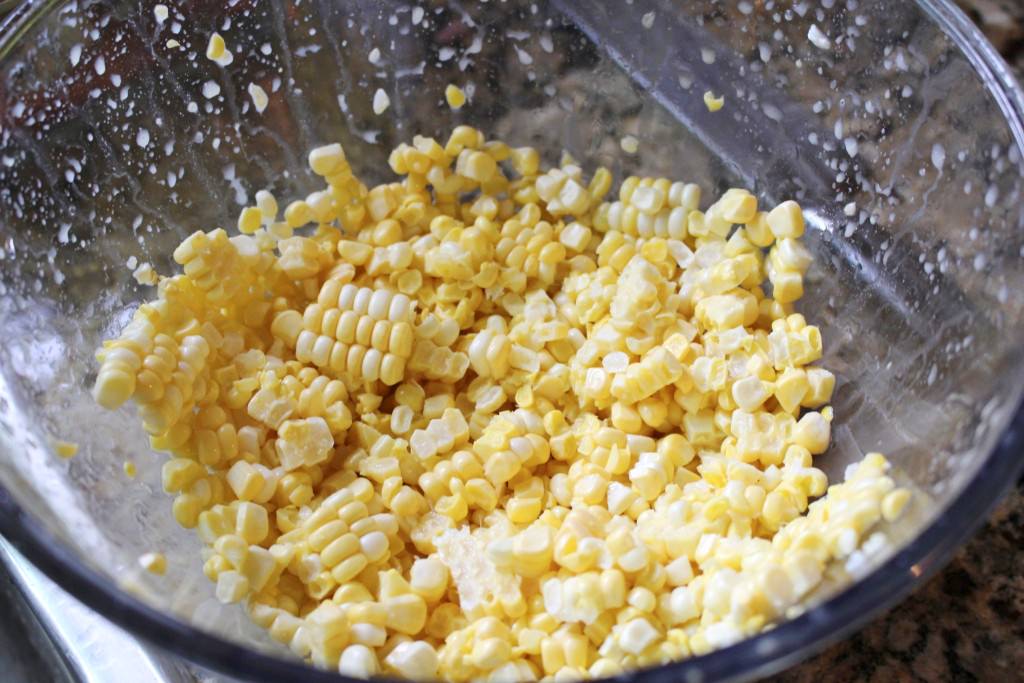 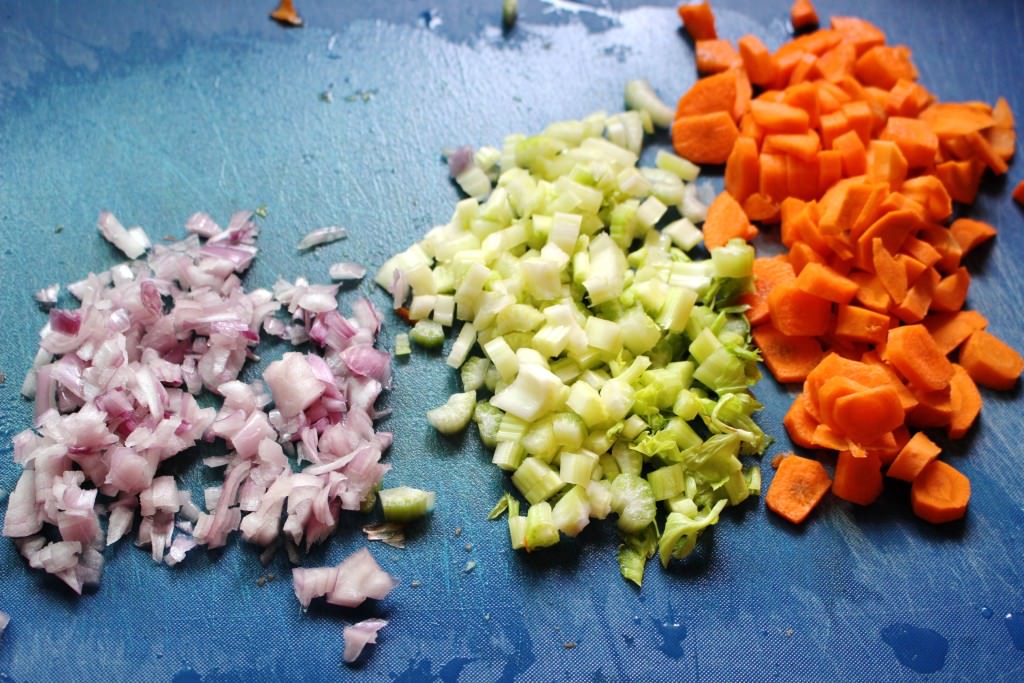 I used a shallot but you can always mince any kind of onion you want and mince equal parts celery and carrots. You will also need a minced garlic clove and a couple of bay leaves. If you want to throw in another fresh herb like thyme, feel free. It is YOUR soup! 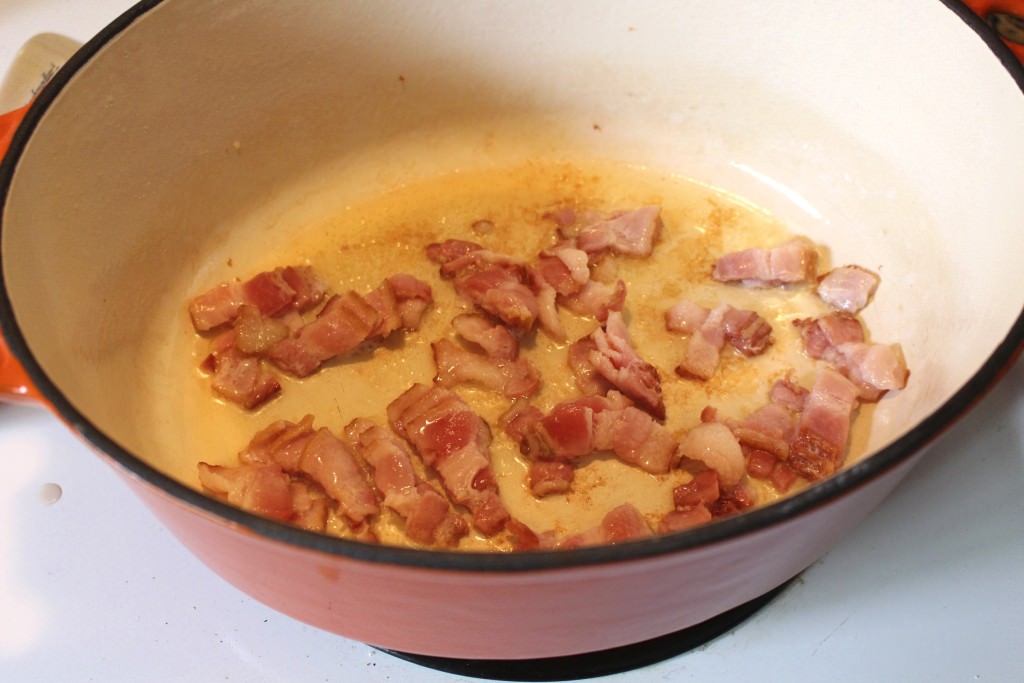 Because corn can be very sweet I wanted some smokey savoury flavour in there so I added some oil to a wide soup pot and added some chopped bacon. 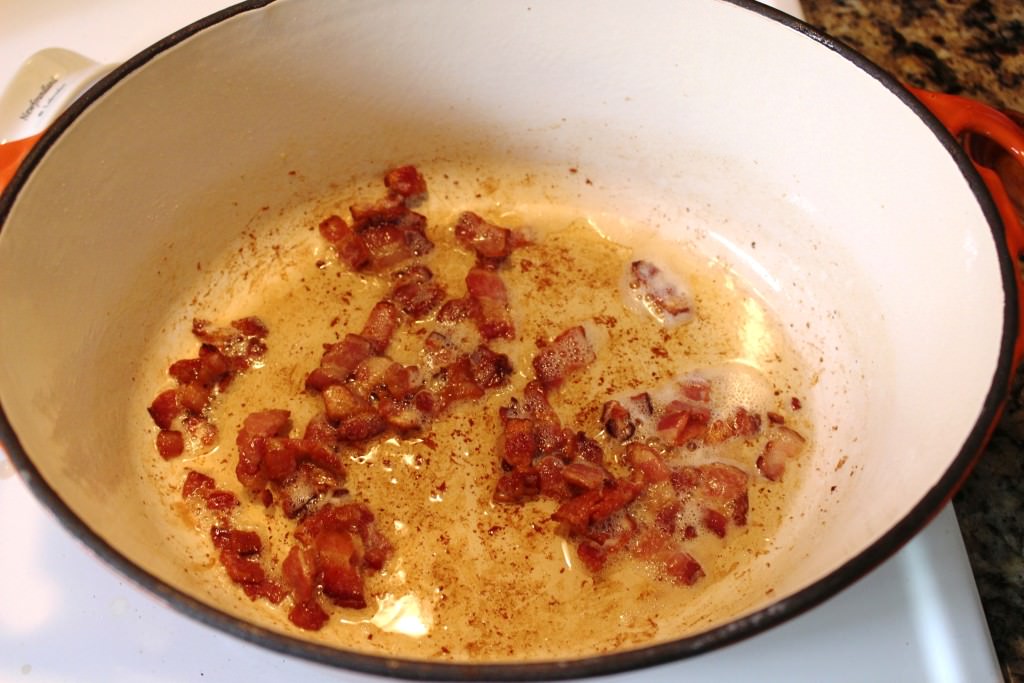 I cooked it until it was quite brown. I removed the bacon but left the oil. 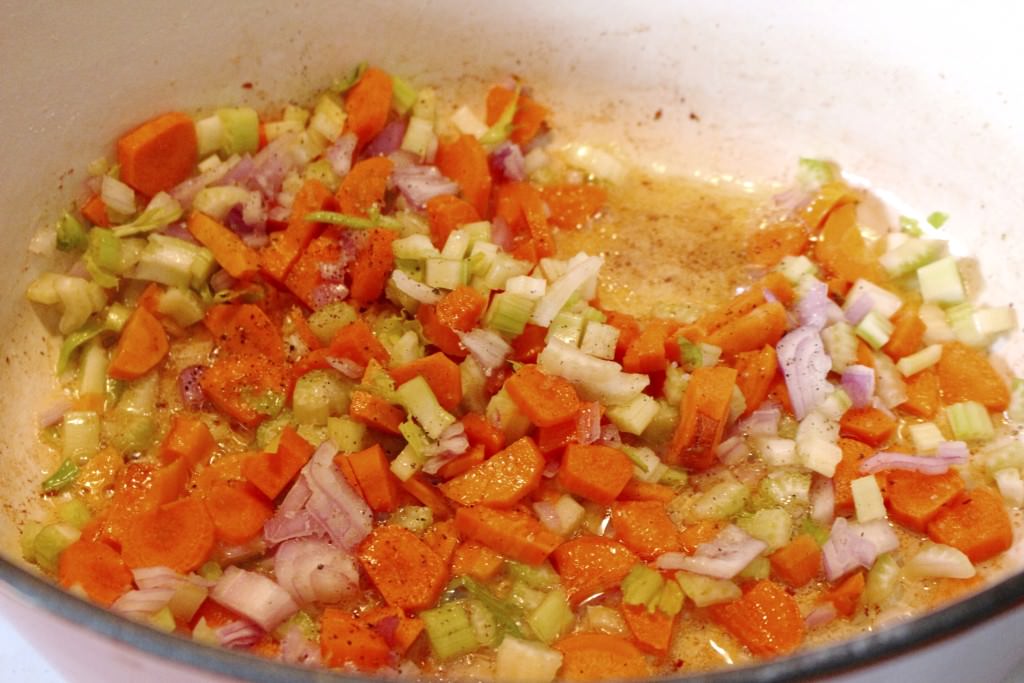 I added the shallot, celery and carrots and sprinkled with salt and pepper. I let them simmer over medium high heat for five minutes.  Add the minced garlic and stir until it becomes fragrant. 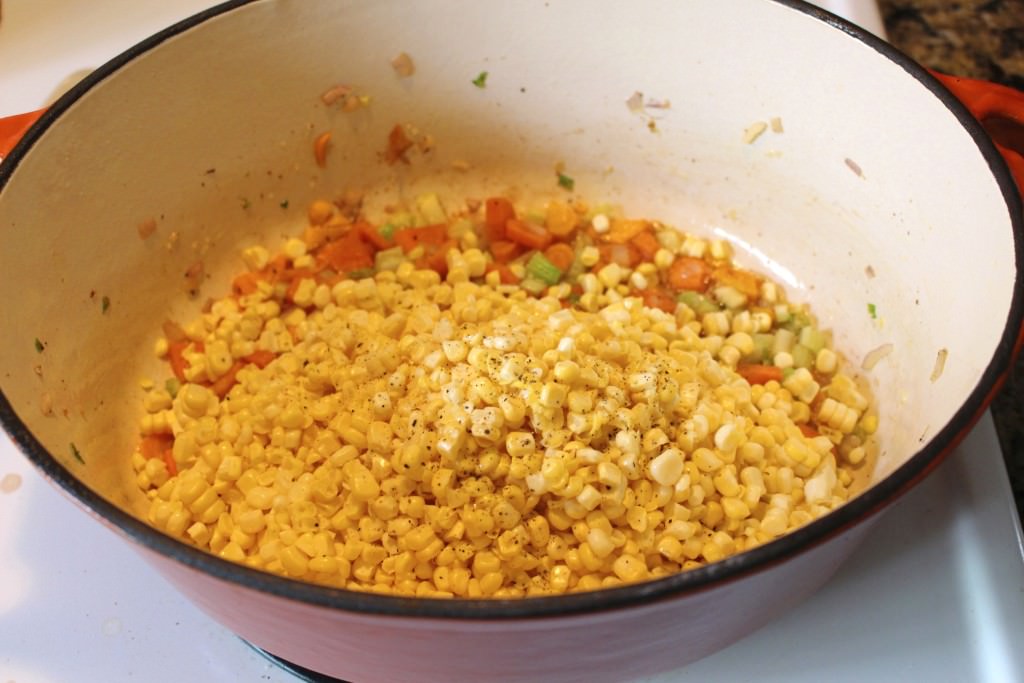 Then I added the corn and the corn milk. I seasoned with salt and pepper. (I like to season lightly as I go.) 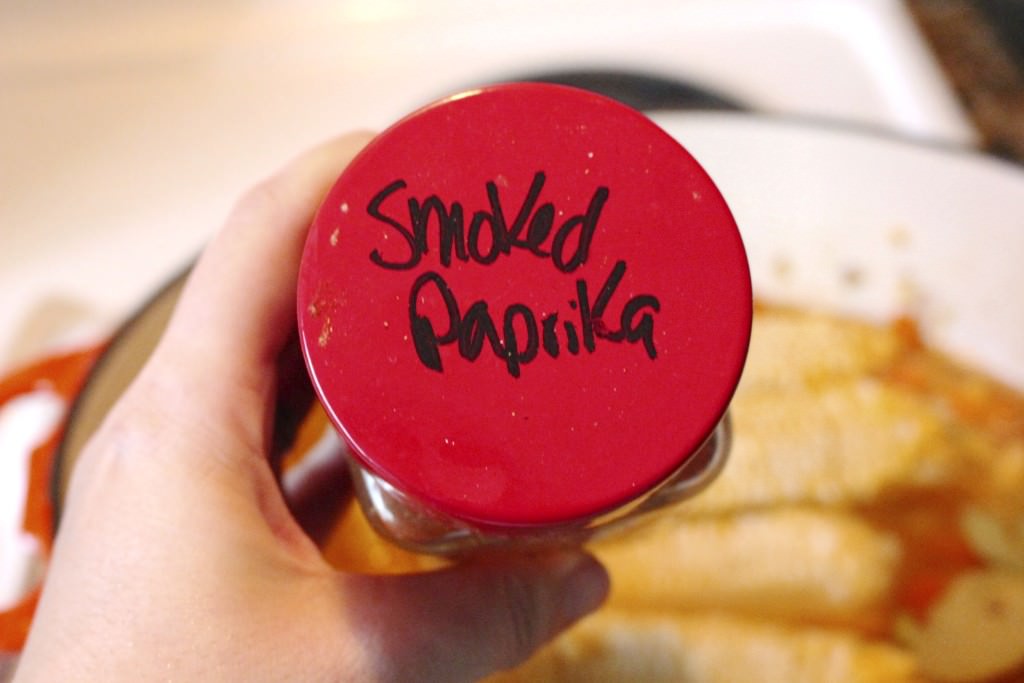 I decided to add a little colour and flavour by adding some smoked paprika. I think next time I will use a hot smoked paprika to give the soup some punch. 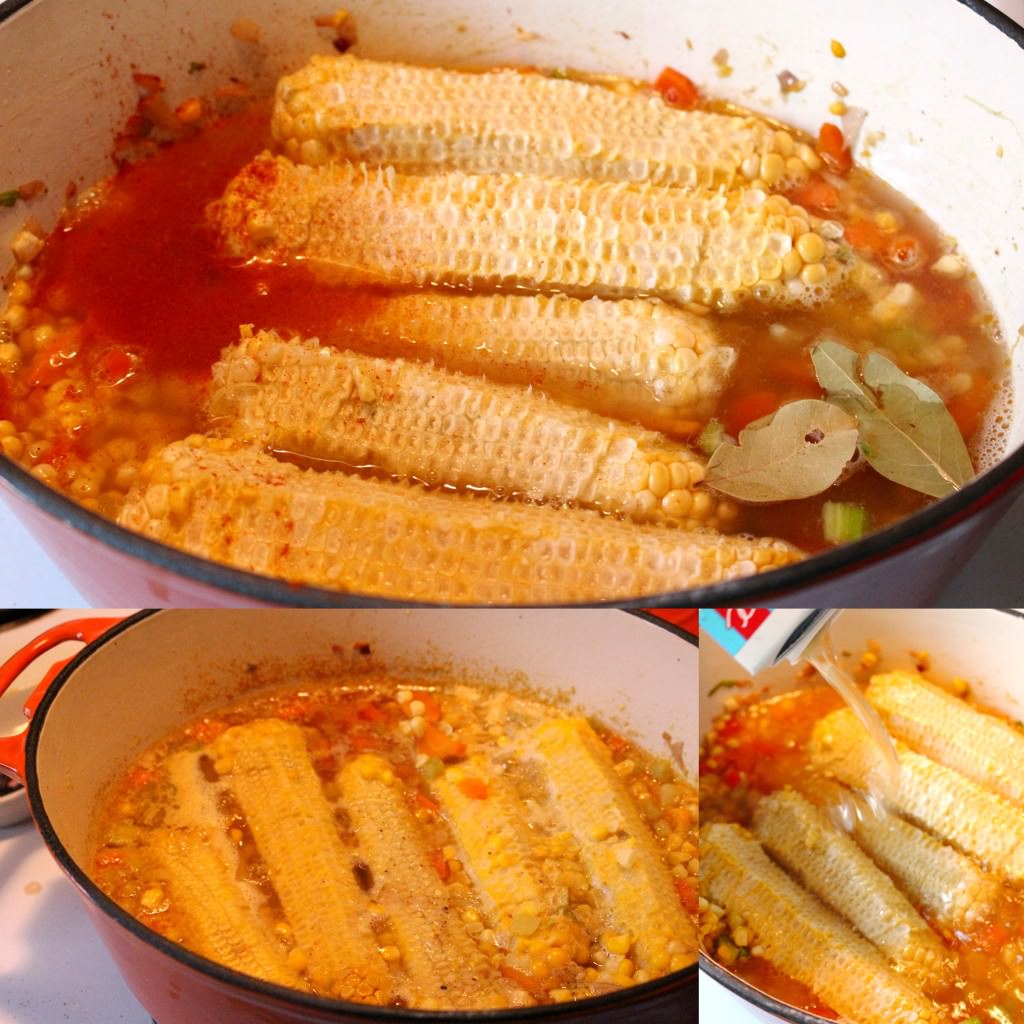 Then I added the bay leaves and corn cobs to try and get as much corn flavour out of them and into the soup as I could. I added enough chicken broth to just cover them and then let everything simmer.

If your soup is quite thin, remove the corn cobs when they look “done” and simmer down the soup. I like my soups to simmer from 20-40 minutes. 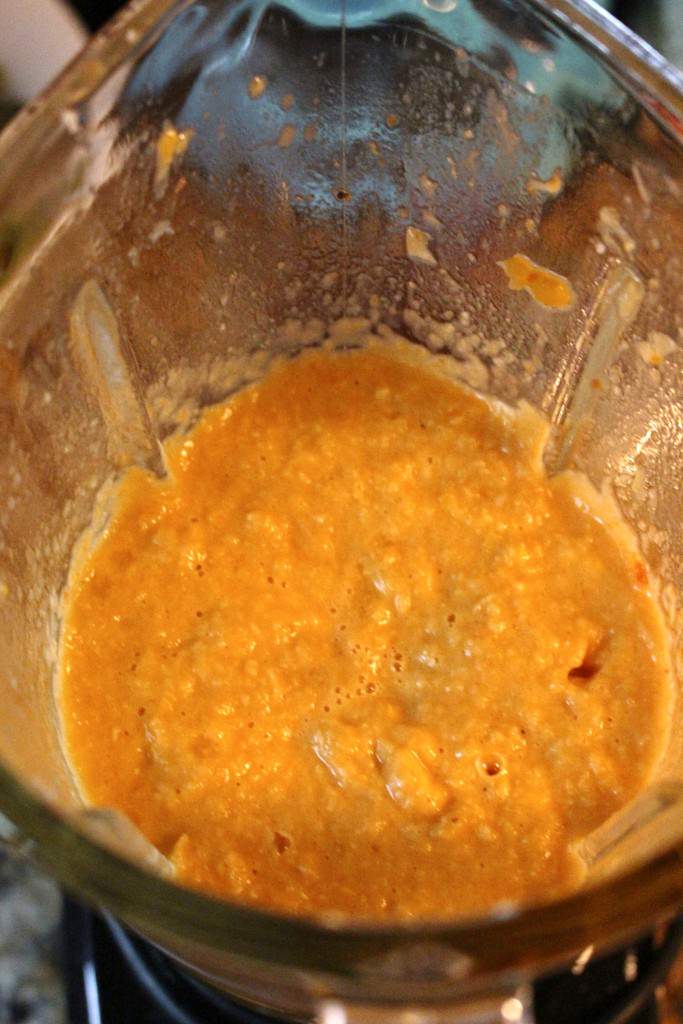 I like my soup to have some texture to it so I only pureed 3/4 of it in a blender. 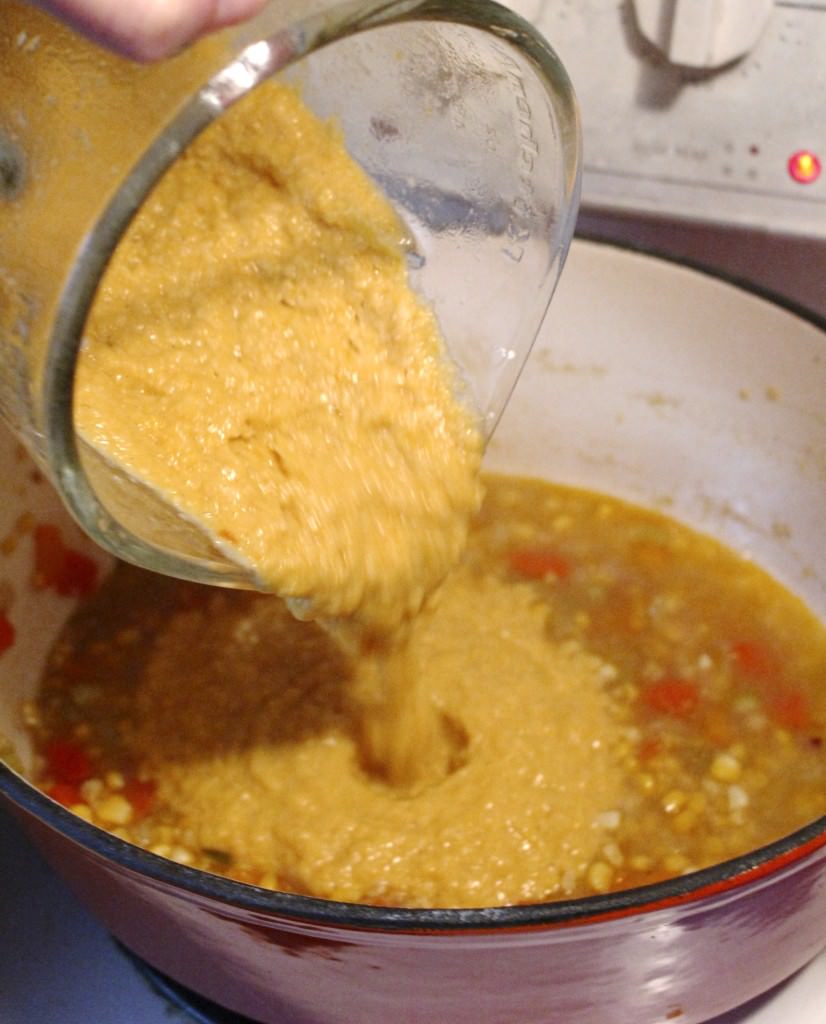 I added it back to the soup and heated through. Now comes the fun part! 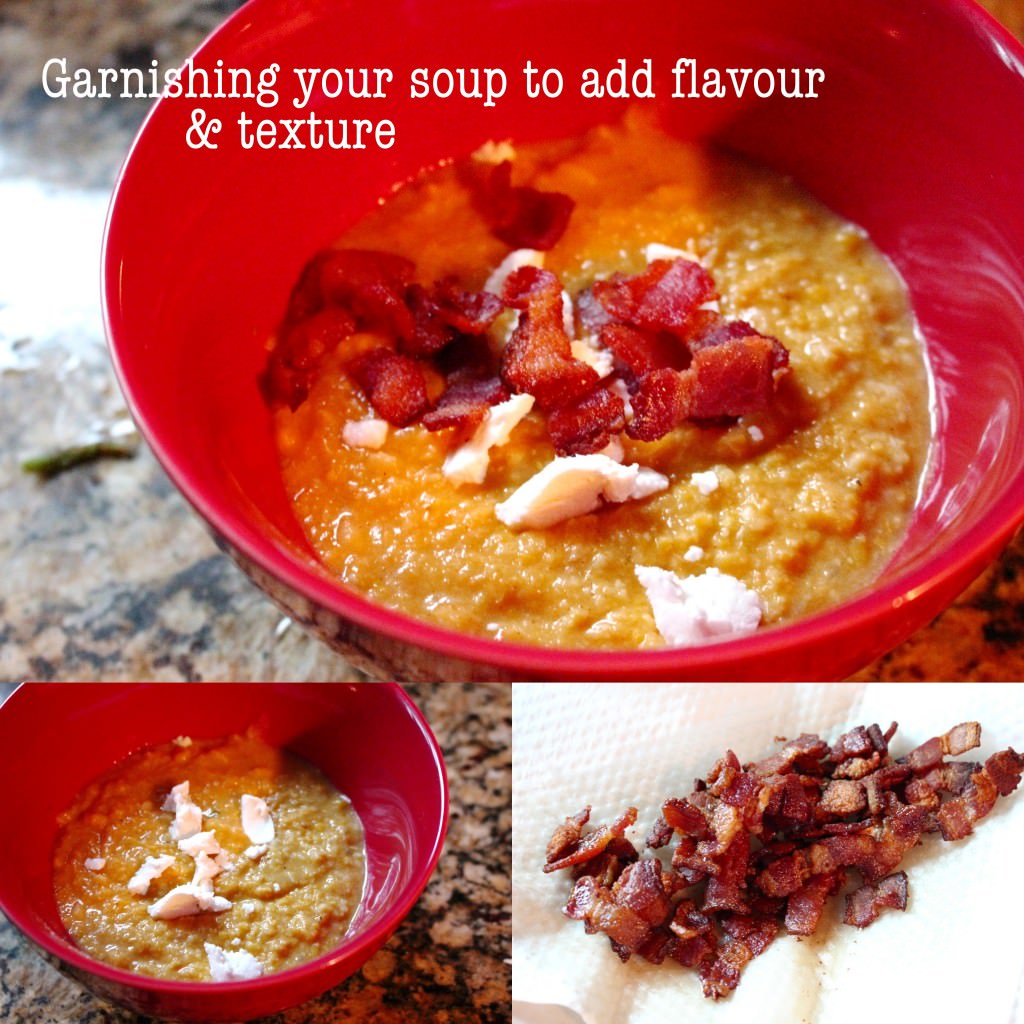 This soup had various incarnations. Because it was still sweet I added goat cheese and the bacon that I had cooked up.

You will notice that even though there was no thickener used for this soup it was still quite chowder-like without being very heavy. 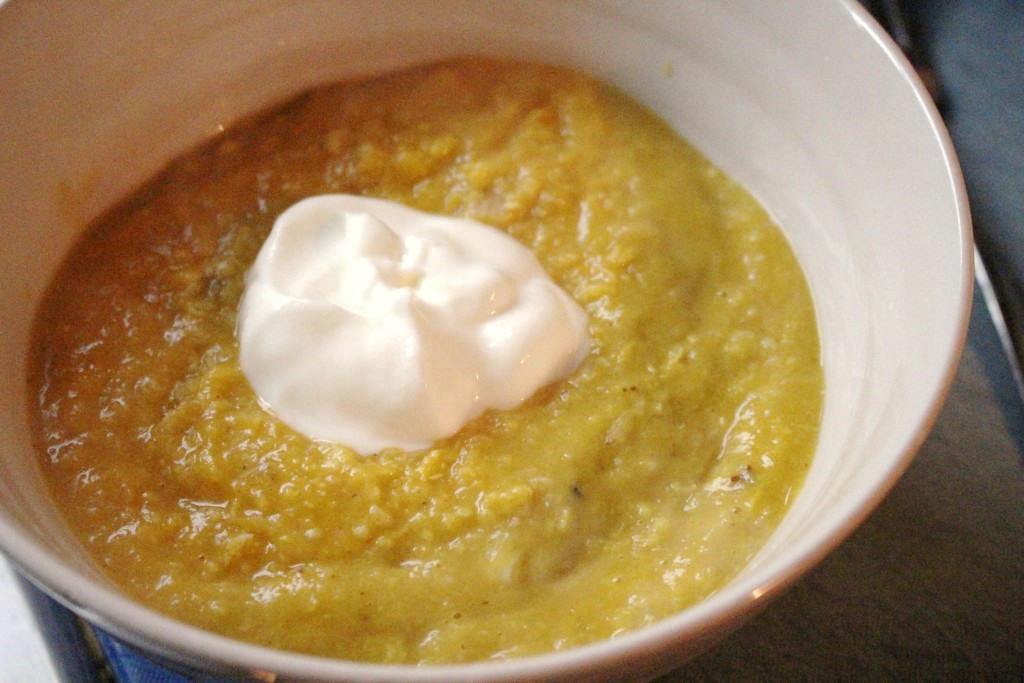 I had to stay true to my Latvian roots and also try it with a nice big dollops of sour cream. 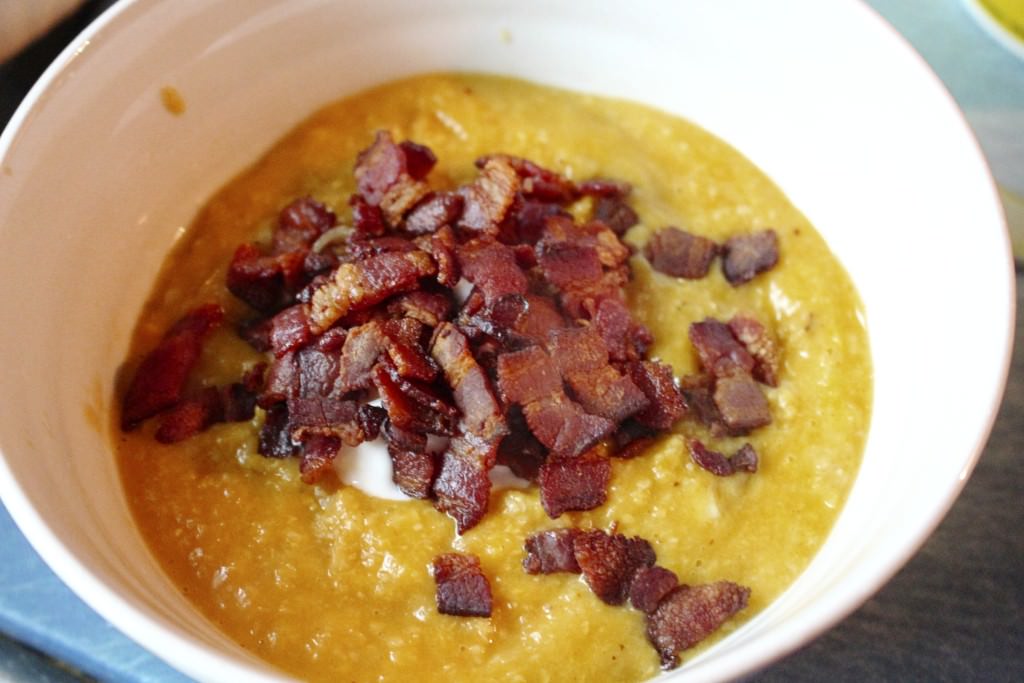 And a TON of bacon! LOL. 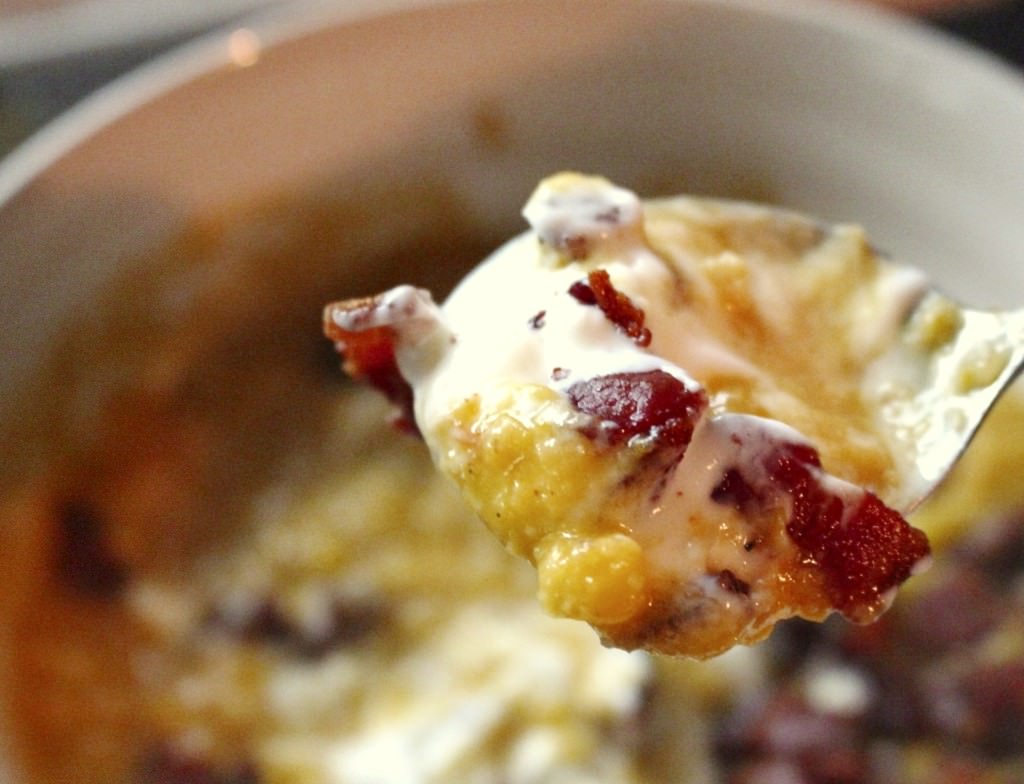 OMG, yum!!! Next time I also added green onion which cut down on the sweetness to add more balance to the soup.

This is just the beginning. So many soups to make! It is one of my favourite food groups to indulge in for most of the year. May the soup-making madness begin!