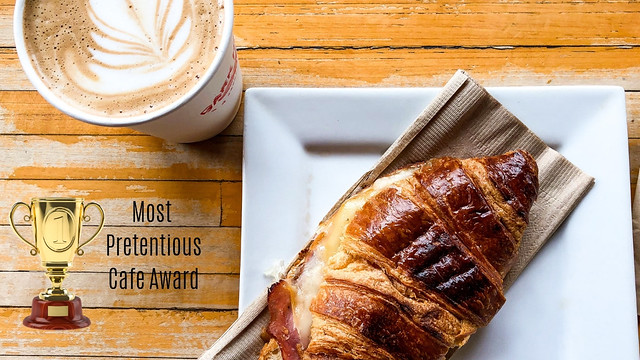 I give this 2018 Most Pretentious Cafe Award to Dark Horse Espresso Bar with a smile on my face. 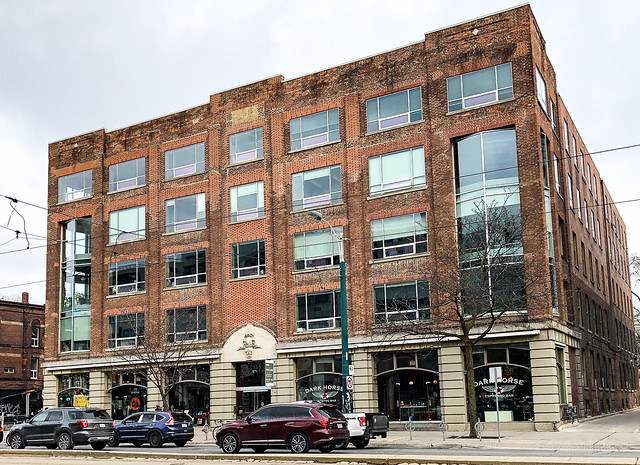 I walked into their 215 Spadina Ave Suite 102 location wearing a pretty typical Toronto outfit but I was also wearing my cupcake backpack. 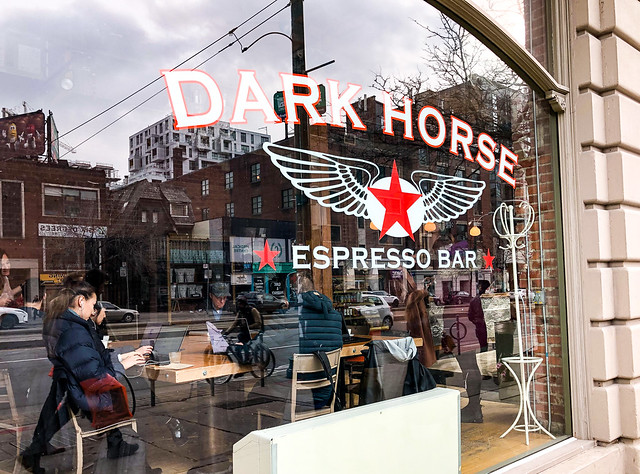 I was excited to be there because my sister Jamie had said it was very popular and that finding seating may not be easy. I was intrigued! 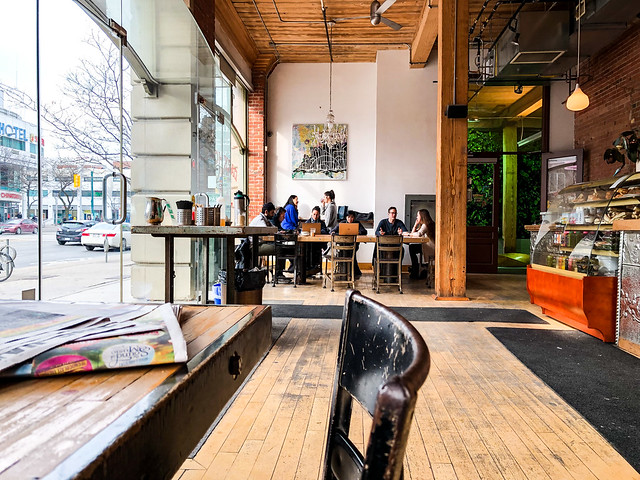 You walk in and it is all natural light (which I love) thanks to the huge windows. There is a chandelier above people’s heads but the place also had a very rustic feel. Perfect.

At the table photographed above on the left there were all these newspaper strewn across the giant table that was surrounded by men on their laptops and phones working on something clearly very important. The male hipster vibe was strong at this table.

I asked, “Is anyone sitting here?” before I moved all those papers and sat down. It was the polite thing to do.

The table had been perfectly quiet but everyone stopped what they were doing. Everyone looked displeased at being interrupted and no one looked me in the eyes. Nobody said a word. One man in particular looked disgusted with being disrupted by a lowly creature whose existence he would not deign to acknowledge before going back to work.

WTF? I have NEVER experienced anything quite like it before. I was quite shocked and entertained at the same time. This is exactly why Toronto gets a bad name. Well I wasn’t having any of it. 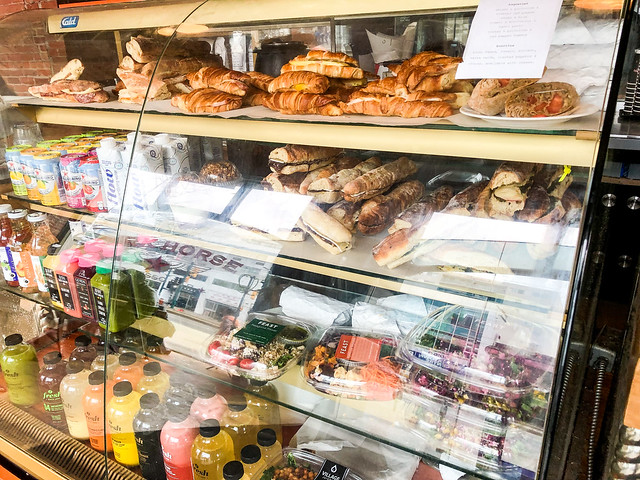 OK then… I put all my stuff including my obnoxious backpack on a chair and the table then went to order food. 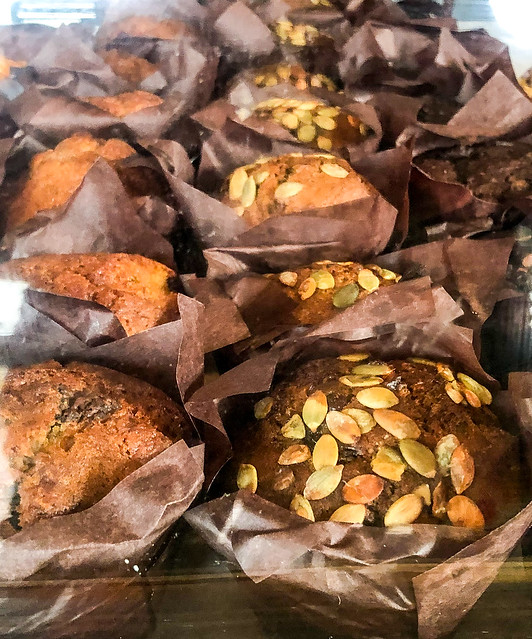 I knew I was going to be there for a while so I ordered a ham and cheese croissant, a decaf mocha and an almond turnover. 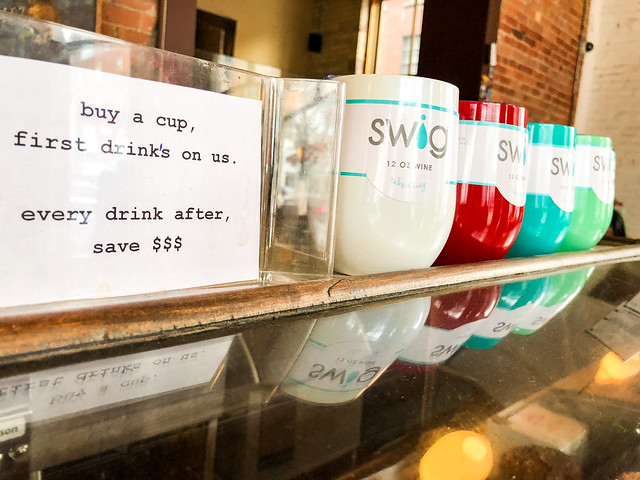 I paid, stood and waited for a while but I could not hear anything happening. 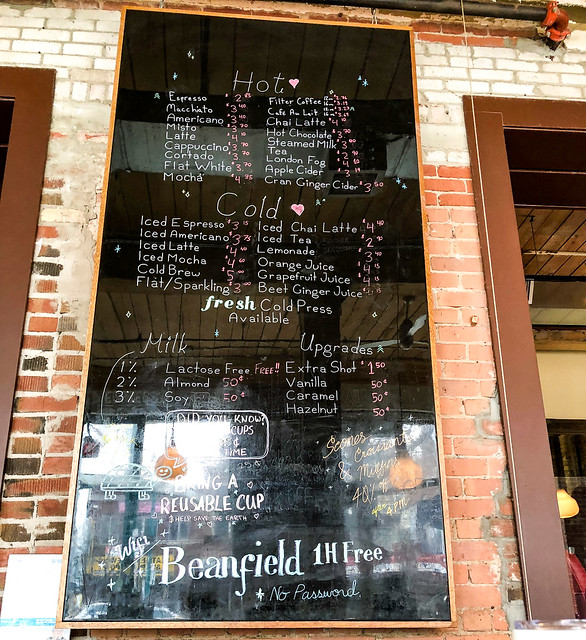 You know I care a lot about the environment and they have a whole section about bringing reusable cups and the waste of paper cups on their menu so I assumed that they would give me my mocha in a mug since I clearly was staying to have lunch. 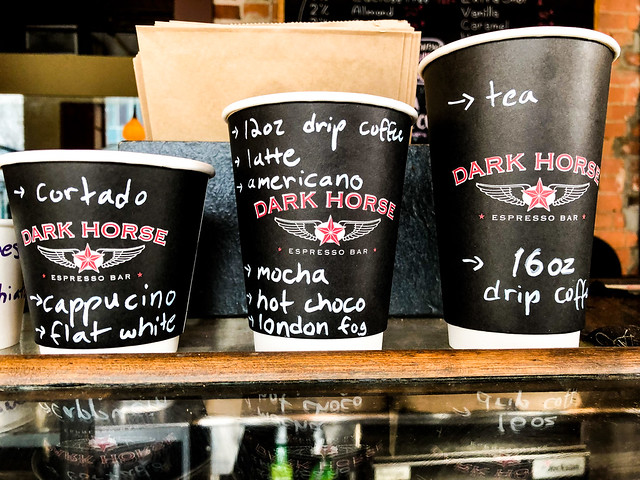 Also there is a flat fee for a mocha which also means a flat size of 12 ounces. And apparently for other drinks. Weird. Did they have mugs that held 12 ounces? 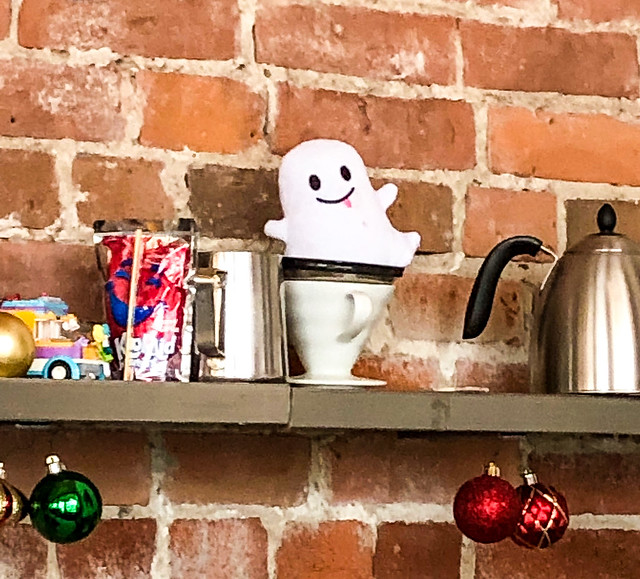 More time went by and I started to get annoyed despite this cute little ghost keeping me company. I sat down for a while… Nothing. Nobody seemed to be doing anything.

A new person came behind the counter so I went up to her and said, “I am checking on the status of my order.” You could tell from the shocked look on her face that nobody had done anything. My order (other than being handed the turnover in a paper bag) was completely either ignored or forgotten. She said she was on it and she did apologize profusely which I appreciated but at this point, was officially pissed off. 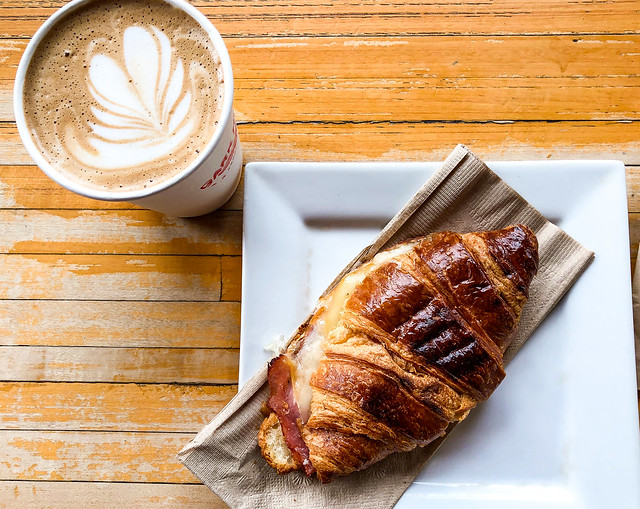 The day was now officially surreal. I looked forward to annoying the men around me. No one else was eating and everyone seemed to be nursing their lone black coffees as they delved into their work. I had other plans. 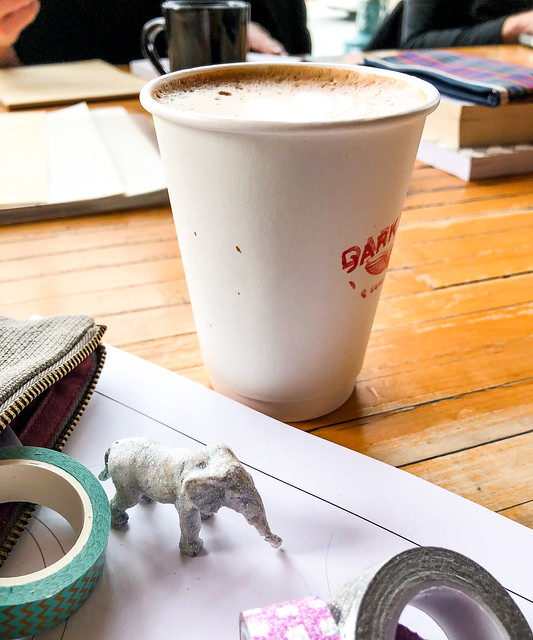 Notice I have a paper cup but that annoying asshole has a mug!

My sandwich was tasty but the pastry quite dry. The decaf mocha was excellent and I enjoyed it as I got out all sorts of arts and crafts supplies and started journalling amongst the macho men with a sparkly elephant by my side. I took all sorts of photographs of my food and my creative process and enjoyed my distracting revenge.

I was there at least half an hour with washi tape, glue sticks, pens, lots of paper… Creative revenge is a dish best served with glitter. 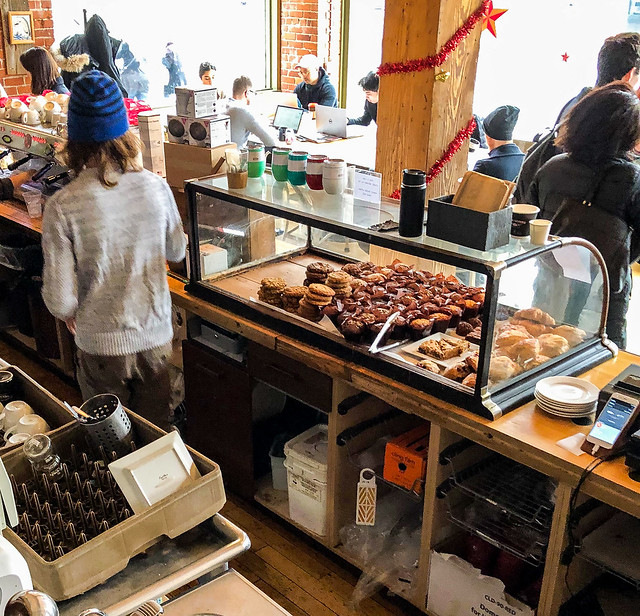 I did not want to finish my mocha and have my tart amongst those cranky people anymore and saw that there was a balcony behind the cash. I also noticed… The sound of voices! People were actually talking to each other up there. Much more interesting. 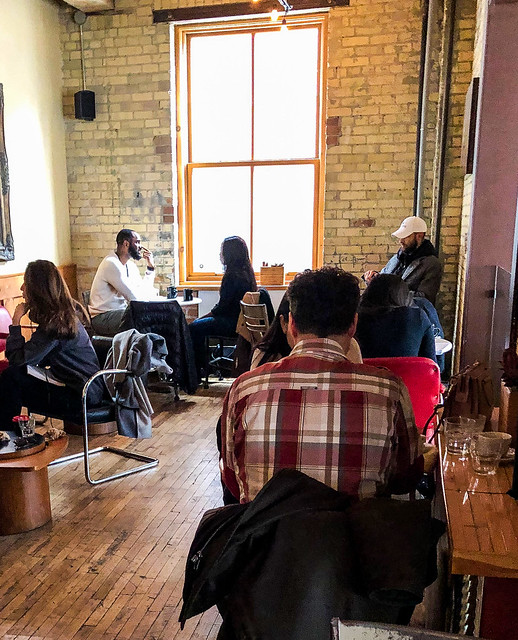 As I got up there a very nice young man was leaving and he said, “Yes! You can have the best table in the house!” What a sweetheart! I thanked him profusely and felt so much more comfortable up where there was conversation and no uptight assholes. 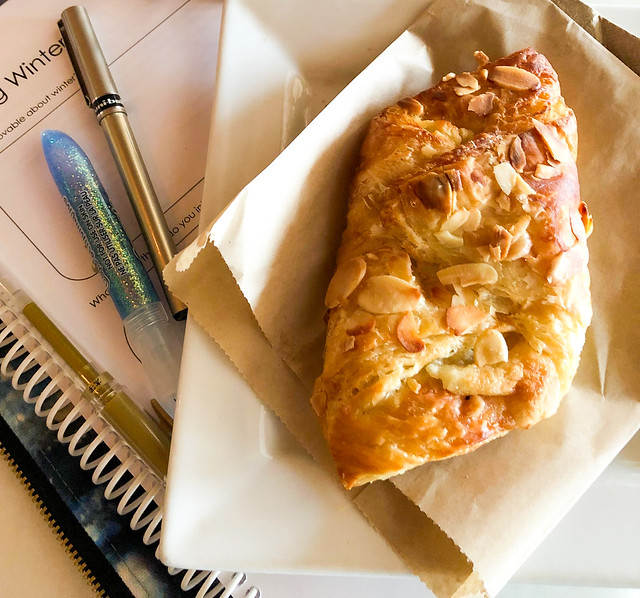 I felt much more at home above everyone down there who had treated me like crap as I ate my almond turnover. Again, the ends were very dry but the almond cream filling with the pastry was absolutely delicious.

I later found out that this espresso bar has a reputation for looking down at people who drink decaf coffee or coffee that is anything but black coffee. I do not know if that was the reason I was completely neglected after I paid $13 for my food and drink but honestly, there is no excuse. There was no one else in line at the time, they just did not fill my order and left me waiting indefinitely. Unforgivable.

This is also the first time I have done a review with the patrons in mind. Clearly the front of the house is reflective of the attitude of the location in their disgust of me breaking the silence in order to be polite. Thankfully the people at the back of the house were cheerful and friendly in spite of the espresso bar’s nasty attitude.

I left laughing. After all I have been through, these people can’t hurt me. But I… I can write reviews and tell my story of their crappy service and annoying clientele. Never underestimate a Torontonian wearing a cupcake backpack. She bites back and will eat you for breakfast with a smile on her face.