Reg and I have been on staycation AKA holed up at home avoiding the outside world at all cost. Especially the horrid weather. Thankfully on Valentine’s Day the sun came out and was supposed to be clear all day and night. It was the perfect opportunity to go to Cora’s for brunch. We were there early enough to avoid a big crowd at their Bedford location which was perfect, we almost had the whole place to ourselves. Here is Reg checking out the smoothie of the day which he ordered and loved. It had just about every fruit you can think of in it and came with a big wedge of pineapple. We always look at the menu but inevitably order the 1990s Harvest: cinnamon brioche French toast, 1 egg, bacon and a ton of fruit. This time they got my bacon perfect, extra extra crispy! I enjoyed a decaf coffee and we ate every bite off that giant plate of food. It was wonderful! To top it off, our server Xan gave us Valentine’s Day treats and even a heart-sticker which rocked. He was also totally OK with us taking photos and is a “selfie” photographer himself! We wanted to do dinner and a movie last night so we went to Burrito Jax and I got the sloppy pulled pork while wearing my homemade Jayne Hat from Firefly: 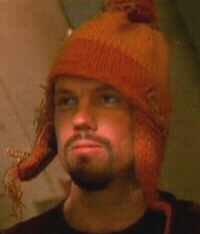 Everything was going great until we walked to the car and it started to snow. As we drove closer to the theatre, the worse it got. Remember, it was supposed to be clear. We wanted to go see the new Die Hard movie. People in the parking lot were driving like maniacs. My post traumatic stress kicked in. The more I thought about saying, screw it, just park and let’s go, the harder it snowed.

So, we went home. I was pissed. But I did not want to spend the rest of Valentine’s Day dead.

I made popcorn. We watched King of Nerds (which rocked) and then The Man with the Iron Fists which was so bad it offended me on so many different levels.

At least the food was good!

Honestly, life has been hell lately. February is when my chronic pain and fatigue kick my ass the hardest and poor Reg was stuck with a lump on the couch for a lot of his staycation. Still, not having to worry about him commuting through all those weather bombs was such a relief for me. It is also making a lot of the losses we will be going through this year a little more palatable.

I am done with being crushed by February.