You are here: Home / Netflix / Gilmore Girls, Tons of Takeout and Total Disappointment 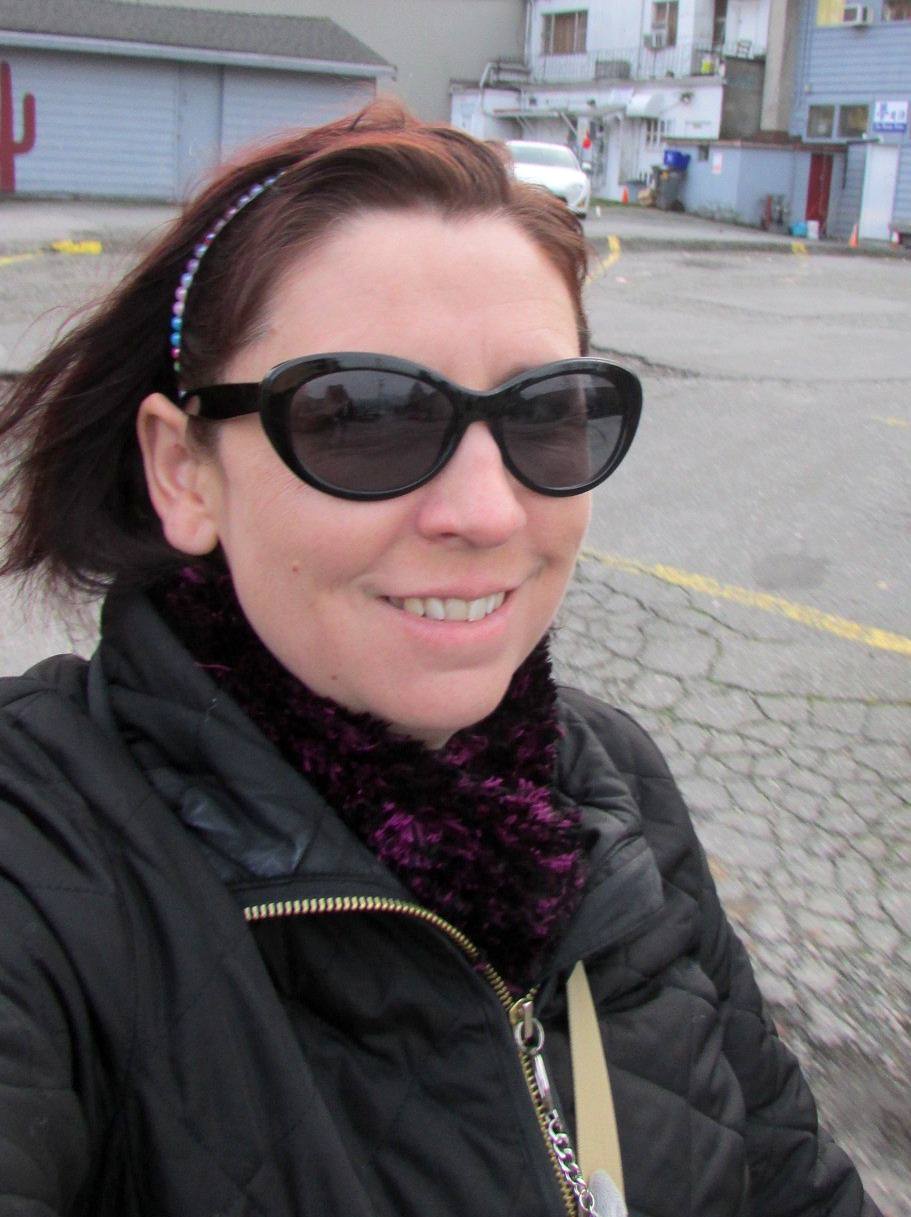 On my way to get takeout!

I was absolutely excited about the return of the Gilmore Girls, thanks to Netflix. The character Sookie was one of the main reasons why I not only watched the show but decided to learn how to really cook and bake. I was never a fan of Rory’s but Lorelai Gilmore rocked my world, always inspired me and made me wish I was a more witty individual. 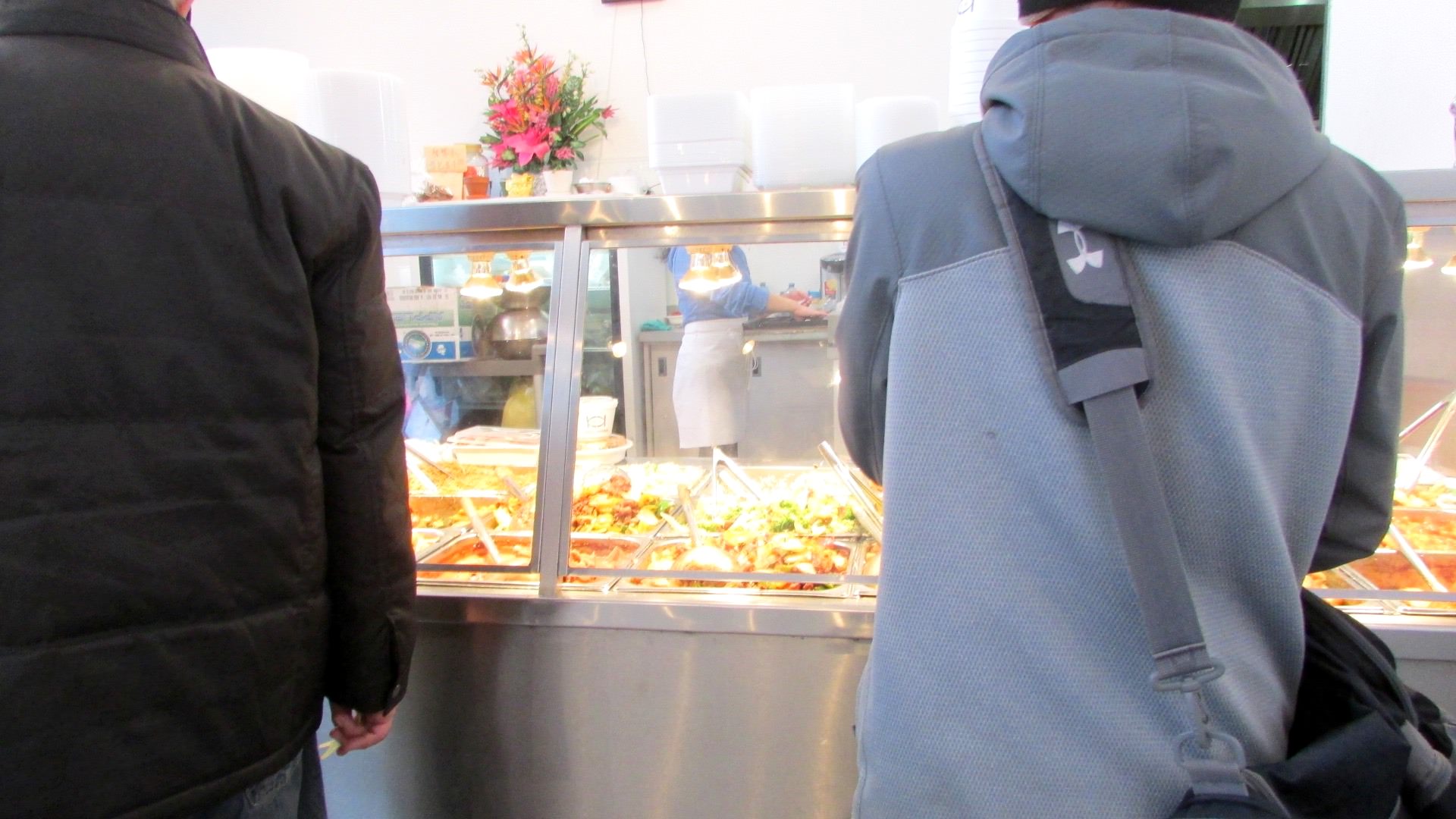 When the four episodes premiered on Netflix last week I went out and got a ton of takeout and even a McDonald’s milkshake in honour of the show.

I was all set. Rarely has there been a show that has embraced women eating takeout food (or drinking coffee) more. I was ready to be bad and have fun hanging out with my favourite mom and daughter duo. 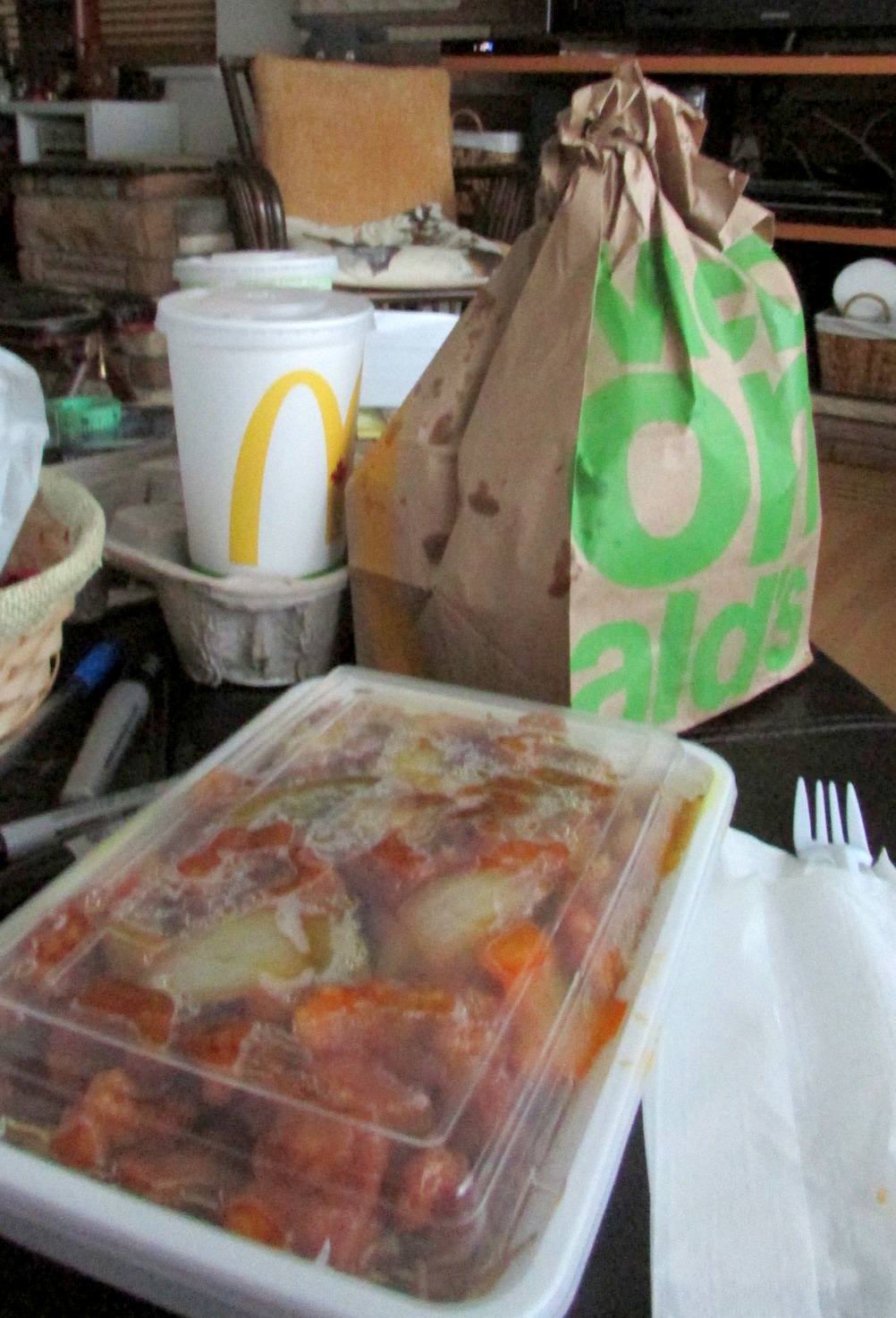 I watched Winter… Unimpressed. The acting felt forced, the subject matter of the death of the grandfather was so sad (understandably, of course) and where the hell was Sookie?

Over the weekend I watched the rest of the seasons of the Gilmore Girls (with much less junk food) and got more and more depressed. I hated the storyline. I personally turned on the show, from a lover to a hater, during the painfully long town play scene which just felt mean to us fans who normally would love the surreal Stars Hollow performances. But there we were with Lorelai saying, “What The Hell?!” All of a sudden the town that she (and we) loved turned into something she no longer understood, that no longer made her happy. I had to fast forward most of it, it was just too awful. 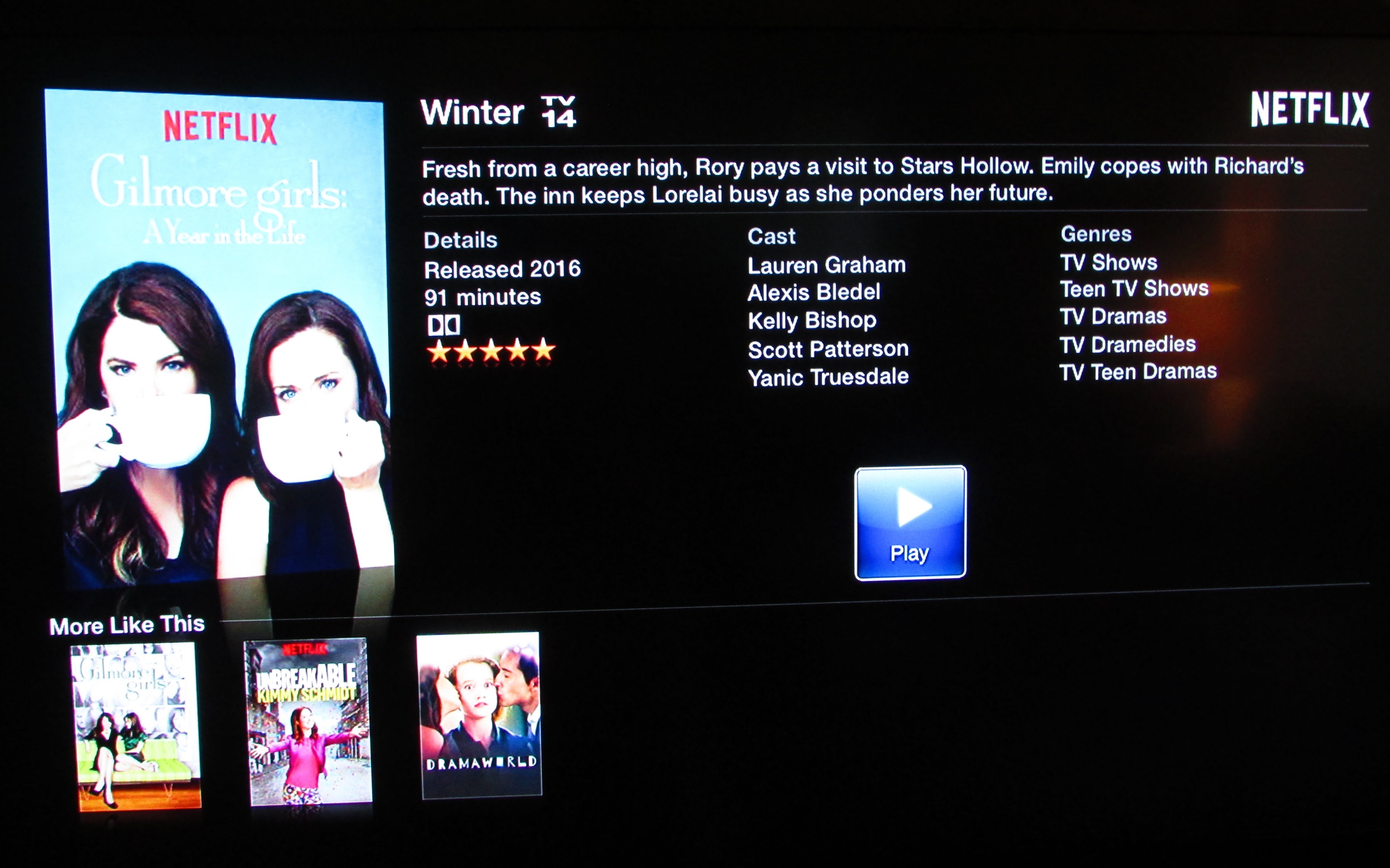 Lorelai’s attempt to run away and find herself was understandable but felt kind of cliche. Still, my desire for her to be happy was so strong I just wanted her to figure things out. By the time Sookie did finally show up I was so depressed, nothing could cheer me up. It also felt so unnatural for them to be back together again, like it was just too late. The magic was gone. Which made me even MORE depressed. Still, I am glad she made a cameo but that really is all it was. Sookie was such a central part of the show that making a dozen wedding cakes for Lorelai was just not enough. Not for me.

I tried really hard to ignore Rory’s part in this mini series, which I did for the last two seasons of the show. Logan has to be one of my least favourite characters of all time and her saying no to him when he proposes to her in the show finale was one of the highlights of television for me. Finally Rory did something right! So to see her back with him, cheating both on her boyfriend and being the other woman to his fiancé… Bloody Hell.

Yet it was her desire to tell her mother’s story as the subject for her book without any thought to how her mom would respond that pissed me off the most. Her lack of sympathy for her mom’s desire for privacy made my dislike of her character turn to hatred. It also clearly showed she has no identity of her own. Her big “reveal” at the end of the show made her all the more pathetic to me, not because of her situation but because she could not even come up with her own story. She just repeated her mother’s…. How original Rory! 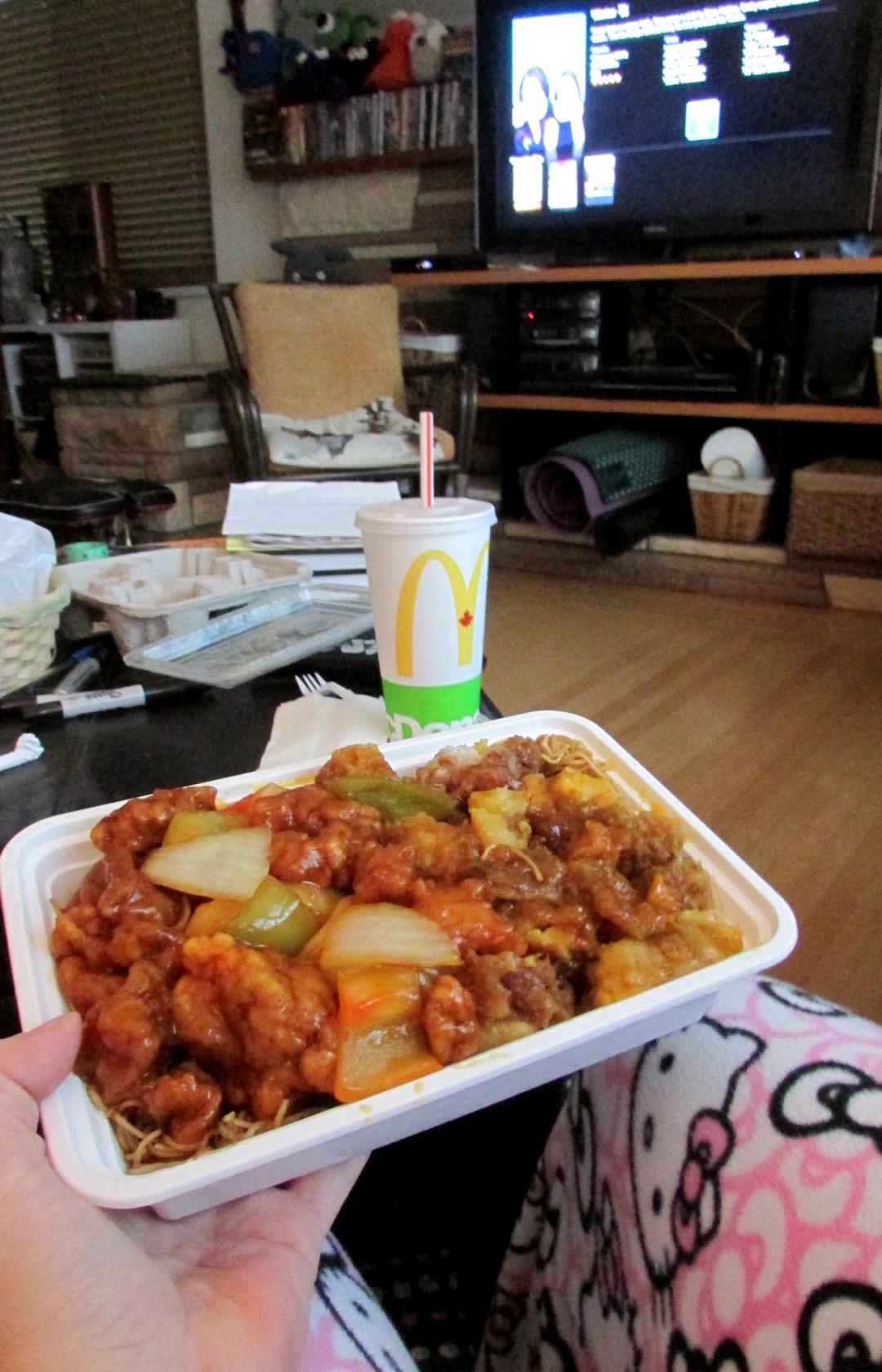 The only storyline I enjoyed was that of Emily’s, the one character I wanted to strangle on a regular basis during the many years I watched the show. She really steps into her own by the end of the year and her acceptance of Lorelai’s over-the-phone story of Richard was beautiful.

Still… Nine years and this is what we are given and now have to deal with emotionally? I wish I had never watched it. I had closure before and was happy for most of the characters. To come back and feel like Lorelai is being hurt by just about everyone she loves, not to mentioned abandoned, was downright cruel. I have no idea what they were trying to do with this story. Rory is pathetic. Lorelai’s worst fear about her daughter is realized…. But at least she finally got married!

Total bullshit. No amount of takeout food can make up for my disappointment. Netflix, you know I love you, but how could you? You ruined Gilmore Girls for me. My happy place is dead.