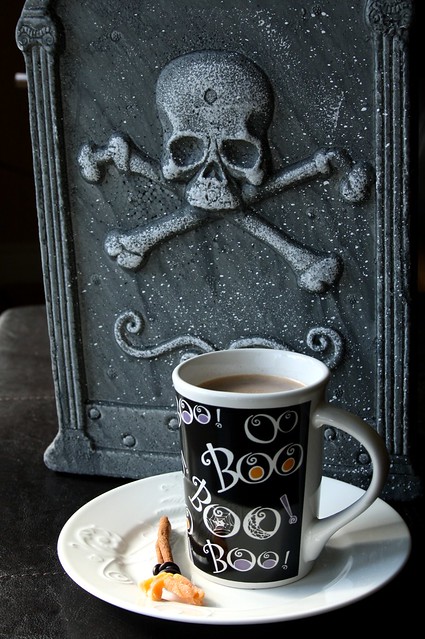 I was going to make Taste of Home’s version of a witch’s brew but after how challenging it was to make the accompanying witch’s broomstick, I decided to take some of their ideas and make my own homemade hot chocolate with a little kick. In a couple of tablespoons of water I added three Hot Tamale candies. The recipe called for red-hot candies, I figured they were the same thing. Turns out, I was wrong! My husband said they are the small heart-shaped candies you see Valentine’s Day. Oh well! I simmered the water for a few minutes until the red colour disappeared. The candies would not dissolve! I added 1 tsp of cocoa powder and stirred it in very well. Then I added in 2 tbsp of sugar and let it simmer until the sugar had dissolved. I filled up my “Boo” just shy of the top with milk and then whisked in to the mixture. I removed the undissolved candies. Then I added three Hershey’s kisses, whisking until mostly dissolved over low heat. This took a while but I wanted real chocolate in my hot chocolate. You could use dark chocolate or omit the “real” chocolate, using more cocoa powder instead. For a seriously low maintenance recipe, do as the original recipe recommends and just use hot chocolate mix instead. There was a slight spiciness to the hot chocolate which I liked. It was very subtle so I recommend using more Hot Tamales than I did or just forego the candy and use a little real cinnamon.

A very cute witch’s brew idea. I like the idea that witch’s prefer their hot beverages to have a little spicy punch to them!