Spooky! Spooky! Spooky! Haha! So much fun to be in my kitchen creating these Halloween treats yesterday. This is the recipe I used as a guideline for these eyeballs, Taste of Home’s Scary Eyeballs. 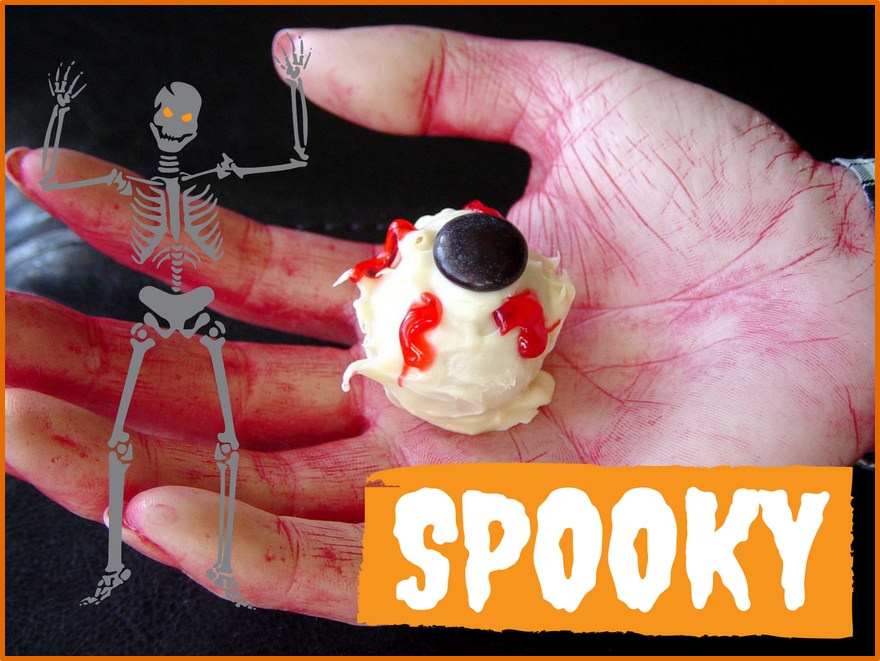 I choose this recipe because it was not very difficult and even though I did not have white candy coating, I decided to just use white chocolate instead and see what happens. As you can see, the eyeballs still look pretty darn real! In a small bowl, cream peanut butter and butter until light and fluffy. Beat in vanilla. Gradually beat in confectioners’ sugar. Shape into 1-in. balls. Cover and refrigerate for at least 30 minutes.

I only did half a batch, the original recipe makes 40 eyeballs which is way too many for this experiment and it easily divided in half. In my mixer I creamed the peanut butter, softened butter and vanilla together. Then I gradually added the icing sugar and using my mini scoop, I divided the portions evenly and with my hands rolled them into a ball. The original recipe calls for shortening to be melted with the white candy coating and so I did not know if the 12 oz white chocolate would also require it but it did, perhaps even more. I just kept adding it until it was smooth and looked liked it would adhere to the peanut butter balls. I melted everything very, very slowly and gently over barely simmering water. White chocolate is super sensitive, take your time: Here is the assembly line! I dunked the balls into the white chocolate/shortening mixture and then put them on parchment and topped them with a Smartie: I used mostly the brown ones, probably should have gotten the M&Ms but was not convinced that they were completely logo free. Worked out just fine. Then I added red squiggly lines with from a tube of red decorating gel that I found in the baking aisle of my grocery store.

When my husband got home yesterday we clinked eyeballs and devoured them. They kind of remind me of truffles, without the ganache. So technically they could not be truffles but still, the process was kind of similar. After we finished snacking I had some silly Halloween fun: I think he kind of looked better before he got his eyeballs back!

I did up half the batch of eyeballs and put them in the freezer for Halloween and the rest I am going to roll around in melted dark chocolate so they have the flavour of peanut butter cups. This recipe was not super difficult and the payoff really big, what an impact! I give it five out of five wooden spoons.