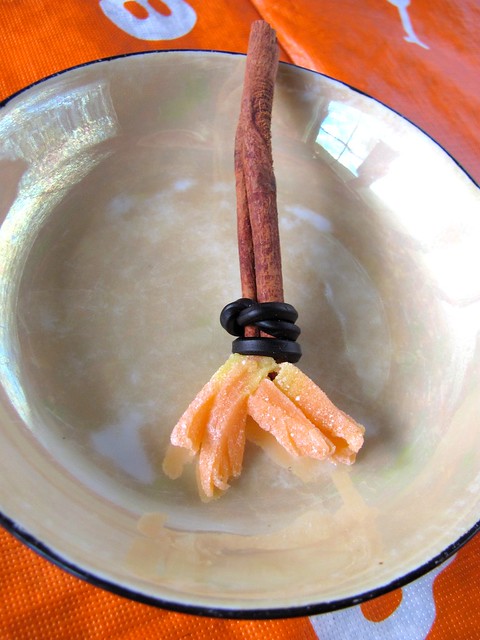 I am all about the witches so when I had the opportunity to make Taste of Home’s Witches’ Broomsticks I just had to try it. I had the perfect cinnamon stick and some black shoestring licorice I got at the Bulk Barn but picking up “orange candy slices” proved a little more challenging. I mean, what do they mean by that exactly? Did they look like orange slices or was I just supposed to pick up some generic orange candy?

What I ended up doing was buying orange and yellow sour gummy worms and cutting them into slices. Not easy! Using wet scissors, I was supposed to trim the edges to make them look like bristles. This stuff is so sticky! All cutting and slicing was almost impossible, talk about a pain in the butt and frustrating.

For the licorice you are supposed to coil some around the top of each orange slice “to secure to cinnamon stick…” What the? Just touching it to the orange slices were supposed to fasten it? Well, it didn’t! I made a knot at the back of the broom instead which was a big pain in the butt too! OK, it is cute and everything but it is also barely holding together. The only thing this broom is good for is looking pretty in pictures. I only made one and I will not make any others. What are you supposed to do with it anyway? You wouldn’t add all those flavours together in a stir stick, would you? I can wrap my head around the orange and cinnamon but black licorice too? Shudder…

This is more a food aesthetic than a treat and was not fun to make. The instructions were unclear, the treat is pretty much inedible and was a frustrating treat to make. I give this recipe two out of five wooden spoons.