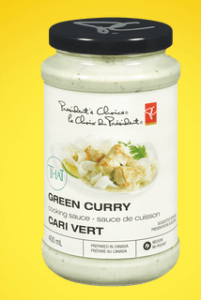 UPDATE: Had it tonight again with chicken and much spicier than I remembered it! So good though and fabulous with chicken.

I wanted to write about the stinker product of the year which was for us President’s Choice Black Bean Stir-fry Sauce but I can not seem to find it on their website anywhere so maybe they removed it. Which would be a good idea! So vinegary and terrible, blech!

So instead I am going to write about the happy foodie surprise of the year: PC Green Curry Cooking Sauce. My sister Shannon would write that she was using this sauce to cook dinner on a regular basis on Facebook. I had no experience with this kind of sauce so I decided to try it. 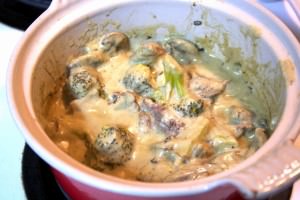 Shannon gave me some advice to help me through it. She recommended par-boiling the broccoli and not adding too many veggies and meat because the sauce only goes so far. Also, she knows how obsessed I am with sauces. Too little sauce and I am one unhappy foodie! 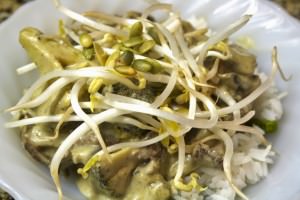 So I fried up a steak, cut it on the bias and added it to the sauce along with the broccoli and fried mushrooms. I scooped the dinner and poured it over Jasmine-scented rice and topped with bean sprouts and pumpkin seeds for some crunch. Gotta have crunch.

As Reg and I ate the meal, we were stunned. We had never had anything like it. We had nothing to compare it to. We liked it but it was so very unusual. And the lime. Oh the lime! The flavour of lime was so consistent and aromatic, I ended up loving it. I think Reg still isn’t sure if he likes it or not but he is going to be doing more taste-testing because I will be buying this regularly for an easy but delicious dinner.

Well done President’s Choice! You surprised and impressed me! For that you get five out of five wooden spoons but please, get rid of that black bean sauce OK? Thanks.

And thanks for the inspiration Shannon!!!