You are here: Home / Asian / Hot and Sour Soup 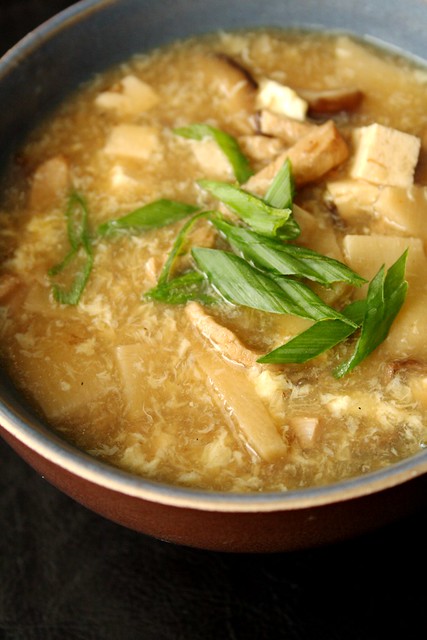 Recently people have been asking me how I can make so much food and I have answered, because I have to eat. I suppose most people do not make their own food but I do. I have been for years. I do take time off here and there but most of the time I make my own food and right now it is all Asian-inspired, all the time. So yesterday when we were hit by a giant snowstorm: I once again became a prisoner in my own home. How can I escape this horrid cold and snowy reality? By making hot and sour soup! Many times my family members would order this treat from Chinese restaurants and I could not. The soup was always too “hot” for me and would hurt. Oh the joy and liberation of making your own food, I can make it perfect for my sensitive palette. Not to mention get those internal fires burning to fight off winter’s cruelty. I was inspired by Tyler’s Ultimate Hot & Sour Soup recipe but went way, way off the map. I mean, where on earth am I going to find cloud ear mushrooms? So I picked up a mix of dried mushrooms and softened them in some boiling water and let them sit for around 20 minutes. I was shocked to find some shiitake mushrooms at my grocery store and knew they would be perfect to add to the soup as well! They are my favourite because they are a super food and help prevent cancer which is awesome. I removed the stems (which should have gone in the broth but I forgot!), cleaned the mushrooms, sliced them thinly and grated 1 tbsp of fresh ginger, slice up a can of bamboo shoots, cut up about a cup and a half of a cooked pork tenderloin into thin strips and got out my Sriracha hot sauce but you can use whatever hot sauce you like.
To a Dutch oven I heated up some oil and added the shiitake mushrooms. I cooked them until they got soft and glossy. Then I added the reconstituted dried mushrooms (saving the broth), ginger, 1/4 tsp of Sriracha hot sauce, bamboo shoots and pork. To make this vegetarian you can keep out the pork! Saute for a minute. In a separate bowl combine 1/4 cup of soy sauce, 1/4 cup of rice vinegar, some salt and pepper and a pinch of sugar. Add to the Dutch oven and stir. While I was chopping up the veggies and pork I heated up 4 cups of chicken broth and added some ginger coins, sliced green onions and smashed garlic in a separate sauce pan. After adding the dried mushrooms to the Dutch oven I added the leftover mushroom broth to the stock while the vegetables where cooking. Then I sieved the broth into the Dutch oven (if you think this is complicated, Tyler’s is even more complicated!). I brought the soup to a boil and then let it simmer for 7 minutes. Then I added half a brick of extra firm tofu cut into tiny cubes and cooked for a few minutes. I dissolved 3 tbsp of cornstarch in 1/4 cup of water and then added it to the simmering broth until it thickened. I stirred the soup as I added a lightly beaten egg to the hot broth to create those beautiful wisps in the thickened soup. When I tasted it at the end it needed more salt and a touch more hot sauce. Better for it to be more mild at the end than too hot!
This soup tasted very authentic to me. I had it for lunch and dinner last night with some leftover egg foo young. If this recipe is too challenging, I have another hot and sour soup recipe and tutorial here. I do not mind going the extra mile if the taste payoff is worth it and for this recipe, it is worth it.
This soup warmed me up inside and protected me a little from the encroaching and ever-present cold. Hot and sour soup, you are my hero.