You are here: Home / interview / Interview with Eat Street’s James Cunningham about Lay’s Do Us A Flavour Contest

Q: Last year’s campaign to get Canadians to come up with their own chip flavour ideas was huge. How is this year’s approach different?

The contest received incredible support from Canadians in 2013. This year’s contest offers Lay’s consumers even more opportunities to demonstrate their passion and creativity for potato chip flavours. In addition to submitting a flavour, this year Canadians will be able to choose from three potato chip styles for their flavour ideas: Lay’s Original, Lay’s Kettle Cooked and/or Lay’s Wavy.

Q: Can people enter more than once?

OF COURSE! The more the better! There is no limit.

Q: I noticed the Chinese food takeout theme in my media kit. Does this mean you are looking for Asian-inspired flavours in particular this year?

Canada is a land of food lovers and we’ve got an endless list of favourite foods, secret family recipes and standing take-out orders. Lay’s brand is inviting Canadians to use as their muse for creating the next great potato chip flavour idea.

We asked Canadians about their flavour inspiration and found out the following interesting flavour insights. These are the insights that helped the team strategically develop our Chinese food takeout themed media kits:

Of a list of favourite international dishes, respondents reported that Italian pizza (21 per cent), Chinese sweet and sour chicken (17 per cent), Mexican guacamole (15 per cent) and Indian chicken curry (11 per cent) were most likely to taste great as a potato chip.

Of the listed take-out foods from other countries, half (50 per cent) of all Canadians surveyed said they order Chinese food most often and one-quarter (26 per cent) say they most often order Italian.

Q: What advice can you give to people coming up with their flavours?

My advice is to think about the flavours that you REALLY love! We want to hear about the STORY behind your flavour – that is what is going to make it unique. And don’t EDIT your flavour – don’t think it is too weird or that other people won’t like it. Every flavour is like a finger print – be yourself.

Q: Is there anything the judges DO NOT want to see again?

Almost anything goes – but we ask that Canadians keep it family-friendly and without nuts and seeds.

Q: How did you end up with such an awesome food gig? I am envious!

You should be! It is probably the best gig on TV! I get to travel around and meet cool food truck owners and eat for FREE! I auditioned for another show entirely and the producers of Eat St saw the tape and thought I would be a good fit. I flew down to New York to meet the crew and the rest is history. We’re just putting the finishing touches on season 5 right now with 26 NEW episodes coming your way! 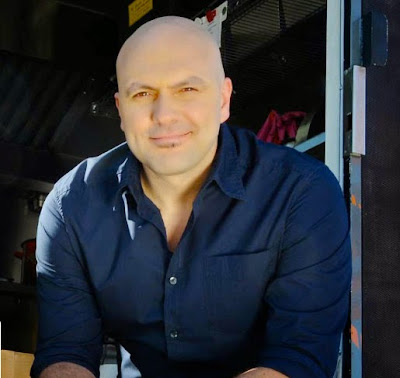 Q: What is the chip flavour of your foodie dreams?

Q: Blog reader Janet wants to know what the weirdest combo they ever had was? Like out of your foodie nightmares? (Canjun squirrel perhaps?)

Do Us a Flavour is a successful global contest that has been executed around the world. Worldwide, more than 12 million flavour submissions have been made to the contest. There are loads of unique and wacky winning flavours from around the world including:

Thank you James for the interview and I look forward to seeing what crazy but awesome foodie ideas Canadians come up with for Lays Do Us a Flavour Contest this year!