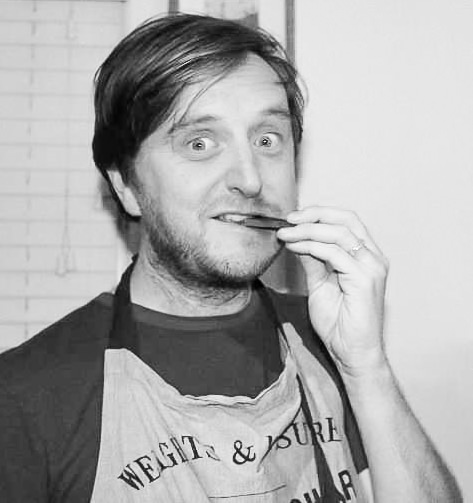 If you have been watching CBC‘s The Great Canadian Baking Show you will be familiar with contestant James Hoyland. For weeks I have been watching (and totally LOVING) the show and seeing him absolutely blossom as a baker. I watched him with my eyes wide with shock as he made cake batter directly in the actual cake pans with his hands. I also witnessed him struggle during High Tea week despite being British. Last week he got through week six holiday baking with his eco-friendly gingerbread house that was perhaps the most innovative gingerbread house I have ever seen. It was brilliant.

Last week I was so happy when he wrote to me and asked if I would like to collaborate! Being such a fan of both him AND the show it was thrilling to get to ask him about what it was like being on the show. Check out his very special bread recipe here! 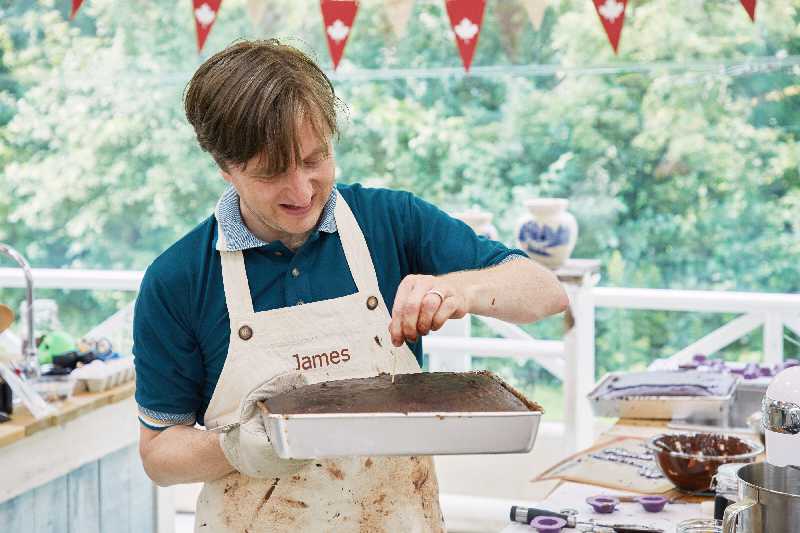 A: I had a fantasy at the back of my mind that if they ever made a Canadian version I’d apply for it but I didn’t really think I was ready when the casting call went out. For the audition we had to bring along something we made and we also did a “technical bake” while we were there. I made a ginger cake with a whiskey glaze for my audition piece. It was a rather plain looking bundt cake next to some of the spectacular looking cakes on the table so I thought, “Well this was a fun experience but I’m not getting any further”! But I guess it tasted good! I was asked to do an on-camera interview along with a couple of other people and then was sent on home. One of those other people was actually Jude who also made it through to the show.

Q: Were you surprised you were chosen? Did it turn your life upside down?

A: I thought I’d done OK but I didn’t expect to get through. I had in my mind this would be good experience and I’d practice and try again for season 2! So I was very surprised to be chosen. 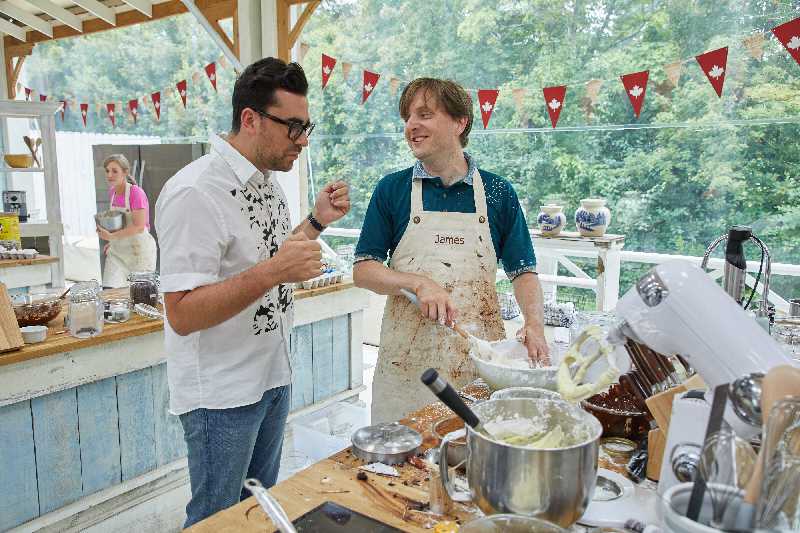 Q: Are you given any details of any of the upcoming bakes before you show up for the next episode so you can develop and practice ahead of time? Or do you have to do everything off the cuff? How long did filming take to do the entire show? Weeks? Months? Did you go home to BC in between takes or were you in Ontario the entire time?

A: In the British show they film at the weekends with the bakers going home between. The size of Canada makes that pretty much impossible so the whole thing was filmed over several weeks in Ontario and we stayed there during the filming. We had the briefs for the first few signatures and showstoppers ahead of time to allow us to develop our recipes. My kids definitely enjoyed the practice period! They got very used to coming down to cake for breakfast. For the later episodes we had a little time to practice between filming days. The technicals of course were totally unseen and the producers were very strict about that. We had no idea what we were baking until it was announced on camera.

Q: I noticed that when you made the chocolate bark for your Bûche de Noël/Yule log you piped melted chocolate into deep ice water — does this actually temper chocolate? We never got to hear your answer to that question on the show and it has been driving me crazy!

A: It’s not truly tempered when you do that because it cools too quickly to crystallize properly, but provided you start off and close to the optimal tempering temperature it’s still pretty good, with a nice snap and finish. It’s very fun and simple to do. You can make more complicated things than the twigs I made.

Q: Your eco gingerbread house was so modern and innovative in comparison to traditional gingerbread houses. What was the inspiration behind it and are you going to build that house one day?

A: I wanted to make something a bit different. My wife and I are both very into sustainability and have dreamed of building our own house for years so making a gingerbread eco-house seemed to be the perfect fit. I was very proud of that gingerbread house actually. I learned a lot of piping techniques to make grass, leaves and flowers as well as veggies in the vegetable garden and worms in the wormery. I generally hate doing piping so I really stretched myself with that and used no ready-made candies at all in it. I also learned how to do chocolate soil from YouTube the night before the filming! One day we might build it – though probably not in Vancouver unless we win the lottery! 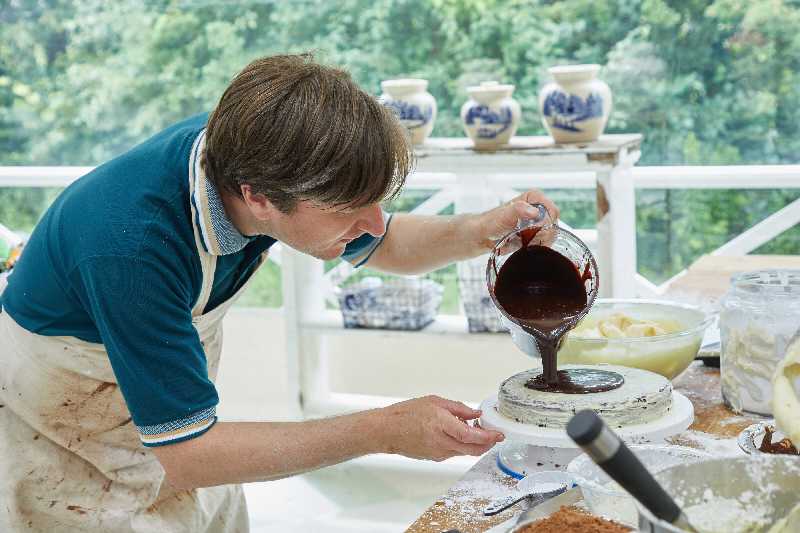 Q: Could you share a funny story about something that happened to you behind-the-scenes with us?

A: Can’t give too much away about that! One thing I do remember though was during the judging for the bread showstopper. Absolutely everyone’s breads were delicious and we kept running about nibbling each others bakes when we were supposed to be sitting still – particularly Cory’s Challah which was fantastic! We all got told off by the director because it messes with the continuity when bits of bread keep disappearing! Sorry not sorry!

Q: Did it ever rain? Because it never looked like there was a rainy day, LOL.

A: It only really rained once. During the tourtiere challenge there was a huge thunderstorm that had us all worrying. That’s when I started goofing around with my swim goggles. Other than that I think it was just hot and humid most of the time – not ideal chocolate tempering weather I can tell you! 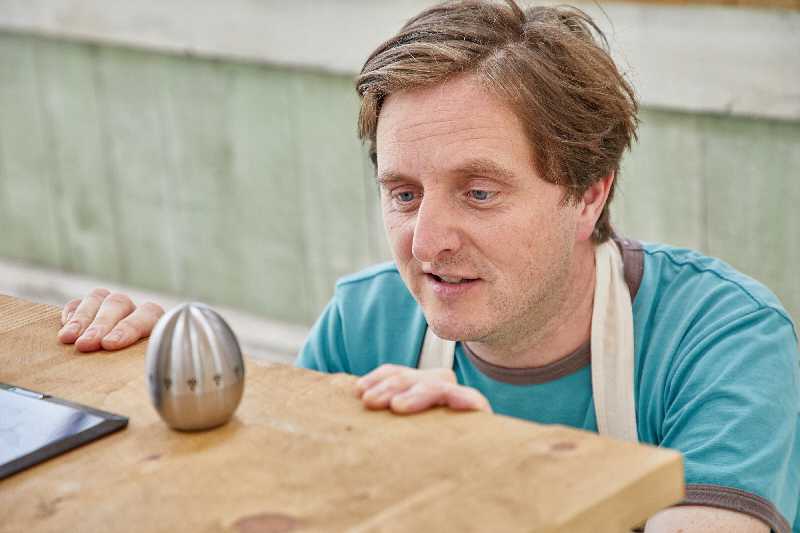 Q: Were the days gruelling or did you manage to have fun too?

A: Days were certainly long, exhausting and a bit of an emotional roller coaster but every minute was fun! The whole crew, the other bakers, the hosts and judges were all absolutely lovely to work with. The atmosphere on set was excellent. All the bakers are still great friends and we all talk every day.

Q: Is Dan Levy as hysterical and awesome a guy as he is on the show?

A: Dan is a total gent and very funny. Julia is also such a friendly and funny person. One of the things that really struck me was how genuinely hard both of them found it to announce who was going home. They got quite choked up about it.

Thank you so much James for answering my questions! It absolutely makes sense that you had to stay there the entire time considering how large a country we have here. Your lucky kids getting to be breakfast dessert taste testers! I was thrilled to see you do actual piping and fascinating decorating techniques for that gingerbread house. Oh the magic of YouTube! I myself am not the best with the piping bag but you give me hope and bring me inspiration. How wonderful that you developed friendships with the other bakers, that warms my heart. It is one of the reasons I truly believe in this show. It is so positive, creative and beautiful.

Good luck with the next round of baking challenges James! You can watch The Great Canadian Baking Show on CBC Wednesdays at 8 pm (8:30 NT). All the bakers are wonderful and it is so entertaining and moving to watch these foodies do what they do best… BAKE!