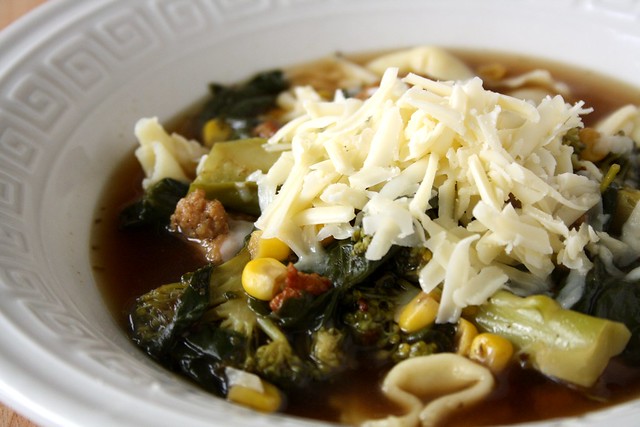 After the horrific soup I made the other day, I decided to go back to a classic soup recipe that I have been making forever. I fell in love with it when my sister Jamie made it for dinner one night for our family. I was going to university and having a spiritual awakening to food thanks to The Mists of Avalon. There was something about this soup that made me feel like I had been transported to another world, one of feasting and magic. It was the first time I realized there was more than just nutritional value in food. I still have the original dot matrix print out that Jamie made for me because she knew I loved it so much. According to the printout, this recipe for Tortellini Sausage Soup comes from International Produce Cookbook and Guide via Compu-Chef. Neither of which seem to exist any longer. I have changed the recipe here and there too but there are some things that can not be changed if you want to taste the magic. As you all probably know, I rarely eat pork. My husband NEVER eats it so I had to only make half the recipe since I would be eating it alone. I got three links of mild Italian sausage, cut them out of their casings and sliced into bite-sized pieces. I sauteed them in a large Dutch oven in some olive oil over medium high heat for five minutes on each side, making sure they browned nicely. Then I let them drain on some paper towel. While the sausage was cooking I prepared all the vegetables. I had bought this beautiful bunch of fresh spinach from a market and wanted to use it instead of frozen spinach, which is fine to use. I cut up the spinach, filled a very large bowl with water, added some vinegar and salt and then added the spinach. I moved it around, swishing it to help all the dirt fall to the bottom. I strained, rinsed and soaked in more water until I knew it was very clean. I also submerge half a cup of broccoli florets in salted water to get them very clean. I got out 1/2 cup of frozen corn and sliced half a zucchini to finish off the veggies. And then? I dumped everything back into the Dutch oven and added 2 cups of water, 2 cups of beef broth, 1/2 tsp of dried basil and 1/2 tsp of dried oregano. I stirred it altogether, brought to a boil, reduced heat and let it simmer for 15-20 minutes. The original recipe calls for cooking the cheese tortellini in the soup but the cooking time is all wrong and if you do not eat the whole batch the pasta will continue to soak up the broth and swell so I made it on the side. Add tortellini to your bowl and top with soup: 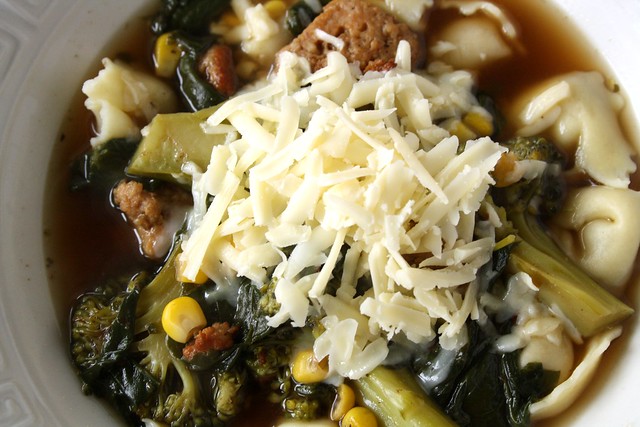 Season with salt and pepper and top with some grated cheese, I use old cheddar. Oh how it melts perfectly into the soup, adding a nice creamy bite to every spoonful. You absolutely must use the sausage and beef broth in this recipe for the proper foodie effect. I have tried changing those elements and it alters the soup too much from its magical goodness.
Such an odd soup. No onions, no garlic, no sauteing… Yet, it is perfect. It defies cooking logic and yet it works. The dried herbs are so lovely in this dish, perhaps that is the Medieval element that I love so much. Fresh herbs are beautiful, I use them all the time, but there is something so special and timeless about dried herbs with a dark broth filled with vegetables and meat. The tortellini? Not so Medieval.
Still, this is truly spiritual food for me.