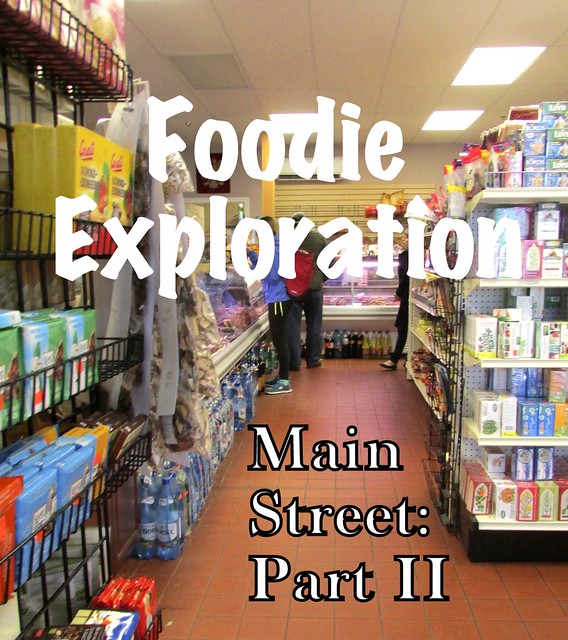 After Stephanie and I geared up on food at Caffè Artigiano on Main Street, we set out to explore the east side of Main Street and check out the houses and neighbourhood that used to be a marsh. Stephanie had heard of a café being in the middle of the burb and wondered if it was still around. 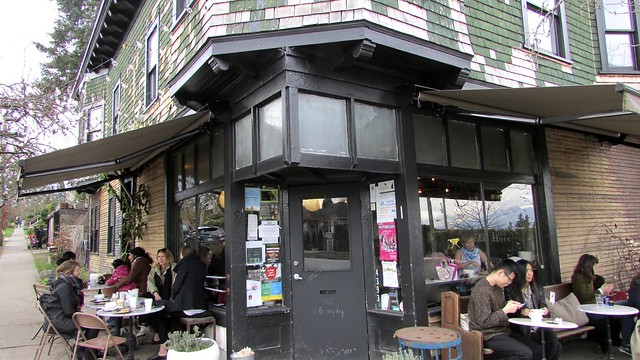 Le Marché St. George was definitely still around! And in the middle of a residential area. How odd! Practically every seat inside and outside was taken. Clearly, this was the place to be. 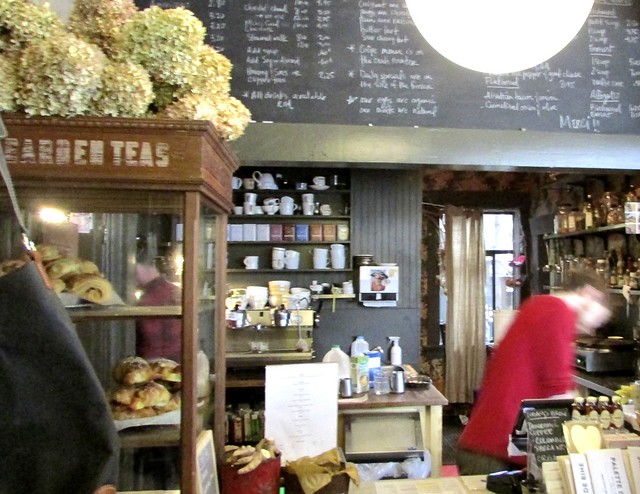 The place obviously was a hit in the area and the rustic charm warmed my heart immediately. 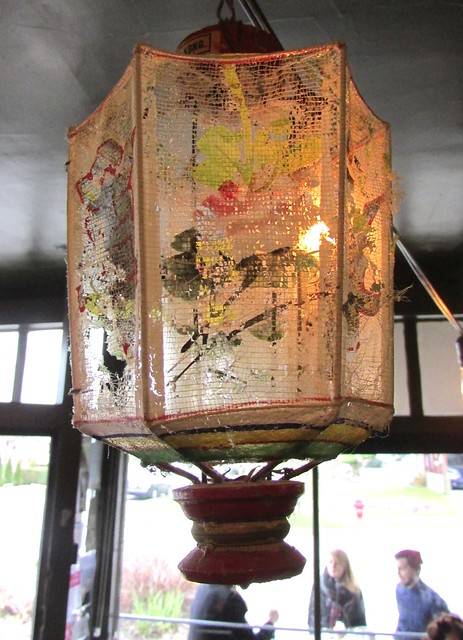 It was right around Chinese New Year and these weather-worn lanterns hung suspended across the ceiling. 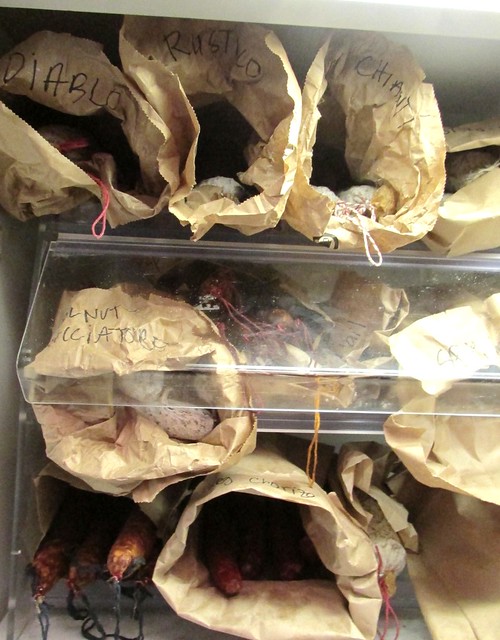 If I had not be on a long walk, I would absolutely have bought some Diablo sausage that apparently is made by a fifth generation sausage-maker! 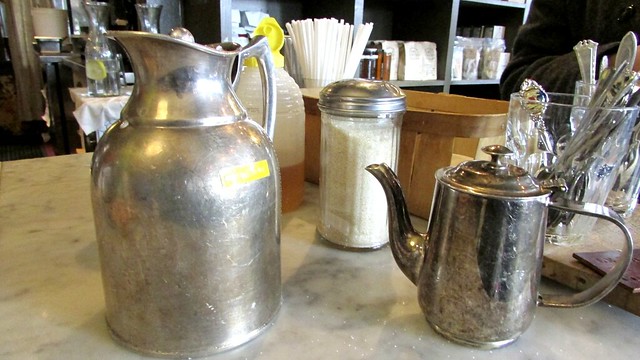 All the details at Le Marché St. George were charming. Too bad we had already filled up on coffee and food! 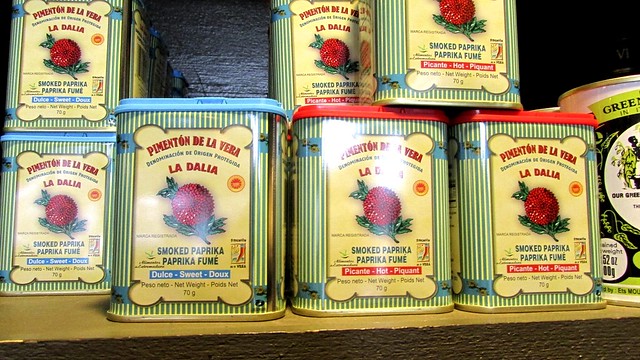 The quality of the ingredients appeared excellent but affordably priced. These imports of different kinds of paprikas came all the way from Toronto. Awesome. 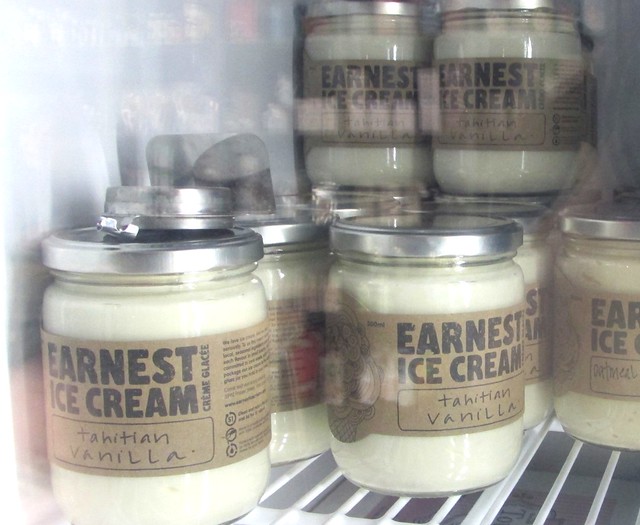 I love discovering new local brands like Earnest Ice Cream: “...our flavours highlight the best from BC farms.” Again, not something I could carry around with but if I lived in the area? You bet! 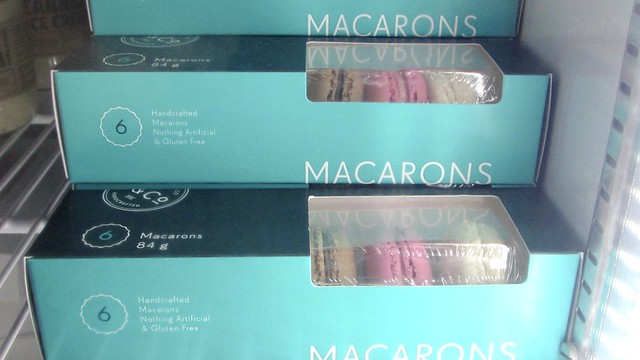 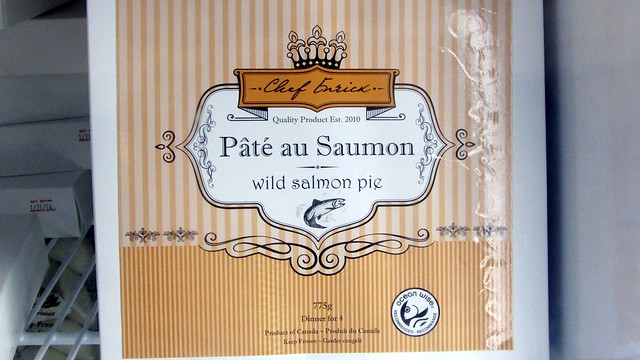 … Or pick up a wild salmon pie for dinner. I was absolutely amazed at how much Le Marché St. George had to offer their patrons. I wish I could have bought something but we still had a walking tour to do. 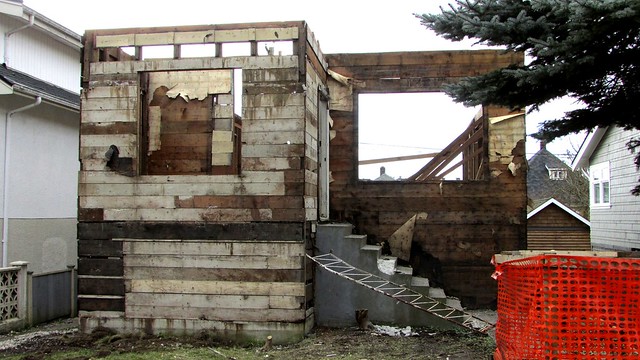 What is considered an older home in Vancouver is probably comical to those from much older cities and districts. Although burned out homes are unfortunately, pretty common. 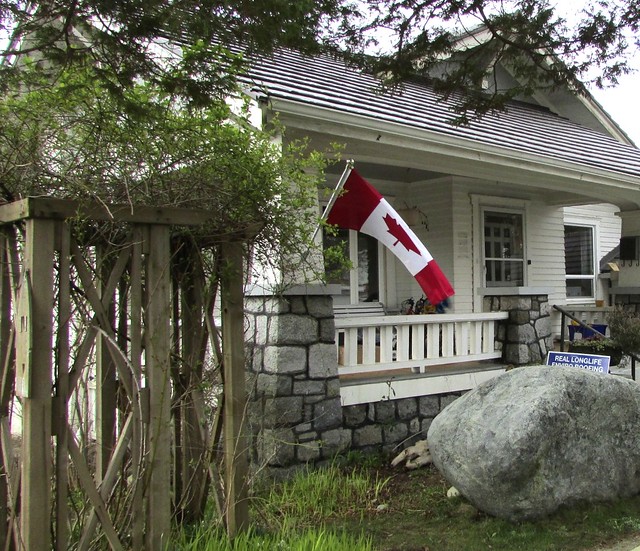 But then you come across an historic property like this one with a GIANT rock in the front yard. 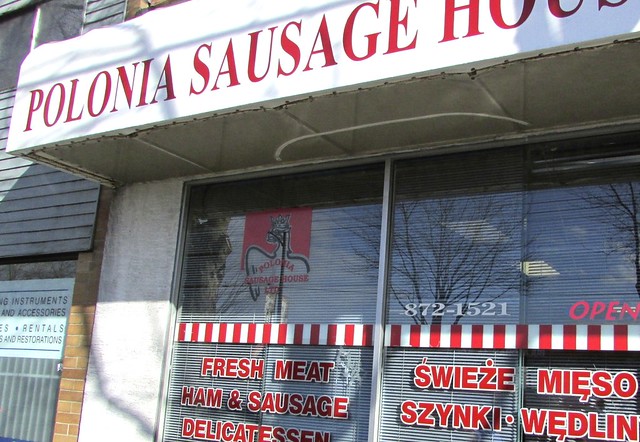 We stopped by Polonia Sausage House Ltd at 4286 Fraser Street to check it out. Stephanie and I both agreed that it was good to have company to go into little shops like this one. For some reason, it can be intimidating. 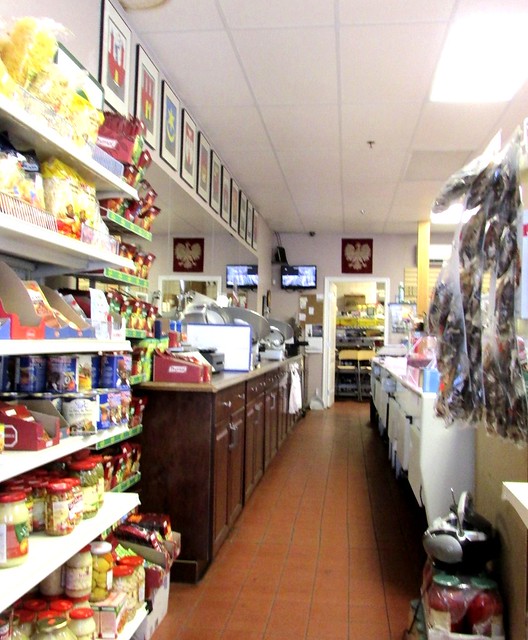 The second I was in there though, it took me back to my childhood. My mom used to go to shops like this all the time and the smell of the deli and the spices combined… Absolutely made me feel like a kid again. 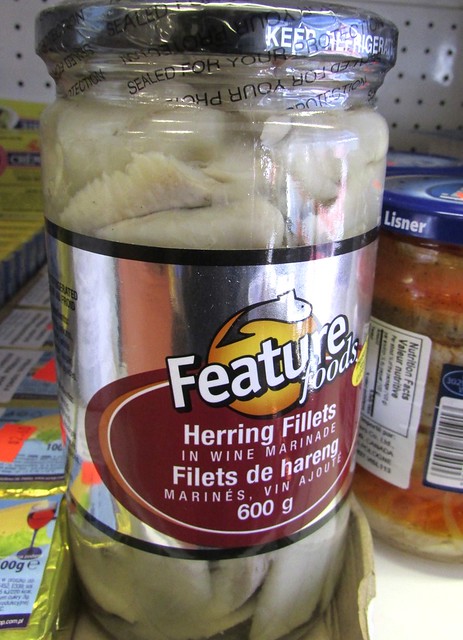 That and seeing pickled herring in wine, one of my mom’s favourites. And mine too! We used to snack on it when I was five. Yes, I was a weird foodie kid back then. Anything with a strong flavour and I loved it. 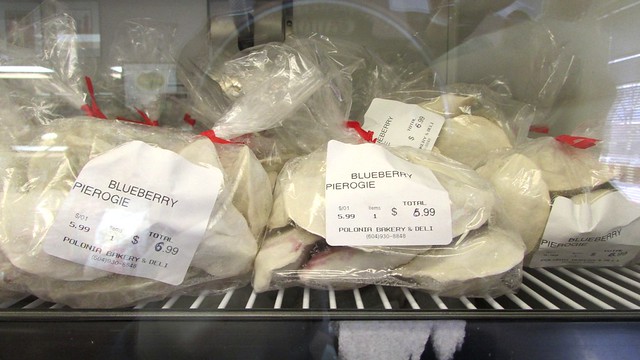 But this was new to me! Blueberry pierogies???!!! I had never had a dessert pierogie before but now I want to make some. 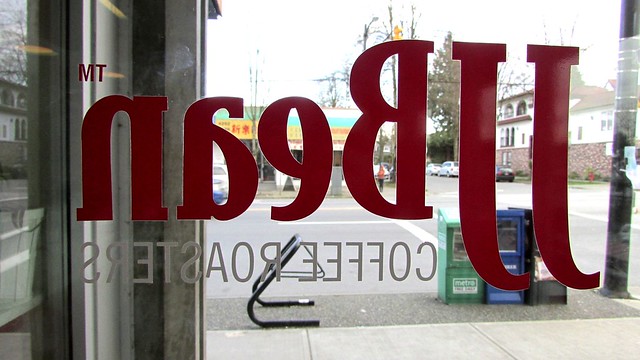 The foodie part of the day ended at JJ Bean at 4287 Fraser Street. Another coffee chain I had never been to! Vancouverites love their coffee. 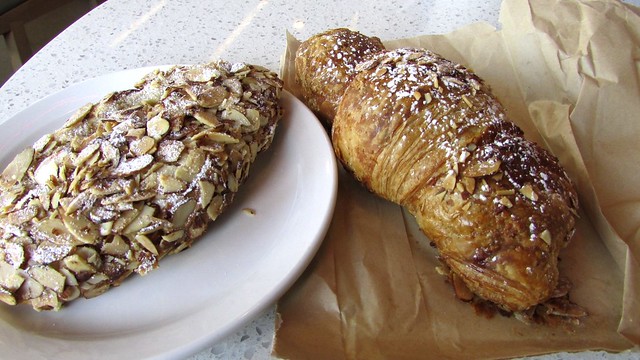 Stephanie had picked up a pastry from, oh my goodness, was it a Lebanese bakery? She brought it out, along with her croissant and a DOUBLE-baked almond croissant from JJ Bean. At this point, I needed more hydration than anything so I ordered a Mandarin San Pallegrino and we got to taste testing. 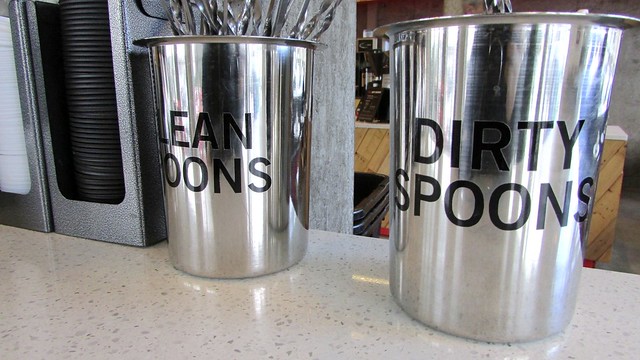 I was still pretty full from lunch but how could I say no to pastries? 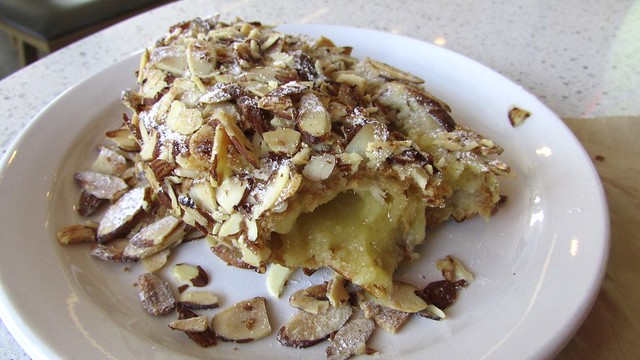 The double-baked almond croissant was by far the winner. It had all this delicious almond gooey goodness in the middle and was crusted everywhere with roasted almond slices. Never in my life had I ever had to leave a pastry behind but that was it. I could not eat anymore but I have dreamed about this croissant ever since.

The hardest part about the day was our walk back to Stephanie’s bicycle and my bus stop. We climbed a fairly steep hill off the beaten path and I had to hold my stomach. I told her I had never hiked with a pound of butter in my stomach before! Oi!!!

But it was worth it. So very worth it. Next time I might ask Reg to come and pick me up in a wheel barrel and push me home though. That night? A big salad for dinner and an early night to bed.