You are here: Home / personal update / Moving Back To Toronto, My Least Foodie Post Ever

And One Of My Most Personal… 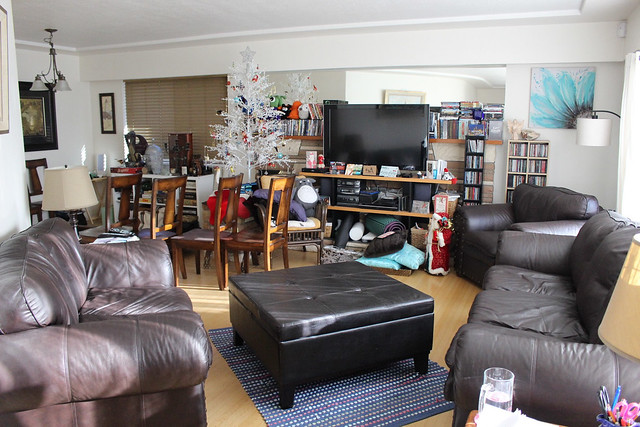 Normally I would never write anything so personal here on my foodie blog. I like to keep the deeply personal separate because food is my haven. My escape from my woes. So many of you helped save me and get me back home that I though I would share a little bit of the story.

Over the last year my life really started to fall apart. The harder I tried to keep it together, the more my marriage slipped through my fingers. When we found out we had to move, I tried to find us a place that we could be happy but as the time began to run out it became clear that the problem was not with the places were were looking at, it was with us. 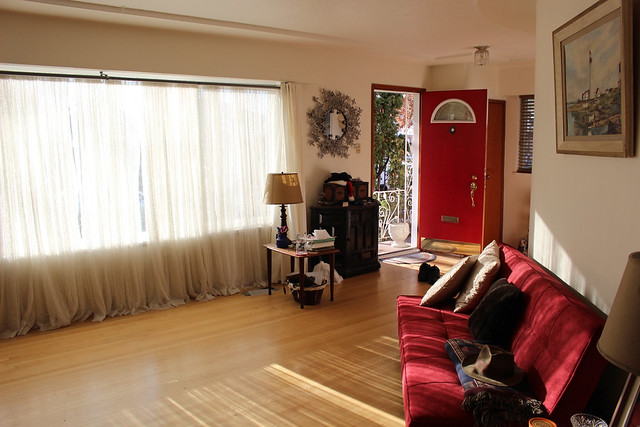 Then, my life began to disappear. Furniture was sold, donated and every piece of our life examined. Over the last year I had used up every fibre of my being to make things work that I was on the verge of physical exhaustion. Mental and emotional collapse were also around the corner. I realized that if things were not going to work out in my marriage then I had to leave before I lost the power to do so. 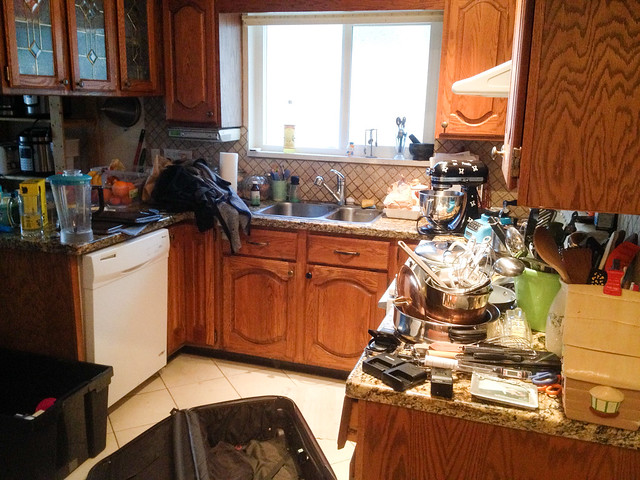 I moved two days after our marriage was officially over. I had to pack in two days. Now I had been downsizing for a long time but realizing you had two days t put only your greatest treasures in eight totes was ridiculous, I know. But I just knew I had to be home for my birthday. There was no way I was going to spend another birthday feeling so very sad and alone.

Two things that were coming with me in my luggage were my KitchenAid mixer Rebel and my blue Diamond blender. It took up the whole piece of luggage and was unbelievably heavy. I did not care. I could not live without them and did not want to risk them getting damaged in the move. I wrapped everything with my sweaters and then packed a huge duffel bag with all the clothes I could fit into it. 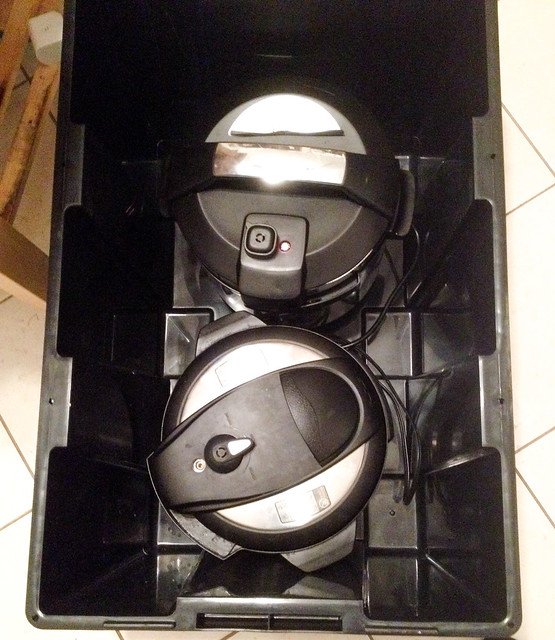 Packing kitchen appliances is not easy because some of them are huge! My pressure cookers made it and I put a ton of personal treasures and kitchen tools around them. I did not take many dishes or mugs. Not even one wooden spoon. If it would cost more to move than to re-buy, I left it behind. 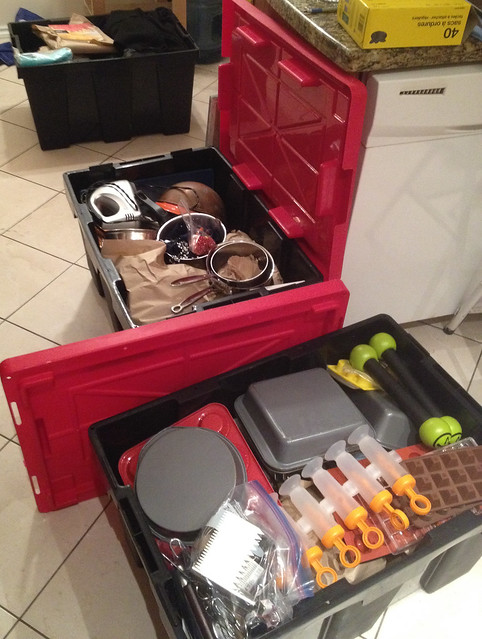 Most of my bakeware ended up being left behind too. I had to take out all my cake pans to make room for my dehydrator which is huge but was a gift from my Dad and his wife. I could buy more cake pans in Toronto. Investing in another dehydrator is a whole other story.

Everything I packed was heavy. I only got to take maybe 10% of my cookbooks (heavy), my photographs (heavy) and my journals (I have been journalling since I was 6… super heavy). 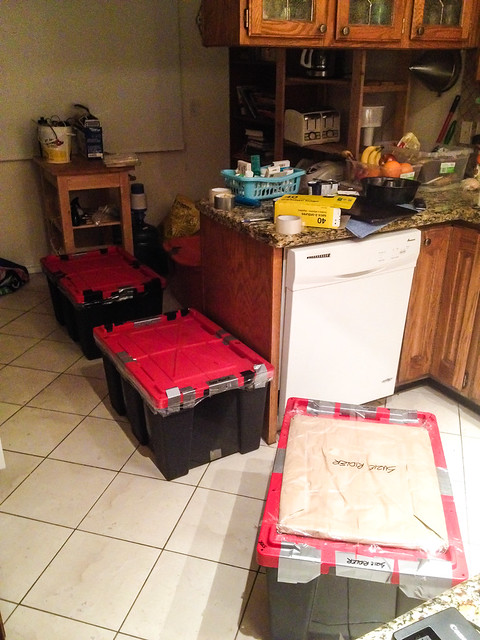 Reg was super supportive and got out more totes for me if he saw me hesitating on leaving something behind. He helped wrap everything together and even figured out a way to get that painting I did from Paint Night so I could take it with me. 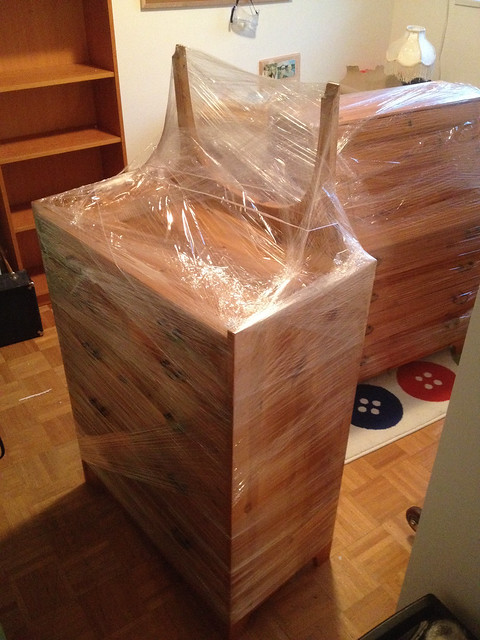 I only took two pieces of furniture with me and my filing cabinet. Turns out you should not shrink wrap a mirror bracket on a dresser. It broke by the time it got to Toronto! 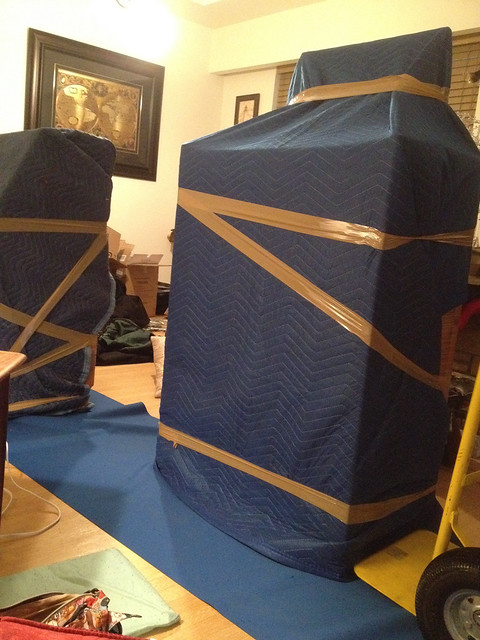 I was alone the day the movers came. I kept it together as long as I could but as soon as they were out of the door I collapsed on the floor. The totes were so heavy that I knew my bill for the move was going to be way higher than the estimate and I did not know how I was going to be able to pay for any of this. My heart was broken and I was beyond terrified. 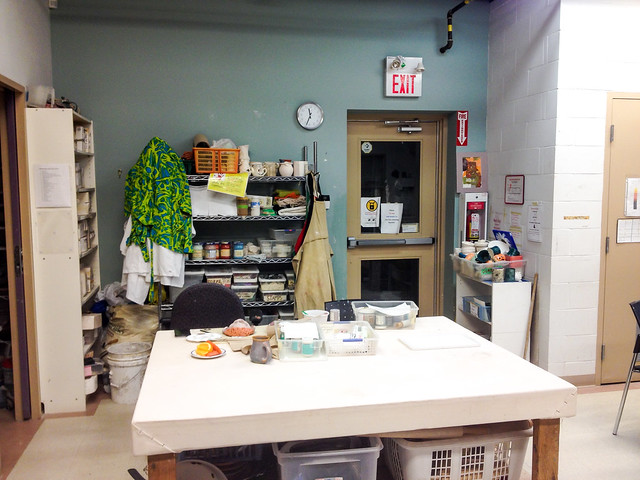 The next day I was on my own and alone so I stopped by The Art Studio one last time. It was a quiet day so I just took my time to say good-bye to the space 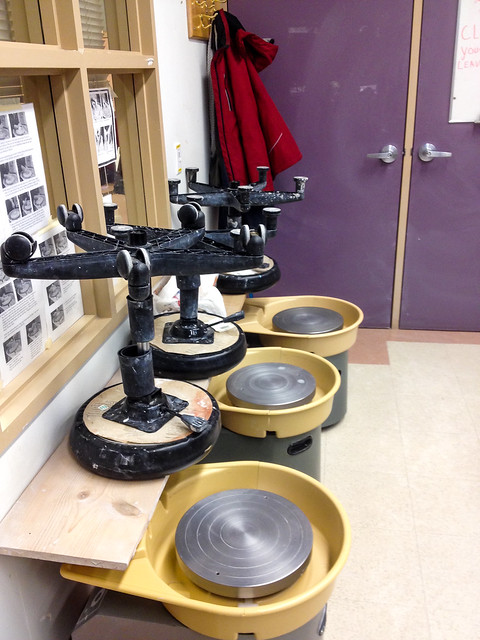 This was my sanctuary during my time in Vancouver. When I felt the most alone and broken I could come here and be supported by beautiful people and I even learned how to use the wheel, a life long dream of mine. 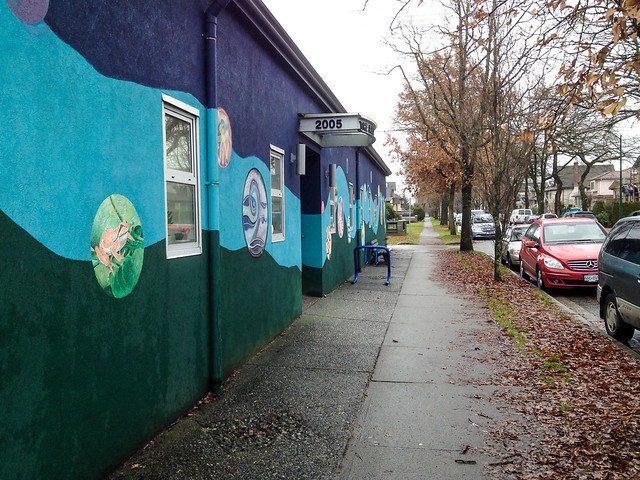 The day I left I saw the tulips starting to break through the earth and thought how cruel it was, considering what waited for me on the other side of that long flight. I was going back to the extreme cold of Ontario that I escaped when I met Reg 23 years ago.

The physical toll was too much on my body and I was on the verge of breaking down completely so I asked a dear friend to drive me to the airport. If I took a cab I knew he would want to drop me off at a psyche ward and if Reg took me I would never get on the plane. My friend was a rock star and helped me keep it together and not completely fall apart which, considering the circumstances, was almost a miracle.

My sisters suggested I request a wheelchair for when I got to the airport and I am so relieved I did. I could barely function after saying good-bye to my husband for the last time. I could not stop crying and was barely coherent. Everyone at Westjet was kind and sympathetic and helped get me through security. 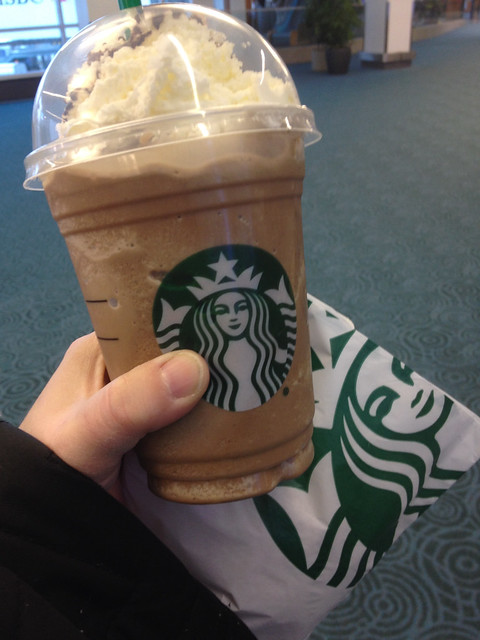 They just wanted to take me to my gate though but I had not been able to eat anything that morning so I walked to Starbucks like something out of The Walking Dead for food. I stumbled slowly and in shock like a zombie. My face was probably all puffy and red. I was worried they would not let this walking mess onto the plane. But I did it. I got my frappé and remember being mad that if this had actually been my birthday (in 24 hours) that mocha frappuccino would have been free.

As I waited for my flight I wrote and scheduled my birthday post, hoping that some of you would be able to help with the huge cost of getting me home. I had no idea that so many of you would do so much to save me. Not just in birthday gift money but your kind and thoughtful words that helped heal me and renew my faith in humanity. 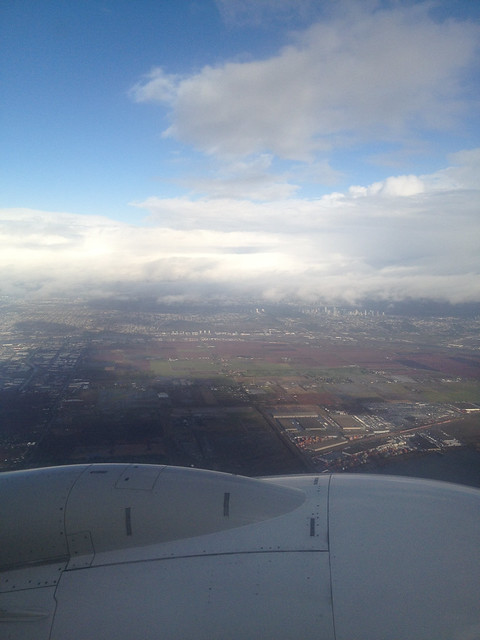 I choose a window seat where I could watch the mountains as I flew away but the clouds kept them hidden. How extraordinarily symbolic. I tried so hard to connect to Vancouver and live the BC dream life that I thought of every day I lived in Nova Scotia to keep me sane. Here I was leaving it for an even harsher climate. The climate that started me down my path with fibromyalgia in the first place.

I curled up into a ball and cried most of the way across the country instead of getting to see the mountains. I took way too much medication to help me through the process and was completely spent by the time I got to Toronto. 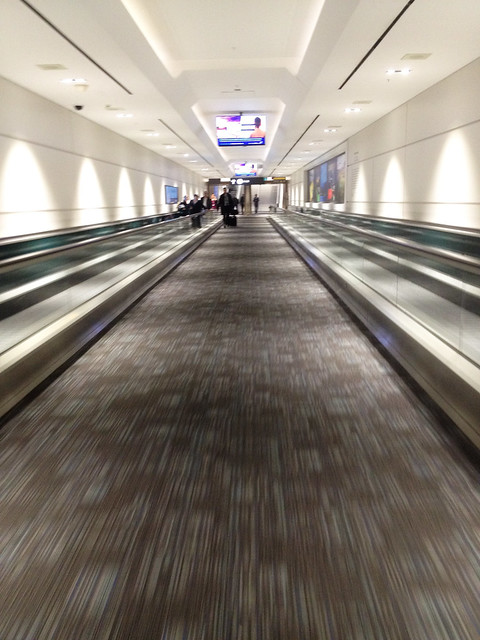 I am so glad I got wheelchair service because man, Westjet’s terminal is so far from baggage claim. I had to take two wheelchairs, two elevators and a golf cart just to get there. I love this shot, it reminds me being on the Millennium Falcon at warp speed and did it ever feel like we were going that fast. I used the last of my strength to hold on. 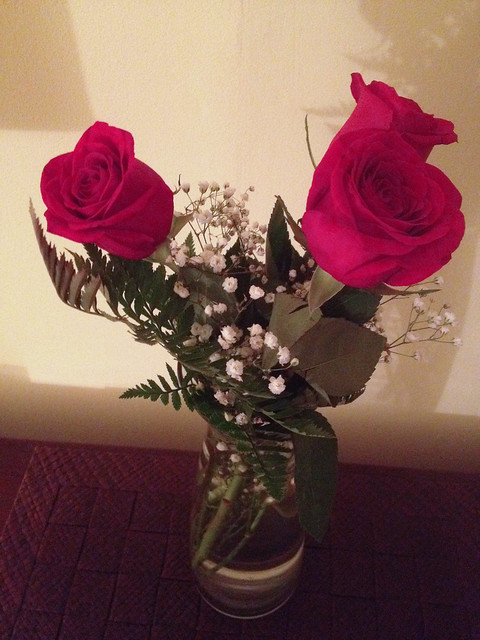 My aunt and uncle were waiting for me at the airport with roses and big beautiful smiles. I was rolled up to them with my comically large and heavy luggage and then collapsed in their arms. They took my to my sister’s home which is now my home too. Thank god for family. I then collapsed in my sisters’ arms too and cried and cried. I made it. I made it. 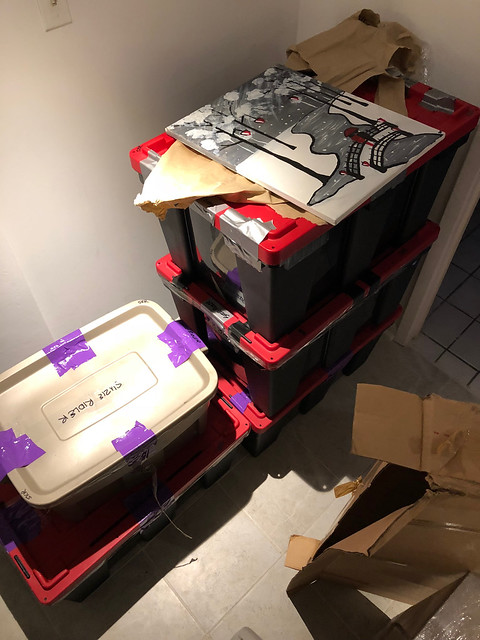 Since then I have mostly been in recovery mode, getting out here and there, but mostly resting and waiting for my stuff to arrive. It finally came and the painting got a little damaged but for the most part, survived. Like me.

I have not planned any farther ahead than this moment. I just knew I had to get here and grieve the loss of my marriage. Stay in bed for days if I have to. Move only when necessary. Did not help that I did actually catch a cold during this entire process but hey, for once, it did not turn into pneumonia. I call that progress.

When you have to leave behind 85% of your life you see where your priorities are. The first thing I unpacked and put away were my cookbooks. In fact I had a panic attack when I found one was missing but later discovered it under my jewelry-making supplies. 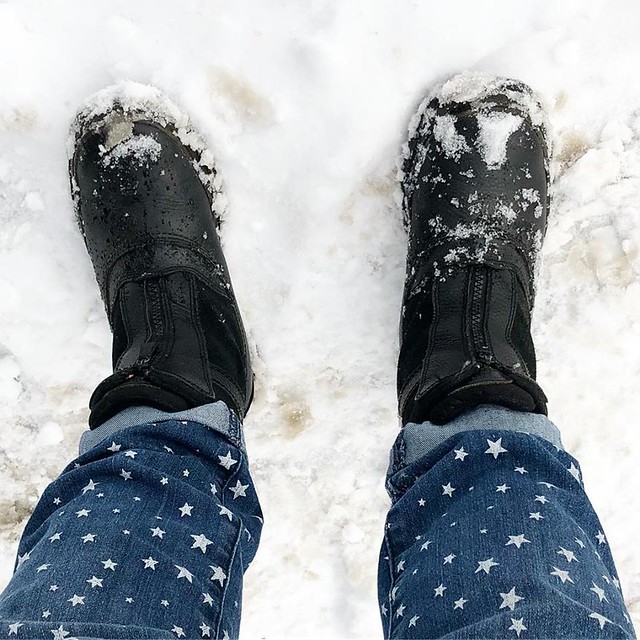 It is not easy navigating through snow and ice again. In fact I was going to go to Winterlicious but events were cancelled due to a snowstorm. 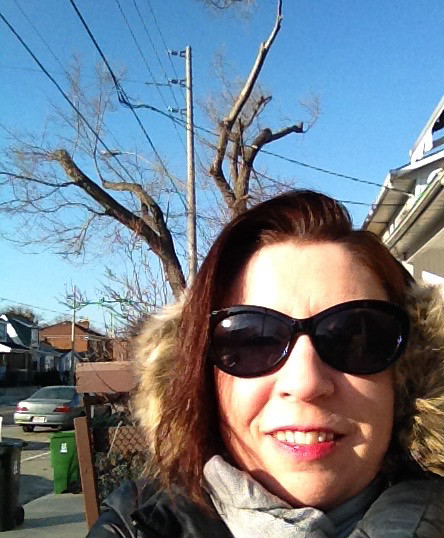 As awful, and I mean AWFUL, life has been for so very long and how hard it was to get back and now have to start my life over yet again… I choose to believe everything will turn out OK. I will survive. I will recover. I will get back out there and find foodie stories to write about. I will teach myself French cooking in Jamie and Shannon‘s kitchens. I will take classes at Madame Gateau and so much more.

Not being with my best friend and soul mate for the last 23 years… Well, that is never going to be easy and I doubt I will ever get over it. I do know that with all my heart I want us both to be happy. Sometimes loving someone means saying good-bye. I hate it. I fought it. I denied it. Now I am making peace with it but am in mourning and will be for a very long time. If there had been any other way, I would have done it. At least I know I tried with all my heart to make it work. Sometimes things just come to an end, whether we want them to or not.

Thank you again for helping me get through this. And I will. Somehow, I will get through this and find a second life in Toronto. A very unexpected second phase of being a Torontonian once again.