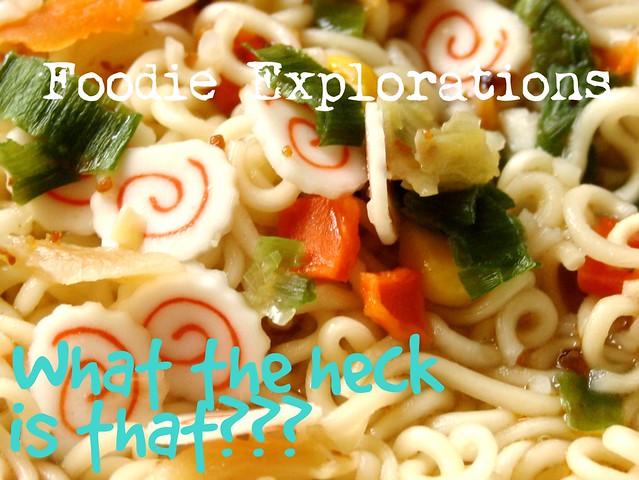 I did something a little crazy! I was out at Chong Lee Market picking up fresh produce when I decided to buy a big bowl of ramen noodles. But these are not your average crappy ramen. Well, not entirely. 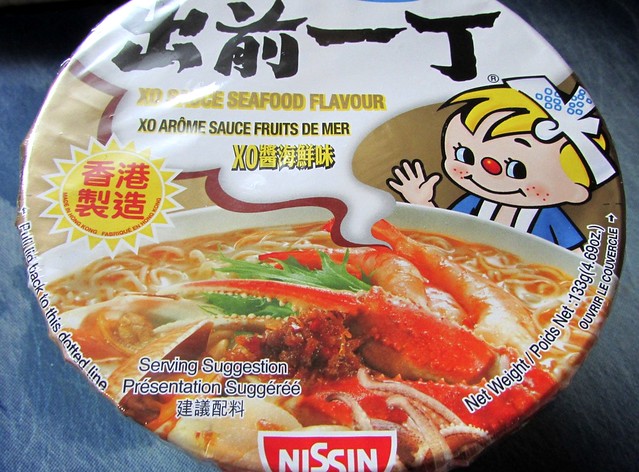 Not something I would normally do but I watched a special on “real” ramen and had been craving the noodles ever since. I got a seafood flavoured bowl by Nissin because of the cute kid on the cover and the fact that it uses XO Sauce, a spicy seafood sauce. I like to have soup at lunch and this cost me a whopping $1.29. 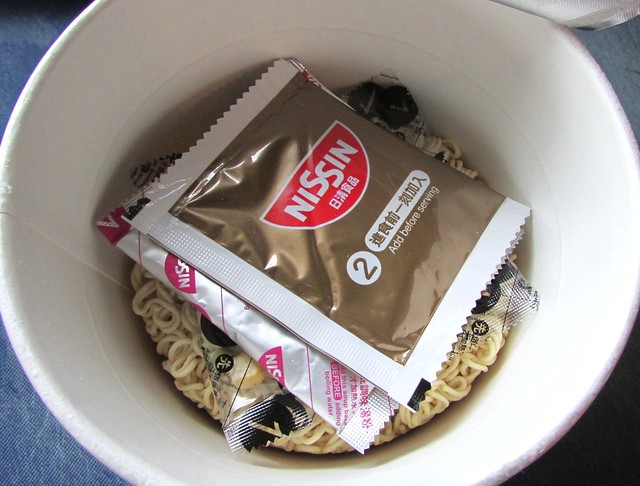 This is what the bowl looks like inside when you open it up. 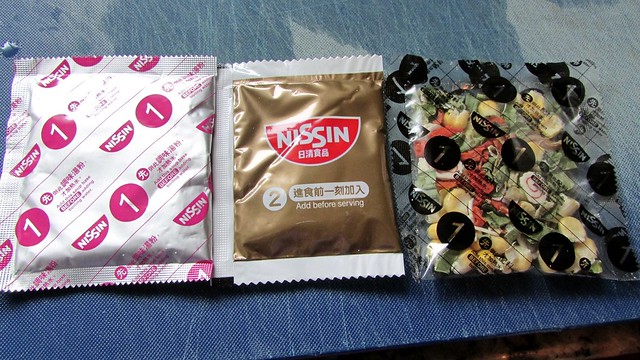 On the bottom there are ramen noodles and three packages. 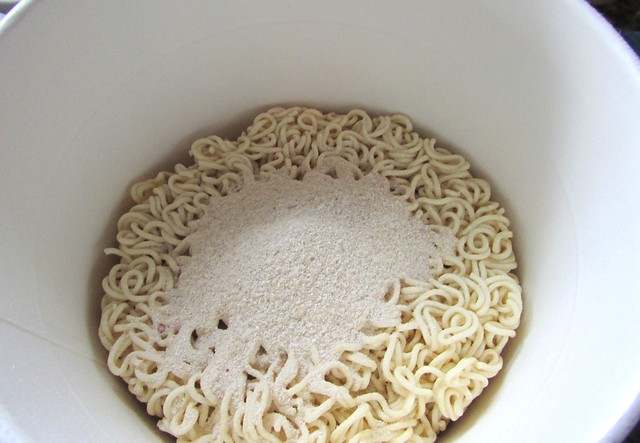 One is for the “broth” which I am sure is filled with MSG which I think the ingredients refer to as “flavour enhancers” but I could be wrong. Luckily for me, I am MSG tolerant but if you are not, I would recommend backing away… 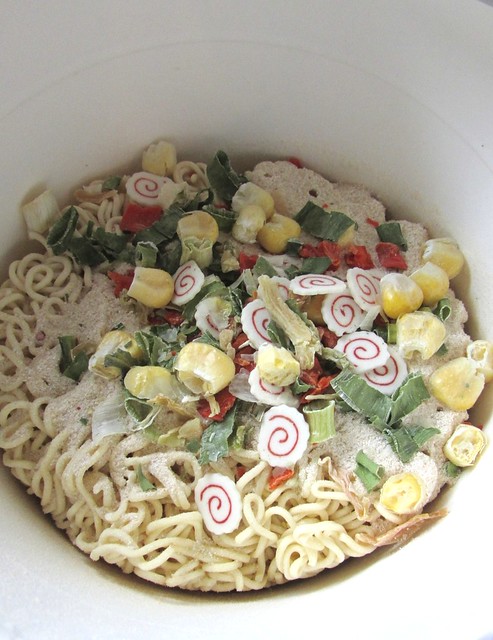 Then there are the dehydrated vegetables and what the heck is that spiral thingy? I actually have no idea. There is also dehydrated pollock in there but I don’t think those mini cinnamon bun-looking things are fish. Fascinating!

The XO sauce goes in at the end… 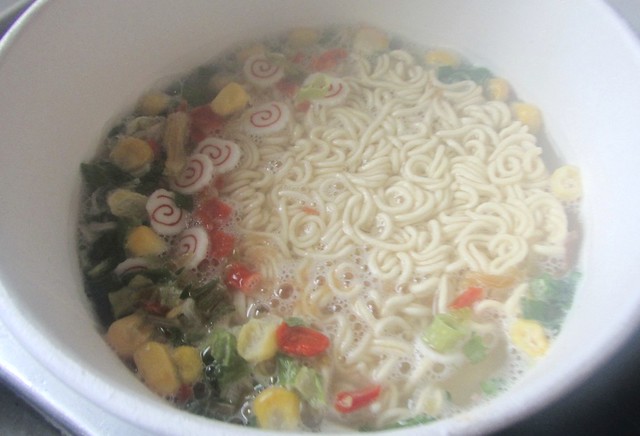 You add the boiling water and close the top for three minutes. 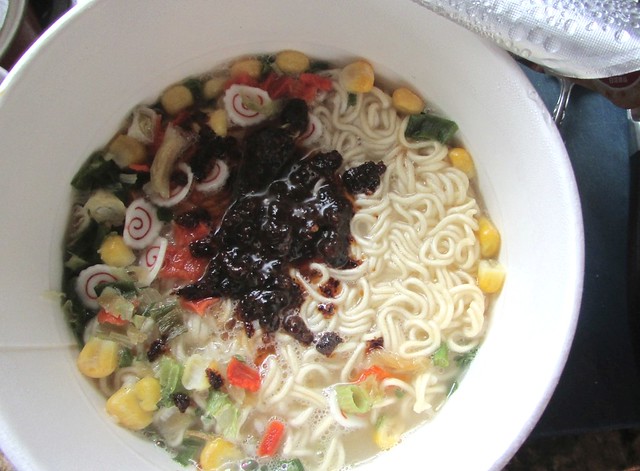 Now you add the XO sauce. 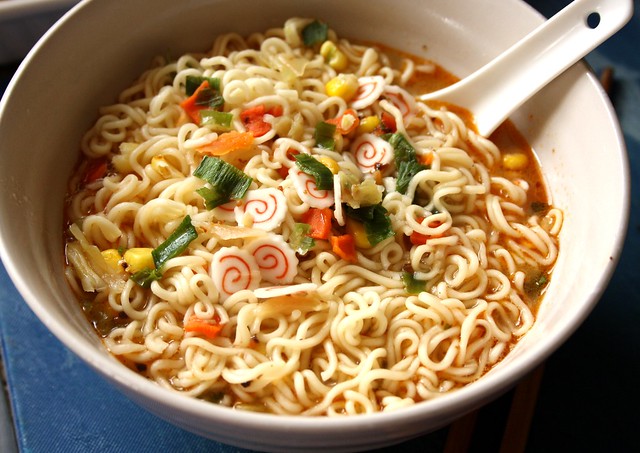 I mixed everything together and put it in a pretty bowl. I ate the noodles with a combination of chopsticks and soup spoon and I have to admit, I loved it! I am almost embarrassed to write that down. One of my favourite things in the world is noodles so a big box of salty carbs made this foodie very happy.

This year is all about not being afraid and trying things I normally would never consider. I can not believe the joy I had eating these noodles. Ramen was one of the first dishes I learned how to make when I was at home. I know, it isn’t “really” cooking but to someone who did not know how to boil an egg, it was a miracle.

These noodles took me back to one of my first experiences of loving making my own food. Yes, it is filled with chemicals and should only be enjoyed on days when your blood pressure is low and you need a salty boost. But it was fun!!! It made me laugh and smile and took me back to the beginning of my foodie journey when putting sesame oil on ramen was chi-chi cooking to me.

Never forget how much fun you can have at a market for under $2 when you keep an open mind.