I was invited to participate in the PEI Recipe Challenge and asked to come up with a Prince Edward Island-inspired recipe. What an honour! I was just in PEI last month. You can read all about my food experiences here and about my travels here.

Where on earth to start?! I was up nights thinking about what I wanted to make, how I would go about making it and then I came up with my idea… seafood potato skins! Not just a potato skin with seafood but with a seafood sauce. The best part of this recipe? The sauce is so good I even used it on pasta, what a foodie dream!

What could be more PEI than potatoes AND seafood?!!! This recipe begins with the mighty potato, the jewel of PEI. Prick the potato with a fork all over. With a paper towel, apply some canola oil on the skin of the potato and then sprinkle with salt. Bake in a 500F oven directly on the rack. This potato was done in 40 minutes but most large potatoes can take up to 60 minutes to cook. Feel free to use a huge potato, they shrink and you want a big boat for all that seafood. Remove 75% of the potato filling, make sure to leave at least a 1/4″ of flesh along the sides. Brush the potato with some olive oil and sprinkle with salt and pepper. Bake in a 350F oven for 10 minutes. Most potato skin recipes call for deep frying. By cooking the potato twice you get a nice and crispy potato that can handle the filling without using all that fat. Saute two cups of your favourite seafood. I used frozen seafood because I wanted to make a recipe that was accessible to everyone. I thawed the seafood overnight in the fridge and then dried with a paper towel. I sliced the scallops so they would easily fit into the potato skins, as well as cook in the same amount of time as the shrimp. I added 1/2 a finely minced shallot and 1 finely minced clove of garlic. I seasoned everything with salt and pepper. I cooked the seafood slowly and gently over medium heat to make sure nothing overcooked while I made the luscious seafood sauce. I began the sauce with 1 tbsp of melted butter. I sauteed 1/2 finely minced shallot and 1 clove of garlic, finely minced as well. After cooking gently over medium heat for a couple of minutes I added 1 tsp of lobster pate which I found at my local grocery store. If I can find this, you probably can too! Just look in the section where you would pick up tuna. I also added 1 tbsp of tomato paste. Stir everything together. Add 1 tbsp of flour and mix to combine for at least 2 minutes, stirring the entire time to cook out the flour without burning it. Drizzle in 1/2 cup of white wine, slowly stirring as you go to start bringing the sauce together. Then add 1/4 cup of clam juice and then a 1/4 cup of milk or cream. Take the pot off the heat and add 1 tbsp of sour cream. Stir to combine. Taste the sauce and check for seasoning. Season to taste. First fill the potato skins with seafood, then ladle in the rich sauce and top with a slice of a good melting cheese. I used my favourite, Havarti. Put under the broiler until the cheese melts and everything becomes gooey and divinely delicious! I love how the potato is super crunchy and disintegrates under my knife and fork, allowing for the seafood and sauce to ooze out onto my plates, held together briefly by cheese. 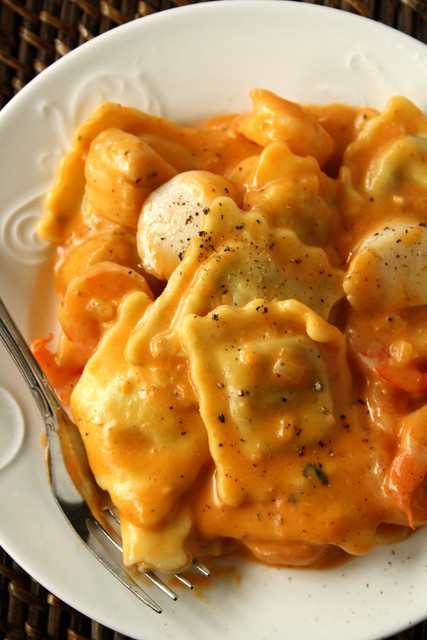 Because it was just me indulging in this seafood treat I had lots of seafood and sauce left over. I decided to add some sriracha hot sauce to the seafood sauce for some heat and slather it over the seafood and some goat cheese and spinach ravioli. Divine! This made one of the most delicious pasta dishes I have ever eaten. Love it, the recipe that keeps on giving!

This is the kind of food I think of when I remember
my trip to Prince Edward Island.