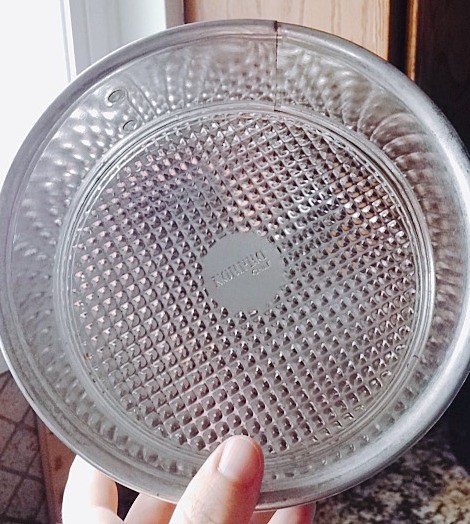 Foodie Update: I just made this cheesecake for the third time and it was raw in the middle so I can no longer vouch for this recipe. If you do try it, try pressure cooking it for at least 45 minutes. The only thing I changed was putting a piece of parchment on top of the pan to avoid water from getting inside.

When I discovered Bruce Weinstein and Mark Scarbrough making desserts in their online class Make The Most Of Your Pressure Cooker at Craftsy, I knew I had to try making one. I turned to their cookbook  The Great Big Pressure Cooker Book: 500 Easy Recipes for Every Machine, Both Stovetop and Electric for inspiration. I wanted to bake in my Instant Pot! 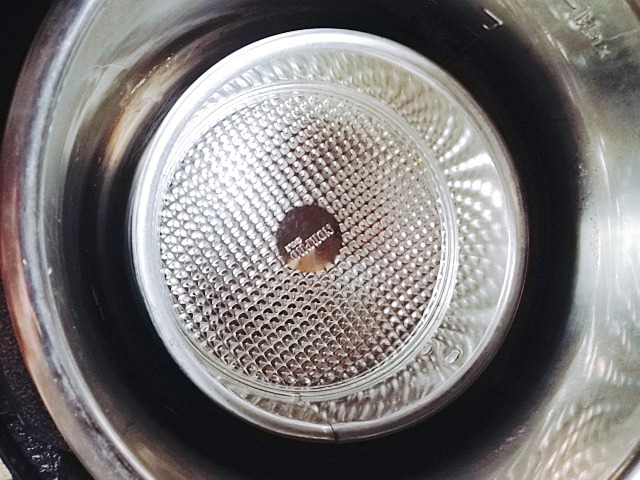 I went to all sorts of stores searching for a 7″ spring form pan but with no luck. Then one day I discovered this pan at Value Village for $2! Sweet! 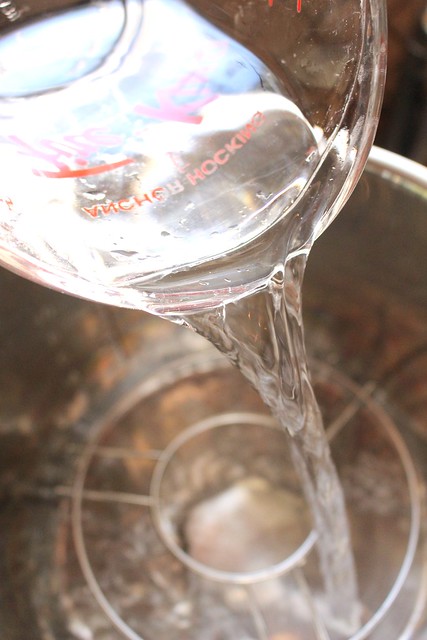 To prepare the Instant Pot for the process, first you are going to want to add 2 cups of water to the pressure cooker and then place the rack on the bottom. 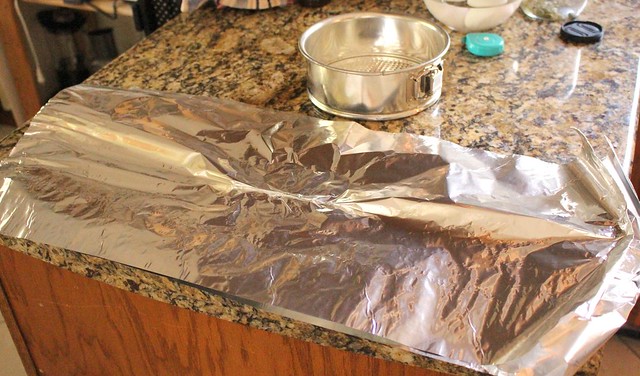 You are also going to need what they refer to as a “sling” so you can get the pan out of the pressure cooker once it has done its magic.

You want two pieces of tin foil that are two feet long stacked on top of each other. 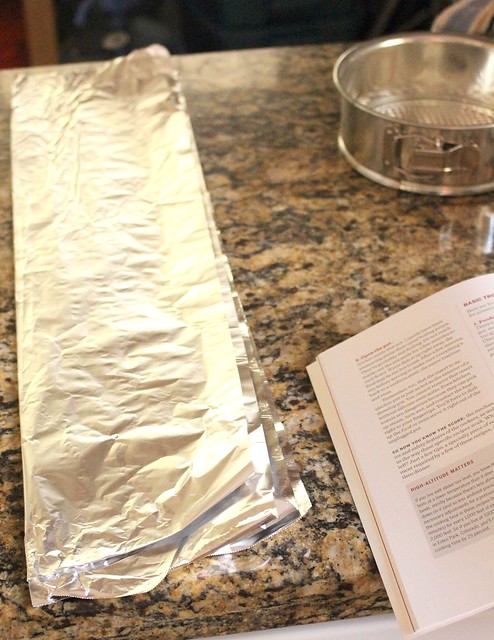 Fold in half lengthwise so you now have a long sling that is four layers thick. 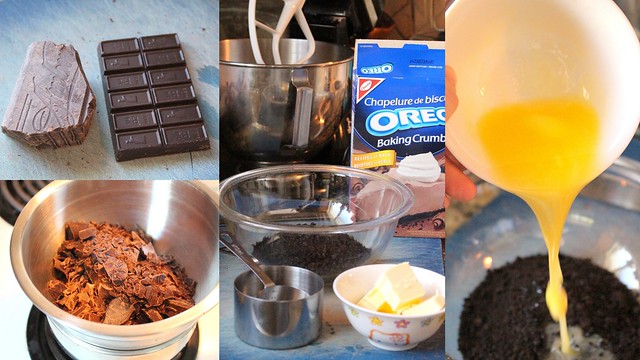 I prepped the chocolate ahead of time by chopping up 8 oz of dark chocolate (mine was a mix dark and semi-sweet because that is what I had) and melting it slowly in a stainless steel bowl over over warm water.

To make the crust, I combined 1 1/4 cup chocolate baking crumbs and 5 tbsp of unsalted melted then cooled butter. 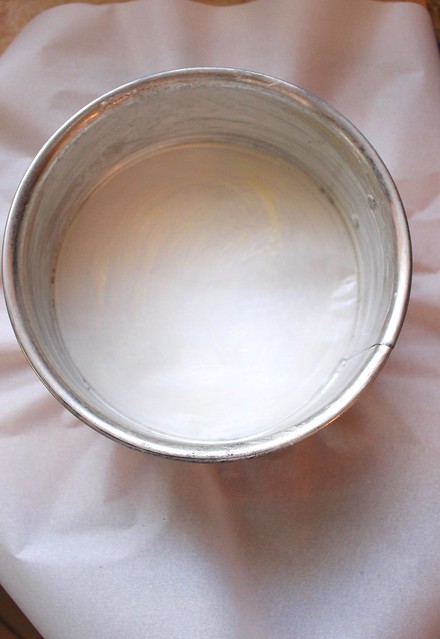 I had never used this pan before and it was second hand so to be safe I added a layer of parchment to the bottom to help avoid leakage. Then I greased it and trimmed off the excess. 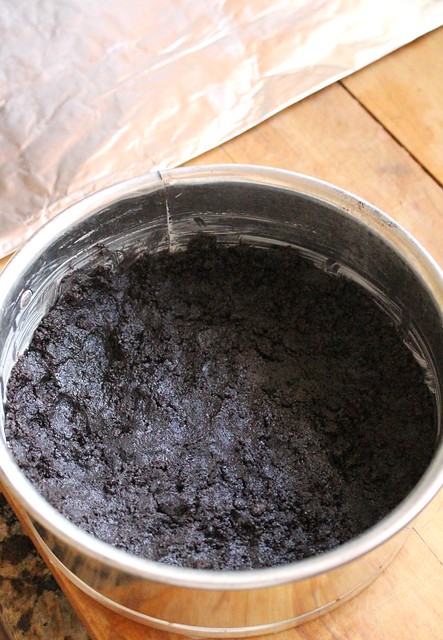 I added the chocolate crumb butter mixture to the bottom of the pan and up the sides a little. 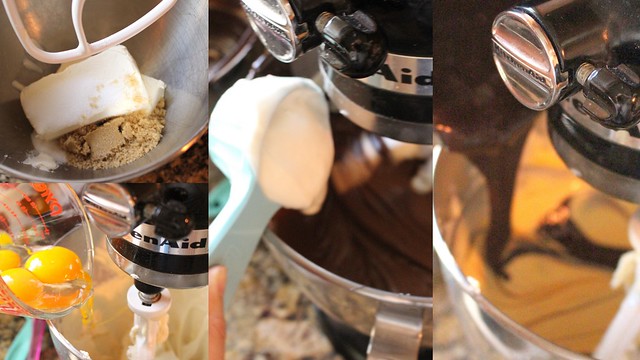 To make the filling I used my mixer but the recipe is written for those who have a food processor only. This is how I made it.

Consistently scrape down the sides of the bowl after each addition. 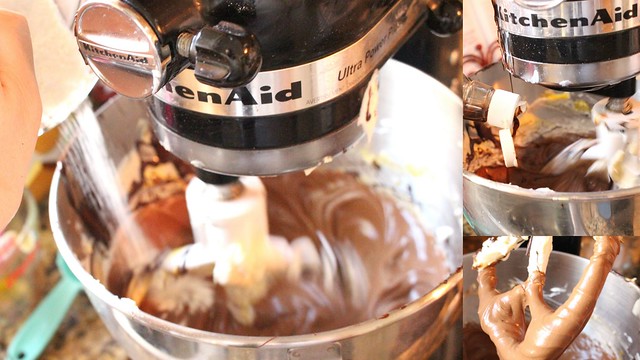 Add 1 tsp vanilla extract and 1 tbsp flour with a pinch of salt in it. Seasoning does not occur in their recipes often but a little salt is important so I added it to the recipe. 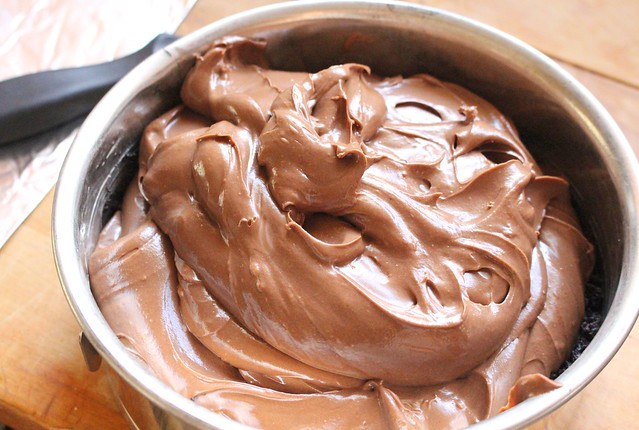 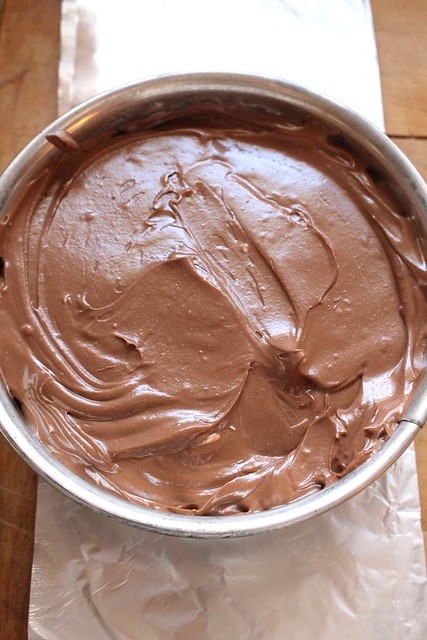 Smooth down top with spatula. Place pan on sling and then move and lower carefully into the pressure cooker.

Please note: Several people have written saying that water has gotten into their cheesecakes so make sure to add an additional layer of foil to prevent water from getting into the batter! 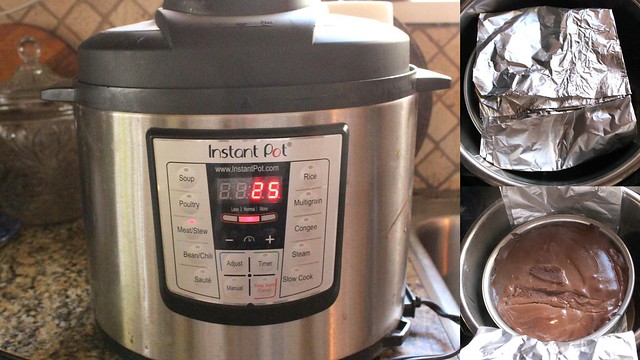 The recipe said to crimp the sling’s ends inside. I did not really know what that meant so I just folded it over the top. 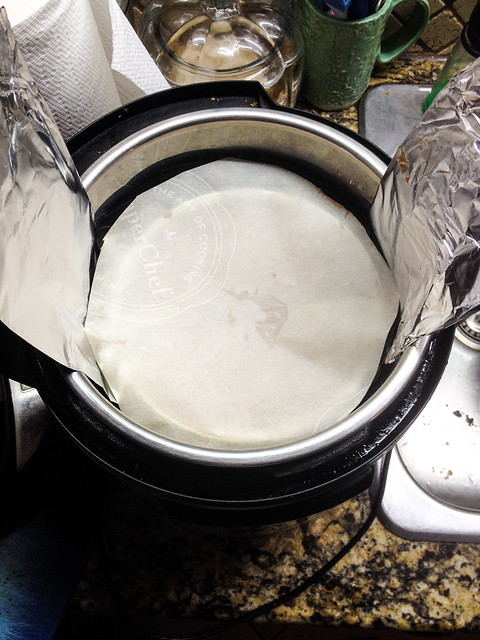 Update: I am trying to do this recipe with an over-sized piece of parchment paper on top of the cheesecake pan to avoid water from getting in and foil from touching the cake…

You are supposed to set your electric pressure cooker to max pressure for 25 minutes. Every setting appeared to be normal on mine so I used the meat setting.

Let it do its magic and then unplug the machine and let it return to normal pressure for 12-16 minutes. 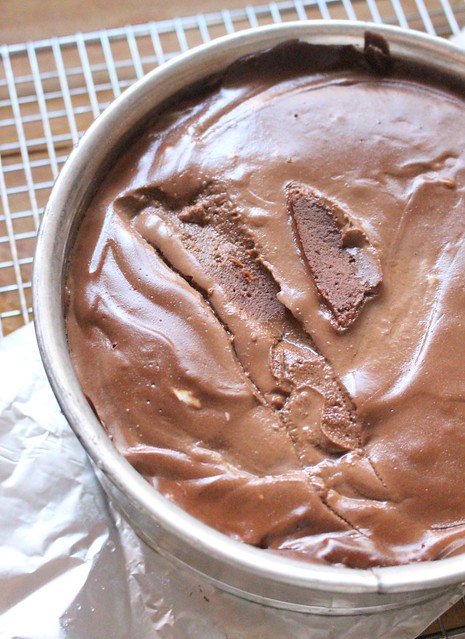 Unlock and using the sling transfer pan to cooling rack for one hour. Unfasten, loosen and remove the collar of the cake. Let cake come to room temperature and then chill in the fridge overnight.

By folding the sling over the cheesecake, it kind of messed up the top of my cheesecake but I was not too worried. I just wanted to see if it actually cooked through. 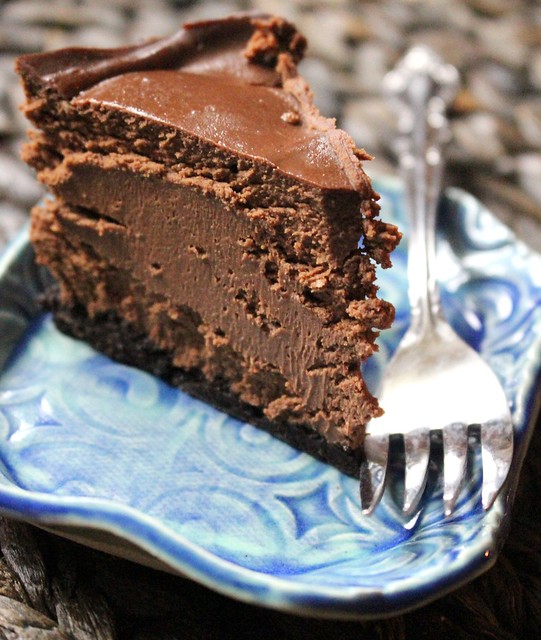 Damn! Damn! Damn! This was soooooo good! Seriously. I usually find baking cheesecakes to be a bit of a pain so I do not make them very often but this was actually quite easy and fast. Yes, I had to make a sling but so what?

This cheesecake is absolutely delicious. So rich! I can see why you are supposed to use all dark chocolate, I will do that next time for sure. You really should not eat this without having a big mug of coffee or tea close by to help melt the decadence of this treat while you eat it.

I actually like the size of the cheesecake and do not mind that it is a lot smaller than other ones I have made in the past. We can only eat this one little piece at a time anyway so now nothing will go to waste.

I am beyond thrilled to have found a way to bake in the summer without turning on the oven. The fact that it did such a fantastic job excites me even more.

I give this recipe five out of five wooden spoons. It is foodie perfection.