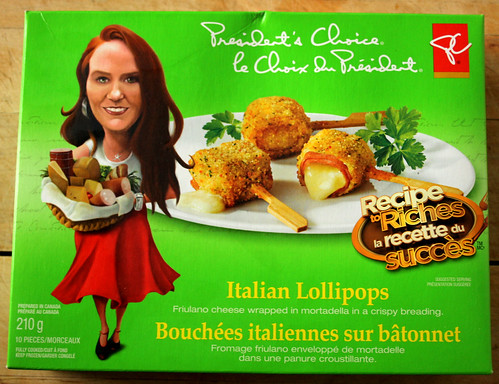 Congratulations Elisa Hendricks for winning the appetizer category on Recipe to Riches with your Italian Lollipops! You can watch the episode here and find her recipe here. 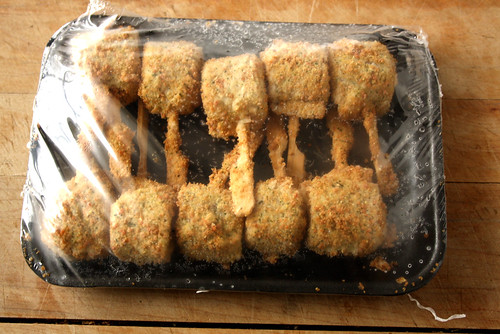 “If Italians had lollipops, they’d be made of meat and cheese!” This is a saying in Elisa’s family and she turned it into a reality despite a ton of pressure to change the name and the presentation.

In one box you receive 10 of the “lollipops” for $9.99. Which I immediately cringed at. That seemed like a lot of money, working out to a dollar per pop. On the show they were much, much larger. This made the experience of opening the box a bit of a disappointment. 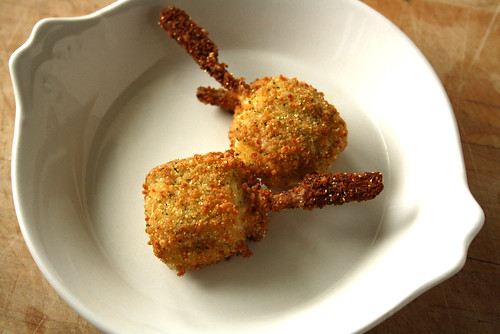 This appetizer had to be baked in the oven. There are no instructions for microwaving it.

Notice the skewers are completely breaded. It made me think that they just could not come up with a way to deep fry the product first and then skewer them so they did it all at once. 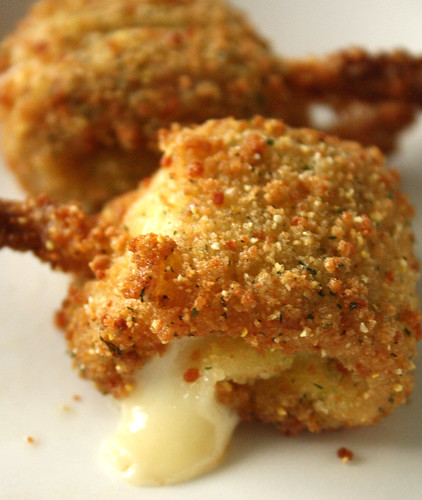 As I started photographing the Italian lollipops the cheese started to ooze. Yum! I am actually unacquainted with both the Friulano cheese and mortadella. On the show they referred to the product as a deep fried ham and cheese sandwich. 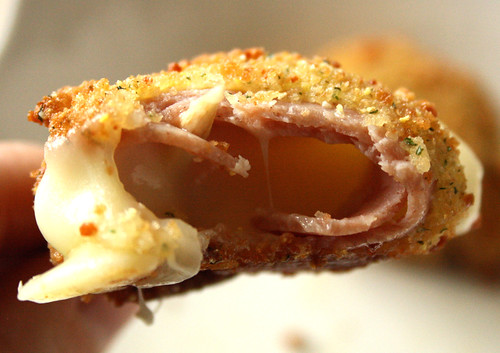 Reg attempted a bite but it had too much pork product for him but I of course ate his as well as my own. It is clear that the cheese and the meat are very high quality. I was expecting it to be super salty like a lot of store-bought appetizers are but it wasn’t. In fact, I might suggest a little more seasoning. 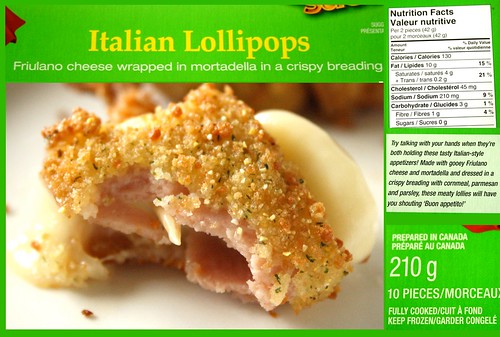 When I bit into the Italian Lollipop I immediately hit the skewer which was unpleasant. Because the skewers were covered in breading, my hands got all gritty and greasy. This would make for uncomfortable serving at a party. The use of skewers did not give me a lollipop feel so that was a bit of a fail.

What is a win is the flavour. It was more subtle than I was expecting but the high quality ingredients were impressive. That cheese was fabulous, I am totally going to have to look into finding some Friulano. The mortadella was light but tasty and went superbly with the cheese. The quality of ingredients could be why the product is more expensive than I was expecting.

I know what Elisa was trying to accomplish with her meat lollipops and it appears that trying to get her idea to work in an industrial kitchen resulted in a few compromises that strongly impacted my enjoyment. I personally would not give these to a child because of the skewer and the whole point they are on them is to make them more lollipop-style. Still, the flavour of her father’s recipe is still there and it was quite delicious.

Normally I would not take the mechanics so much into account but considering the name, it was unavoidable. Taking all that into consideration, I give this product three and a half out of five wooden spoons. It is quite expensive, awkward to eat but the flavours ring true.