I was thrilled when Winslow Taylor was announced as the Recipe to Riches Entrée Winner. His Jammin’ Jamaican Lobster Bisque looked so flavourful and was such a bold choice for a potential project, I wanted to see him win. I wanted to try that bisque!

Update: a friend tweeted me that she tried the Recipe to Riches Jamaican Lobster Bisque and really hated how hot it was and that it was inedible for her! So be forewarned before you decide to pick it up, it is DAMN hot! Inside the box you get 1 220 mL serving for $3.99 which sounded more than reasonable to me. I did not want to lose natural light by putting the soup in the oven and cooking it for 25-27 minutes so I lifted the edges and put it in my microwave on high for 2 minutes. Then I peeled off the film and microwaved on high for 40 seconds. As the soup heated I checked out the packaging. I love that they included Winslow’s story of being an army veteran who served in Afghanistan. I also wanted to check and see how spicy this dish was going to be and when it was confirmed it was made with Scotch bonnets, I started to get very, very nervous.

On the front of the box near the bottom left hand corner you will see two peppers in a little circle with “Medium” next to it. I personally would have made the peppers red, they do not stand out and I just had a feeling a warning was going to be necessary. The packaging was not very attractive and I wanted to show off the soup as much as possible so I put it in a little bowl. Sadly, this did not show off the bisque very much at all! So I swept a soup spoon through and there was the money shot! Yes! Lobster. Yum! The butternut squash gave the broth such depth of colour and the scent of all those spices drove me crazy. Sadly, the soup was not hot at all! I had to put it through the microwave again for it to be at an edible temperature. 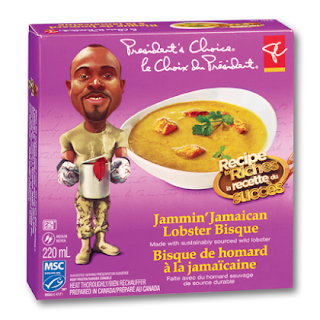 Kick-me-in-the-foodie-ass hot and delicious! Damn! This dish was spicier than I could handle but I did not care. The flavours were absolutely incredible and I wanted each bite as my tears welled up. I had to run to the kitchen to get paper towel to blow my nose but I did not care. It was wonderful! The flavouring so complex, the lobster surprisingly tender and that light wonderful bisque texture that I adore so much made this perfect.

Those of you who are used to spicy foods probably will not bat an eyelash but for me? It took me to the edge and I am glad I went for the whole ride. I would not only buy this for $3.99 I would order it in a restaurant. Just be forewarned that this is a spicy product otherwise you will be in for quite the surprise.

I am totally impressed with this product. I give it five out of five wooden spoons. Delicious and exciting! An absolute winner. I still do not see it being an entrée but as a stand-alone product? Who cares? It rocks!