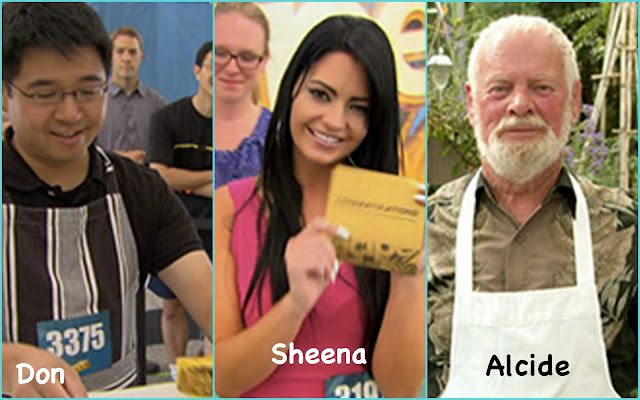 This week on Recipe to Riches there was some serious competition for who had the best savoury pie.

Immediately, I wanted to try all three pies. They all looked like good contenders to me. Don from Ottawa, Ontario, made his curry take on a traditional meat pie that he named Blasphemy Tortiere. Sheena from Parksville, British Columbia, shared her Enchilada Pie. Alcide from Welland, Ontario, made his traditional Acadian Meat Pie. This week we had Indian-fusion, re-interpretation of the term “pie” and a 100% traditional take on a savoury pie, all of which were exciting. On top of that, we had coast-to-coast Canadian participation!

The Kitchen Commander had to bring drama to each one of them which impacted each recipe as they made 100 pies. Rob Rainford told Sheena said a real chef would not use canned tomato sauce so she had to make hers from scratch. Although I agree that her homemade recipe should have a sauce she had made herself, that is not an industry standard issue. That made it feel contrived.

Alcide thought his job was going to be a little easier than he had imagined because he did not have to remove the bones from the chicken but then discovered that both the chicken and the pork would come into a commercial kitchen deboned. As a result, that would impact the flavour and sauciness big time.

Don was told that Vikram would never use store-bought Masala so he would have to make his own from scratch. Again, that did not feel like a commercial kitchen issue and just an additional foodie
challenge for the contestant.

Despite the curveballs that came their way, I feel everyone did a great job. I also found it ironic that Sheena had an emotional moment and was told that it was unacceptable and yet Alcide teared up in the show a lot and no one told him to suck it up. There was a small hint of bad sportsmanship in one small moment of the show but other than that, it was very positive which I continue to be thrilled about and impressed with.

No spoilers yet about the winner from me yet but I will say I am so happy with who won and which product I get to review although all of them looked delicious. I disagree with the judges that it is a seasonal dish. I would eat any of these savoury pies any day of the year.