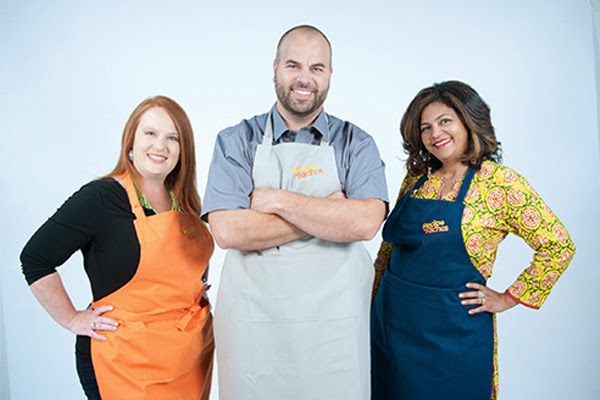 Please Note: This Recipe to Riches post is going to be a little different. So much happened during the marketing campaign which occurs near the end of the show that I have to put up this SPOILERS warning! I will be discussing the latter half of the episode and reveal this week’s winner. You have been warned!

Every week I am impressed with the contestants on the show but this week they were even more adorable than usual. Elisa from Gibsons, BC, teared up every time she mentioned the word family. Sean from Newmarket, ON, dreams of winning the contest so he can finally go to culinary school. Karen, from Markham, ON, whose zest for life was completely infectious.

When it comes to the food, Elisa brought her father’s Italian Lollipops, Karen brought her Bollypops which are sweet and spicy potato and chicken balls and Sean brought his flavourful Mainlander Fish Bites. 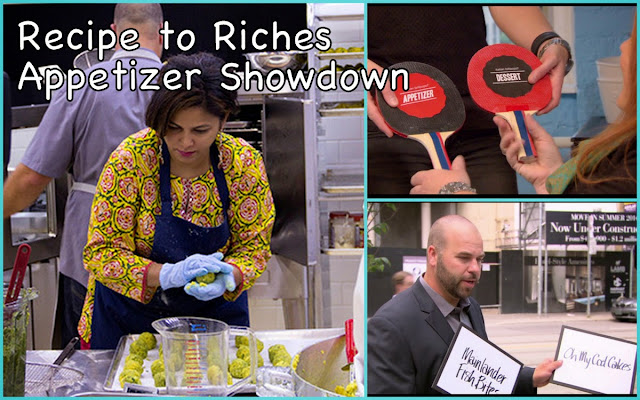 Elisa was stopped by Kitchen Commander Chef Rob Rainford because commercial kitchens are not set up to shallow fry so she had to deep fry her “lollipops” which impacted the presentation and the size of her dish.

It was hard enough for all the contestants to get 500 appetizers each. Sean was told that he had to make 1000 because his fish bites were so small.

Karen was told there was no way to get the chutney into the centre of her Bollypop so she would have to come up with another way to create the flavour. But that is where my sympathy ended for Karen. She seemed more focused on having fun than getting serious. When Chef Rob started to get angry about her relaxed approach, I totally agreed with him and I think it is what did her in because she did not end up having enough time to deep fry her product long enough. If Sean could hand-create 1000 fish quenelles, she could have had her 500 appetizers done.

Each week when the competitors have their marketing homework to go out on the streets of Toronto to do a little test, I usually roll my eyes. Elisa’s test was to find out if people think of desserts or appetizers when it comes to the term “lollipop”. Duh! Yes, people thought of desserts. I guess they were really trying to drill it into her that they thought her product’s name was inappropriate. Which she ignored.

Sean on the other hand really did not want to give up the name Mainlander Fish Bites for Oh My Cod Cakes but when everyone he asked responded positively to the name, he relented. 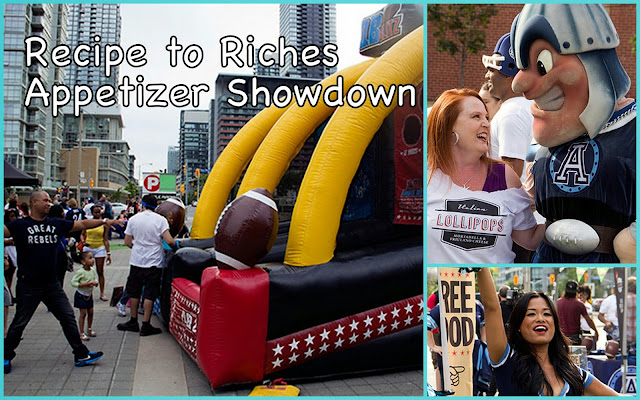 Then it was time for the taste testing to begin and the setting this time was inspired by the Toronto Argonauts. Sean’s approach was to do an outdoor man cave with cheerleaders and sports. I immediately hated the idea but must say that the venue looked complete and that men and boys were having fun whereas I am not really sure what Elisa’s approach was.

I know she was not happy with how close their two venues were and they managed to sort that out but other than giving kids deep fried ham and cheese on a stick, I really do not understand the theme of her venue at all. I was also surprised she had a friend out there doing a lot of the directing and potentially starting drama by accusing the other team of stealing.

During judging I was so relieved that Arlene Dickinson mentioned the one-sidedness of Sean’s marketing ploy and that she felt this was a product that women would really love (I nodded my head vehemently as she spoke). She also mentioned that Elisa’s product was one she thought men would love but she marketed it to children (I nodded again).

Sticking To Your Foodie Guns

Sean listened to his marketing team when it came to the name and the event… and lost. This seems to be a recurring trend on this show. Elisa stuck to her original name and idea for her product and won.

This was a complicated episode and I bet figuring out who the winner should be was a tough one. I personally wanted to product test the fish cakes more because they were a healthier product and I have always wanted to try salt cod. That said, I guess I will find out just how tasty, ooey and gooey Elisa’s Italian Lolipops are.