You are here: Home / Uncategorized / Recovering from Christmas I bought this turkey platter with my friend Colleen when I lived on Vancouver Island. Our transfer to Nova Scotia came through and I thought of how Reg and I would be buying a house and have a real home with big holiday dinners… I was so excited. This past Christmas was probably our last in Nova Scotia. My next Christmas will probably be spend cooking in a tiny galley kitchen in an apartment. As a result, I was determined to roast a whole turkey. I even went out and bought an oven-safe thermometer ahead of time. I made a compound butter which I slathered over the fresh grain-fed turkey I got and popped it into the oven.

The turkey was in the oven for more than four hours and the thermometer was barely moving. So I turned to my Facebook friends for help: 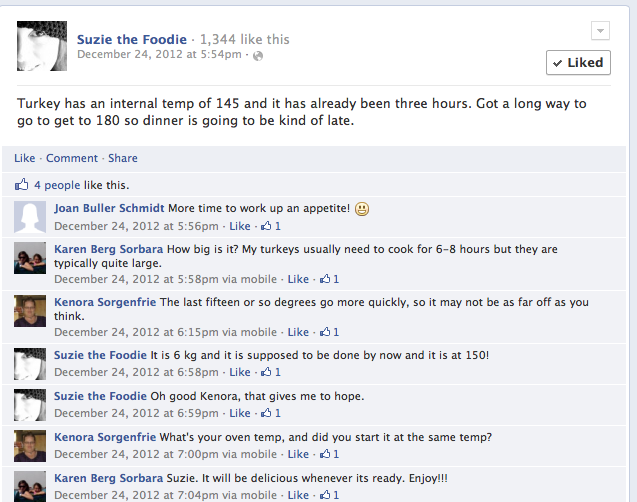 I had done everything right. Yet I sensed dread. Horrible dread. Six hours later, this was my turkey: I carved off the breast, started making gravy after putting the turkey on a wooden carving board.

Warning! The following is not for the weak of stomach!

Then I noticed, what I thought were turkey “juices”, all over my counter, creeping up to the apple pie. I know that cooked turkey juices were supposed to run clear. This was not clear. It was bloody.

I quickly moved the turkey to the counter near my sink and removed said “juices” from the other one and disinfected it as best I could. What the fuck was happening? I looked inside the turkey which was empty, I wanted it to cook faster so I left it hollow. It was filled with bloody juices. Then I noticed the bottom of the turkey looked raw. Oh…. my…. God…

Reg came upstairs and I knew that this was not going to be a fair thing to do but I had to share everything, full disclosure as to what I think had happened.

“For some reason, the top of the oven worked but the bottom cut out. So the chicken breasts are technically cooked but I can’t promise that they have not been contaminated.”

Reg looked unbelievably uncomfortable. I knew there was nothing he could do but he had to know the situation.

“If we eat this, we could get sick. I think it is fine but there are no guarantees.”

Reg says, “You know I know nothing about this kind of thing.”

“Yes. I know. But I have nothing else to eat, you said you can’t get pizza on Christmas Eve so we can take a chance and eat this and I think we will be fine or…”

Reg was already really sick with a cold. The idea of adding food poisoning onto his cold scared the hell out of me. But I knew the turkey breasts were cooked. I had a feeling we would be OK but I was terrified we would end up in the hospital on Christmas day.

So I made the call. We ate it. And luckily, we were fine. But I do not recommend doing this!!!!

I have no idea what happened to my oven. Why the hell did the bottom element refused to work that day? Maybe it blew a fuse? But it worked fine the next day. All I know is I spent the rest of Christmas Eve fighting with a bloody turkey to break it down. There was blood running down my dishwasher, over the counter, all over my clothes… It was a foodie Amityville horror show.

It was such a big bird that I could only get the breasts and wings off. I was just not strong enough to do anything else. I finally made a family Christmas dinner and it was a disaster, just like so much of my life on the east coast has been. I decided to slow cook everything I could salvage in my giant slow cooked and it could barely hold the meat I saved. I added some flavourings, covered with water and put it on a low 10 hour cooking mode. If that didn’t make it food-safe, I had no idea what would.

I put the rest of the raw carcass on a board and took it down the stairs to throw into the compost. As I fumbled to go outside, getting covered in more blood-juice, Reg asked if it would attract animals, being out there. I dryly laugh. No bears in this hood and to be honest, I just said to him, “I don’t care” as I went outside. I had to fight with the frozen compost container to get it open and said, “I’m sorry” to the broken raw carcass as it slid into the darkness and hit the bottom with a thud. The next morning awaited a beautiful turkey stock and we awoke to be food-poisoning-free. I suppose that was our foodie miracle of the year.

I learned a lot from this experience:

This next year is going to be full of changes for me. I can promise you that my blog is going to be very unpredictable. I may disappear for long periods of time. I may write from the road. I have no idea. My heart may be too scared and broken to let my body eat.
I just hope I can continue food blogging and that you will be there for me, even if I have a tiny kitchen and my food photos suck.

And yes, I am totally throwing out that damn turkey platter.