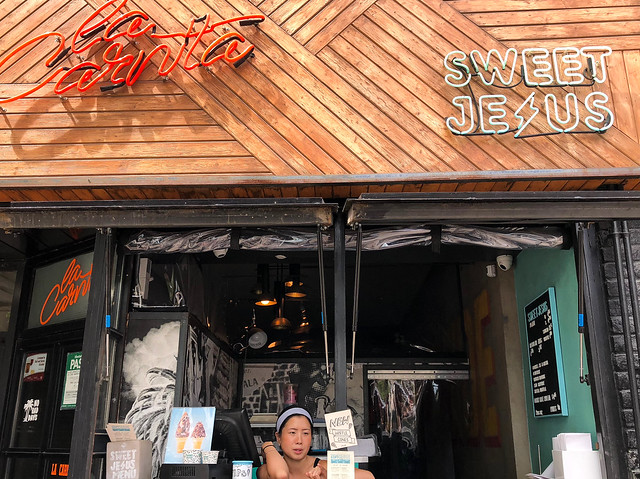 Ever since I heard the name Sweet Jesus and saw their astounding soft dipped ice cream on Facebook I wanted to go and experience it for myself. Back then I was in Vancouver absolutely enthralled by their ice cream. When I got to Toronto I said the first place I was going to go was Sweet Jesus. It was January. They were not open. Then I fell down the stairs.

The first foodie adventure I went on as soon as I could was this past weekend to their Queen Street location. This was just days after I found out they were expanding to… You guessed it. Vancouver! 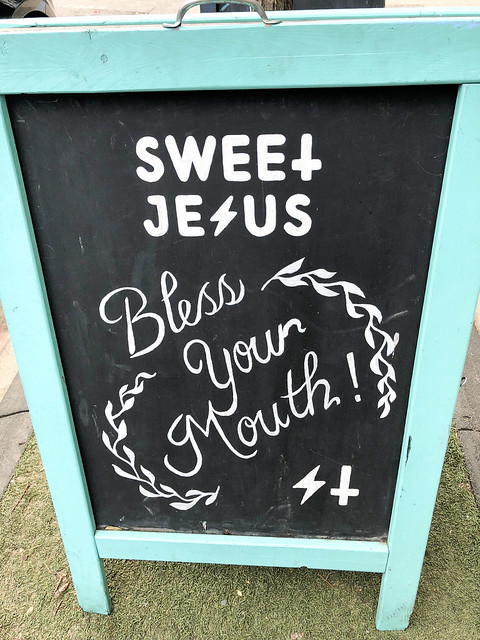 There was a particular day I wanted to go that felt “right.” It was the six month anniversary of me leaving Vancouver. I honestly did not know if I was going to make it six months in Toronto. Yes, the day came and I was here and said I am going for ice cream! 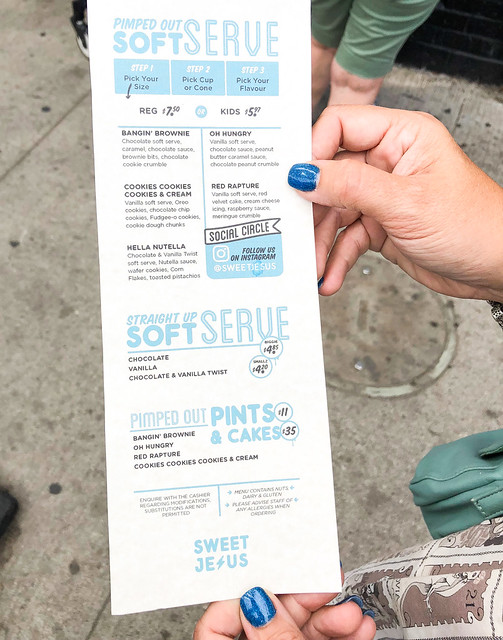 For those who want just regular soft serve, you can get it, but I wanted the whole package—so I ordered Hella Nutella: chocolate and vanilla twist soft serve, Nutella sauce, wafer cookies, Corn Flakes and toasted pistachios. 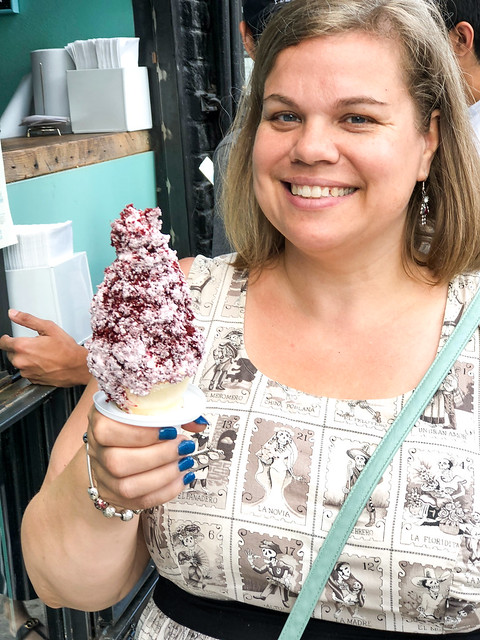 Sylvia was kind enough to come with me on this adventure (check out her super cool skull-inspired dress) and ordered the Red Rapture: vanilla soft serve, red velvet cake, cream cheese icing, raspberry sauce and meringue crumble. She and I are family and I was so excited she said yes to enjoying ice cream with me on the weekend. 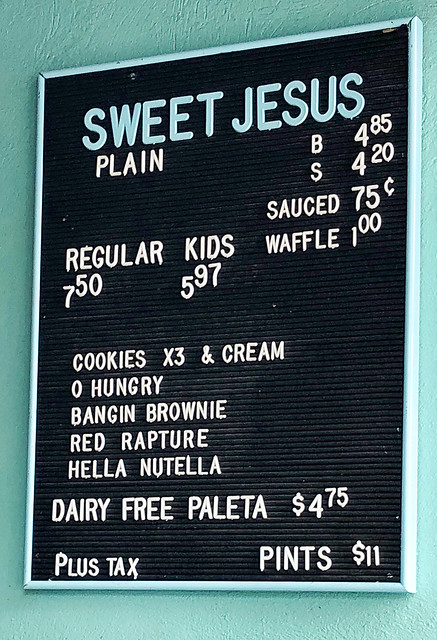 Another reason why I wanted to go was that recently the ice cream place was under fire from religious groups wanting them to change their name which is ridiculous. This is Sweet Jesus’ reasoning behind the name choice:

“Our name was created from the popular phrase that people use as an expression of enjoyment, surprise or disbelief. Our aim is not to offer commentary on anyone’s religion or belief systems…” 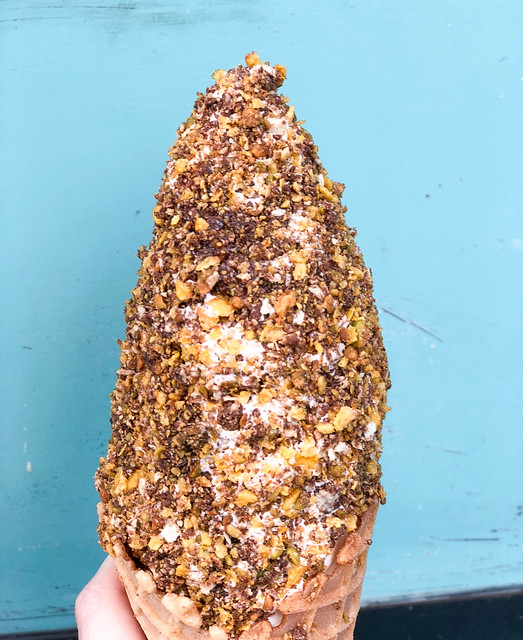 I gotta say my Hella Nutella looked very similar to the one on their site. 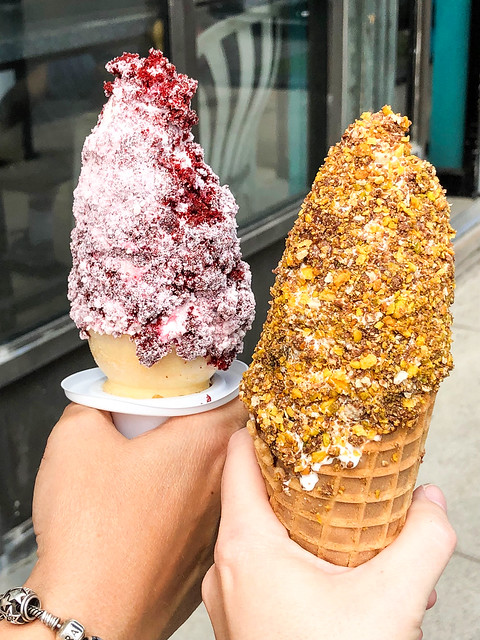 I think Sylvia’s looked even better. The hard part was NOT snacking on the ice cream until we got to the park so we could sit and enjoy it in the shade.

On the way there a very posh woman in a luxurious car asked me where we got those and I was happy to be the foodie ambassador for Sweet Jesus and show people the light. 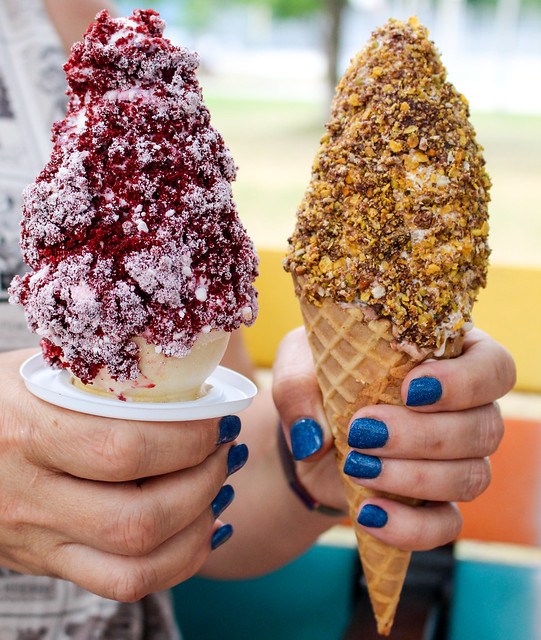 Thankfully it was a cool day because otherwise, these would NEVER have made it to the park. As I was trying to eat it a breach in the integrity of the coating resulted in a major landslide. 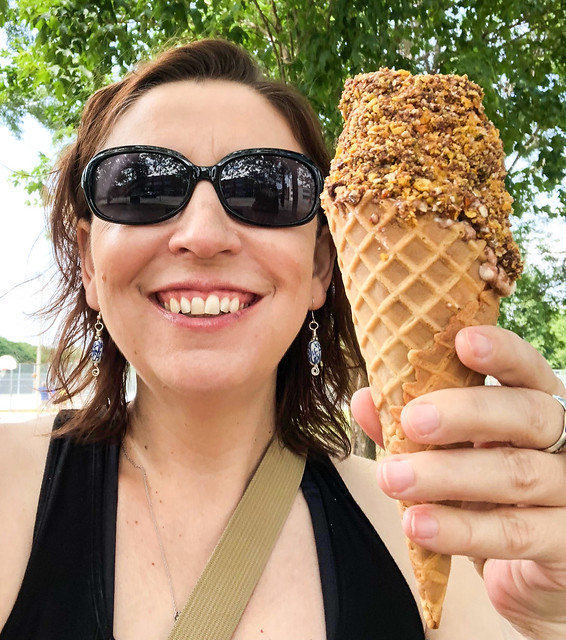 Before the foodie chaos

I got ice cream on my purse, my pants, my legs, the bench, the ground… I literally could not eat it fast enough. It was complete chaos and thank goodness Sylvia had picked up extra napkins because I was a total disaster. She had a cone shield so hers remained intact while mine was a hot/cold mess.

That said, I enjoyed the flavours. I am glad mine also had chocolate soft serve or I may have found it boring. It went great with the Nutella and pistachios. It was total chaos but fun and interesting to eat. Next time however I will devour it right away so I don’t make an ass out of myself. 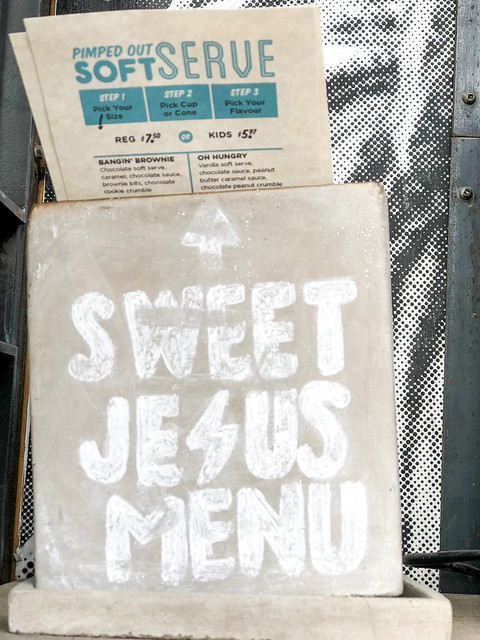 Believe it or not we both ordered the kids size and that was Sylvia’s most significant complaint. It was too much so that leaned towards false advertising a little. She let me have a taste of hers and I am so glad they included the raspberry sauce because Red Velvet can be boring to me but that sauce brightened it up significantly and made it more interesting than I was anticipating. 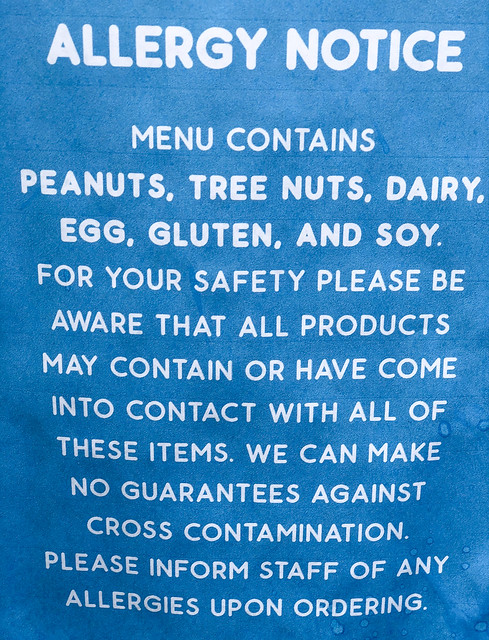 Sylvia gave her experience with Sweet Jesus three out of five wooden spoons. I give it four out of five wooden spoons. My biggest complaint is the integrity of the ice cream. That was a lot to pack on to something that was soft. Unless perhaps having it slide all over your clothes and skin is supposed to be part of the foodie experience? Personally that does not appeal to me at all.

Unlike a lot of the online reviewers I did not feel that I was overcharged at all. We paid $6 for our cones and the ingredients were high quality and tasty. Pistachios are not cheap! I think the price is more than fair. I have paid more for less.

Yay!! I did it! I got to Sweet Jesus and am so grateful to be around to tell the tale and have such lovely company on my first true Suzie The Foodie Adventure.