I made this bisque from the cookbook True Blood: Eats, Drinks, and Bites from Bon Temps that my friend Kelly sent me back in November. 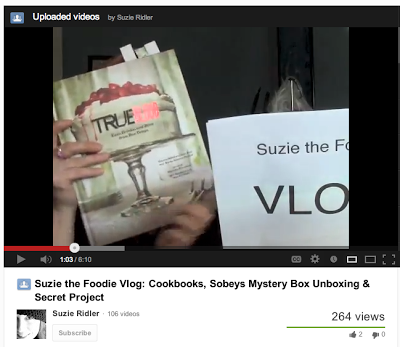 I talked a bit about it on my most recent vlog post. I don’t think I have ever been so excited to receive a cookbook before. It is spooky, beautiful and based on one of my favourite TV shows. Mixing food, TV and the supernatural together is the coolest idea for a cookbook ever! But would the recipes be good? That was the question!

“I ache for Talbot whenever I think of his warm bisque garnished with a flourish of English rose petals.” ~ Russell Edgington Trim, peel and dice 3 or 4 medium beets. I personally did not use gloves. I am not squeamish or weirded out by my hands getting a little stained for a day or so. It almost seemed inappropriate for this True Blood dish to wear gloves! Saute 1 cup of minced yellow onion in 2 tbsp of olive oil in a large saucepan over medium-high heat, stirring until softened, 6 to 8 minutes. I seasoned them at this point but if you want to follow the recipe, add the salt at the end. Cook, stirring for 5 minutes. Add 1 cup of water and 1 tbsp of fresh lemon juice. Bring to a boil, reduce heat to medium-low, cover and simmer for 20 to 30 minutes. Remove from heat and let cool slightly. Russell recommends using an immersion blender which, for me, never works. I used a blender instead to puree the soup. This soup is extremely light and almost refreshing. I thought the beet flavour would be overwhelming but it wasn’t. My only complaint is how thin it was. I would personally cook mine down a little longer and maybe without the lid on so it could reduce more. To add some body to it, LOL, I added some heavy whipping cream to the soup when I had it the next day.

We were surprised at how subtle this beet-red soup was. Almost, delightful. I think Talbot would be proud of my results, despite the lack of rose petals.