You are here: Home / Toronto / Chef To Chef with Mark McEwan Launch Switcharoo 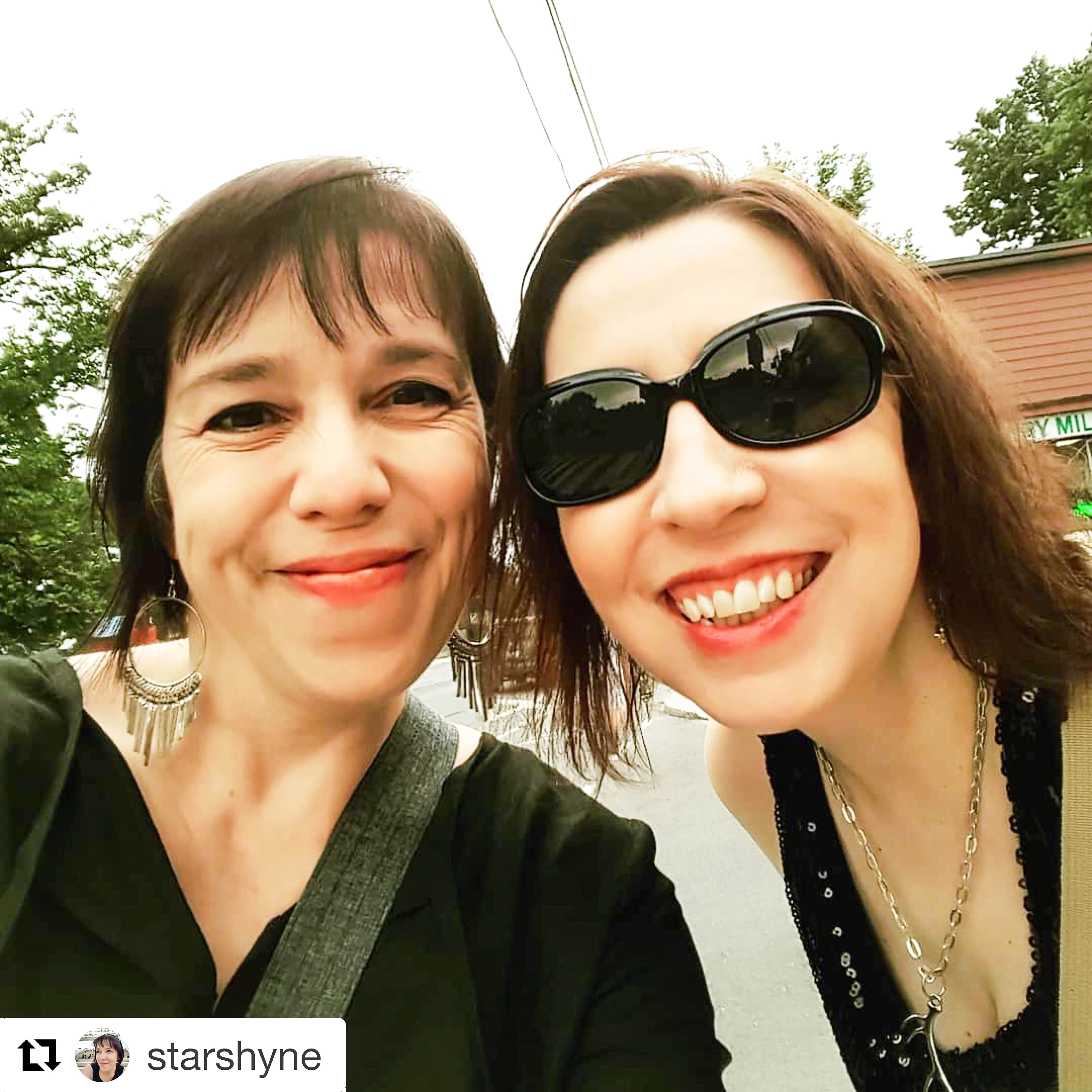 I was graciously invited to cover the launch of Chef To Chef with Mark McEwan hosted at Centennial College Event Centre and I was so excited to go with my sister Jamie! The show has Chef McEwan talking to other chefs about their journey to becoming who they are as chefs. It sounded fascinating and the food they were serving looked like it was going to be absolutely delicious. Well, to me. Not exactly Jamie’s taste unfortunately but she was a trooper and said she would be my photographer. 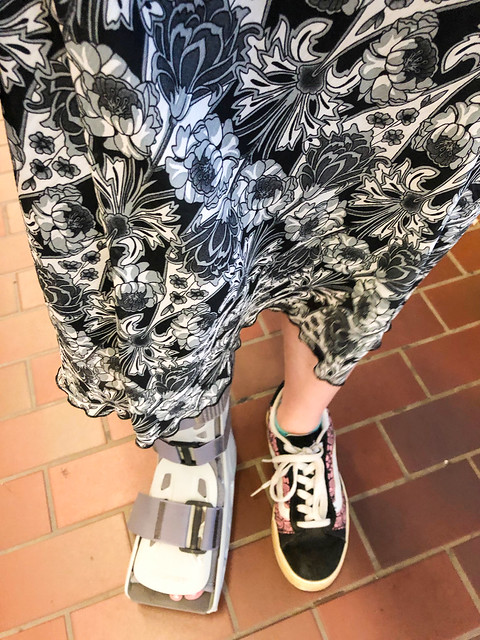 But look! I was wearing a skirt! And a sequinned shirt. For this tomboy, that is getting seriously dressed up. 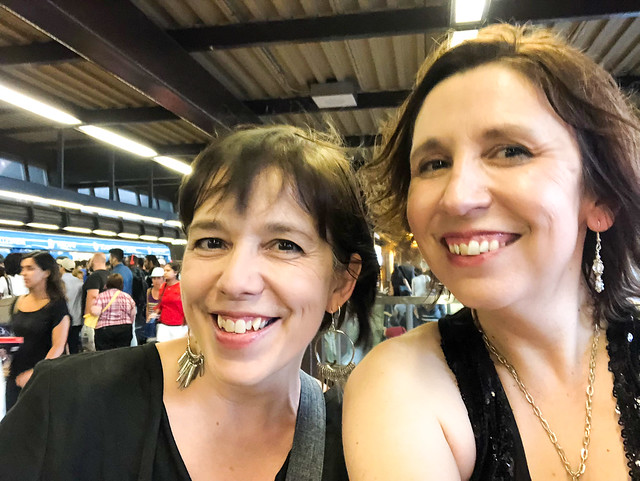 I should have realized fate was not on our side when we got stuck in a tunnel with the emergency alarm going off. In all our years on the subway, that has never happened to either of us. Eventually, we got all the way to the LRT and man, was it busy. As much as we are smiling here, we were also getting seriously worried about the world turning black outside one window. 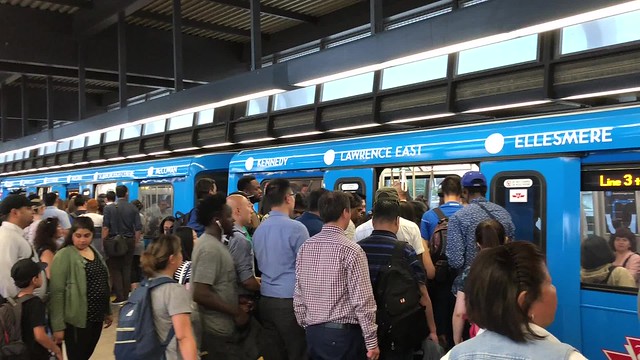 It was rush hour and, with my mobility issues, getting onto the LRT was going to be more than a little challenging. It was so busy it would be almost impossible.

Then, lightning literally struck. A big bolt of lightning flashed, the sky opened up and the rain came. HARD. 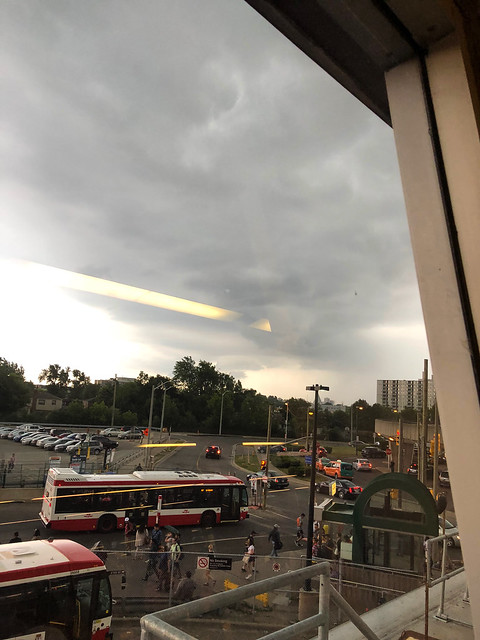 And this (see above photo) was was heading towards us threatening to intensify the storm already over us. I thought about sitting in a metal tube during a notorious Ontario thunderstorm. Then I thought about having to wait in the rain for the bus at night and how I already had laryngitis and did not want to potentially develop my third case of pneumonia. Considering my luck these days, we called it a night. 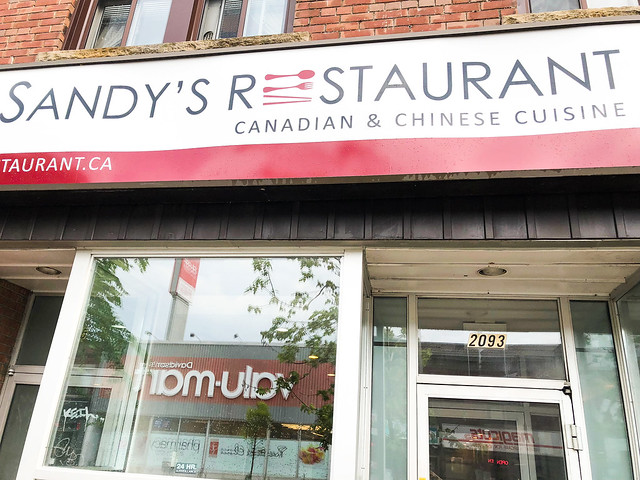 I suggested we stopped by Sandy’s Restaurant for some dinner. The last time I had been there we were all taking care of Mom when she was sick. After that, both my sisters had a not very positive experience with the food and never went back. 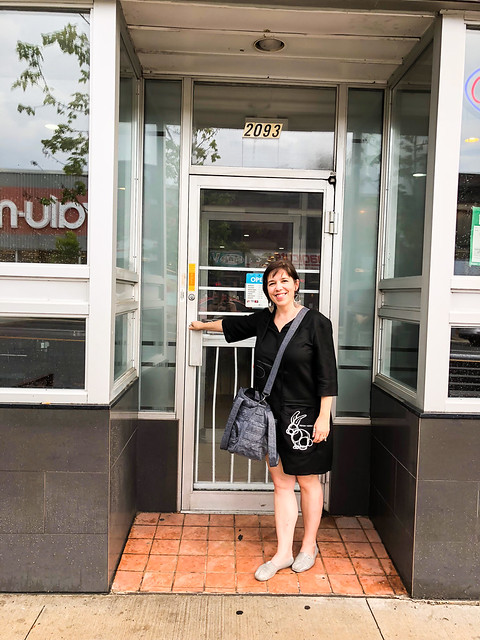 Jamie was a good sport and said yes to finally going back. As soon as we walked in the doors the owner said, “Hi! Haven’t seen you for ten years! How are you?” Needless to say, I treated Jamie to dinner. 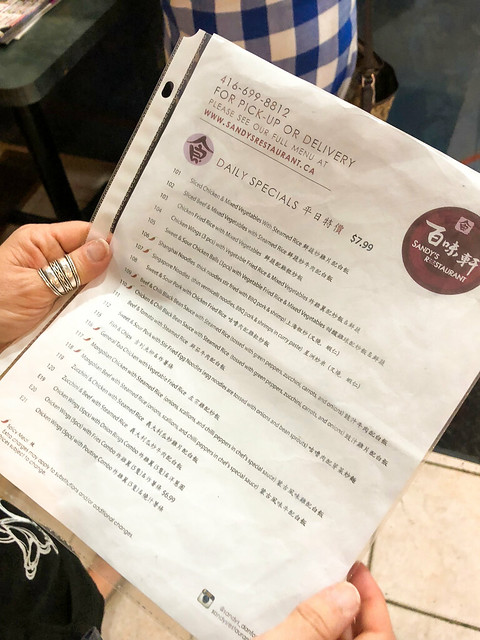 For us it is never a hard choice. Either Shanghai noodles or the sweet and sour pork. We both went for the pork. You can’t beat $8 for a meal! 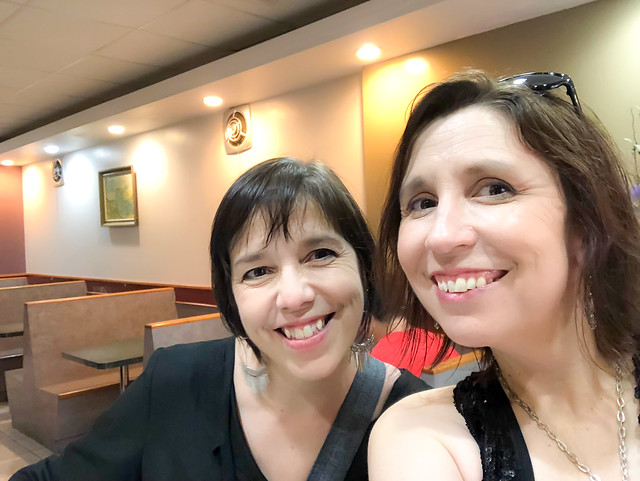 It is funny that by the time we got to Sandy’s we were in between storms and did not get rained on! We waited for our food and walked home. 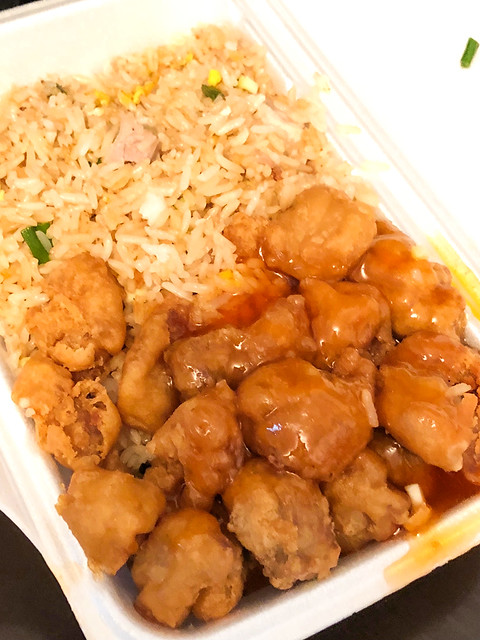 The food was great again! Although next time I will order extra sauce, as I want mine slathered. Jamie confirmed that they were back to their regular standards. I started laughing when I thought about the owner’s response to our return and said, “Dinner and a guilt trip, just like Mom used to make!” We laughed our asses off. Mom was the QUEEN of guilt trips.

I think Jamie was happy we did not risk getting hit by lightning or us getting sick from braving the elements to go the event. I was sad about it because I hate letting people down. That said, it did continue to pour and lightning and thunder crashed ALL night. We made the right choice. 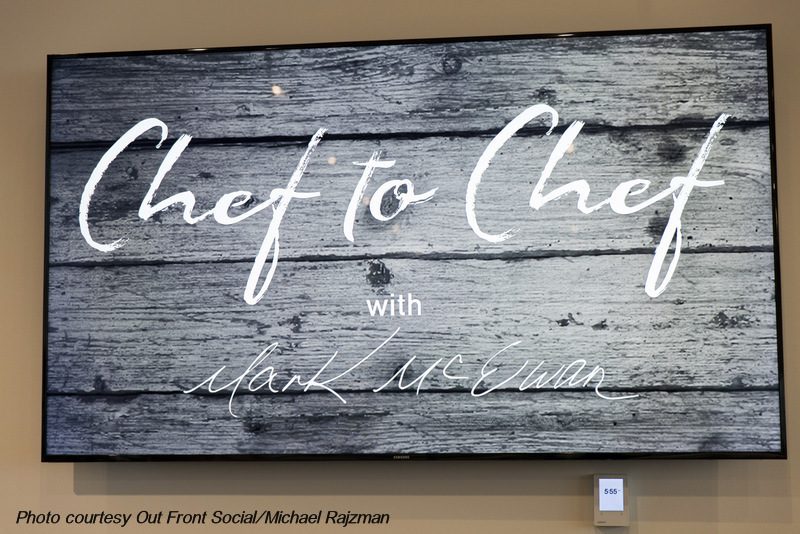 Thankfully, I could still watch the show but via my computer. I was immediately intrigued by the revolving video graphic of this octopus being stabbed by a knife when I went to the site to watch the first episode. 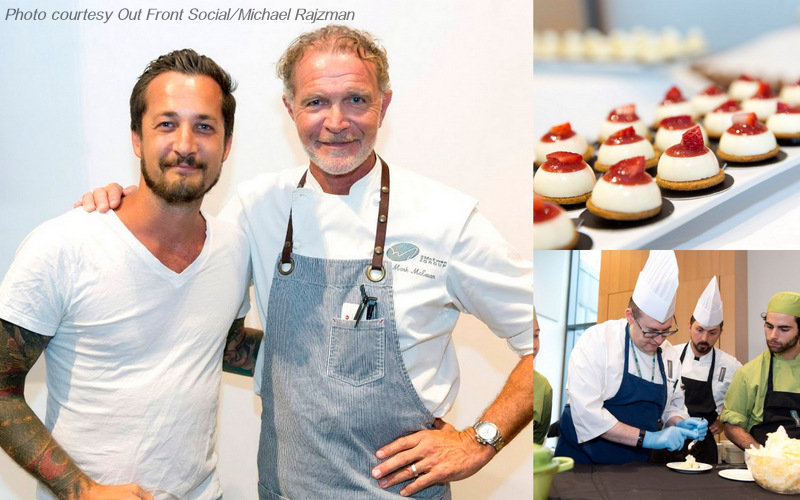 You can also watch Chef to Chef with Mark McEwan – Episode 1 Grant van Gameren directly from YouTube. This episode was filmed at Grant’s Toronto restaurant, Bar Isabel. Turns out Jamie had been there for an anniversary dinner before and really enjoyed it. Small foodie world. There was a lot of focus on seafood on the menu which she and her husband are not fans of so their server helped come up with a dining experience they would, and did, enjoy.

The show was absolutely fascinating and I enjoyed how they both connected deeply about being chefs on many levels. I loved hearing about Chef Grant van Gameren‘s non-foodie background growing up which inspired me deeply. I had zero interest in food until I was out of university so that gave me hope. I mean a former rapper and snake breeder turned self-taught chef? What could be cooler? 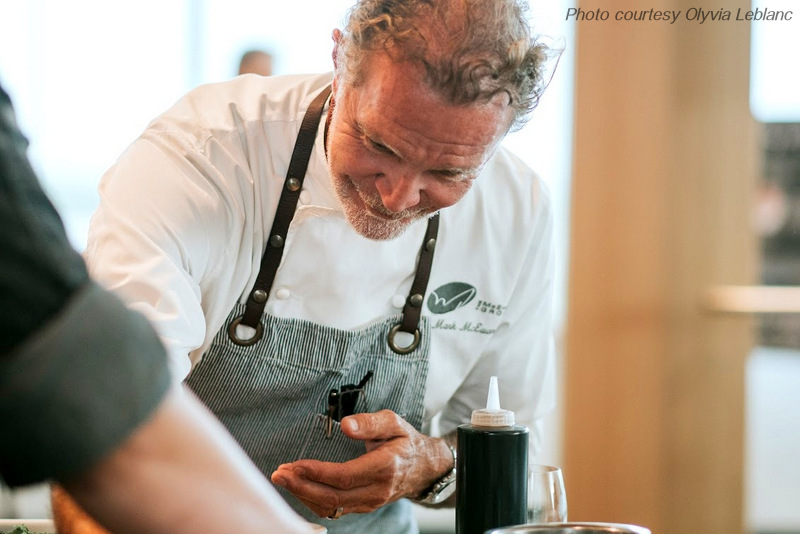 This show was great and I loved hearing Chef Mark McEwan‘s no bullshit perspective. My favourite moment was when he said he would throw a chef out of his restaurant if their goals in their chef life were to have a TV show and publish a cookbook. I laughed my ass off. So awesome. I really wish I could have been there for the opening but I am glad that I still got to see the show and will continue watching it.

My only complaint about the show is that some of the artistic shaky cam goes on for a little too long at times but then I have been sensitive to that ever since my attack of vertigo. Probably no one else but me would have noticed that.