You are here: Home / restaurant review / The TRUTH About Dunn’s Famous Express on Danforth 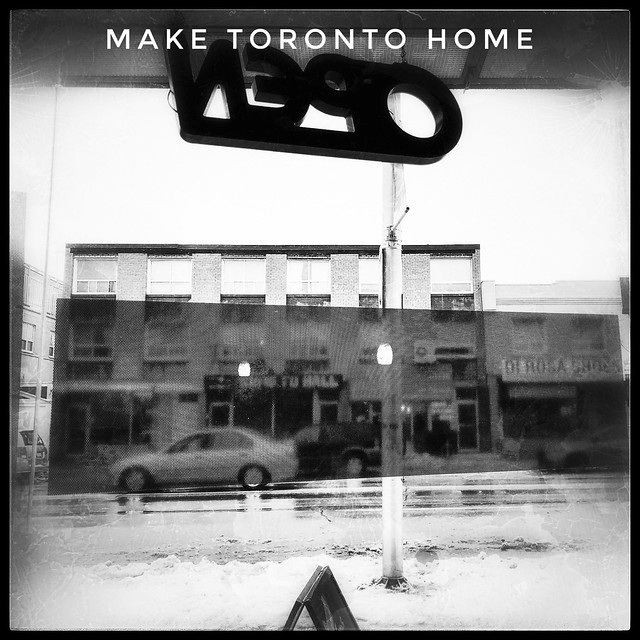 Since my birthday bash I have been in bed recovering! That’s how good a party it was. Even on my birthday I was in bed for most of the day resting so yesterday I had to get outside. It was slushy as an urban hell landscape can get but it was raining and above zero. I was going outside! 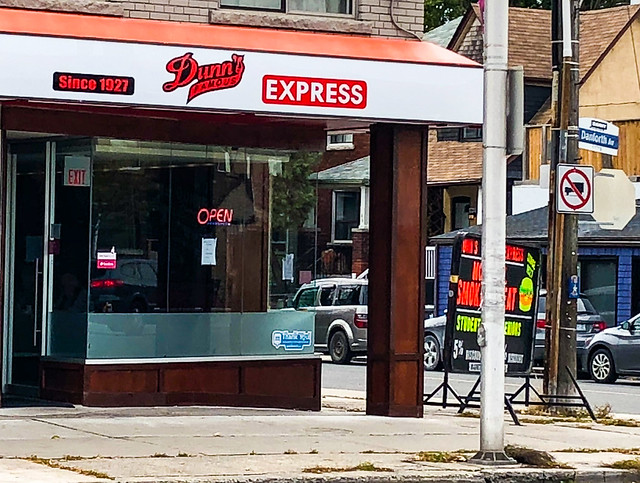 Last fall there was a ton of excitement when a Dunn’s Famous Express came to 1779 Danforth Avenue. Even faster than that was the controversy. Was it really a Dunn’s? 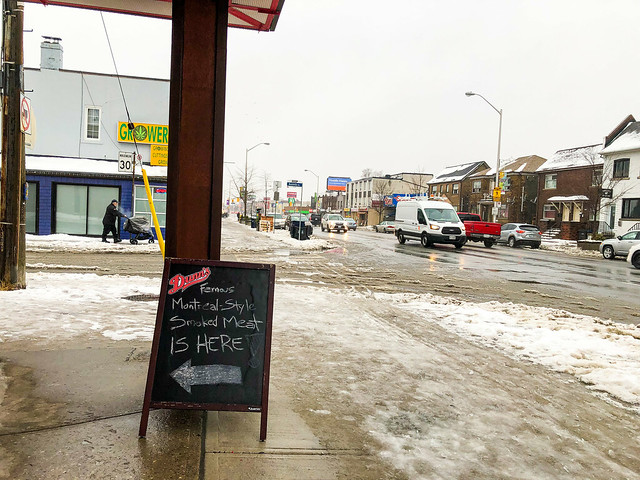 After a while I got drama fatigue watching people argue about it online and reading about rumours of family politics.

Screw it. I decided I would go for myself and check it out and focus solely on one thing: FOOD! 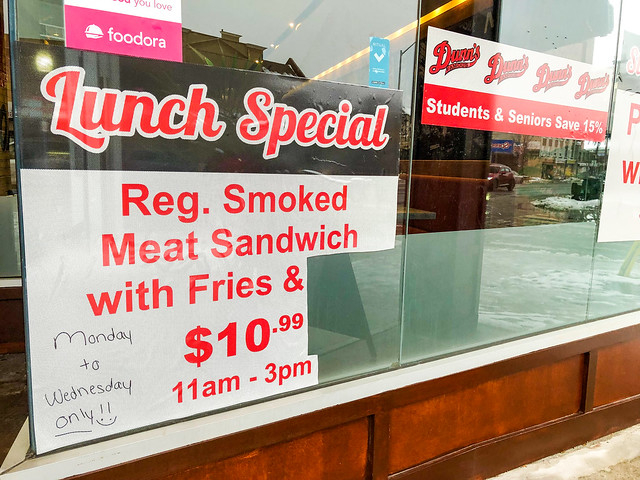 As a belated gift to myself I went out for lunch walking through deep puddles of ice, snow and rain. 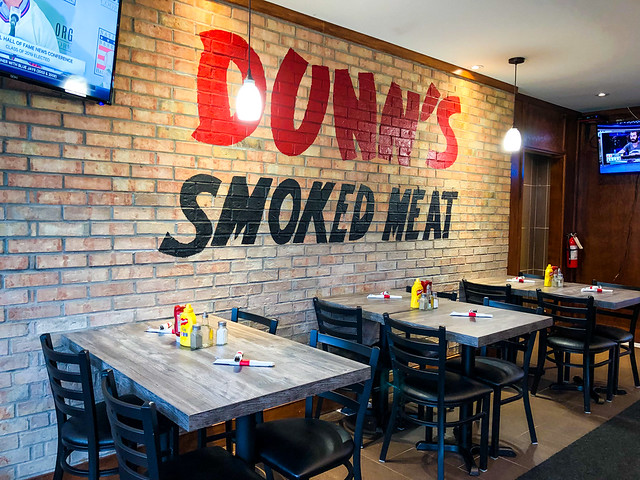 As soon as I walked in the door there was a wonderful warmth to the place. 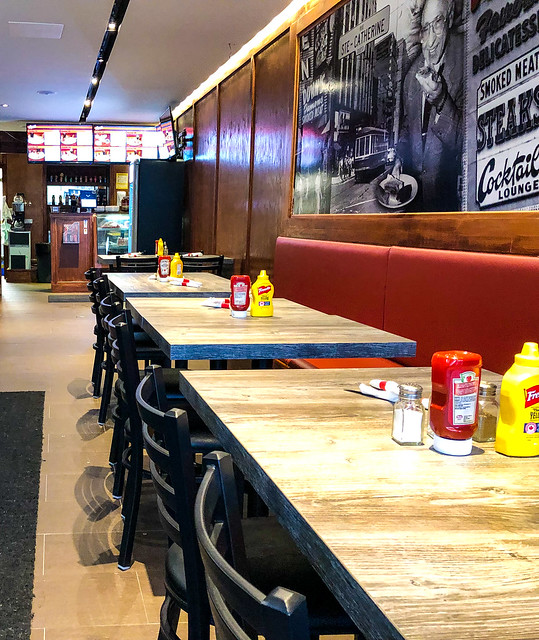 I walked to the back to order my lunch and was greeted by the nicest server ever! She helped walk me through the two most popular combos: the jumbo smoked meat and Reuben platters. 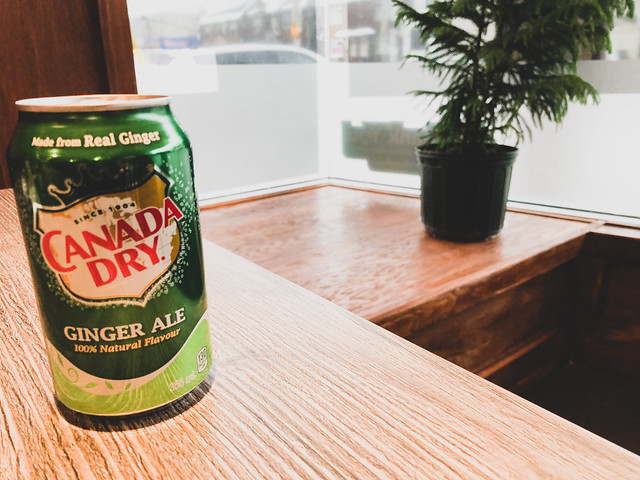 The Reuben sounded heavenly in particular, complete with melted Swiss cheese, but I was there to check out the controversial smoked meat sandwich. I ordered Combo #1 but upgraded my fries to onion rings.

I grabbed my pop and took a seat at the front of the restaurant so I could get the most out of the depressingly dark day’s natural light. 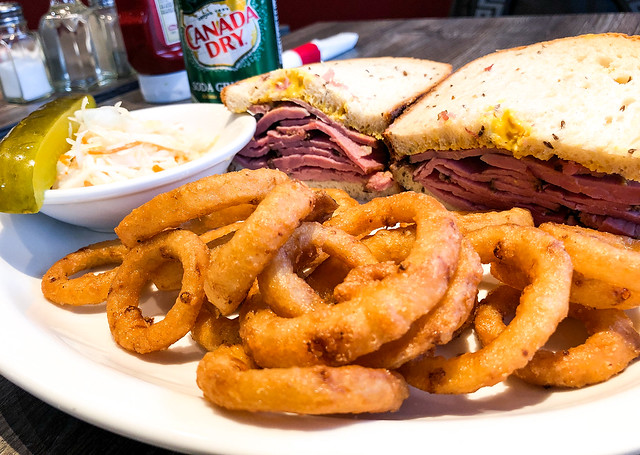 Wow!!! Yes, the online comments about the sandwich are correct, the meat is thicker cut than the sandwich I had in Vancouver by a lot but, is that a bad thing? 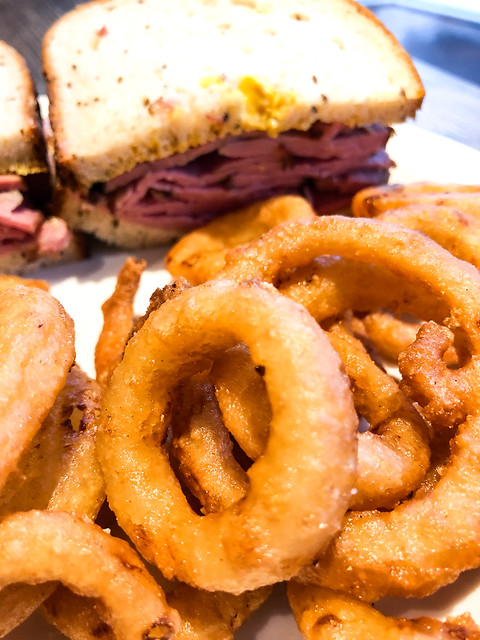 The onions were perfectly crispy and melt-in-your-mouth! I did have to add a little salt to them but seriously, they were delicious. 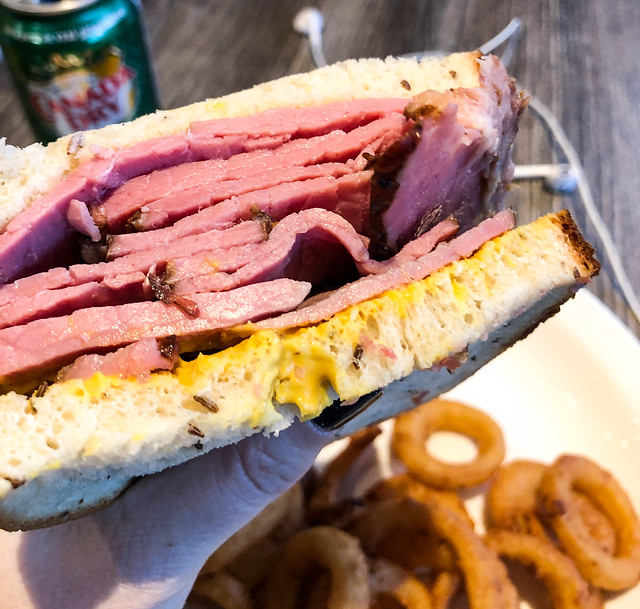 As soon as I picked up the sandwich I was enraptured by the warm soft bread. This is the achilles heel of most smoked meat sandwiches. People do not pay enough attention to the bread!

I could not wait to take a bite and it appears that my request for less fatty meat was honoured and generosity of mustard was delivered. 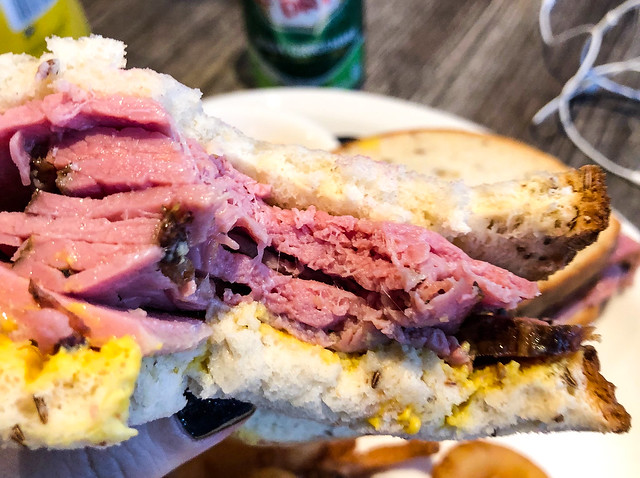 D-A-M-N!!! The bread was not only warm but flavourful and yes, the meat was thickly cut but not difficult to bite right through at all. Normally I have to add a ton of mustard to the side but this sandwich had the perfect amount. I added more mustard because hey, that is just me. There can never be too much mustard but there certainly was not a dearth of it at all.

I asked about the bread because I could not contain my excitement about it. I was told that it is heated along with the meat to not only make it warm but to also add flavouring to compliment the sandwich. I say? Home run of an idea! This was the best smoked meat sandwich of my life and I have even more than you can imagine. I grew up on them and never has the bread been so perfect and the mustard so generous without dripping everywhere. 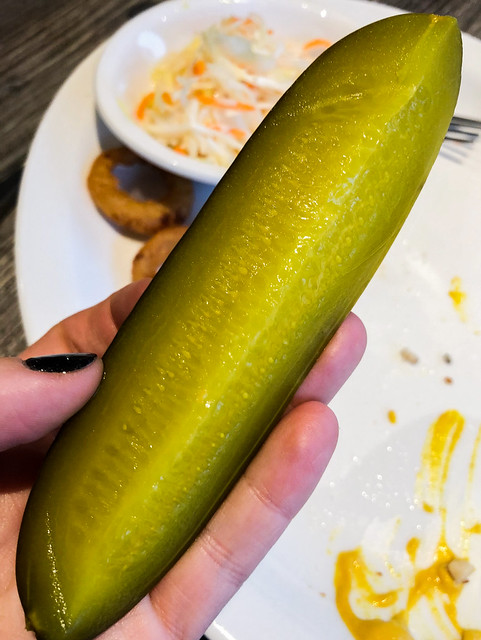 It does not stop there! The pickle is just as important to me as the sandwich. I saved it until last and am so glad I did.

This pickle was so sour I could only eat it in small bites. It continuously brought tears to my eyes and made me the happiest foodie on the planet during one of the crappiest January days in Toronto. There is nothing better than a sour pickle for me and this? This was magic. I was drinking water all night, totally dehydrated by its salt and vinegar magic. 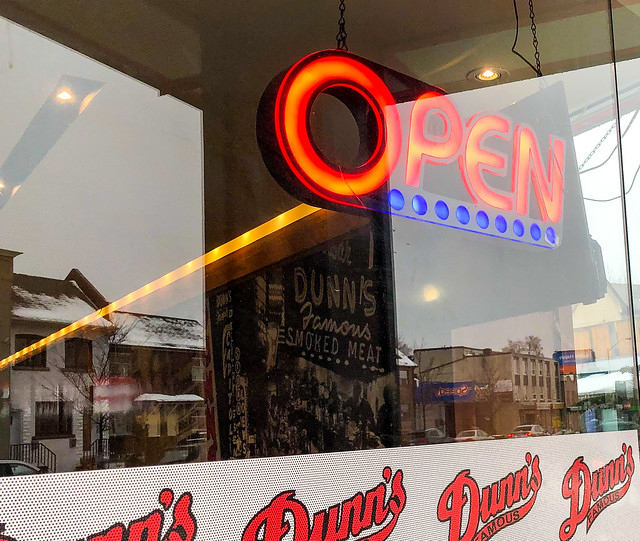 The only issue for me with Dunn’s Famous Express on Danforth is it is a tad cost prohibitive. Because I upgraded the fries my total was over $22 and for lunch, that is a lot of money. 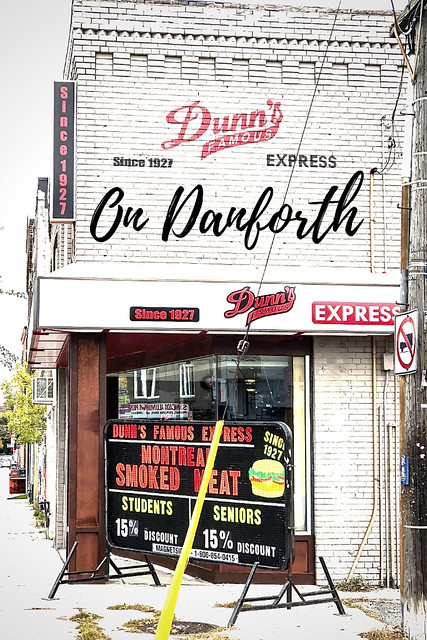 They do have deals for students and seniors which is great and next time I will try and make it in before 3 pm so I can get the $10.99 lunch special and get that Reuben sandwich I want so badly!

Regarding the drama? What I can disclose is Dunn’s Famous Express on Danforth is now under new management and it appears that they are doing everything right. The customer service was so friendly and helpful, the food was delicious and they do have deals for lower income people. I can not think of one thing wrong with this particular Dunn’s Famous Express other than the meat might be thicker cut than you are used to. I say, who cares? It is delicious!

I give Dunn’s Famous Express on Danforth five out of five wooden spoons and a big welcome-to-the-neighbourhood foodie hug! I WILL be back!