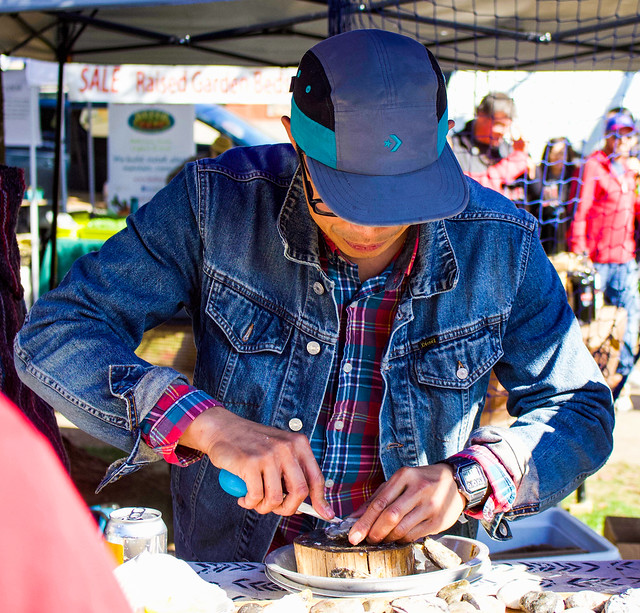 I will admit it. Until very recently I had never had a raw oyster. I have wanted to try this foodie rite of passage desperately since I went to The Nova Scotia Seafood Festival eight years ago. You really have to try something so nerve wracking with an oyster connoisseur which I did not have at the time. Since I moved back home my friend Dawn The Foodie Realtor has been talking about me losing my raw oyster virginity and it finally happened! 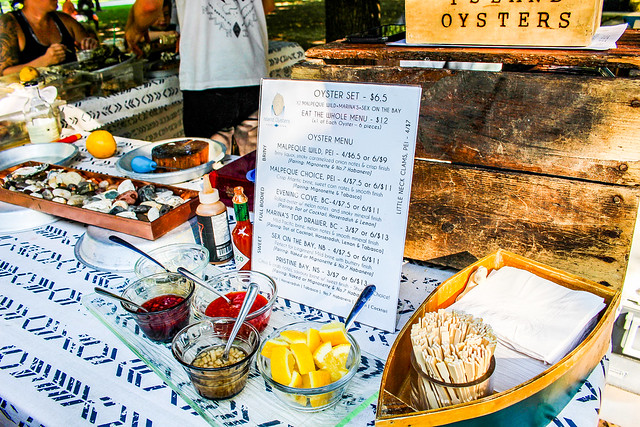 We were at a Trinity Bellwoods Farmers Market and discovered… Island Oysters! I had no excuses. I knew it was the perfect time and moment. OMG, I was going to eat a raw oyster! 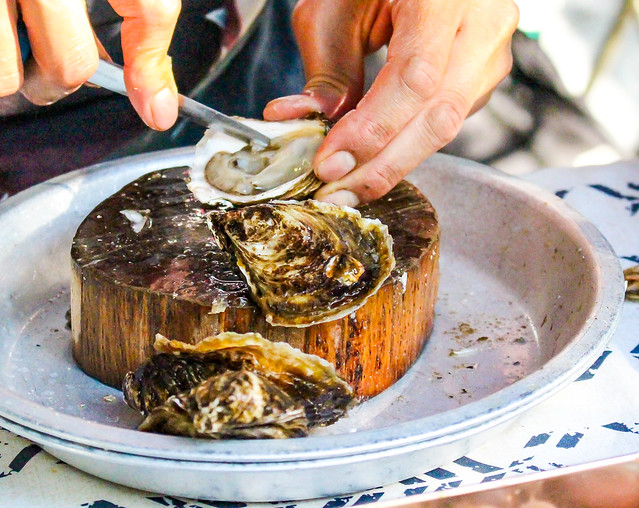 I thought it was a tad strange to see something like oysters amongst the freshly grown beets and home baked fresh-from-the-farm apple pies but then remembered. I am in Toronto. A city where anything is possible and you just got to go with it. 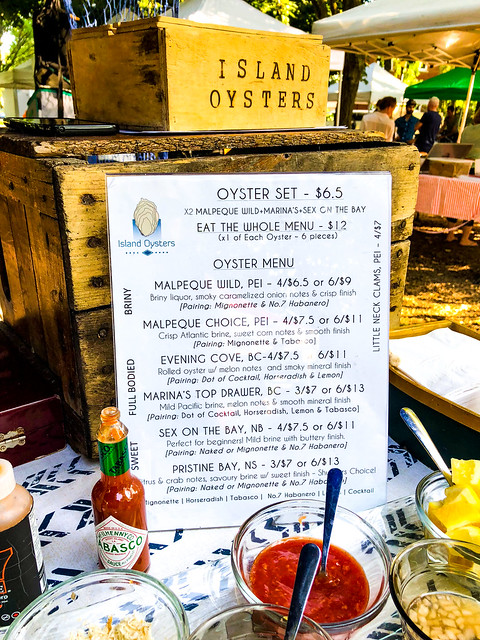 Island Oysters provides oyster catering and pop-up oyster bar stations for weddings, events, parties, festivals and markets: “We curate the finest and freshest Canadian Oysters.” They had oysters from both coasts to choose from. 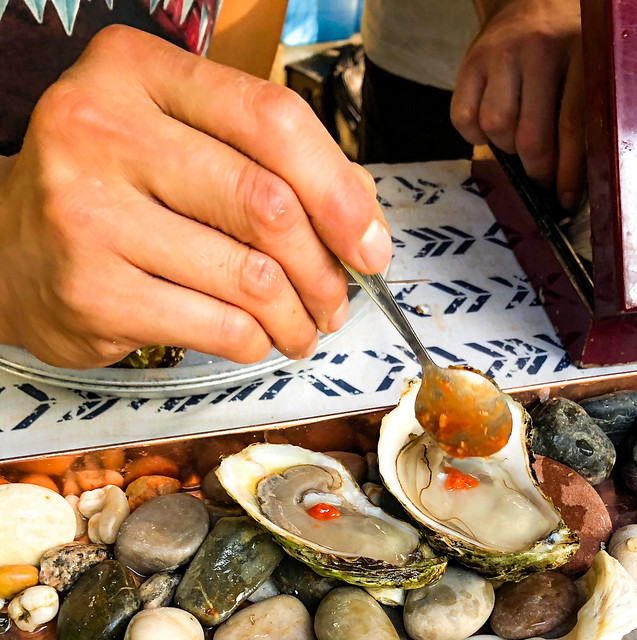 I did not know how to order the oysters or dress them so Dawn picked something from the menu and the oyster shucker/chef prepared some for us. 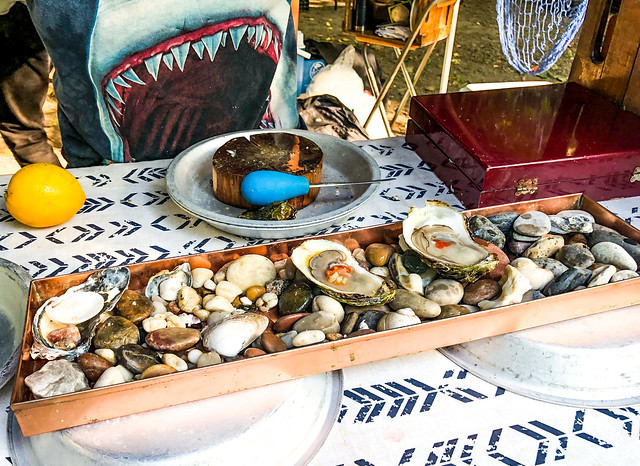 They were huge! I grabbed one and went for it. No hesitation. Went down the hatch and slurped it back which is harder that I was expecting. I had a long neck and not a big gullet. I will not say it was easy or that I was a natural in my way. It was weird but…

So many flavours!!! The part that freaked me out the most was how the cold ocean oyster fell with a smack into my volcanic beast of a belly. It is like I had swallowed a fleshy ice cube and it sat there for quite a long time before melting into that acidic abyss. It felt completely strange and alien and fascinating. I had never experienced anything quite like it. 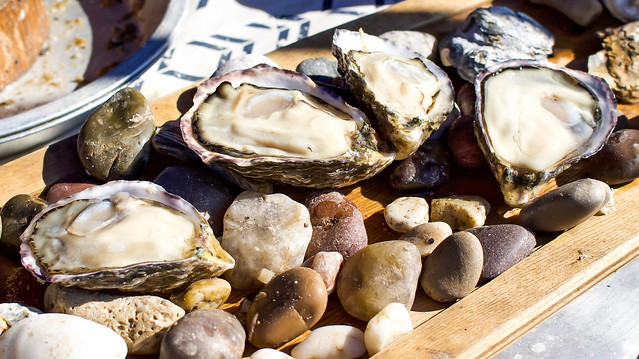 Dawn treated me to quite a few more and I tried all sorts of flavoured toppings but I eventually had one completely plain and that, was my favourite. It was pure. It felt like I ate the ocean. I was in love. Pure brine, I was back at the sea. 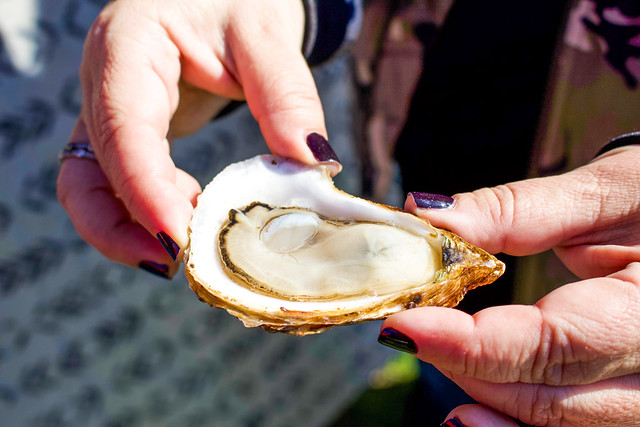 I did have one issue almost choking on one of the oysters. Instead of panicking I relaxed and breathed in with my nose which seemed to suck the oyster down into my belly like a seafood torpedo. I tried chewing the next one because I have heard “real oyster lovers” do not eat them whole but it just was not as fun. As scary as getting one stuck in my throat was, for me it is either a whole raw shot or cook them up.

This was a huge foodie step for me. It was like the first time I had sushi or salmon tartar. I love that food can be scary and intimidating. That there are so many things I have not had yet and there is a world of food for me to grab and eat. FYI this is now oyster season. I thought it was the summer but it is quite the opposite. Oyster season apparently happens during the months that contain the letter R so it started again in September.

Raw oysters are not for everyone. I asked about them on social media and there was no grey area. People either love or hate them and I am happy to say I know now I love them. A part that was holding me back for so long was I was scared that I wouldn’t. Now, I know. You have to be OK with the texture, the cold, the salt, the seafood-i-ness but if you are, there is nothing else like it on the planet.

I would like to thank my friend Dawn The Foodie Realtor for not only treating me but supporting me with this foodie challenging. I truly was afraid. She and Island Oysters made it so much fun we went for round two when they popped up at The Leslieville Farmers’ Market. It was amazing to watch them work and give us such a fantastic foodie experience.