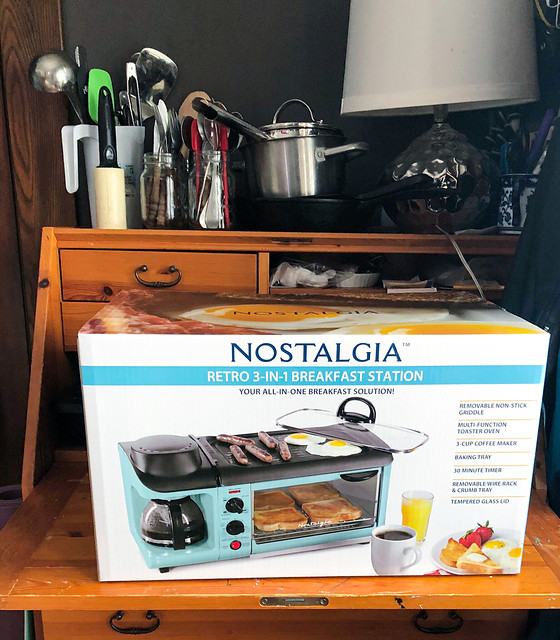 Last month it was my birthday and I received a very generous gift from someone special and as a I result I received a Nostalgia Retro 3-in-1 Family Size Electric Breakfast Station, Coffeemaker, Griddle, Toaster Oven. FYI there are many different versions of this type of product and I invested in the most expensive one because it had much better reviews. The other ones seemed to lack power and had technical issues and I wanted the Cadillac of what I call my adult Easy Bake Oven. 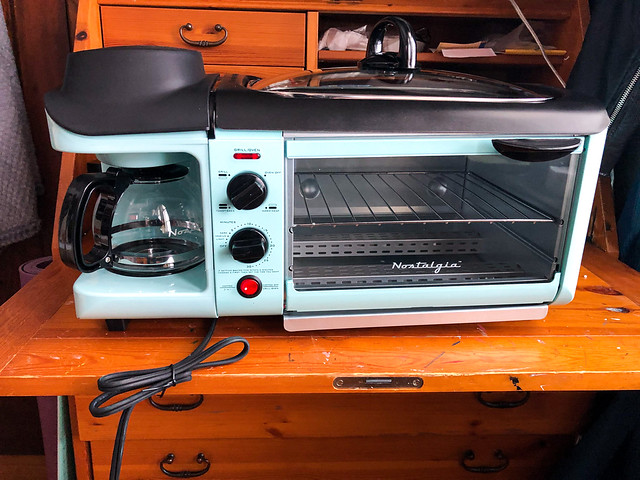 The Nostalgia Retro 3-in-1 comes with a coffee maker, a grill with glass lid and a toaster oven. It took me a while to find the tray at the bottom of the box which next to impossible to open and remove the unit without tearing the product box apart. 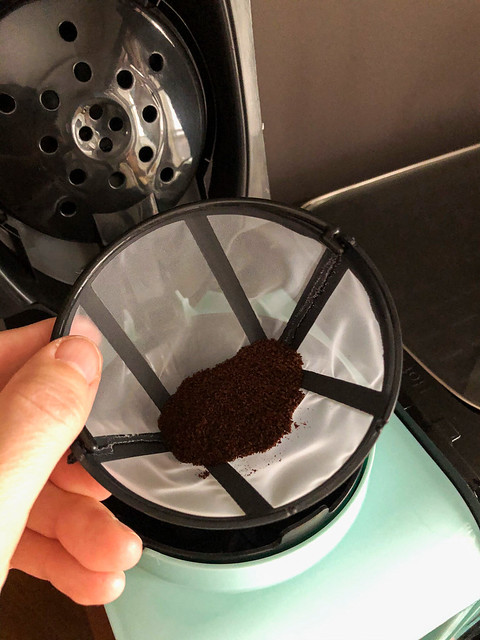 I will admit that I was a bit confused from the beginning about the coffee maker. Oh how many coffee makers I have killed over the years! From the instructions it sounded as though this was the actual coffee filter and that a paper one was not necessary. When I asked on Amazon there were people who do also use a paper filter as well but after looking over the instructions for the millionth time, I decided the company was saying that this was the only filter you needed. 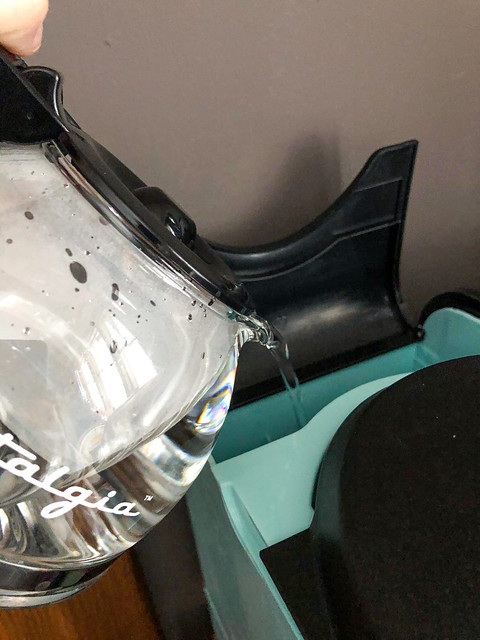 I added the water to the basin and must admit, it was quite high off the ground because I fit the unit on top of my desk. 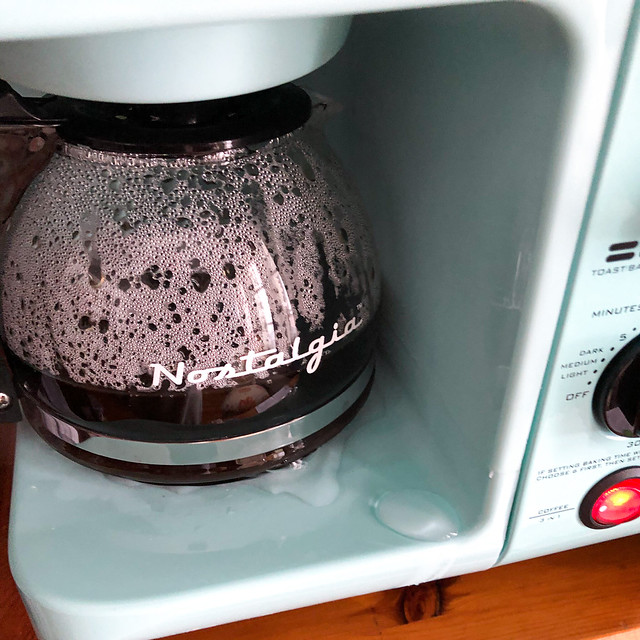 Ummm… We have a problem! Water started leaking out from the top! Ah crap… Seriously? Turns out… 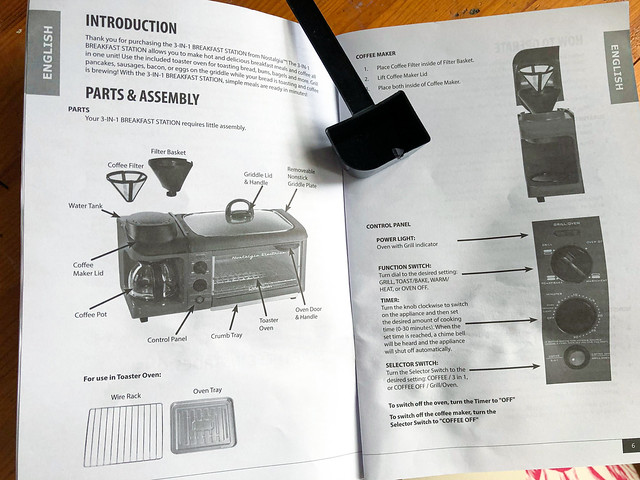 The company had put in a plastic teaspoon for the coffee in the water basin! I had no idea it was there because it was so high off the ground and… I did an inventory check with the manual after cleaning all the components. Nothing about a teaspoon was listed! 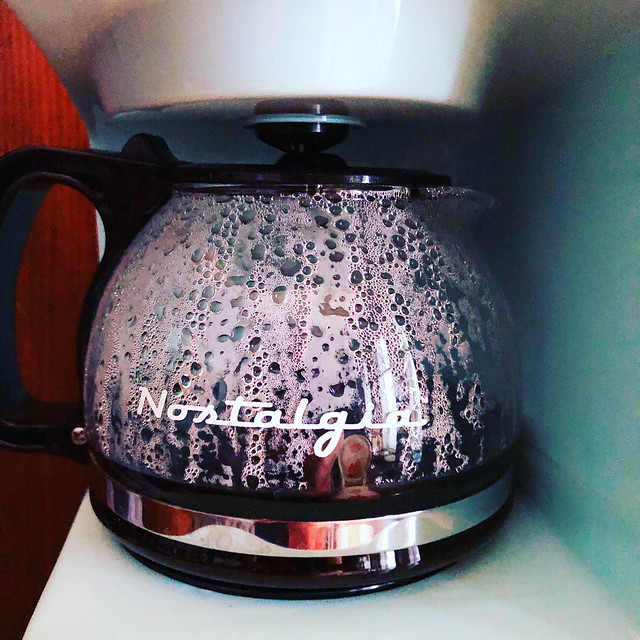 Once I removed it the coffee maker worked fine! 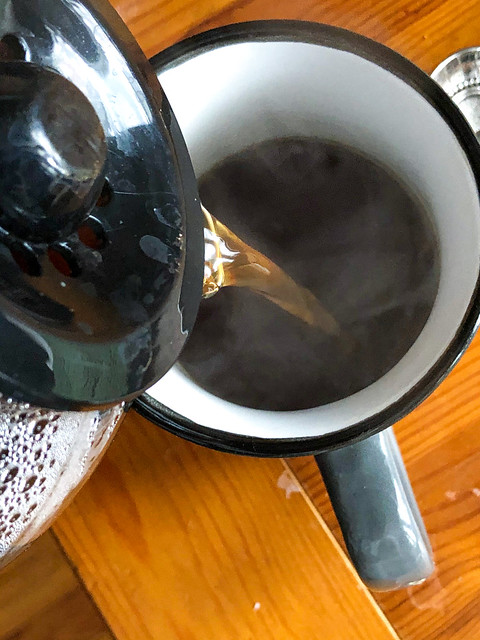 A lot of people complained that the coffee carafe spilled every time they poured a cup of coffee. Never happened to me at all! 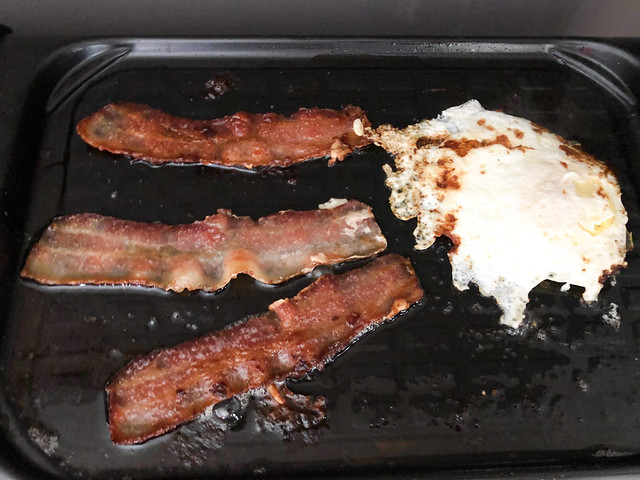 Another big complaint was the lack of power of the grill and the fact everything stuck to it. I suspected this was due to people who were impatient for the grill to get hot. So I waited, added some butter and was able to cook an egg and bacon on the grill no problem. 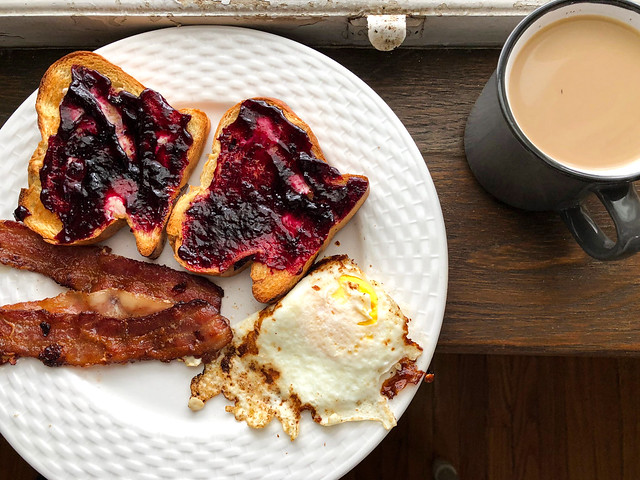 As well as make toast and coffee. Now the bacon was not as crispy as I like it to be but that was just an issue of timing. It was either less crispy bacon or a way overdone egg. 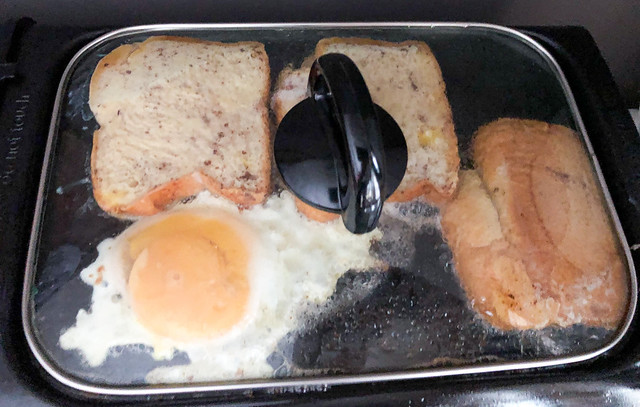 One of the other reasons why I chose this model is I could get a glass lid to protect my space while my food cooked. In this case French toast and an egg after the bacon was cooked. 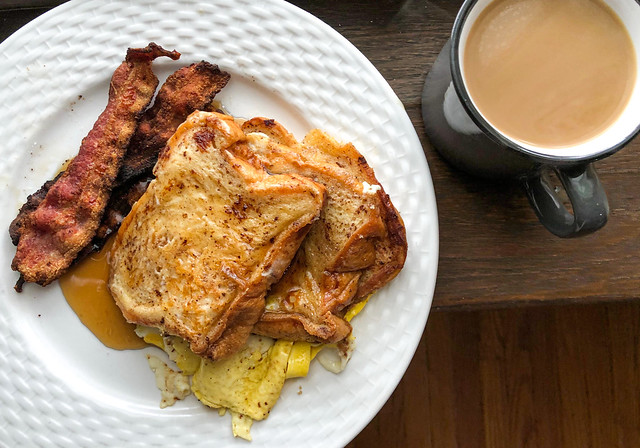 Again, I had no issues with food sticking and everything cooked really well. 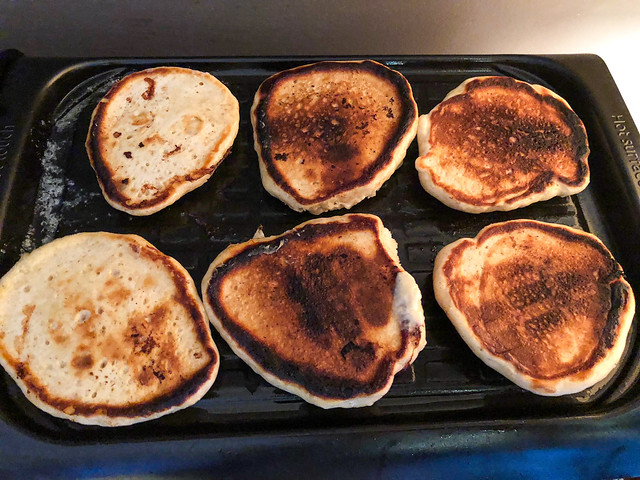 A very revealing test was making yeast pancakes! Clearly the centre and the the right side of the grill is hotter than the left, LOL. 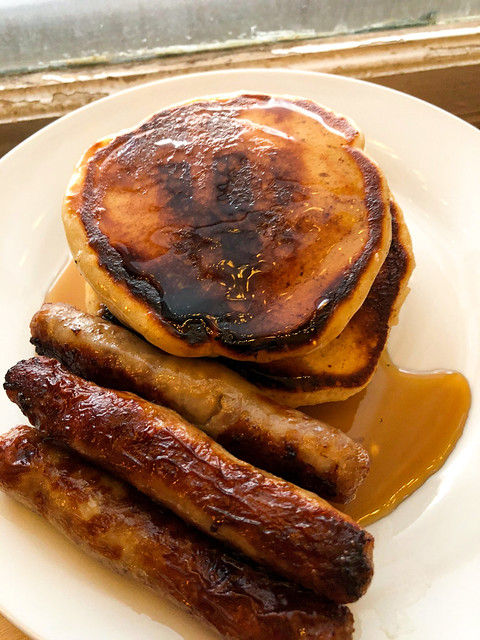 And yes, everything got very hot. There is no way to control how hot the grill gets. 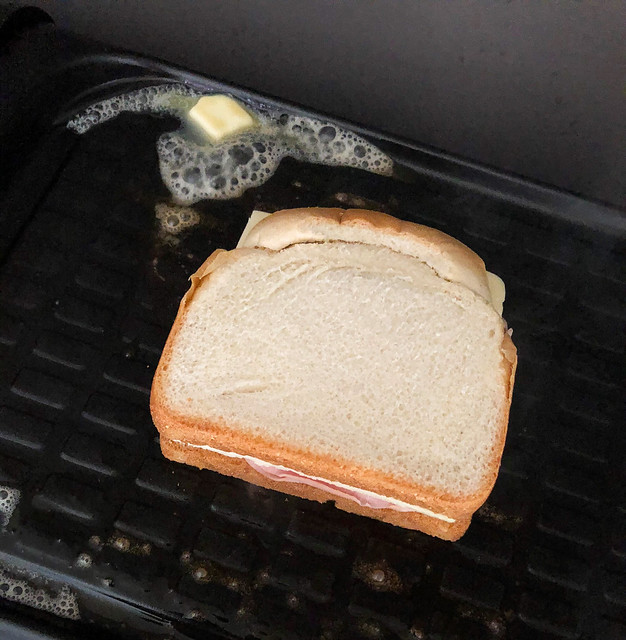 It is either warming up, on or off. As a result, if anything I found that it could get too warm! 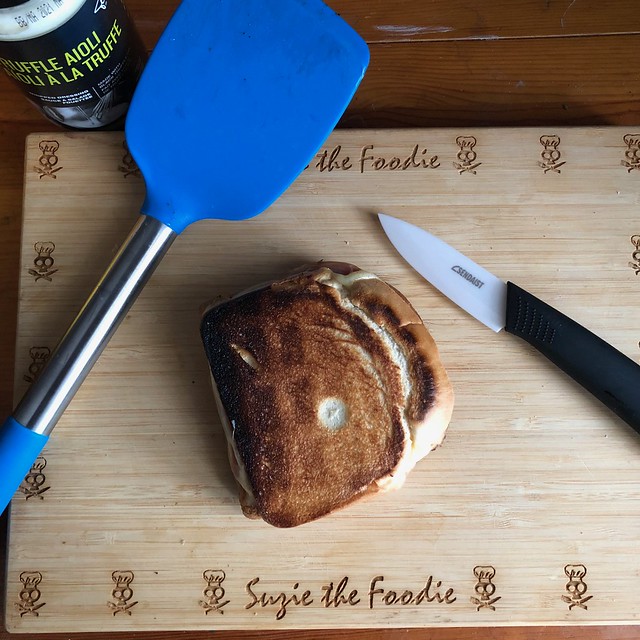 The grill proved to be an excellent resource for me in so many ways. I could truly enjoy brunch, lunch and probably even dinner if I had tried all from my bedroom! 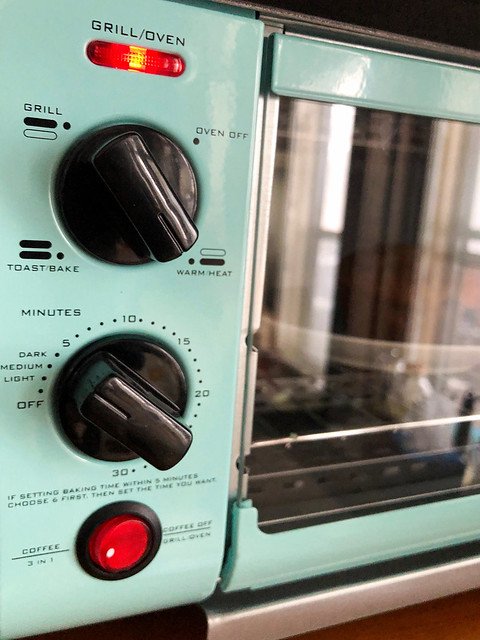 I must admit that sometimes I really feel as though my grasp of understanding the controls is a bit lacking. I have had the controls to not have the oven on and yet the oven sometimes glows. That could be because it is heating up the grill but it scorched the bacon I was keeping warm inside. 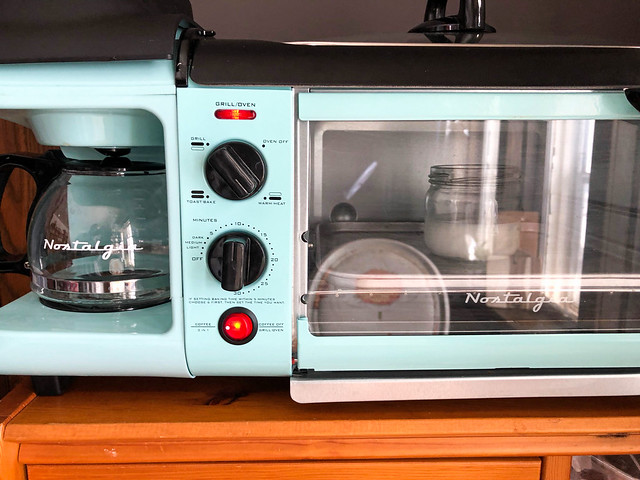 Not only have I made toast in the toaster oven I have used it almost every day to heat up some kind of food. Here I am heating up some milk with hazelnut creamer to help do some more product testing:

@suziethefoodieProduct testing Dallfoll Milk Frother! Make sure to heat milk and put frother on high to get that thick foam for coffee. ##producttesting ##milkfrother♬ Coffee – beabadoobee 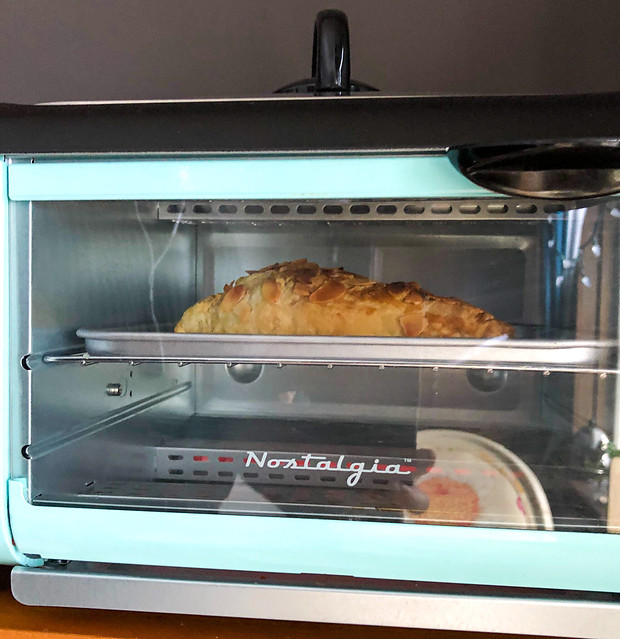 I made blueberry filled almond crusted turnovers and they heated up beautifully. I bought a pizza to feed me for a whole weekend and used the toaster oven to heat up the slices every time. I much prefer doing that to using a microwave! Again, you have no control over the temperature but you do have control over the time. 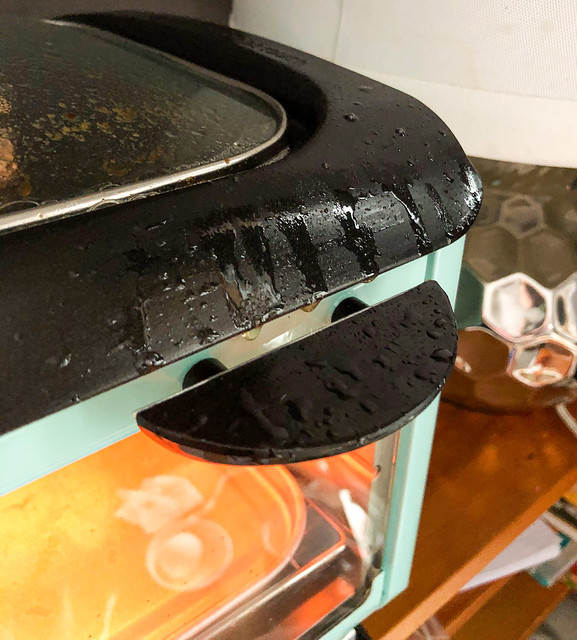 As amazing as it has been to make brunch and cook REAL food in my bedroom, I have decided to reserve it now as a bedroom bistro. It is messy even when using the awesome glass lid which made a huge difference but since I know have my kitchenette available to me again I am going to make bacon, eggs, pancakes… downstairs. All of a sudden not being able to breathe because my bedroom filled up with smoke made me realize, Suzie, safety first! 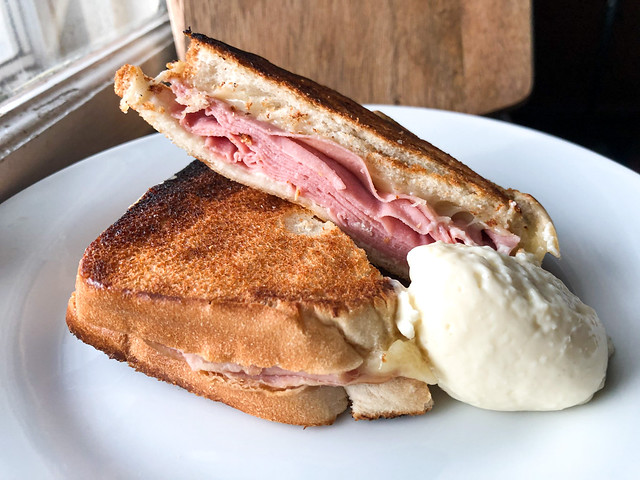 I absolutely LOVE my Nostalgia Retro 3-in-1 Family Size Electric Breakfast Station, Coffeemaker, Griddle, Toaster Oven. I look at it all the time and it makes me smile. It is capable of so much and brings me such freedom. Other than there being a slight droop to the removable metal breadcrumb tray and the stupid decision for them to put a plastic measuring spoon in the basin of the coffee maker, I find very little wrong with it at all and if anything it has brought me much freedom and joy.

I paid $150 for this unit and it got me through a tremendously difficult time. You do need to have some knowledge of how to work with a hot grill, get a grasp of the controls and be very careful not to scorch food. I give this product four and a half out of wooden spoons and blame the measuring spoon for it not getting a perfect score. What were they thinking?

If you are having to self-isolate or work in a small space, the Nostalgia Retro 3-in-1 will make a hugely positive difference to your life. I am so grateful to have one. It has made the young inner foodie who always wanted her own brand new Easy Bake Oven in me completely gleeful.