You are here: Home / bread / Back to Basics: Homemade Bread by Hand! 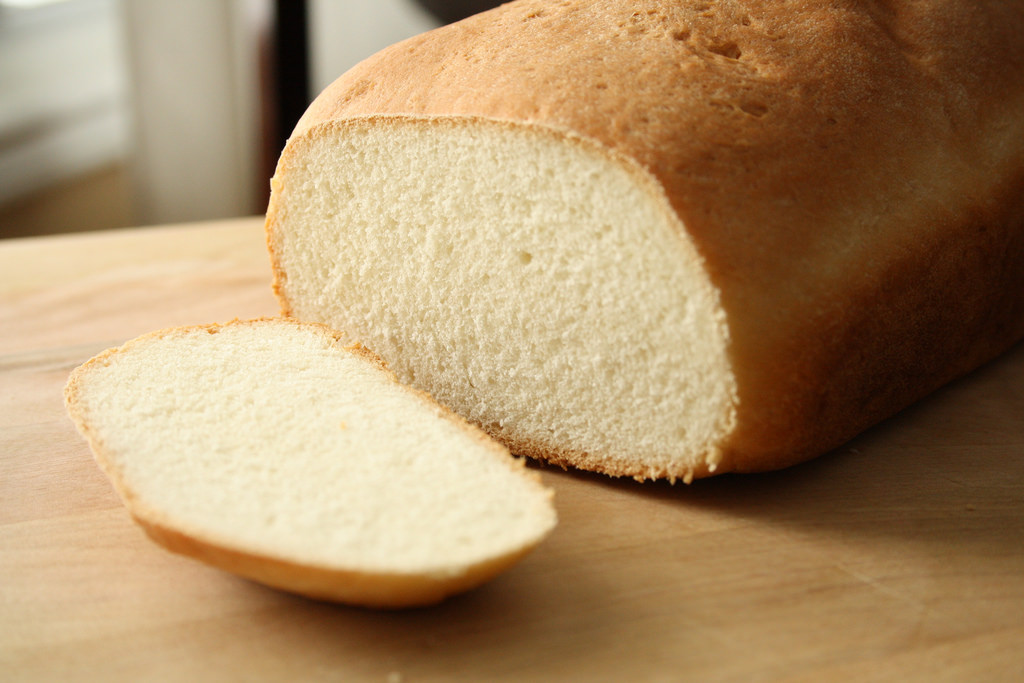 This was a huge challenge for me to do. Number one: I have sensitive hands because of my fibromyalgia and they get hurt very easily. Number two: I have been so down and depressed lately that I can barely get off my couch let alone bake or cook. Number three: I usually avoid baking when sad and depressed. The results? Yup, I totally screwed up the recipe quite a few times and yet, this bread rocks!

My friend Kelly told me about The All New Purity Cook Book which is a Canadian classic and apparently it has been re-printed and I got it for Christmas from my sister Jamie and my Dad, LOL. Nice choice! I totally love it, especially since they use all their old photographs to demonstrate how to make their recipes, that is right up my alley. I started with recipe #1: White Bread. Now I did not want to make four loaves so I cut the recipe in half and on a good day that would be no big deal but, well, I kind of screwed up. I am getting ahead of myself though! Scald one cup of milk on the stove. Apparently what that means is to heat milk just before its boiling point so there are little bubbles around the edges and steam is rising. In a large bowl put in 2 tbsp of sugar, 2 tsp of salt, 2 tbsp of butter and 1/2 cup of water. Add the hot milk and stir until the butter has melted. The recipe calls for shortening but I choose butter instead.

In a small cup dissolve 1 tsp of sugar in 1/2 cup of lukewarm water, which means it is just a little warmer than body temperature. Then add 1 package of yeast which is about 2 tsp. Let stand for 10 minutes. You want your yeast to be bubbly and frothy after it sits. If it is not like that, then do the yeast procedure all over again! If you do not you are going to waste lots of time and ingredients for nothing. The yeast must be active at this point. Stir it in to the other wet ingredients. Ummm…yeah, this is where I screwed up. I misread the directions and dumped in the entire five cups at once instead of adding the rest of the flour gradually! OK, I thought it was over at this point but I did not give up. I managed to stir and bring the dough together, albeit a rough, dry and tough. Oh my god, my poor hands. Kneading that dough was brutal! And entirely my fault. I did it though. I turned on CBC, put the timer on for eight minutes and I kneaded my heart out. At this point it was late afternoon and I was supposed to let the ball of dough rise for 1 1/2 hours. No problem, I put the dough in a greased bowl and into the microwave with a warm cup of water so it would have a nice snug and warm place to rise.

I decided to take a nap. I was exhausted and hurting. Next thing I knew it was close to dinner time and my hands were throbbing! I got back in the kitchen, cut the dough in half and let it rise for 15 minutes. No problem. Then I saw that you were supposed to put the dough in greased pans, grease the tops and let rise for 1 1/4 hours! OK, I think to myself. I can not do that and have time to bake these to go with dinner. Instead I followed a suggestion my dear online friend Tori recommended to me: nuke the dough for six seconds to cut the rising time in half. It seemed to help because they did rise a little after I nuked the dough and put it in bread tins and left them alone for half an hour: OK, not super risen, I realized at this point, but better than before. Time was running out, it was getting late and we were starving. I put them in the preheated 425F oven and baked for 30 minutes: I actually took them out a little earlier than recommended because I could smell the dough and they were smaller in size than they should have been thus taking less time to bake.
It is so funny that I can screw up recipes so badly and the food is still amazing. My husband grew up in a house of bakers and is very finicky about bread and he could not stop eating mine. He loved it so much. Yes, it was denser than it should have been but it did not matter, it tasted like real bread to him. I must admit, normally I forego eating the crust of bread but not this time, it tasted nutty and delicious! We even had this bread as French toast and it was divine.
The moral of this long and kind of crazy bread-making story? Do not give up. Yes, we all screw up in the kitchen but do not get discouraged and keep trying. I could have easily just dumped that hard dough in the compost but I did not do that, I kept it, worked with it, screwed it up a little more by not giving it enough time to rise and it was still delicious.