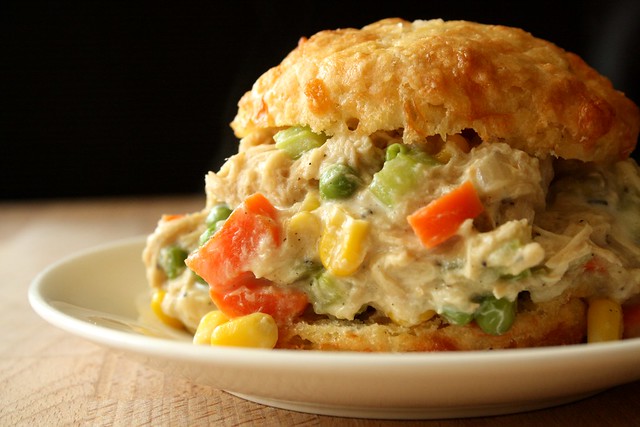 Thankfully this cautionary tale has a happy foodie ending but if I had not kept a cool head, well, it would have been a very different story. We begin with Lynn Crawford’s Cheddar Cheese Biscuits. That part of the story is all sunshine and daisies. A beautiful recipe. Here is where it all comes crashing down. Whenever I bring out the crockpot, I am filled with dread. I do not know how many horrible meals I have made with a crockpot, too many to count. Still, I try. Inspired by this recipe for chicken and biscuits, I put in some frozen veggies, chopped up potatoes, celery and onions and threw in some thyme. Sprinkled the top with cornstarch (where do you find quick-cooking tapioca?) and added two chicken breasts and added 1 cup of chicken broth.

As the slow cooker cooked away, my foodie senses were on alert and would not shut up. I tried to have a little nap before dinner but crockpot-anxiety brewed up inside me. I could not take it anymore! Instead of sleeping I came up with a backup plan. If it was a disaster, I would just make a chicken pot pie filling on the stovetop. I could do that. Everything would be fine.

I went upstairs and sure enough, the top of the chicken was pretty dried out. Damn. And underneath? Absolute mush! Completely inedible. Damn it! Crap! This always happens!!!!

Breathe Suzie… breathe… You have a plan right?

Right. Yes, that’s right. I do have a plan! I am in control. Everything will be delicious. Let’s get to work. I shredded the chicken with two forks and chopped up some carrots, celery, shallots and garlic. I nuked some frozen green peas and corn for just a minute to take the chill off. I started by sauteing the garlic and shallots over medium high heat for just a minute and then added the rest of the veggies. I had strained the crockpot mess to get the little bit of liquid left and added that to the pan. I also sprinkled just a little poultry seasoning for additional flavour, a few shakes of Worchestershire sauce, salt, pepper (then my peppermill broke, ack!) and more broth. I made a slurry with 1 tbsp of cornstarch in a little bit of cold broth and added it to the pan to thicken. I wanted it creamy so I added 2 tbsp of heavy cream, took the pan off the heat and added 2 tbsp of sour cream. I tasted the filling and it needed just a little more salt and then it was perfect. 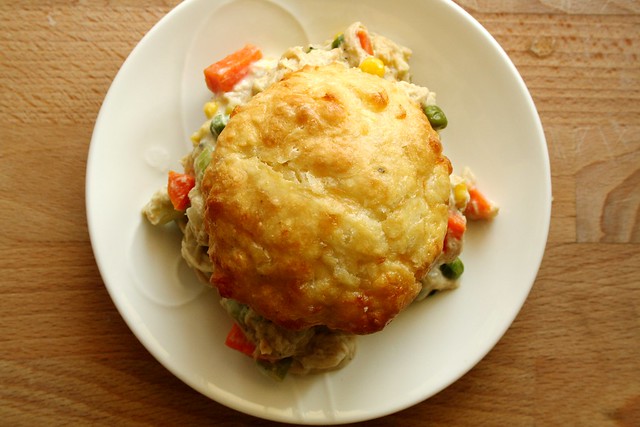 This was a huge hit with my husband! He could not believe that this was the result of a kitchen disaster. The filling was creamy, the veggies were fresh (and not boiled beyond recognition), the chicken tender and the sharp contrast with the cheddar flavour from the biscuits knocked it out of the park.

I think my slow cooker’s days are numbered. I use it for making apple cider and stews but other than that? I just don’t get it. It cooks everything to death.