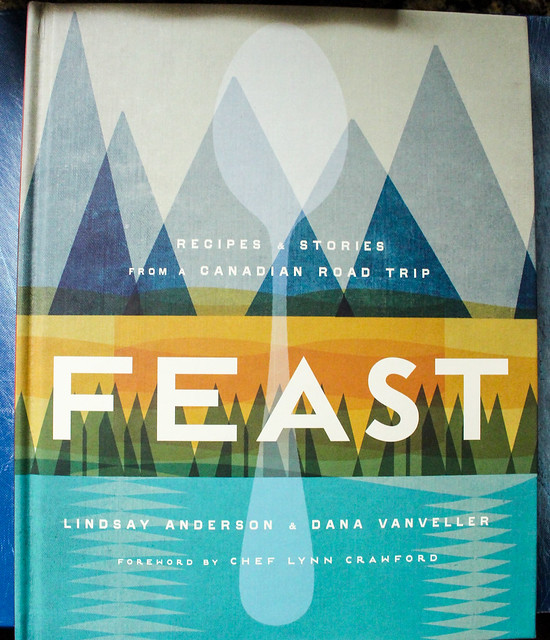 I do not think I could have been more excited about a cookbook than when I heard about Lindsay Anderson and Dana Vanveler‘s Feast: Recipes and Stories from a Canadian Road Trip. I heard them interviewed on CBC about their travels across Canada and their foodie adventures which they turned into a cookbook. I HAD to have it! I wanted to learn everything about their travels, hangout with them during this adventure and check out the food they tried along the way.

I kind of hounded them down on social media and they worked hard to make sure I received a copy in the mail. Which now, I feel terrible about. 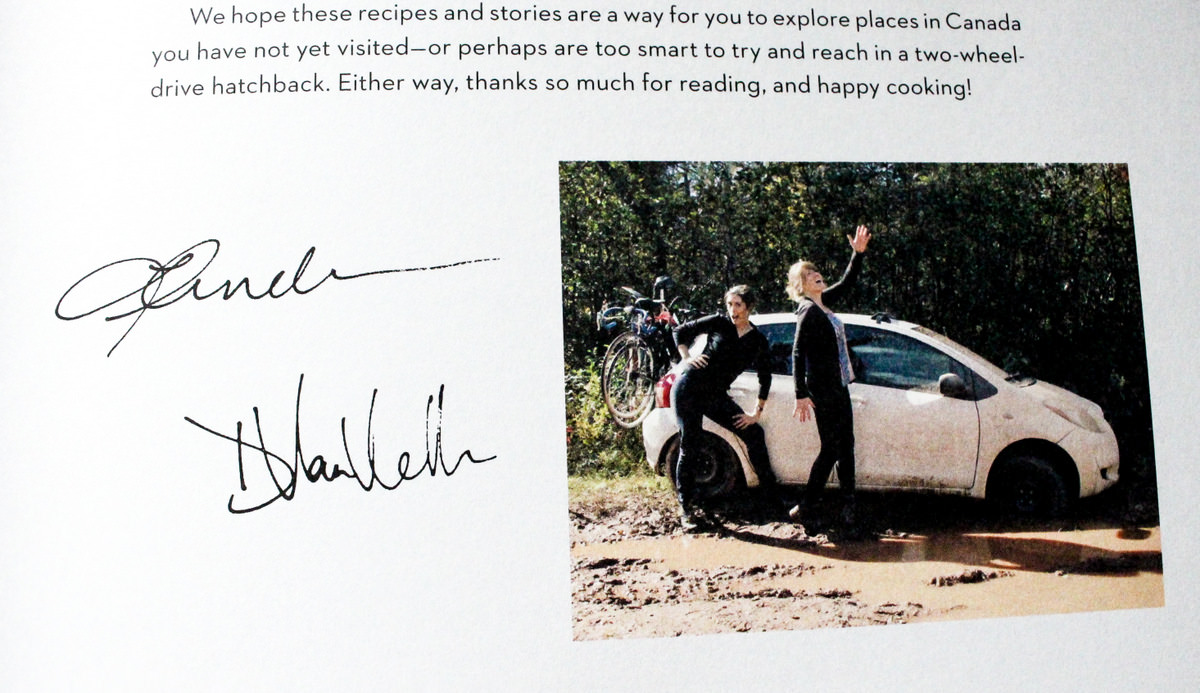 That was kind of a huge mistake on my part. I thought it was going to be a food and travel autobiography with lots of recipes. I was totally wrong. Despite the awesome Introduction that does describe a lot about their journey across Canada and the people they met, the rest of the book is basically just a cookbook. OK, I can handle that. Bummer though. They should write THAT book too! 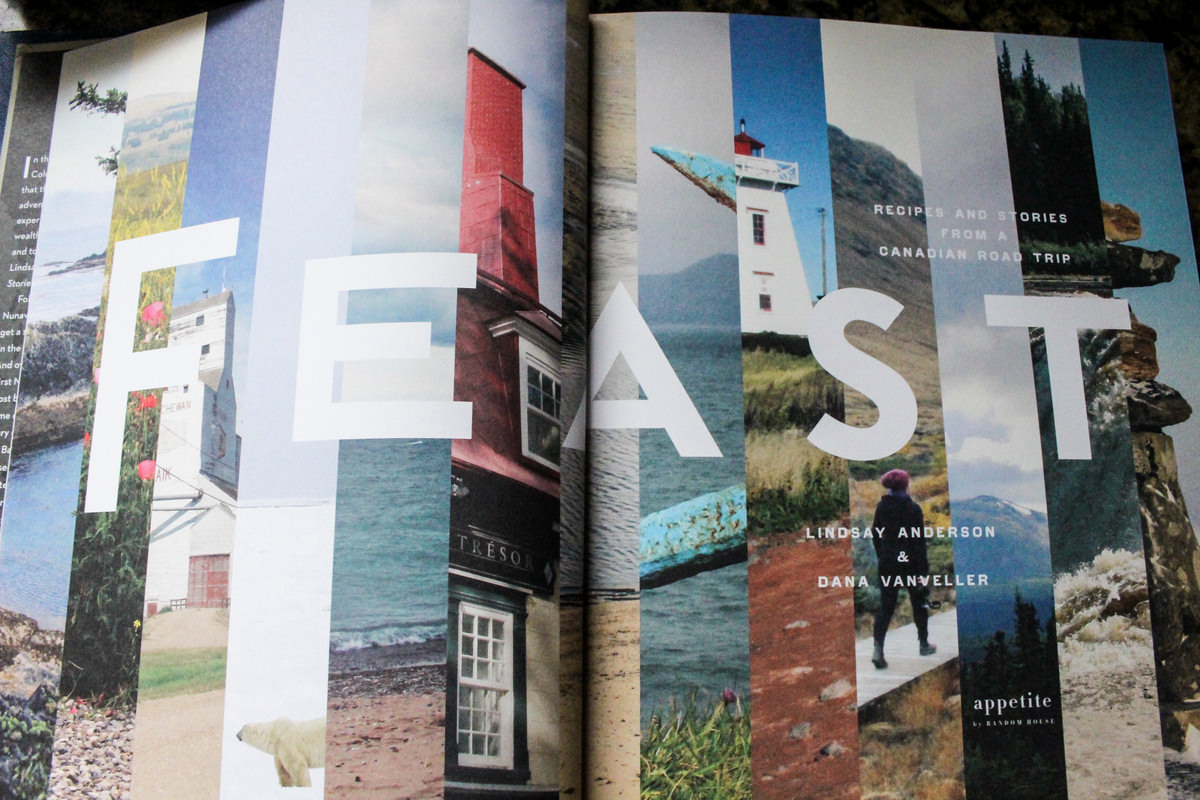 I do not understand what thinking went into how this book was organized. Again, I thought we were going to start off west and then move east or maybe north but no… 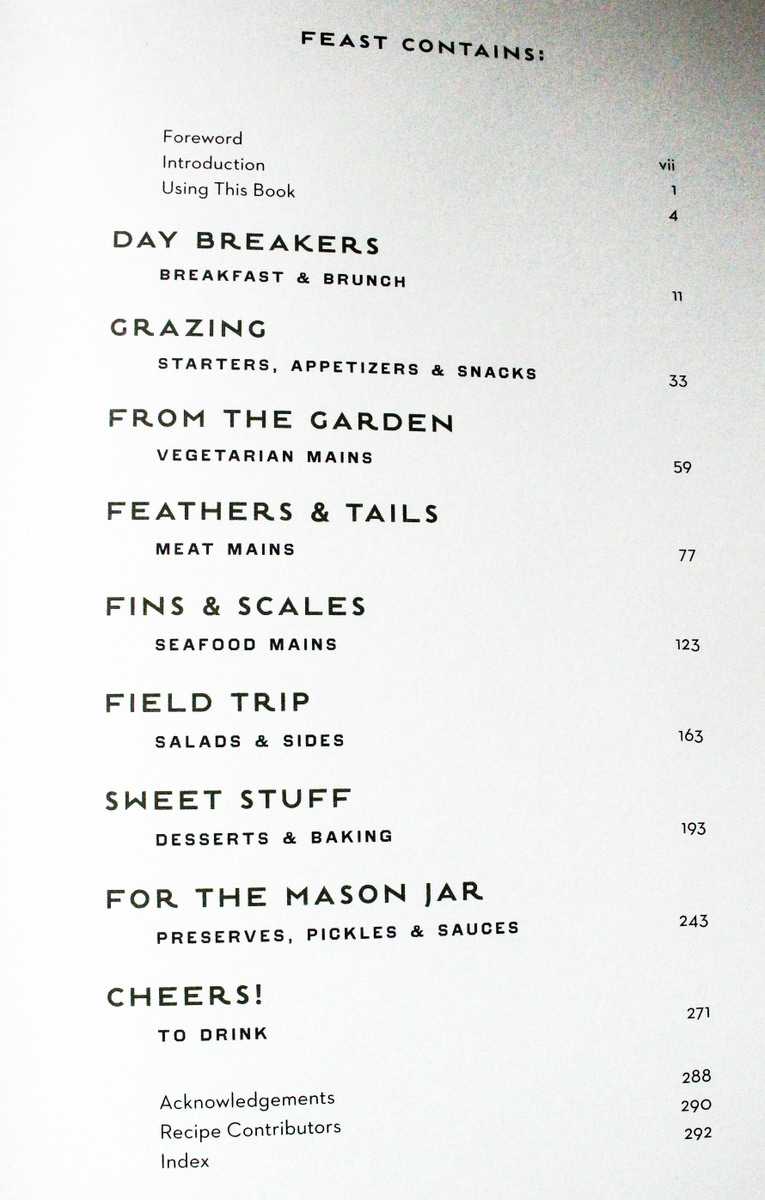 The book was designed similarly to a menu with starters, vegetarian dishes, meats, dessert… But! 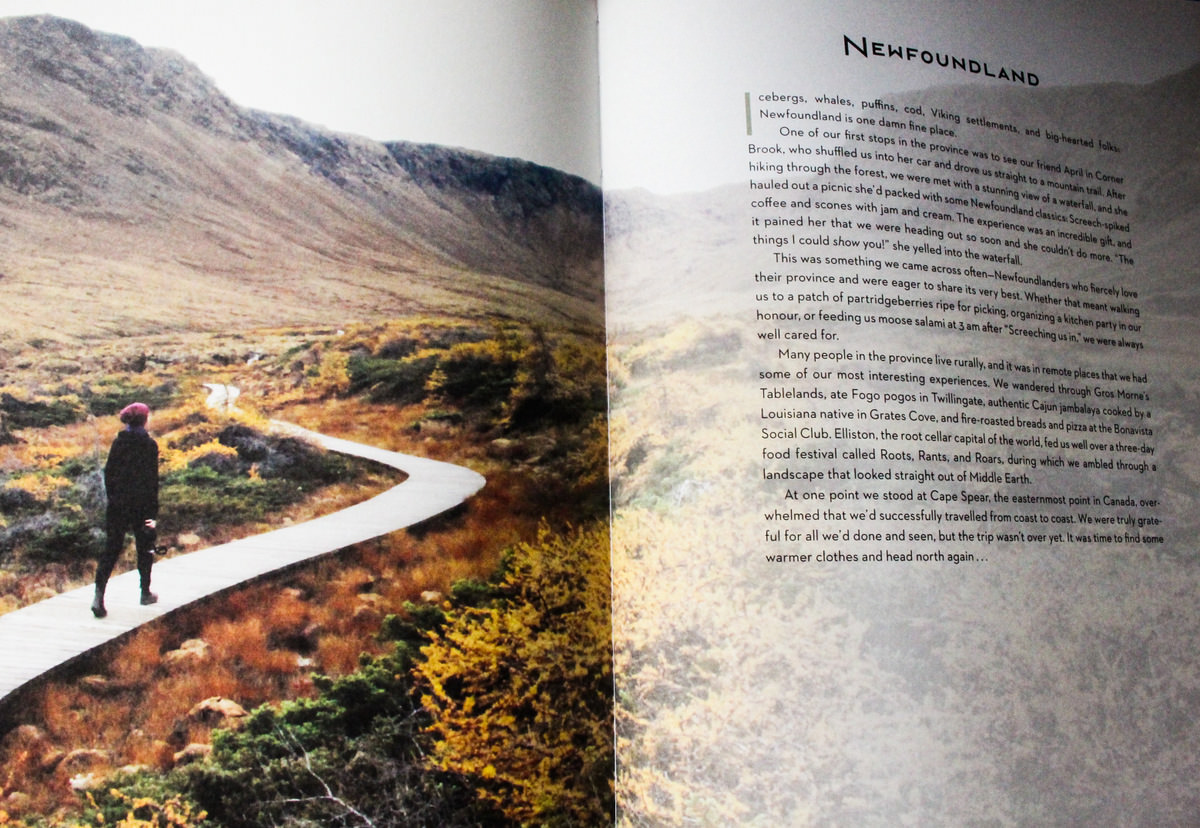 Throughout the book they would have sections dedicated to the different provinces. It started off with the section about breakfast and brunch. Then smack in the middle of it was a section about their experience in British Columbia. Then it continued on with barley pancakes. This absolutely confused me. I wish they had organized the recipes by region and screwed the idea of doing what everyone else does. 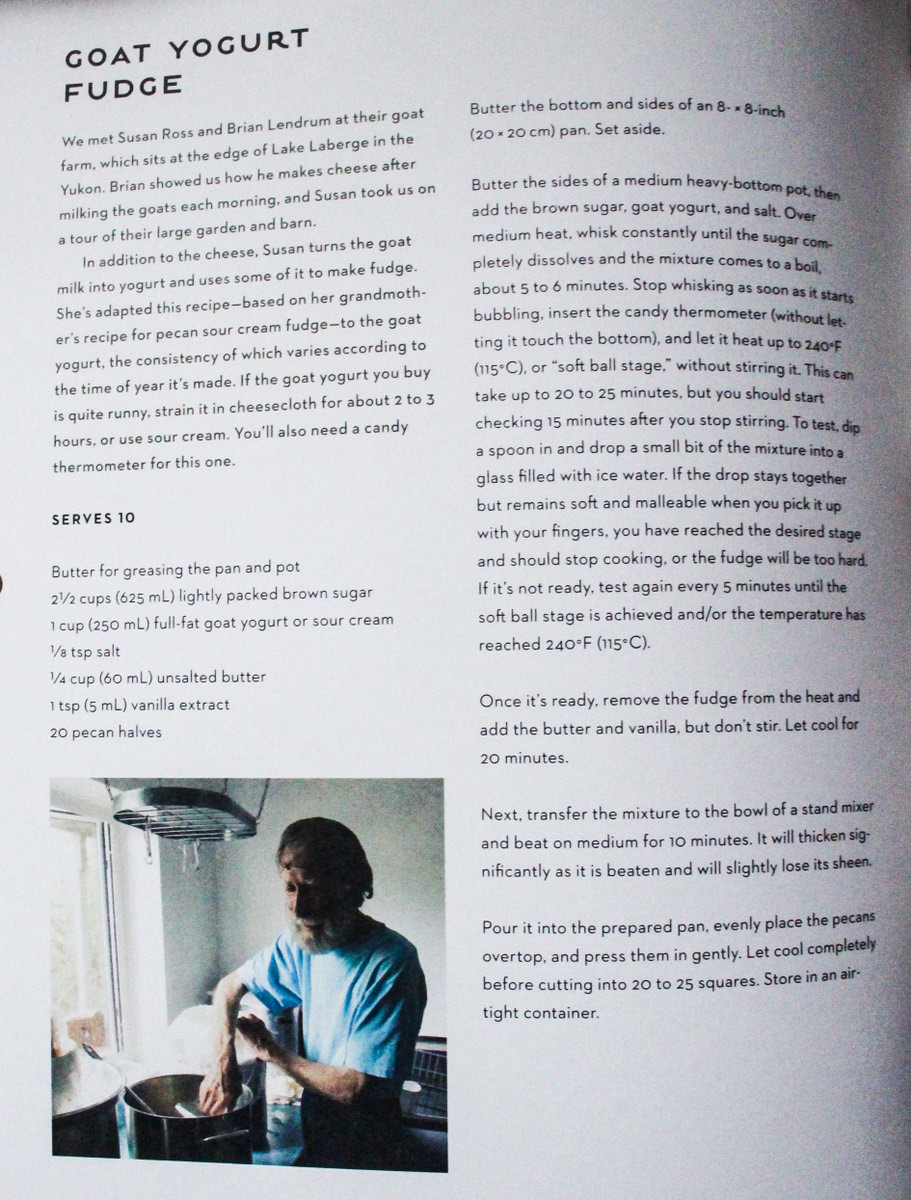 There are stunning photographs in this book but I really wanted to learn about the authors and the contributors only there was not one photo caption that I could find in the book. I gather the man photographed above is Brian Lendrum making his goat yogurt fudge but there is no way to verify that fact. This was beyond frustrating for me. 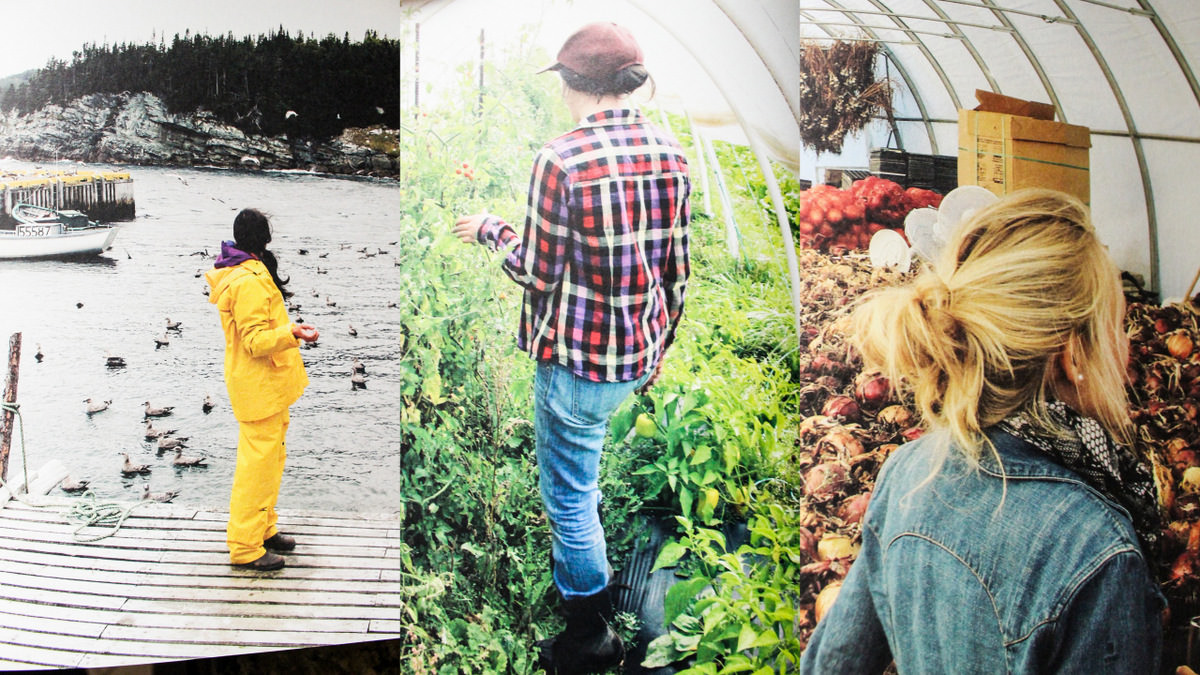 I really wanted to get to know the women behind the book and the foodies who shared their recipes but almost every photograph of the people in the books has the subject facing away from the camera. I can not believe how much this made me want to disengage with the book because I could not get to know the people in it. I just do not get it… 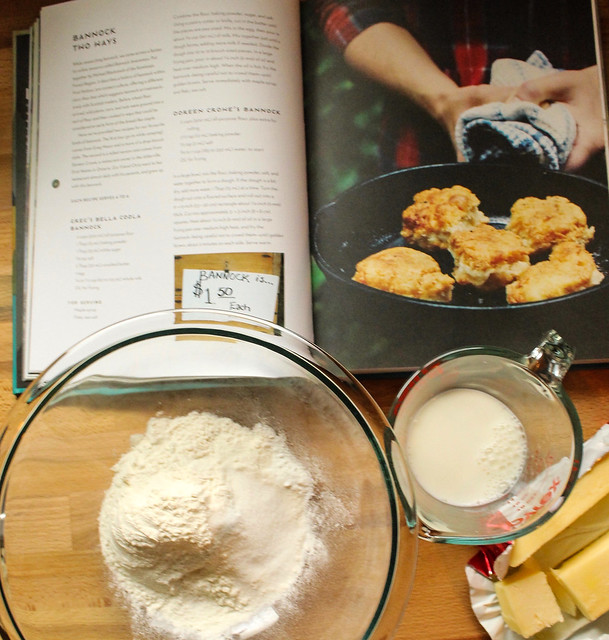 Finding recipes to test was also a challenge because there was almost always one ingredient that was so local to a particular region I could not make it: sour cherries, Arctic hare, venison, Arctic char, seaweed, Scotch lovage… I could go on and on.

Instead I tackled Greg’s Bella Coola Bannock which was fairly straightforward and made in a cast iron pan. 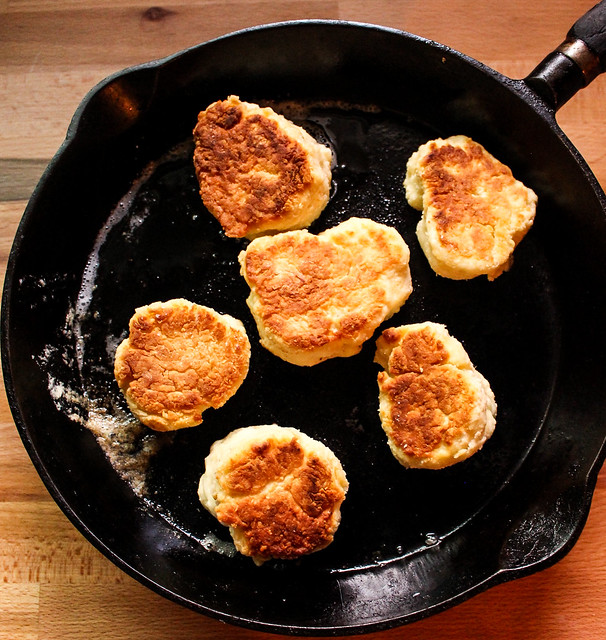 They plumped up in the pan and browned nicely. 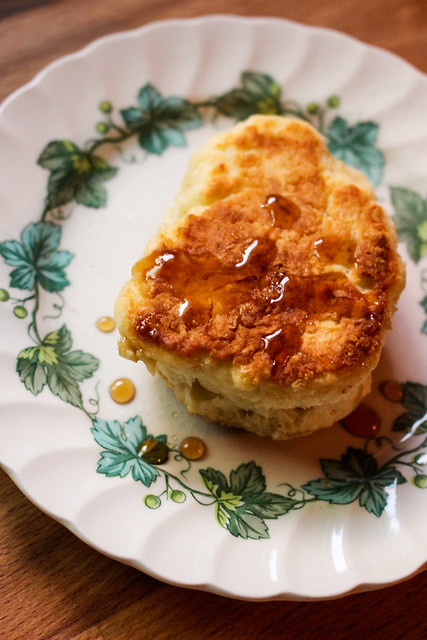 You are supposed to drizzle with real maple syrup but I only had a little left. I thought this was an OK recipe but nothing to write home about, unfortunately. 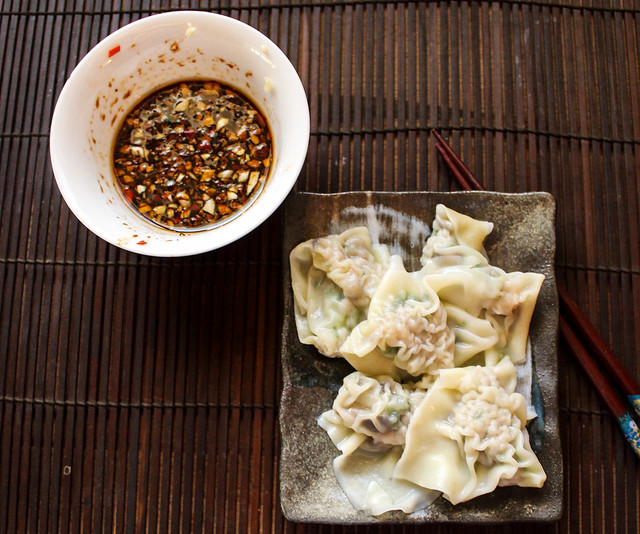 I decided to try Stephanie Le‘s Pork & Shrimp Wontons. Stephanie won the Blog of the Year award at the Saveur Best Food Blog Awards and lives in Vancouver. I thought it was the perfect choice considering I live in Vancouver too and could get special ingredients for her wontons. 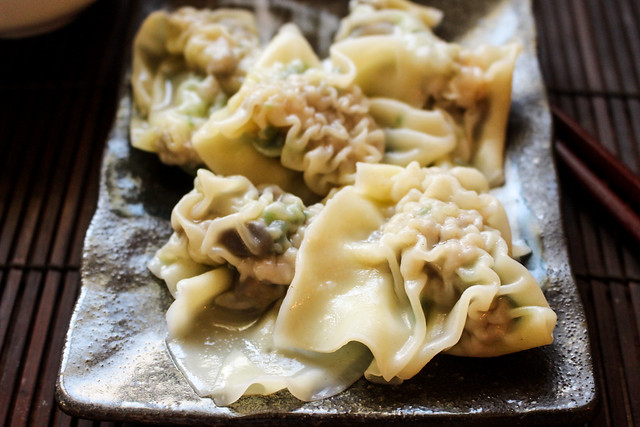 I had to go looking for Chinese black vinegar and sweet soy sauce for the recipe which I did successfully buy but could not find wood ear mushrooms. Frustrating! I used shiitake mushrooms instead. 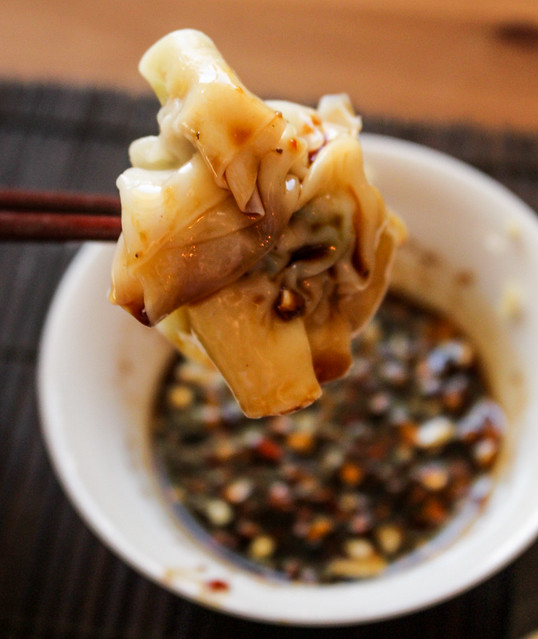 These were pretty good but again, I have had and made better. So I can not even sing the praises of Feast: Recipes and Stories from a Canadian Road Trip recipes. Damn it.

Each recipe contains a short story about the author of the recipe as well as a bit about the contributor. Which is great but it isn’t Lindsay or Dana’s story which is what I really wanted. When it comes to the food, clearly there are a lot of incredible uniquely Canadian ingredients out there but if you do not live in the region, you are out of luck making the dishes accurately in your own Canadian kitchen.

As a result, I conclude this is more of a food fantasy cookbook for the culinary Canadian out there. It is definitely a cookbook, not a foodie biography. I was hoping to see selfies and silly photos, read more stories… But! This is an exceptionally in-depth cookbook about food you can only find in Canada. It is a beautiful book that clearly a ton of work went into. If you are looking for a unique cookbook out there for the Canadian foodie-enthusiast I highly recommend it. If you are like me and want to hear the chronological story of their trip across Canada, sadly, it is a pass.