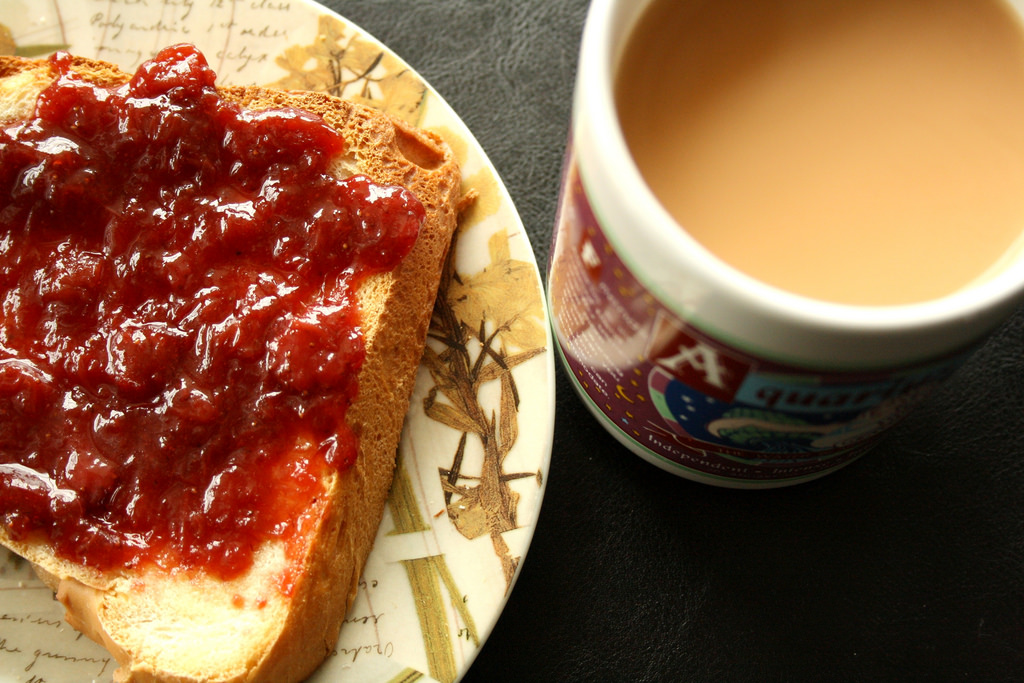 At first this post was just going to be about me taking out the Strawberry Rhubarb Jam I made last May out of the freezer so I could have a taste of summer in November but UnfinishedWork‘s interest in my Sour Cream White Bread inspired me to include the recipe for the bread as well. Why would I not originally include it? Because it was a bit of a disaster! It began as a good idea. I was talking to my Mom about this Buttermilk White Bread recipe I had but it called for buttermilk powder. I have never seen such a beast! I was going to use skim milk powder instead but Mom said, “Oh, it won’t be the same. It’ll be missing the tang. Why don’t you use sour cream?” Genius! I had a container of sour cream in my fridge just waiting for this loaf of bread.
I first put in a 1/4 cup but the dough looked dry so I added some more. So what went wrong? I forgot to add the salt (this is the third time I have done that while breadmaking, what the hell?) and I don’t know why I did this but I opened the breadmaker while it was baking which deflated the dough in some places making it look wonky. It amazes me when I screw up this much, experiment this wildly and it still tastes pretty darn good! I added some additional salt to my unsalted butter which helped boost the “proper” flavour. I hope that is the last time I make that mistake! Is there anything more comforting than toast and tea? Well not for me. It takes me right back to being a kid. Yup, I have been drinking tea while eating my toast since I was six years old.
Nothing tastes like summer more than the flavour of Strawberry Rhubarb.
Sour Cream White Breadmaker Bread
1 1/4 cups lukewarm water
1/4 cup + 2 tbsp sour cream
1 1/2 tsp salt
2 tbsp sugar
2 tbsp shortening (I used coconut oil)
3 3/4 cup bread flour
1/2 cup skim milk powder (you could probably use 1/4 but if you do, use only 1/4 cup of sour cream)
1 1/4 tsp bread machine yeast
Measure ingredients in the above order into the pan of the breadmaker pan. Put pan into breadmaker and select the Basic Cycle to make a 2 lb loaf, on light setting.