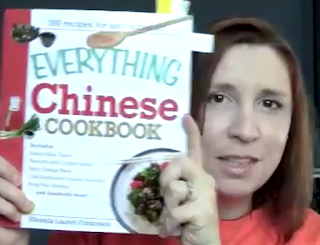 Yesterday I shared in my vlog that I have made many dishes from The Everything Chinese Cookbook that I got over the holidays. Today I am going to share with you the beef chow mien which was excellent. I want to tweak it but Reg said it is perfect the way it is. (I still think I might tweak it though.) Cut 1 lb beef flank steak into thin trips. Marinate in 1 tbsp soy sauce and 1/2 tsp baking soda (which I forgot) for 30 minutes. I did this at room temp while chopping up all the veggies and prepping the sauce which worked out great.

Add 2 tbsp oil (I used canola) to your wok. OK, I donated my wok. It was too big, needed a handle that did not get hot. So, I used my braising pan instead which I know is totally inappropriate but it’s what I got.

When oil is hot, add the beef and stir fry until it changes colour and is nearly cooked. Remove and drain on paper towels. The recipe calls for 1 lb wonton noodles but I cooked up these duck egg noodles. I added more oil and then stir fried so they were golden but still soft. Then I removed them. Add 2 tbsp oil to pan and when hot, add 2 minced garlic cloves and then soon after 1/2 cup thinly sliced carrots. Stir fry a minute and then add 1/2 thinly sliced red pepper, 1/2 cup snow peas and 1 cup bean sprouts. I bought some sprouts but as usual, they went bad on me so I did not use them. Stir fry until vegetable are colourful and tender. Mix 1 tsp cornstarch with 4 tsp of cold water and add to the center of the pan. Stir to thicken. Add the beef and drizzle with sesame oil. This took a while so when ready to serve I nuked the noodles so they were nice and hot. Then I slathered with the veggies, beef and topped with some green onion. I personally found this dish a tad subtle so I may make more sauce next time and add some heat. That said, I still loved it. It really did taste like a dish you would get at a Chinese restaurant! I recommend doing all the chopping and putting the sauce together ahead of time and you will have dinner ready in no time at all and it is quite healthy and tasty!

I give this recipe four out of five wooden spoons and Reg would say I am crazy and would give it five out of five.