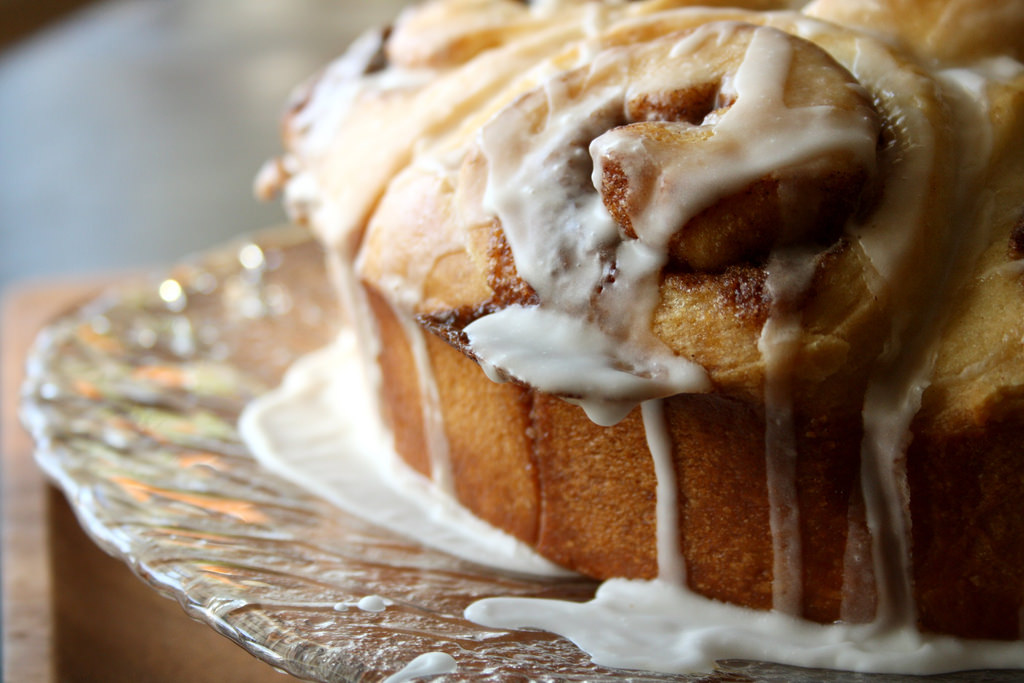 This month the Food Network Cooking Club November’s challenge is for Michael Smith’s Cinnamon Rolls. What could be better to make in the fall than cinnamon rolls?! They are my favourite thing to eat any time of the year but when it is getting cold outside and winter is just around the corner, I can think of no better comfort food in the world. What sets Michael Smith’s recipe apart from others that I have tried is that he actually warms up his milk, brown sugar, vanilla and butter on the stove first. I kept the heat as low as I could to melt the butter but by the time that happened the mixture was steaming! I was so nervous about adding this hot mixture to the dough and yeast mixture, thinking it would kill the yeast but it didn’t! I used my mixer as he recommends in the recipe to bring the dough together, adding the hot milk mixture and then four eggs one at a time. You let the dough rise in an oiled bowl and then finish by kneading the dough by hand: What a sticky dough this is! I had to add a lot of flour to knead it for the five minutes but it was still a beautiful dough. I rolled it out into the shape of a large rectangle and then added the filling: butter creamed with brown sugar and cinnamon: You want to leave a 1″ border along all of the sides, I use a palette knife to spread the filling across the dough. Then you roll it up: You slice the dough into 1″ slices and put them in a baking pan (I used cake pans) and let them rise again: I added some melted butter on the top to help keep them moist and give them some colour.
These were very beautiful cinnamon rolls but I must admit, I think I like my cinnamon buns better. I always like to try different versions of recipes and it is so much fun to participate in the Food Network Cooking Club Challenge. I really can not wait to see how other people’s cinnamon buns turn out. Thanks for the inspiration Food Network and Michael Smith!