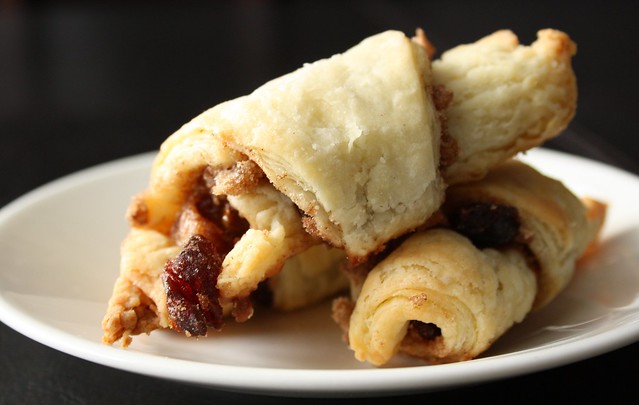 I was asking people at the Canadian Food Network forums for the best holiday cookie ideas and Ava suggestion this Rugelach recipe. I had never heard of them before but wow, they looked absolutely delicious and realized I could use my candied chestnuts for the filling. Rugelach is apparently a Jewish pastry which I had no idea while I was making them and guess that there is a little touch of Christmas to them with their chestnut and cranberry filling. I decided to make half the recipe since I had many different kinds of cookies to make and limited resources. I was excited because I had never made a cream cheese cookie dough before but had heard so much about it. It was also nice to make this in the food processor: 1 cup of flour, 1/8 tsp salt, 1/2 cup cold unsalted butter cut up, half a package of cream cheese, a little less than 1/4 cup of sour cream and 1/4 cup sugar. Mix until crumbly. You can tell by the picture that there are lots of little separate chunks of butter and cream cheese so I did not overwork the dough. No loose flour means it will be easy to come together. Divide dough in half, shape into disc and cover in plastic wrap for an hour. (The recipe says two but it was not necessary and I had a lot of baking to do!) The original recipe calls for 1/2 tbsp of cinnamon, 1/2 cup of finely chopped walnuts and 1/4 cup of raisins but I used my candied chestnuts and strawberry-flavoured dried cranberries instead. Ready to roll! I rolled it out into 9″ rounds like the recipe says: I covered it with the filling and pressed the filling into the dough. I even trimmed the second batch with a pizza cutter for a pretty edge. You were supposed to cut it into 12 portions but the best I could do was eight, I am really not good with reading instructions and they looked fine to me. I rolled up the cookies from wide side to narrow tip and some of the filling fell out so I put it back inside. Pretty already! I baked in a preheated 350F oven for around 18-20 minutes, you are supposed to have them in there for 22 minutes but I like my pastries very lightly golden: These were perfect and wow, were they ever flakey! Now they were not as spirally as most rugelach seem to be, mine looked more like a turnover but who cares?! They were so yummy, now I wish I had made the whole batch, these are totally worth it.