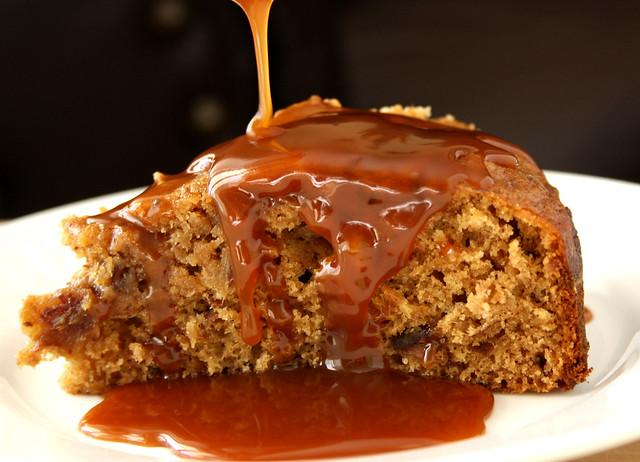 It has been cold and snowy and miserable here so I wanted to make the ultimate comfort food. On a rare sunny but brutally biting frozen day, I made Rachel Allen’s Sticky Toffee Pudding. I had this oddly-named treat for the first time at Moxie’s and totally fell in love with it. I thought it was going to be what I considered a “pudding” but found out that it is a super moist spice cake slathered in toffee sauce.

I had a lot of Michael Smith’s Butterscotch Sauce leftover so that is what I am drowning the cake in with one hand while taking a photo with the other. I had one chance to get this photo right and thankfully it came out all glistening and wonderful, just like the cake. Before I began the recipe for sticky toffee pudding was a complete mystery to me. How shocked was I to find out that it had dates in it! And yes, this recipe requires the use of a scale and being a British treat, it also requires tea! You chop up the dates and add the tea to a sauce pan and bring to a boil. Let simmer for a few minutes. While that is going you begin by creaming softened butter and brown sugar together. Then you add in the three eggs. Here is where I got a little confused. What the heck is “mixed spice”? I assumed it was a combination of cinnamon, cloves, allspice… I decided instead to add a tsp of cinnamon and some freshly ground nutmeg. Combine and then fold in the dates. I also got confused by the use of self-raising flour. In total I added 3 tsp of baking powder and 1/2 tsp of salt to regular all purpose flour, sifted it together and added it to the batter. Look at how moist it is! When I make European recipes that use gas marks as temperature gauges, the oven tends to run a little hot so I baked it at 350F but I took it out ten minutes early. I could smell all the spices, the cake had pulled from the sides and the toothpick came out clean. I wanted this cake to be really, really moist. If it was dry, it would be all kinds of wrong. No, it did not fall, that is just the dent from my silicon baking glove which drives me crazy. If anyone knows of really good gloves for the oven, please let me know! I dove right into this treat and was so happy with how it turned out. Very moist and the sauce just took it over the top. I just wish I had the thinly sliced almonds to garnish the dish like they do at Moxie’s. Wonderful contrast. But hey, I am not complaining. This was delicious! I probably will chop up the dates a little finer next time but I will be making this again.

Do not let the name scare you or put you off. My husband was wary of this treat because of the name but I kind of nicely “insisted” he have some. He asked for a very small piece and like me, at Moxie’s a year ago, was very pleasantly surprised. I can not think of anything more comforting in the dead of winter than a warm piece of cake slathered in a sweet buttery sauce and a big mug of tea.

I give this recipe, four and a half out of five wooden spoons.