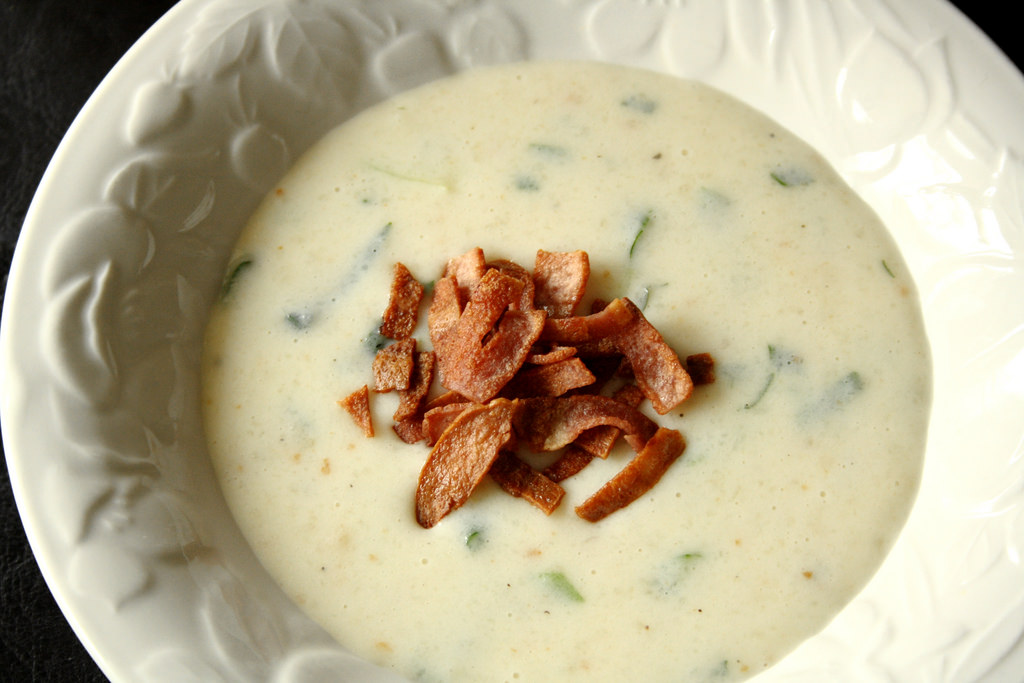 When TheSweetOne suggested I try making this recipe for Baked Potato Soup, I was worried. Worried because in general, I am one of the few people in the world who is not very impressed by potatoes. If I am going to eat a starch, pass me the noodles or bread. On Friday we had such a dark and depressing day, I knew that it was the perfect time to make some comfort food and take a chance on a new soup recipe. This recipe begins with baked potatoes of course! I divided the recipe in half and it still made a substantial amount of soup. I pricked two potatoes and baked them in a 400F oven for an hour. You could always use leftover mashed potatoes for this recipe, in fact I bet they would make this soup extra delicious. I got even more nervous when I read that I was supposed to gradually mix flour and milk together and then heat on the stove. What the? I have never heard of making a thickener this way before. Normally you would cook flour into fat and then add the liquid but nope. You gradually whisk the two together and then cook over medium heat until it thickens. And it did just that! From there you add the mashed potatoes, good quality sharp cheddar cheese (notice it is not orange) and season well. Seasoning is very important for this recipe, not enough salt and it will not work. After the cheese melts you remove it from the stove. Add some sour cream and green onions and you are done! My potatoes were not mashed enough so I used an immersion blender to bring the soup together. I kept thinking, this is going to have no flavour. Where is the garlic? What about broth? Or wine? Or mirepoix??? Thick and luscious, I was shocked at how much flavour there was in the soup. It tasted like the perfect baked potato. The kind that is slathered in butter and full fat sour cream that I never allow myself to eat. Here it was in a soup. A LOW FAT soup! I was shocked and amazed.
I could tell my husband was wary of it but I knew he would like it. The next day I slowly and carefully reheated it which took a while but I did not want the soup to break and ladled it into a small bowl. He said, “Wow…. this is really… really… good!
Two thumbs up in our house means five wooden spoons, thank you TheSweetOne. This soup really is a winner. It is easy, low fat and tasty. Now that is my kind of recipe!