Last night Recipes to Riches began! I had a blast tweeting through the first episode last night.

The judges this season are Gail Simmons, Vikram Vij, and Arlene Dickinson. The host is Carlo Rota and this year the show has been produced by the CBC. Missed the first episode? You can watch it online here.

They kept a lot of the same format but I think the quality of the show has already improved. The discussions by the judges were very professional and the energy was high. Carlo Rota was entertaining and genuinely seemed to care about the contestants and their foodie dreams. 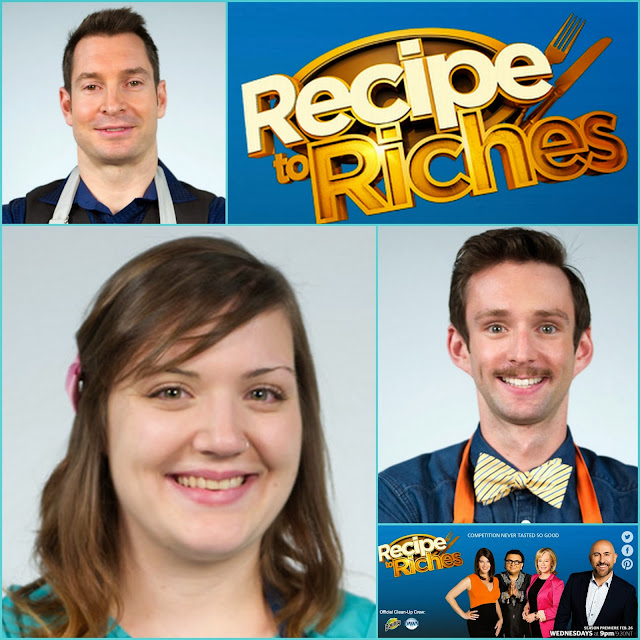 First we were introduced to Brad from Calgary, AB, who is Canada’s fourth best bobsledder. He created Co-Co Nut-Nut Bars which he claimed are “clean food for you body” which got my back up immediately. I know he was attempting to make a healthier treat but that is food-elitism talk to me!

Erica brought her Maple-Bacon Butter Tarts to the Recipes to Riches table made with her Dad’s harvested maple syrup. Only 19 and from Penetanguishene, a small town north of Barrie, Ontario, her tarts look really tasty and what could be more Canadian than combining bacon and maple?

Bow-tie-wearing Jesse from Port Coquitlam, BC, made Chocolate Raspberry Cheesecake Bites that were housed in a chocolate cup with graham crackers, raspberry and hand-piped cream cheese topping. The dish was inspired by his sister who can not have a lot of sweets but she can indulge in a bite of cheesecake. My favourite moment of the episode was when Jesse recognized Arlene from Dragons’ Den. It was so cute and something I would have totally freaked out over too!

For me, the biggest change was the introduction of Kitchen Commander to the kitchen. Chef Rob Rainford had this job and wow, was he ever tough! There were no chef coaches this time, just Chef Rob making sure Jesse’s tarts were uniform, Erica’s tarts would have to have 2/3 LESS bacon in them and Brad was not allowed to use the sweetener Xylitol and so he used Stevia instead.

The first two issues I could understand but I did feel that if Brad’s use of Xylitol in his original recipe was not (for lack of a better term) kosher, he should not have been allowed to get a gold ticket in the first place. I do not think that was fair to him as a contestant.

I will be taste-testing the winning product over the weekend but do not want to spoil the outcome for those who have not seen the show yet. For those who have, check out the product reveal here.

I will say that I was very grateful they did not use cheerleaders or models this episode. Quite the opposite which was a bit surreal. Everyone seemed very kind and considerate which brought a smile to my face. I hate it when competition brings out the worst in people. If the biggest drama happens in the kitchen with overflowing flour and hand-piped tarts? I am good with that.

I am so relieved! I knew the show was going to change a little but so far I think it is all for the better. I adore the judges who I am huge fans of and the host was absolutely lovely. It is odd that we only saw Galen Weston in the intro but I have no doubt he will make an appearance at the end of the five-episode season.

Well done Recipes to Riches, I can not wait to watch more!