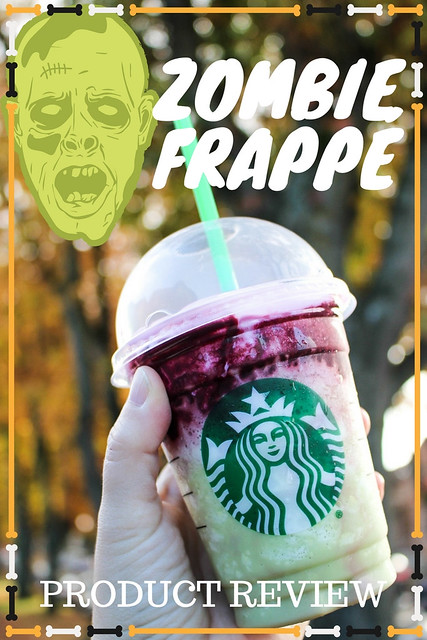 It is TRUE! Starbucks has done it once again and come out with a Halloween frappuccino. Last year I was ripped off by their fang-less Frappula Frappuccino. I was truly disturbed by their Unicorn Frappuccino in the spring. I ALMOST gave their new Zombie Frappuccino a pass. But! I love all things zombie and Halloween so I went to pick one up. 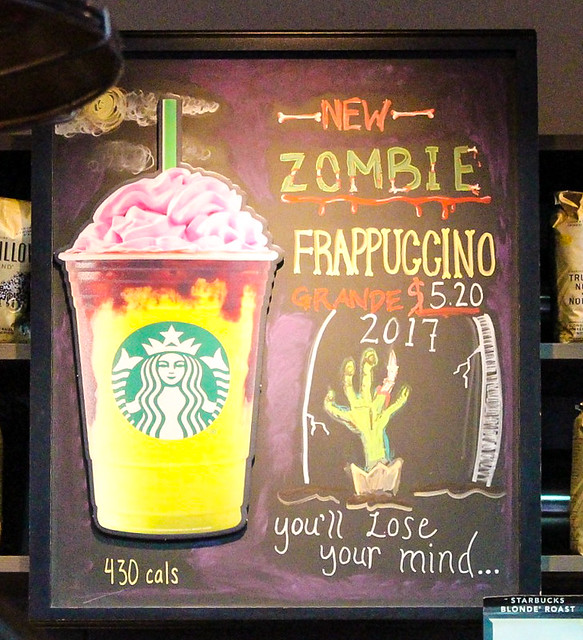 It is interesting that on their website it says the drink is 290 calories but on their board it says 430. Perhaps it is referencing a different size. I personally ordered the smallest one. When I asked if the drink was selling like crazy I was told that I was the first customer who he had requesting it. He also said they had JUST put up the sign. It was the first day (they will be available until Halloween) and I was there before noon. Don’t judge. 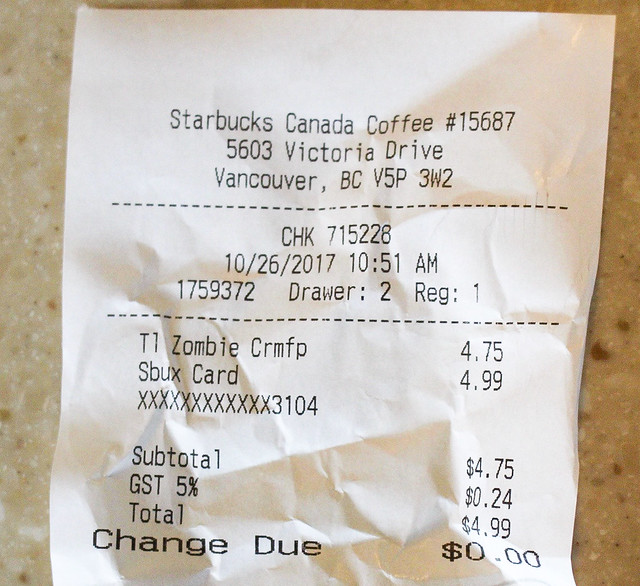 Altogether I paid a whopping $4.99 for my creepy beverage but thankfully I already had some funds on my membership card. 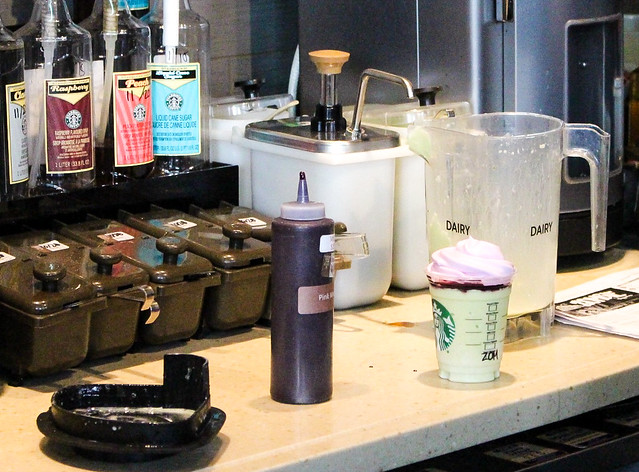 My server had a printout of the recipe ready to go and she made my drink meticulously, checking to make sure she did it right which was impressive. Totally different than my blasphemous unicorn experience. I hate whipped cream and always request for it not be included but it really is part of the product so I kept my mouth shut. 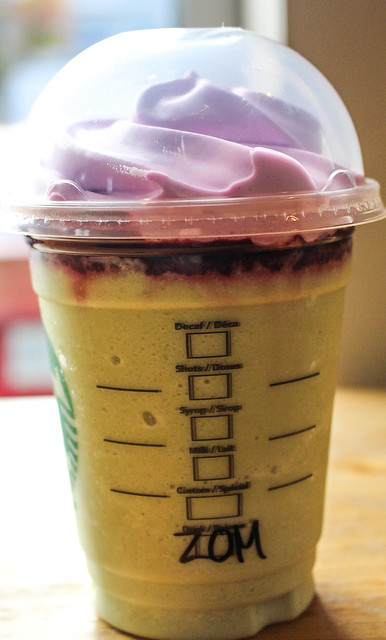 There she was. My Zombie Frappuccino! Or “Zom” as the cup said. 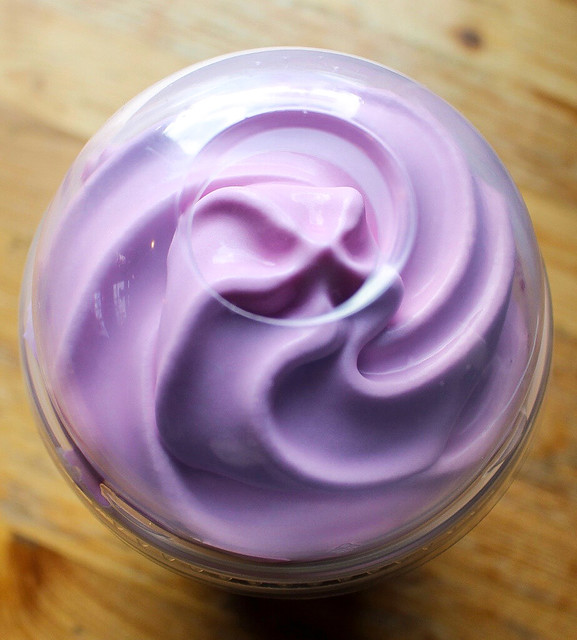 OK I have to say, that is pretty damn pretty. Wow. 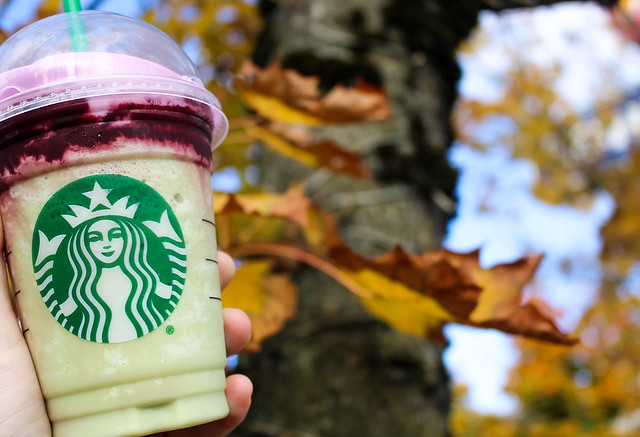 Aesthetically speaking, I like that they went with old school zombie green for the base. Having the pink and red on top bleed into the beverage was kind of cool. Very horror-like which I respect. 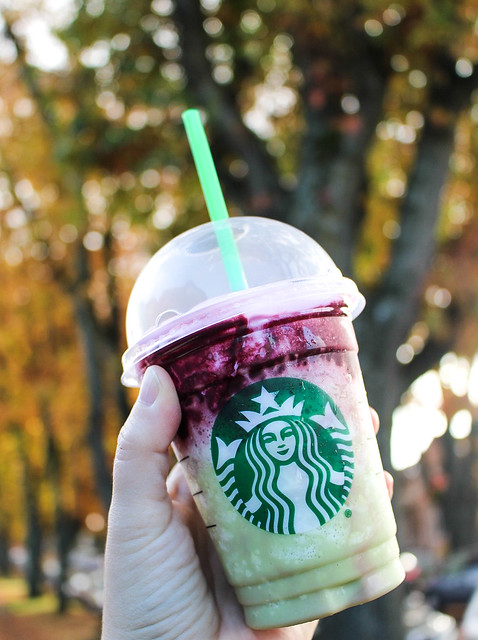 The green is actually supposed to be a green caramel apple flavour. The drizzle is dark mocha and the topping is a “brain” of pink whip. 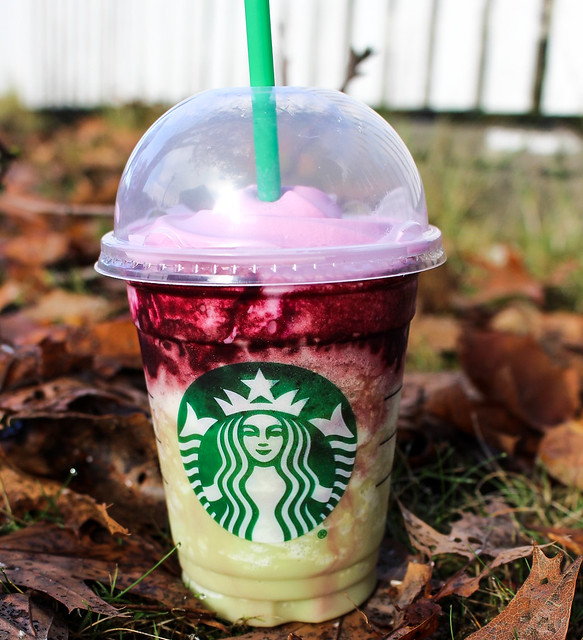 I absolutely could NOT taste the caramel. It was all green apple for me and… I liked it! It was not super sweet this time (thank the foodie gods) and I was surprised at the refreshing creamy apple flavour.

I really enjoyed the green part of my drink but the mocha? I had no time for that mocha. It just tasted weird and mocha is one of my favourite flavours. The whipped cream did nothing for me, as usual. What a waste in fat-filled calories! 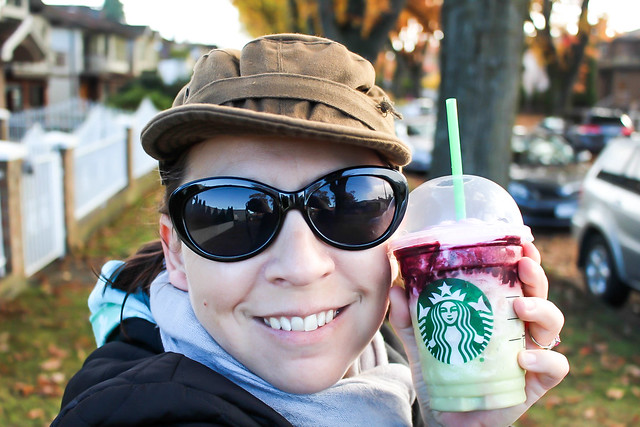 The base of the drink felt more like a witchy concoction to me which I really did like, despite the caramel being completely absent. I think if they had completely gotten rid of the mocha bleed and replaced it with a true caramel drizzle people would have LOVED it! That being said, they did not and went for weird flavour with a gory look. I admit they were brave and I am impressed I liked any of it at all.

So far it is the closest Starbucks has come to impressing me. It is far from perfect. A lot of people have written to me informing me that they hated it but I think they got more of that mocha drizzle than I did. Other foodies have confirmed to me that they also did not taste the caramel at all which is a shame. A ton of potential but the foodie alchemists at Starbucks still have not gotten it quite yet. They did, however, get my $5.

I give this product three out of five wooden spoons but can not guarantee yours will taste like mine. Clearly not everyone is following the directions as strictly as my barista did!