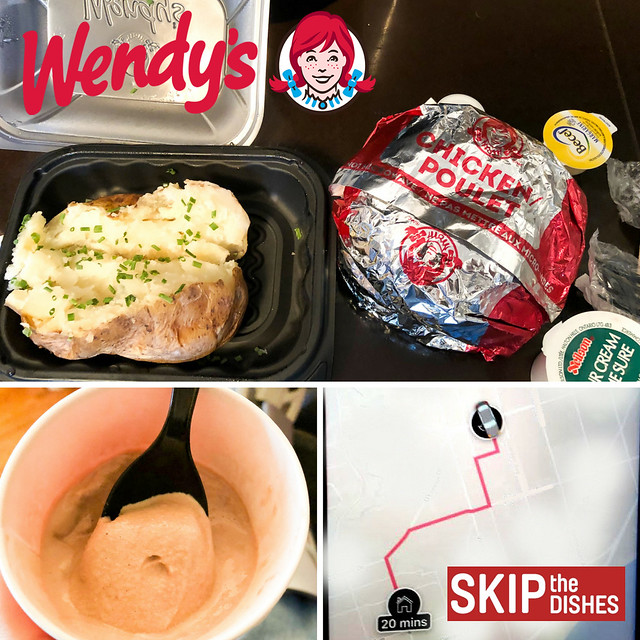 Disclaimer: The following foodie participants requested that I protect their anonymity so the following review will be coming from undisclosed sources. Please note I was referred to as evil and the devil for being such a bad influence. I am absolutely honoured by both titles. 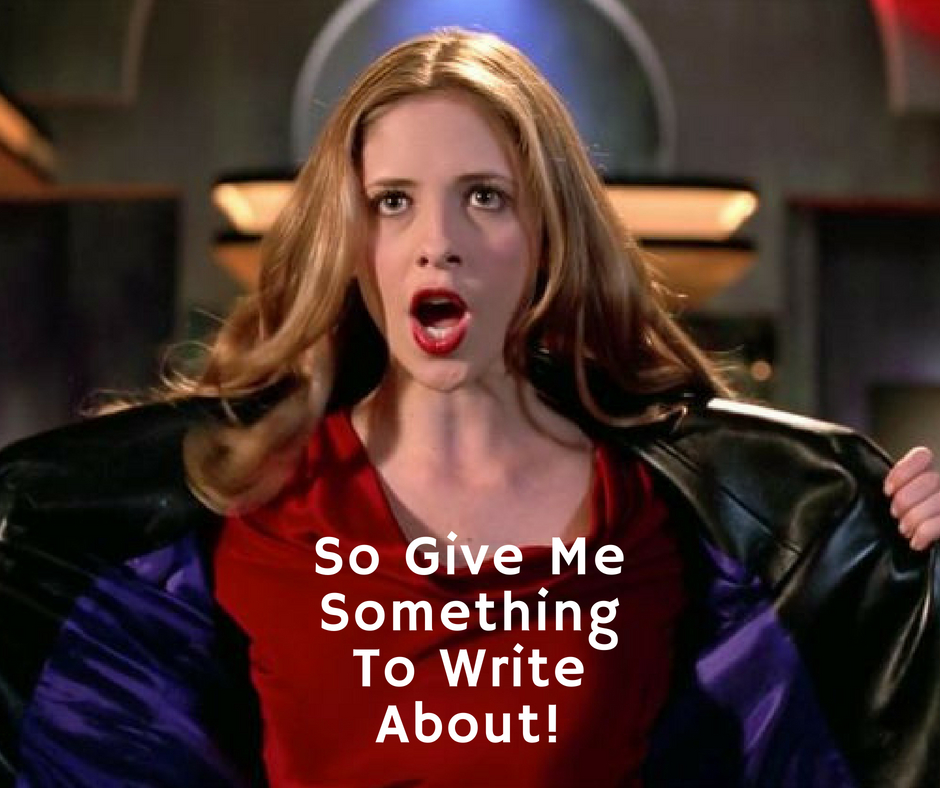 To creatively and incorrectly paraphrase Buffy from Once More With Feeling, come on universe, “So give me something to write about!” I hurt my leg, I can not do crap and want to write about food. Even worse, I watched all of Big Brother Canada which ended WEEKS ago and I was STILL craving Frosties thanks to Wendy’s product placement on the show.

Damn it, that worked on me like a charm. I had not had a Frosty in years and years. Perhaps decades. 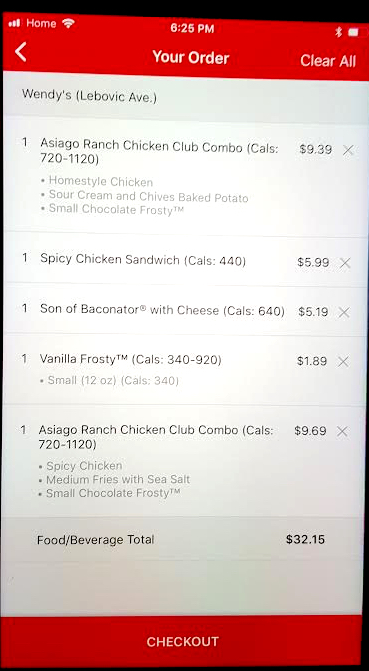 Please note this was our total before taxes, delivery fee (+$4) and tip

Ontario election night was upon the province and the people I was with did not feel like cooking and I do not blame them one bit. We all need a comfort food with minimal effort! So I casually dropped the idea where I was at the time that we get dinner via Skip The Dishes and wouldn’t Frosties be a nice treat? Turns out you can add them to your combo as a beverage which was perfect for me since I do not drink pop. It worked! They were in! 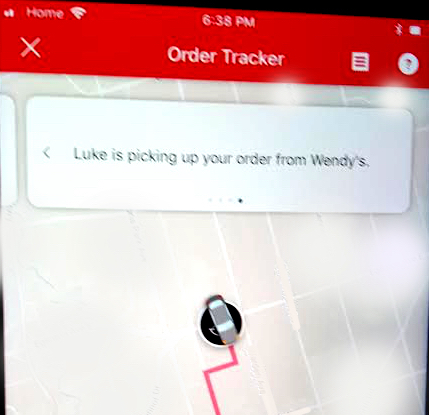 OK, we had a ton of fun watching “Luke” pick up our order and then spin in circles sometimes on the way to where we are. I will admit that we all had Luke Skywalker in our heads as our delivery person and the jokes for the 24 minutes we waited went on and on… We laughed so hard the whole time and then… 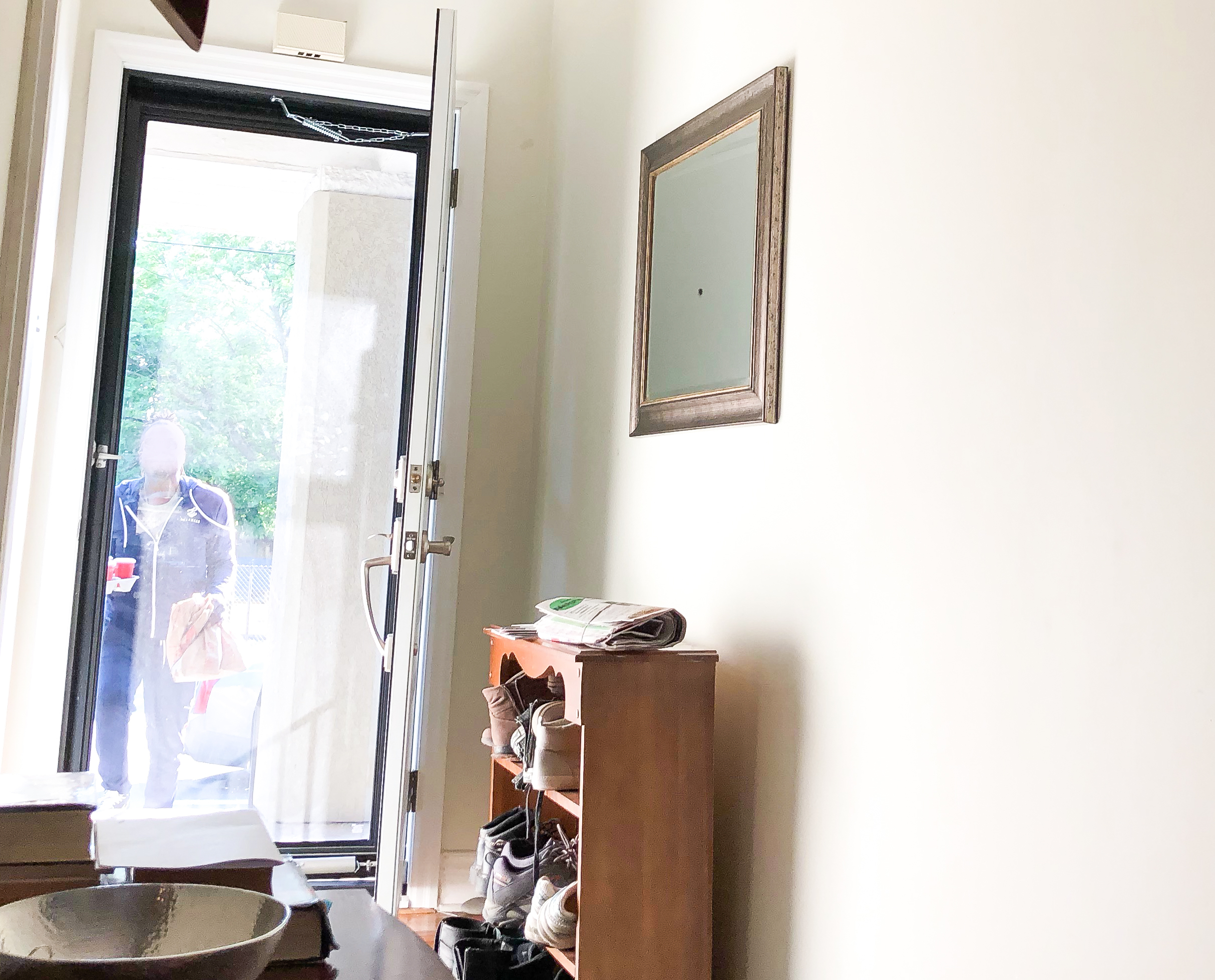 Yay!!! Our food arrived!!! Star Wars was obliterated from our minds with thoughts of food and Frostys. 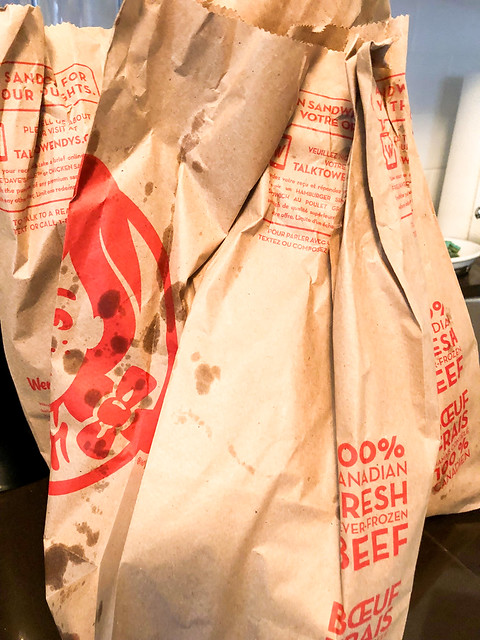 Wendy’s individually packaged the meals in their own bags which helped because me and another person ordered the same sandwich but hers was spicy and mine was not. That would have been really bad to get those two mixed up! 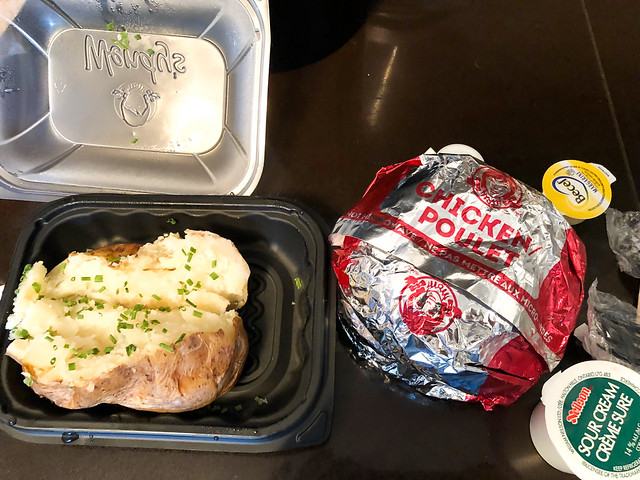 I could tell my chicken sandwich apart because mine came with a baked potato with chives and sour cream. 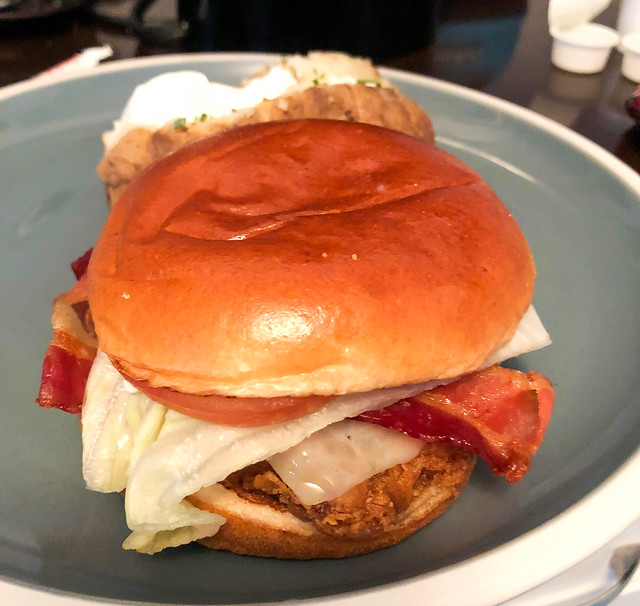 My Asiago Ranch Chicken Club Combo had great bacon on it, the food was hot, the veggies were not wilted but there was not a lot of flavour. It really seemed like there was just mayo on there, not a heck of a lot of ranch flavour unfortunately.

The other person who got the same combo said the chicken was quite spicy but tasty. I think for this sandwich to work, you need the heat. I have tried it before but it is too spicy for me. Everyone who got one mentioned that it was hot so for spice wimps like me… Get a burger! 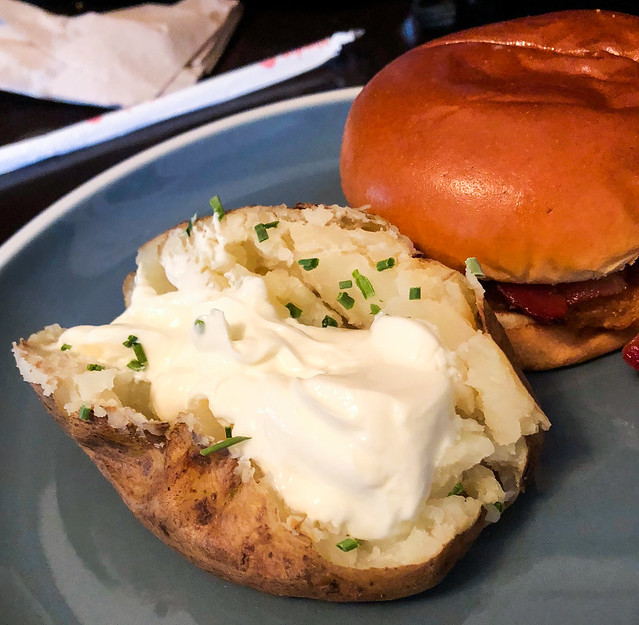 Surprisingly the baked potato was very good! They even included some Becel margarine and I was good to go. I just added it and the sour cream and it was great. No crispy skin but what can you expect from takeout. This was much better than I expected.

Sadly someone got the fries as a side and they were a total toss away. Not worth it at all and they looked like it. Very disappointing. 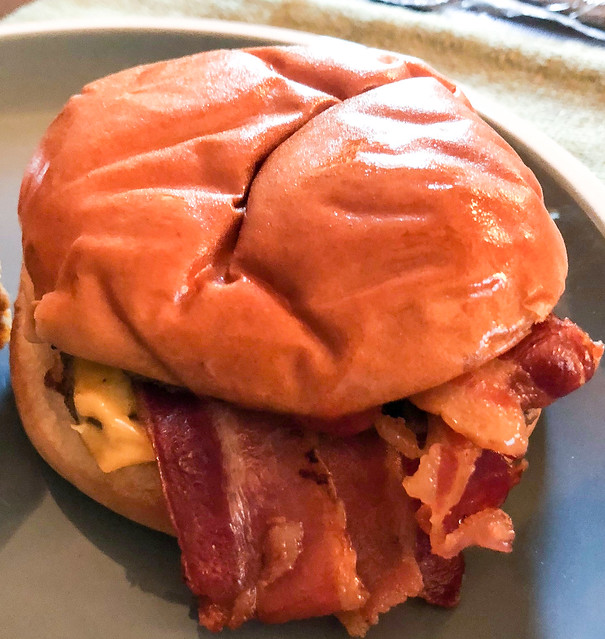 The Son Of Baconator With Cheese is what I should have ordered. Actually on Big Brother Canada everyone order the Baconator and I should have gone for it. The review of this one was that it was a tasty burger and the bacon was quite good. Not as good as Square Boy (review to come) but then… Square Boy is the BEST! 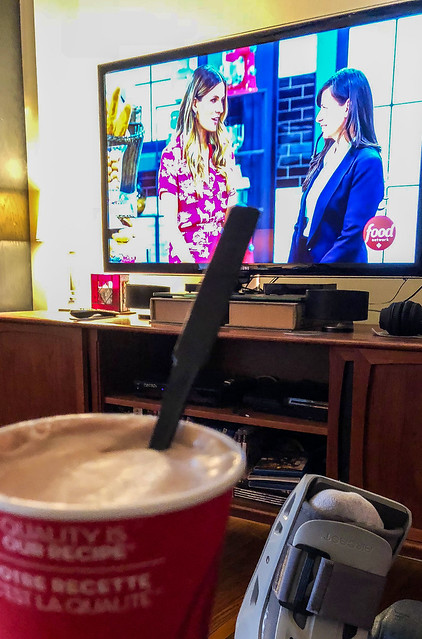 Watching Top Chef Canada after polls closed and results were in…

Finally… The Frosty… I got a small chocolate and it was just as I remembered it. Boy, did I need that cool chocolate creamy comfort food on election night. 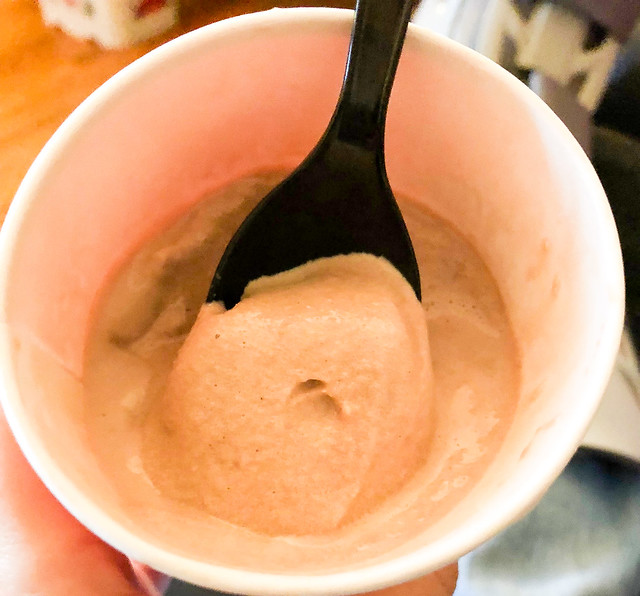 We averaged a bit over $10 per person plus taxes and tip which for delivery is very reasonable. Yes, we could have saved by going to a Wendy’s directly but hello, injured foot! Yes, my cunning plan to get a Frosty worked but there were a few disappointments in the food. That said, a lot of people online had recommended salads to me which apparently are fantastic, according to my foodie friends. I thought getting chicken was a smart in between choice but mine was bland and boring. I should have stuck true to my foodie POV and gotten the Baconator.

I have no complaints when it comes to Skip The Dishes. It was once again dangerously fun and easy to use. We got the food in under half an hour (if their countdown was accurate, some minutes seemed longer than others) and because you pay up front you just open the door and say, “Thank you” and get your food!

I would like to note that you can always order from local restaurants from Skip The Dishes and not just fast food. I look forward to eating around Toronto this way while my mobility is significantly reduced. Considering my current situation, this app is helping me start to eat my way around Toronto. It is only just the beginning.