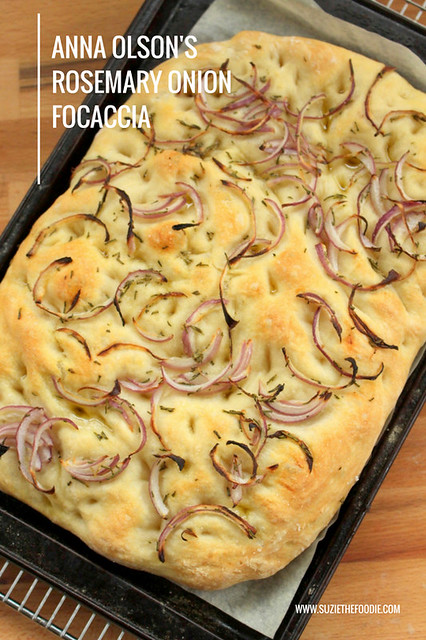 This recipe comes from the cookbook Bake with Anna Olson: More than 125 Simple, Scrumptious and Sensational Recipes to Make You a Better Baker. I got the book and an autograph by Anna Olson when I went to her book signing at The Gourmet Warehouse the other day.

I chose it because I have never made a focaccia I like and in the intro to the recipe Anna writes, “This dough is easy to mix and knead and produces consistently delicious results.” In Anna, I trust. So I made it over the weekend.

Please note: this dough requires THREE rising times so it is going to take all day to make. Also, this recipe makes TWO batches of focaccia. 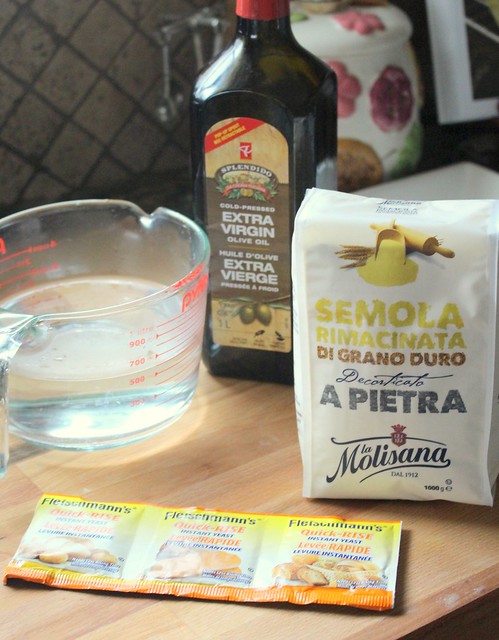 I went to Killarney Market to look for the semolina flour and they had it! It had the word “semola” on the front but it was in fact, semolina! I should have gotten some coarse sea salt though… 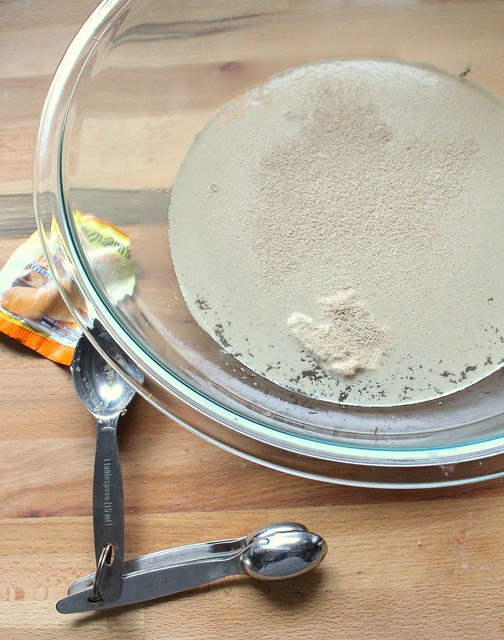 First you want to mix the water with the yeast in a large mixing bowl. 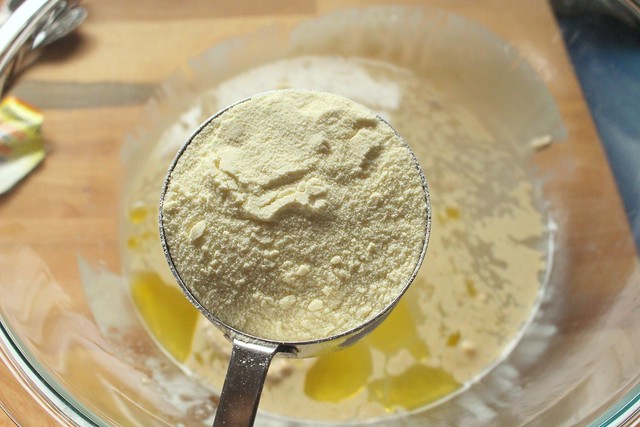 Then add the oil and semolina with a wooden spoon until blended. 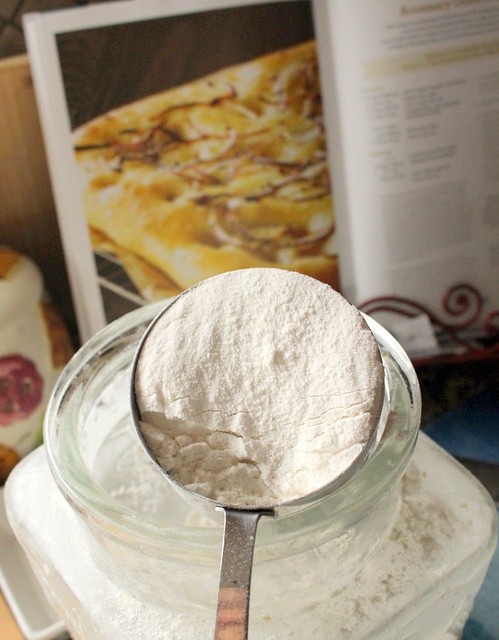 You are going to gradually add the flour to the dough until it becomes too hard to incorporate the flour with a wooden spoon. 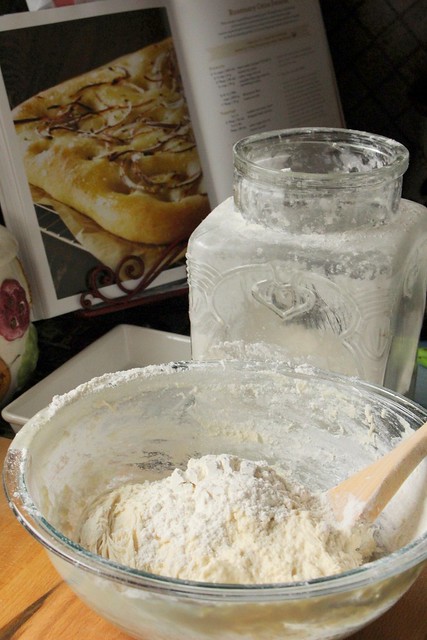 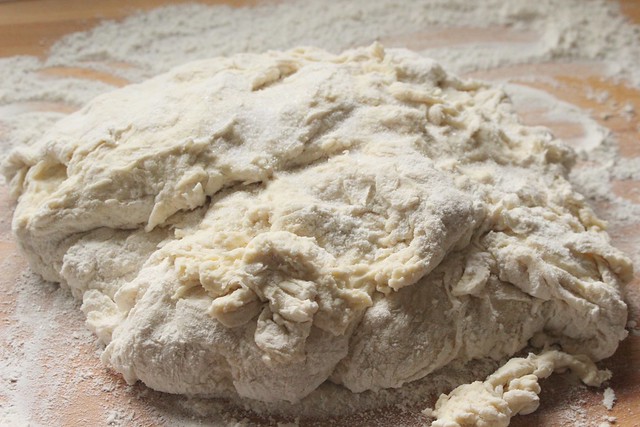 Turn the dough out onto a lightly floured work surface. Then add the salt.

OK, this confused me. You just sprinkle it with salt? I only had fine salt and used half of what was called for because, well, there would be more of it than coarse salt. Make your life easy… Use coarse salt and knead it into the dough. 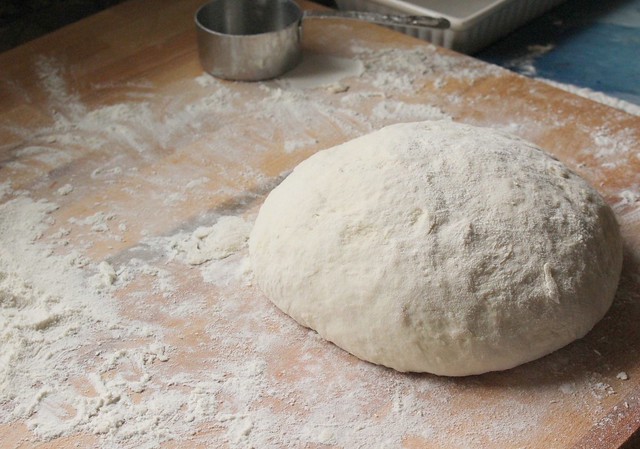 Knead by hand until all the flour has been worked in and the dough is smooth and elastic. This takes about 10 minutes and she was right, this did not hurt my hands, the dough is so crazy-soft! 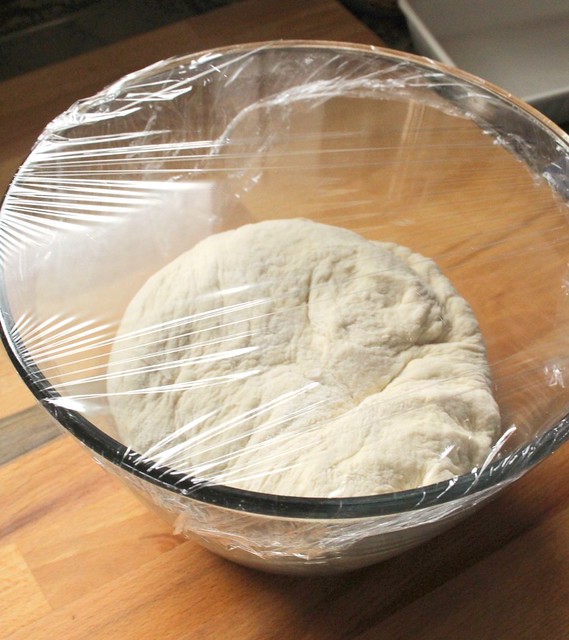 Place the dough in a large bowl and cover with plastic wrap. 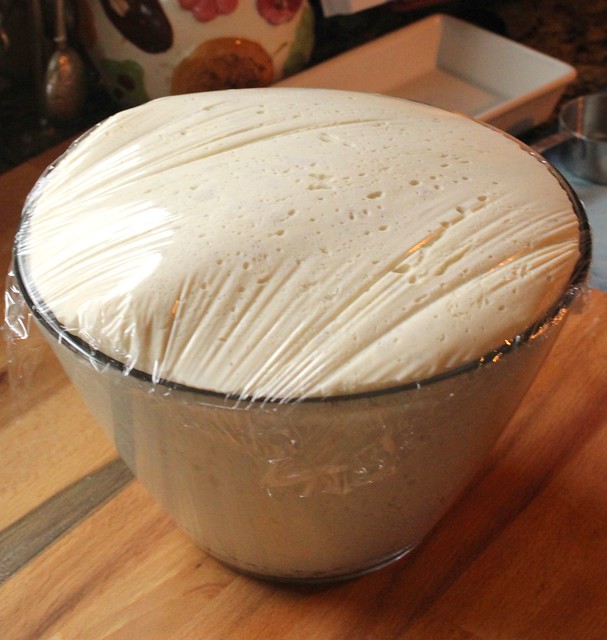 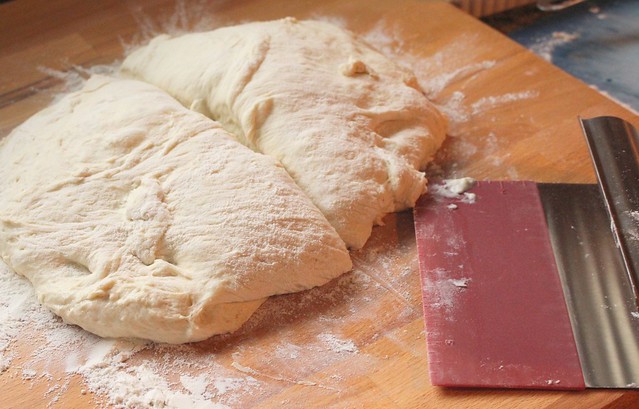 Divide the dough into two. You can go ahead and make two batches but I froze one of the doughs instead. 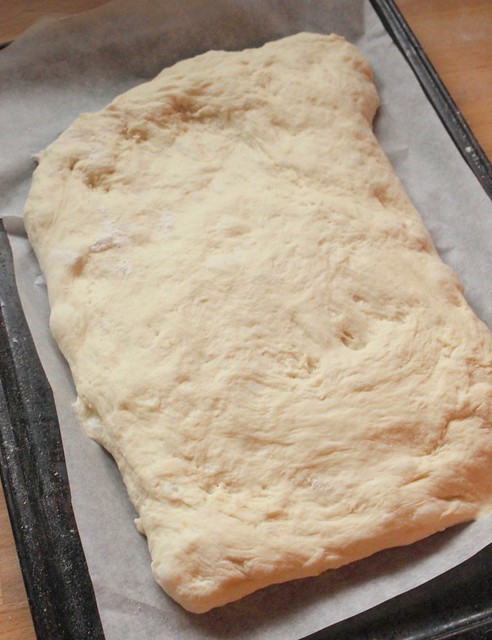 Roll out the dough to 15 x 10″ and line baking try with parchment paper. Sprinkle with semolina. 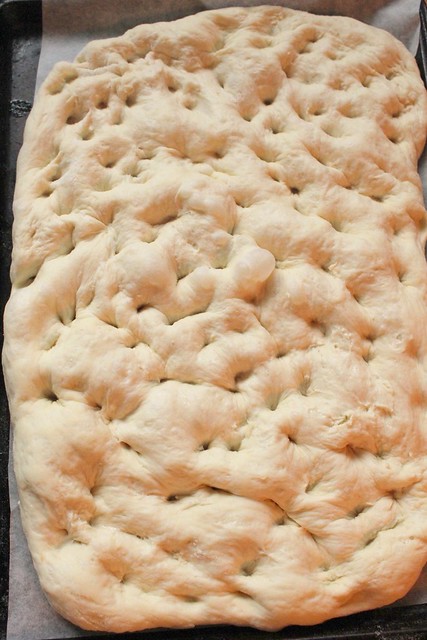 Remove tea towel and use your fingers to dimple the dough. Cover and let rise 45 minutes. 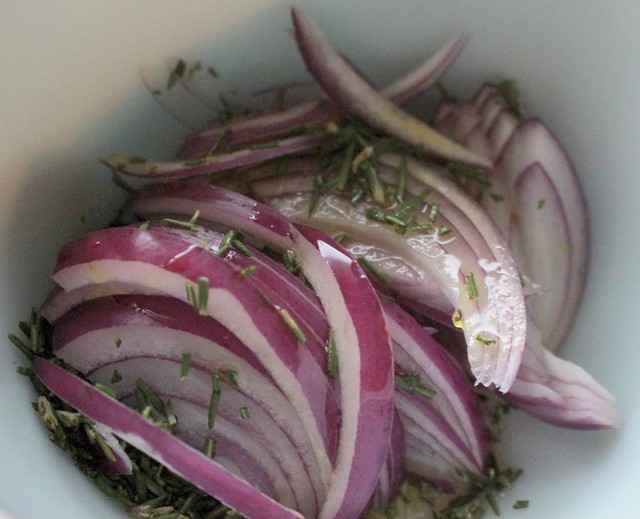 Toss red onion and rosemary with olive oil to coat. 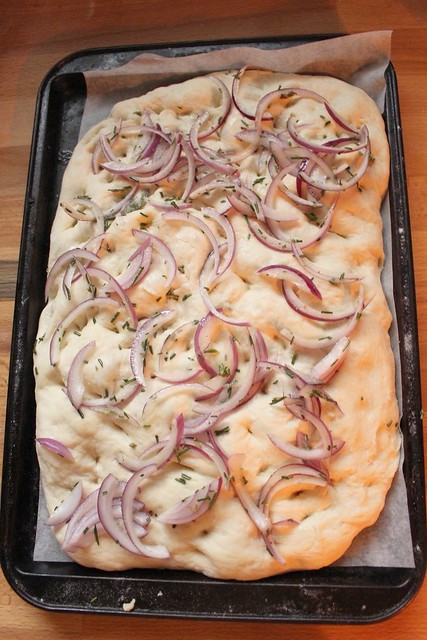 Preheat oven to 400F and sprinkle onion evenly over the dough. Sprinkle with sea salt. I also added some more olive oil to the top. 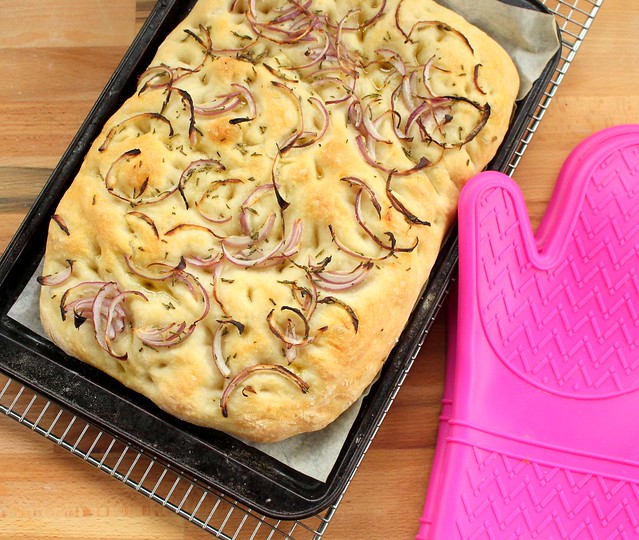 Bake focaccia for 25 minutes, until golden in colour. 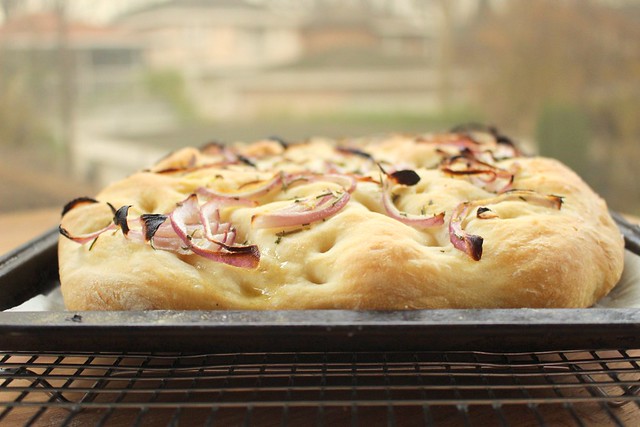 This is a beautiful focaccia! I should have been more generous with the salt than I was for it to be perfect but next time… Live and learn! 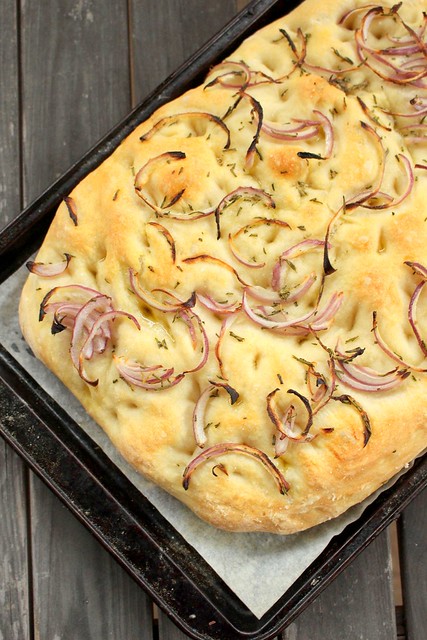 Anna was right. This was an easy dough to make, even my weak and sensitive hands did just fine kneading the dough together. The hard part was how much time it took so make sure you can start early enough in the day to make this without being time crunched. There was very little light left by the time mine was done so I took it outside and photographed it on my deck.

Thank you Anna! You have given me confidence to set aside my mixer and bread maker and make homemade bread from scratch all by myself. that is a foodie miracle. I give this recipe five out of five wooden spoons. 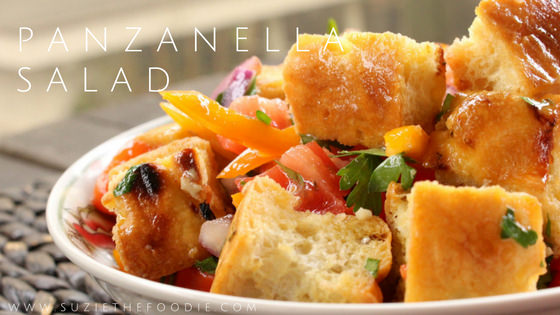 Have leftovers? Why not make my Panzanella Salad?