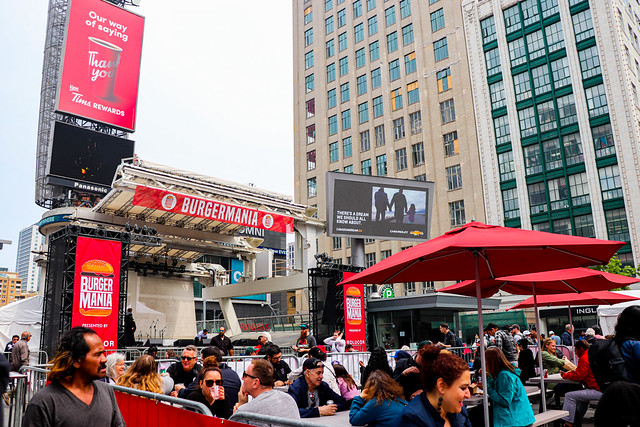 It was amazing. I got off at Dundas station on the subway and all I could smell was… MEAT! It brought a big smile to this foodie’s face. 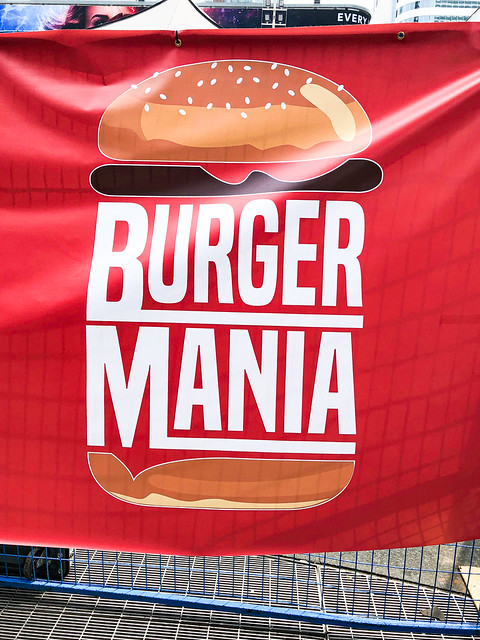 I followed my nose up the stairs and out to Yonge-Dundas Square to attend Burgermania 2019. 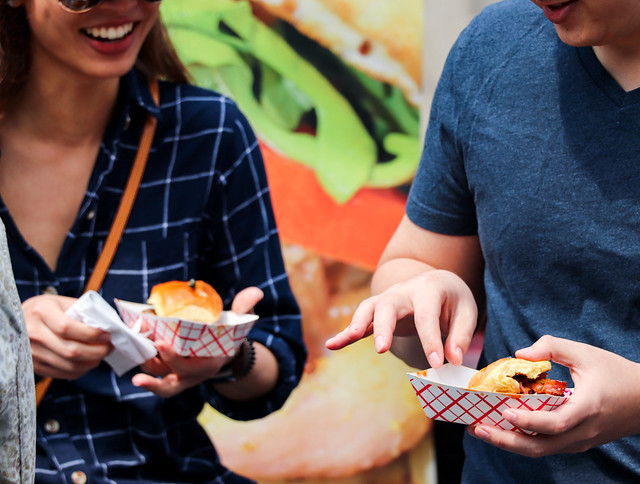 Burgermania is a free three-day food “extravaganza” and there were so many options with people eating everything, everywhere! 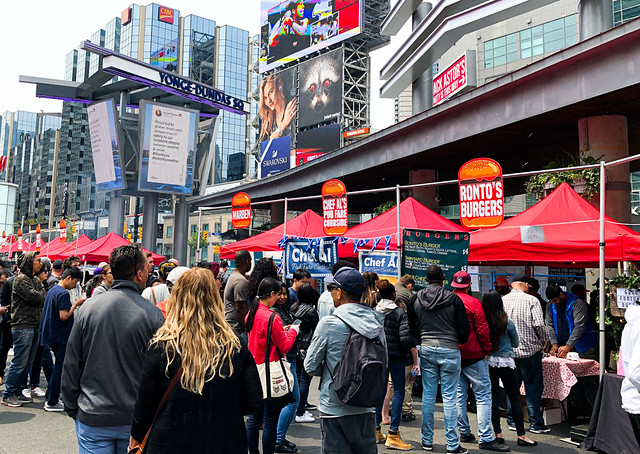 There were so many options! There were well over a dozen burger vendors alone. I must have circled three times before deciding where I wanted to start to devour a slider in this exciting concrete jungle. 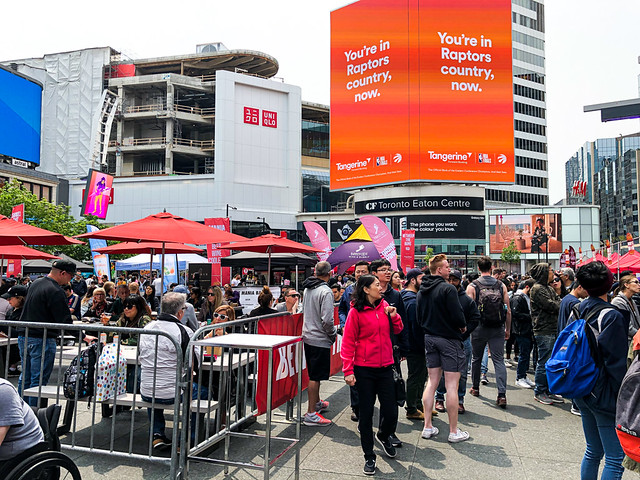 I was relieved to see that there was a sitting area with covered picnic tables and also standing tables for those who just wanted to eat and go. 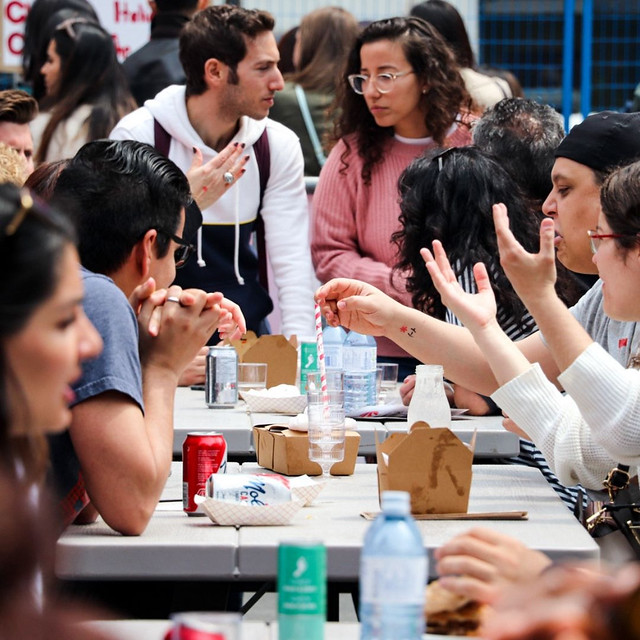 The turnout was excellent despite the potential rain which never came. I am so glad I went. 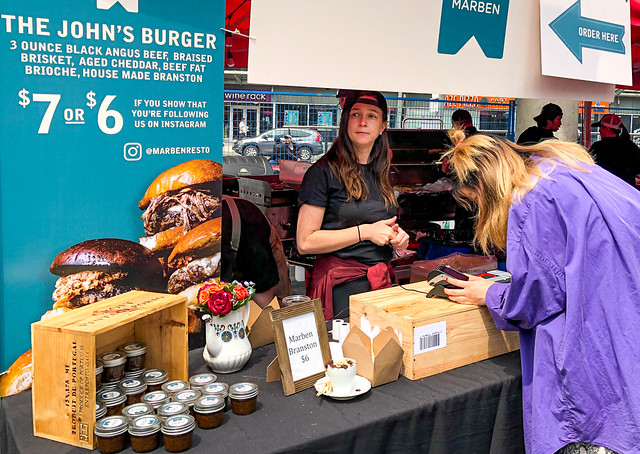 It was a little bit overwhelming. The lines for the most part were quite long and dense so it was challenging to get to see what was actually on the menu before you ordered. Also, you had to stand in line and pay by debit first and then get into the food line. That was very confusing at first. 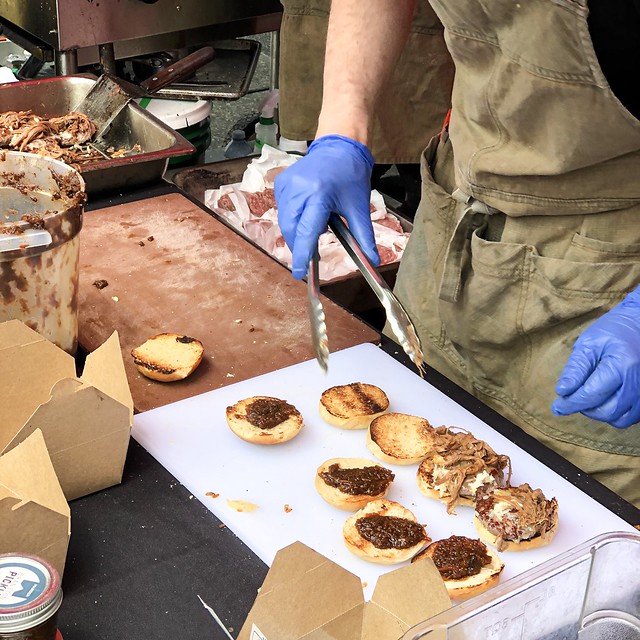 I liked the look of Marben‘s The John’s Burger made with Angus beef and braised brisket. I ordered one and got it for $6 which was $1 off because I started following them on Instagram. Smart marketing! 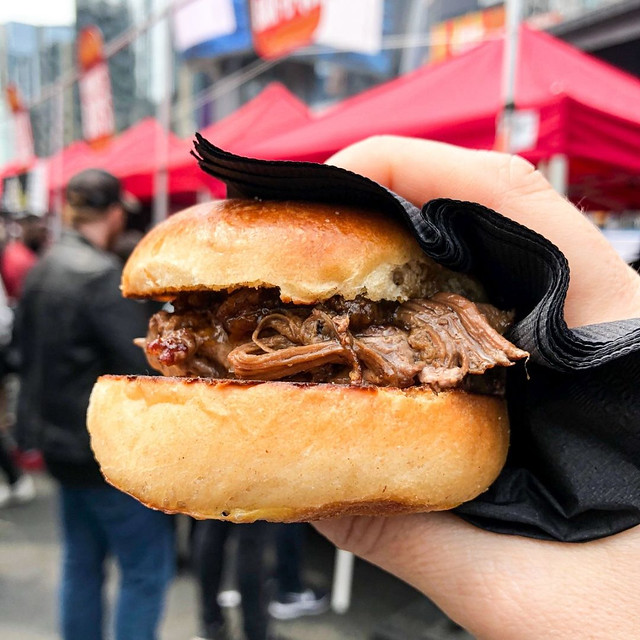 The line was not too long and it moved quickly. Before I knew it I had the slider in my hand. 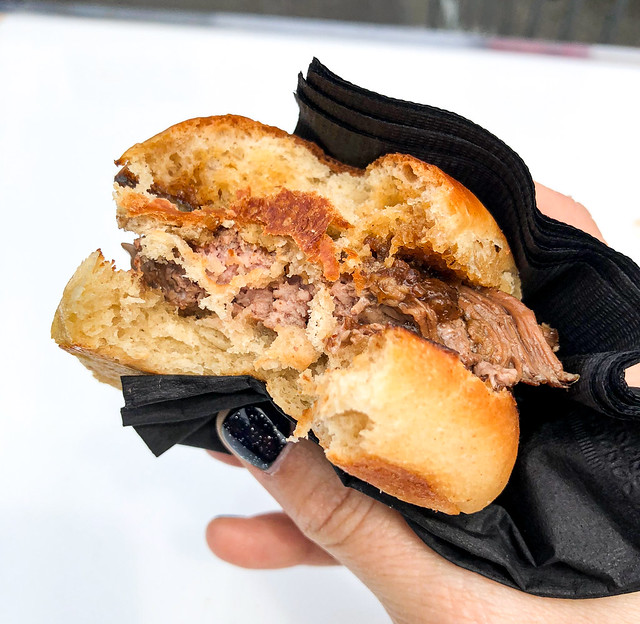 Damn!!! Dry! The meat was good but there was not enough sauce and the buns were cold. Sadly I give this a weak three out of five wooden spoons. Bummer! 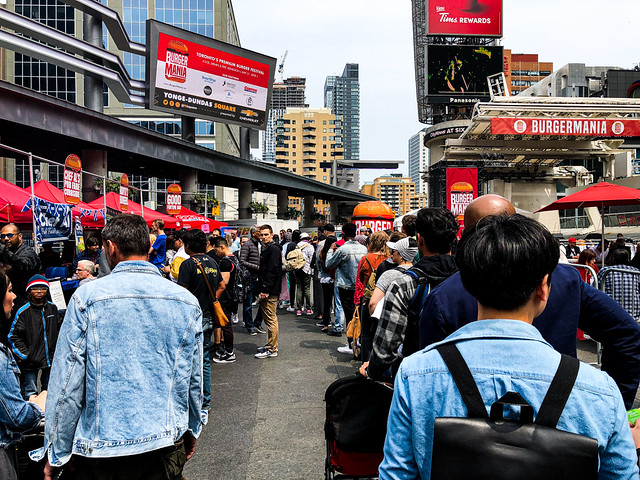 After being super disappointed in that first slider I decided to get into one of Toronto’s infamously long lineups, hoping that this time the food will be better. 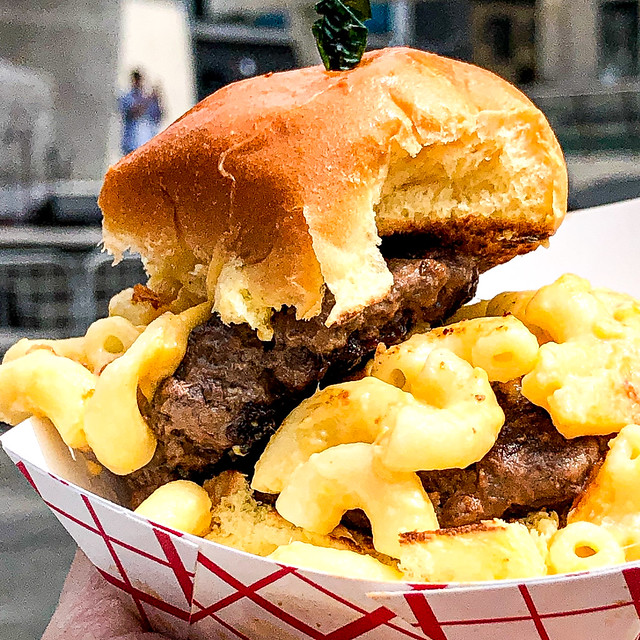 I got Ronto’s Burger’s Mac & Cheese Burger that was supposed to come with two beef patties, cheddar cheese and three cheese mac for $6. Well I didn’t seem to get the cheddar cheese unfortunately but this slider was delicious. The meat was phenomenal and that mac was tasty. I even had a food photographer stop and photograph mine! That is a first for me. I give it a four out of five wooden spoons. 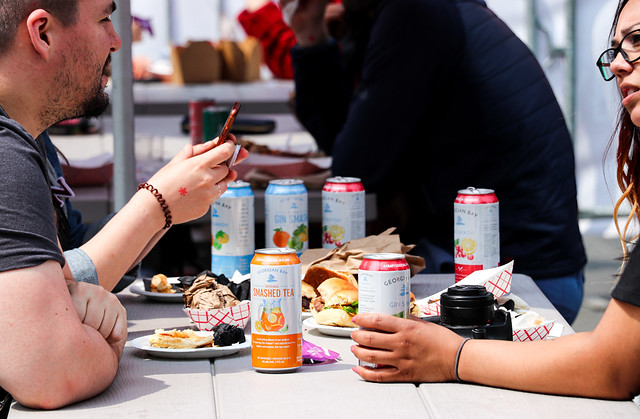 I am usually the one running around with the cameras photographing other people’s food. 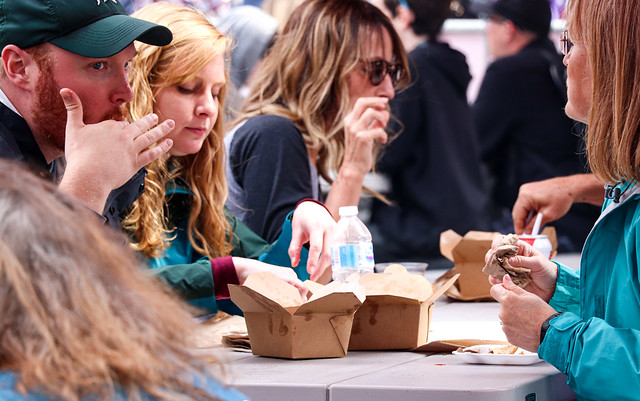 This was a very cool event that I enjoyed a lot. My one complaint was the music that blared from the stage when there was no one performing. It literally hurt and I honestly do not know how people could talk with one another over it but I know they made do when they were not eating. 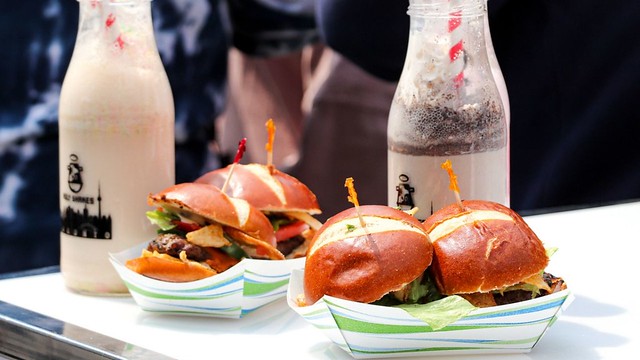 Everywhere I went I saw people drinking from milk bottles while they were enjoying their sliders. 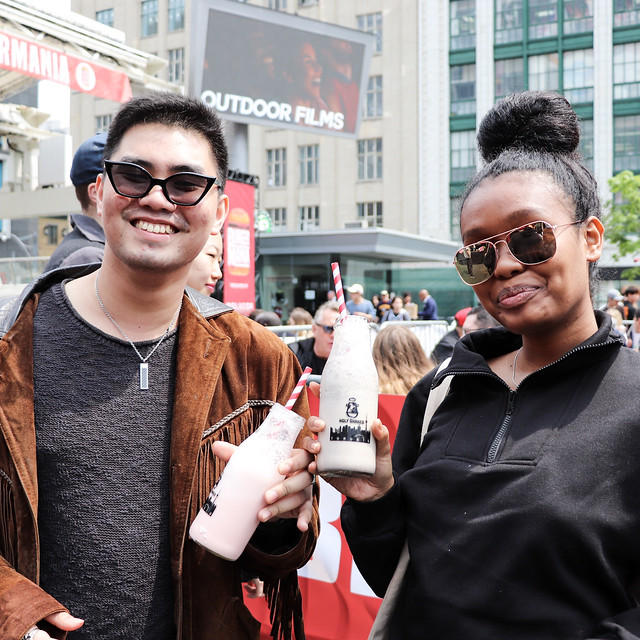 I asked this fabulous couple where they got them and they said Holy Shakes.

Well I could not say no to that so I found their stand and ordered the birthday cake shake since I am not a fan of Oreos and the flavour of rose, while wonderful, can be overpowering. 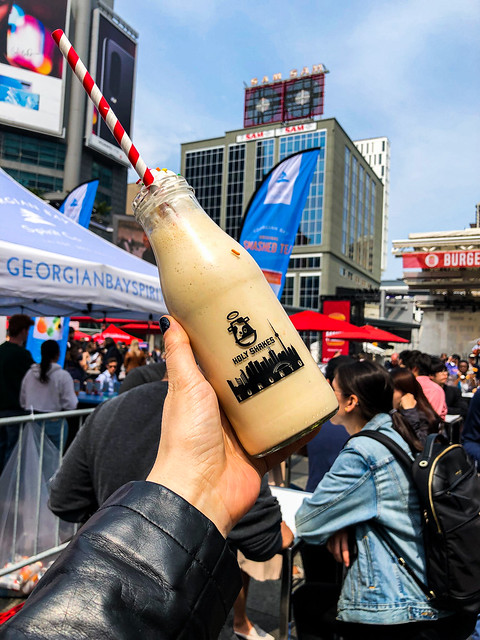 It is basically a very creamy dreamy vanilla shake. 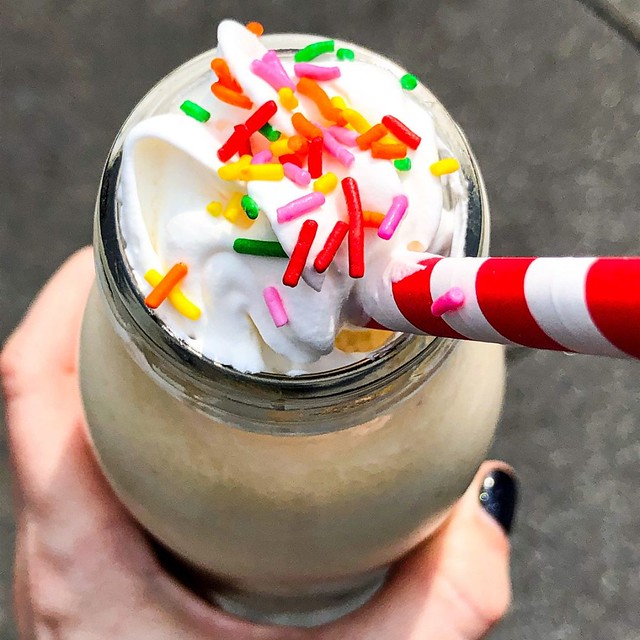 And yes it comes in real glass milk bottles which is probably why is cost more than the sliders at $8! Honestly though, it was delicious and a perfect treat after those two sliders. I give the shake a four out of five wooden spoons. 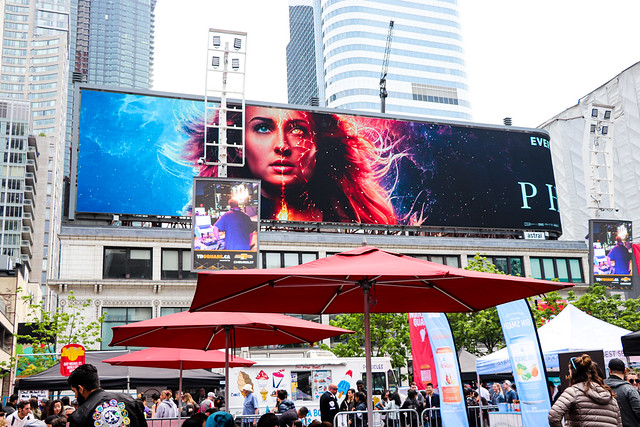 Burgermania was easy to get to, free, had a good amount of seating and a ton to choose from when it comes to burgers. It lived up to its name and did not disappoint at all. Yes, the music was a bit crazy-loud and seriously, where was the recycling and compost??? But I have been to events that were total disappointments in comparison that I PAID to attend! 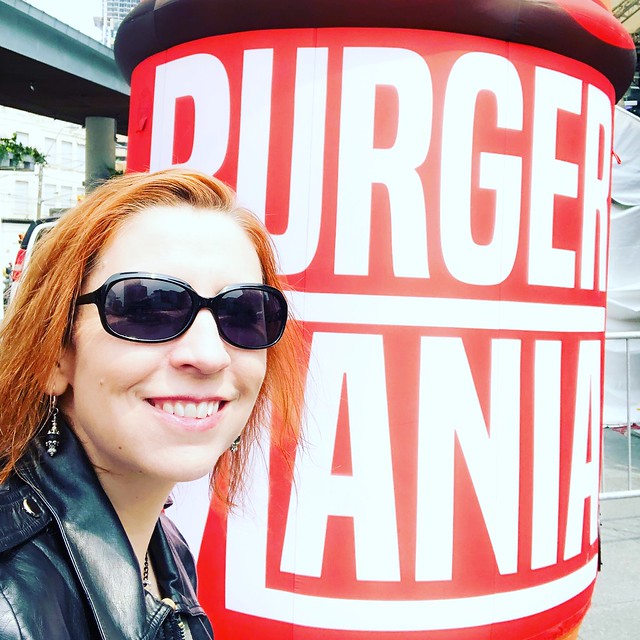 The great thing about the festival is you can just show up, grab a burger and go about the rest of your busy and exciting day in Toronto. The location was perfect, the prices very reasonable and the food quite good. I would love to come back and enjoy it again and can not wait for more foodie venues at this location!

I give Burgermania 2019 a four and a half out of five wooden spoons.