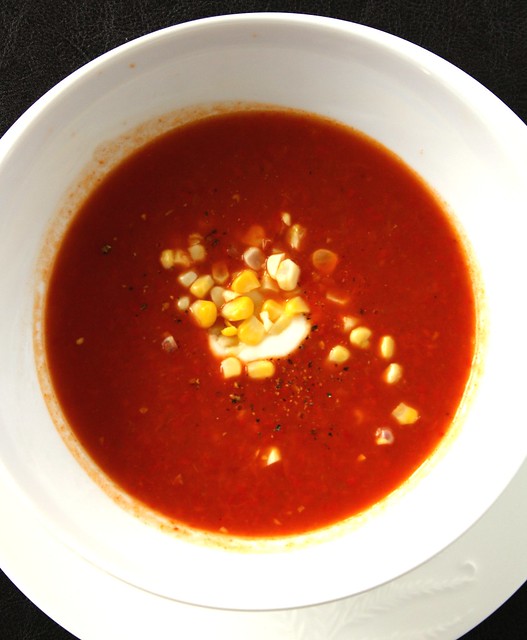 We are moving into soup territory at this time of year and I love soup! I recently got a great deal on some red peppers and taught myself how to make oven-roasted red peppers, so much easier than I thought it would be! I had to throw them in the freezer because life got busy and when I finally had a day at home I used them to make this roasted red bell pepper soup which was astounding! It was inspired by this recipe but I of course made a few changes along the way. To roast the corn for the garnish I wrapped it up in parchment paper and then aluminum foil. I roasted it in a 350F oven for 40 minutes. The corn ended up being so sweet and lovely! While the corn was roasting I had put the peppers on a plate to let the residual heat thaw them out a bit. Then I chopped up the peppers and removed the corn kernels with a knife. I gently sauteed half a cup of onions and shallots with two cloves of minced garlic in 1 tbsp of butter. I added four chopped roasted red peppers, 2 tbsp of tomato paste and three cups of chicken stock. I brought it to a boil, lowered the heat and simmered the soup for 20 minutes which is longer than the original recipe but I wanted to enhance the red pepper flavour by reducing it. As a result I did not have to add the whipping cream, keeping it lighter and healthier than the original recipe. The soup did need some thickening so I put 1 tbsp of cornstarch in a little bowl, added a little water, combined and then added it to the pot, stirring and letting the soup thicken. While the soup was thickening I added some lime juice to a dollop of sour cream for the topper. Using the medium blade on my food mill I processed the soup. You could always use a food processor or a blender instead. Topped with some lime sour cream and a sprinkle of roasted corn with some freshly ground pepper, this recipe makes one beautiful and stunning soup. This made a small bowl for me and my husband, next time I am doubling the recipe! My husband said this was a five star recipe and I have to agree. I am not a huge red pepper fan but this type of dish is what they seemed to be made for.

Do not be afraid to roast your own peppers while making this soup. It is incredibly satisfying to know you went the extra mile to make this dish your own.