You are here: Home / markets / Shopping with Suzie the Foodie 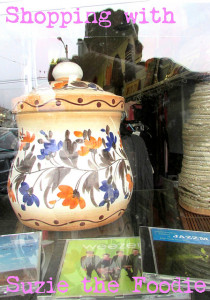 It has been a while since I did a shopping update and I just love sharing my treasures with you! 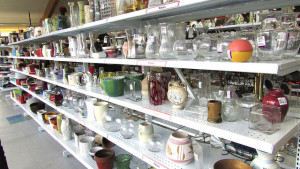 I walked into my Value Village the other day and they organized it! I HATE it!

Before, it was cramped and hard to see stuff so I could always find treasures nobody else would notice but now?! Ugh! 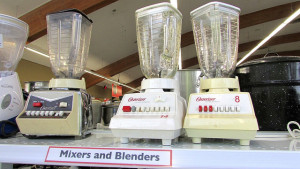 FYI: what you are looking at is foodie gold. Old Osterizer blenders are the best! Especially for making soups. If I did not already have three blenders (yes, the movers were just as shocked) I would have bought another one for “just in case.” 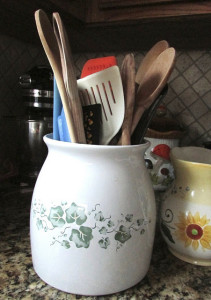 I finally replace my “other” utility bowl with this Cornell Ivy pattern vessel. It probably used to be an old cookie jar or something. My pitcher was getting pretty beaten up and I love using it for homemade lemonade in the summer.

I was drawn to this container because of the ivy pattern which reminds me so much of my mom. She loved ivy. 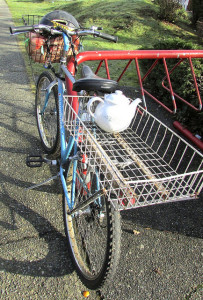 So check it out! On my way to the library I saw that someone had left a teapot in the basket of the bike. 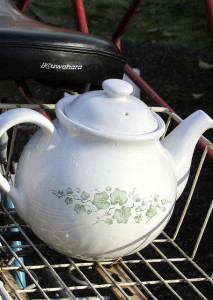 And look at the pattern! I felt like my mom was giving me a wink from above. I thought it was the coolest coincidence. 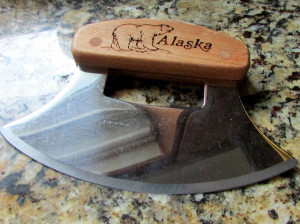 I also bought what I did not realize at the time is an Inuit ulu. It reminded me so much of a mezzaluna I had to have it and it was only $2. The only thing is, the blade is only sharpened on the one side. Great for removing fat off meat but not so great to use on herbs. 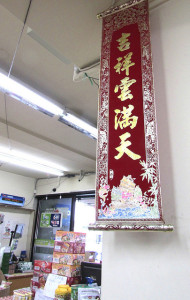 I have terrible social anxiety and sometimes the Chinese markets in my neighbourhood can almost set off a panic attack in me. They are so busy, busy, busy!!! But I love it. Great energy, I just have to get over myself.

I have been growing bolder and bolder, spending more time just looking and buying things beyond bananas and red peppers. 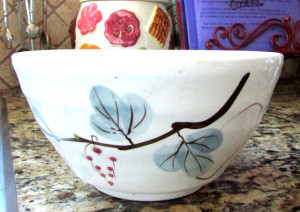 For the New Year I bought myself a big noodle bowl. It was a symbolic gesture to the Universe that I was an empty vessel ready to be filled with its foodie wisdom. And lots and lots of noodles of course. 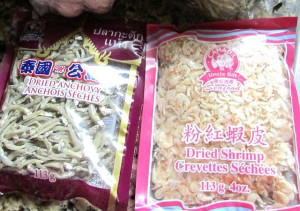 Every year I try and choose a word for the year and for 2015 it is “explore.” I want to be a brave explorer of so many things but especially of food. Try things I have never tried before. As a result, I picked up a bag of dried anchovies and a bag of dried shrimp. I already made dashi with the dried anchovies! Man, that took courage. It was awesome. 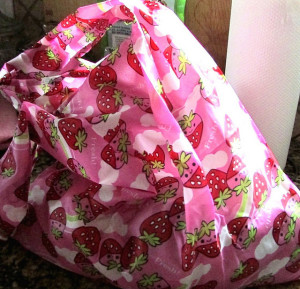 I also bought this bag to keep with me for picking up fresh produce at the markets. It only cost me $2 and oh my goodness, aren’t those strawberries cute? Reg just LOVES carrying the food home in it when he comes with me, LOL. 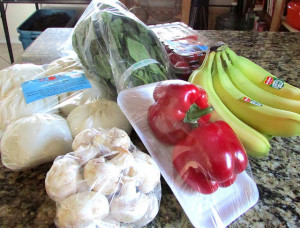 Reg and I only get to the grocery store around once every two weeks so I end up picking up a lot of produce around where I live which is crazy cheap, I am in heaven! And yes, I am still addicted to those BBQ Pork Buns. 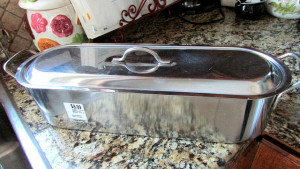 We are on a tight budget but I could not say no to picking up this fish poacher for under $10!!! 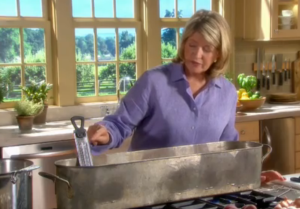 I remember watching the fish poaching episode of Martha’s Cooking School and when she took out her fish poacher I was all like, Martha, who the hell has one of those?! 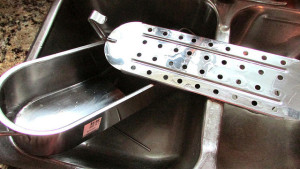 Yup, I could not handle the foodie tool envy any longer. Hers is much bigger than mine but I can live with that. I have various fish markets where I live and one of the big foodie adventures I want to take this year is, you guessed it, poaching a whole fish. Just like Martha. 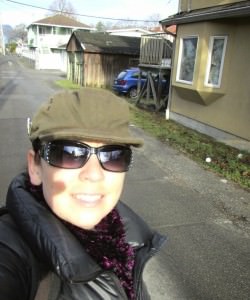 I can’t tell you how exciting it is to be able to go out on my own just a few blocks and discover so many treasures. In JANUARY!!! So much fun.

If you want to see what I buy in real-time, considering following me either on Facebook or Twitter. I love coming home and taking pics of the goodies I bring home and sharing them with my foodie friends.