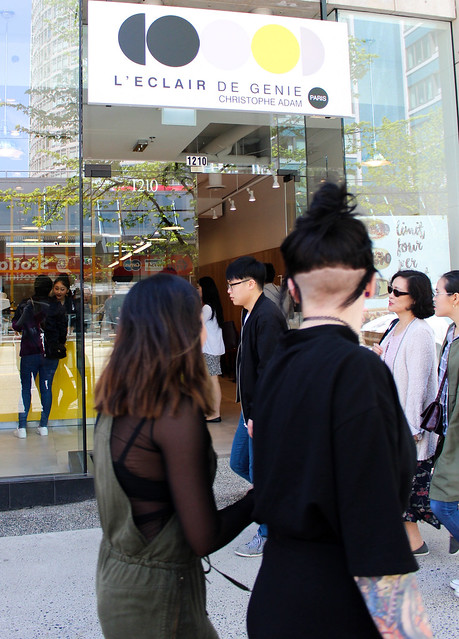 L’éclair de génie is the Vancouver hotspot at the moment. It just opened last weekend at 1210 Robson Street in the heart of downtown Vancouver, AKA foodie Mecca. Chef Christophe Adam opened up his first éclair shop in Paris back in 2012 and this is his first North America release! What an honour. 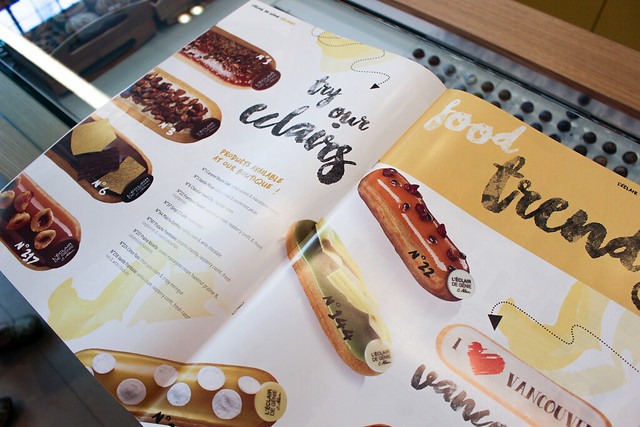 Thursday was a gorgeous and suddenly summer-like day so I and my friend Pepper headed to the mono-product shop to check out their goodies.

Right away, ordering was confusing. There was no menu for you to check before you got to the counter. Instead we went inside and picked up this magazine that had information about the different éclairs. We perused it a little and then realized… 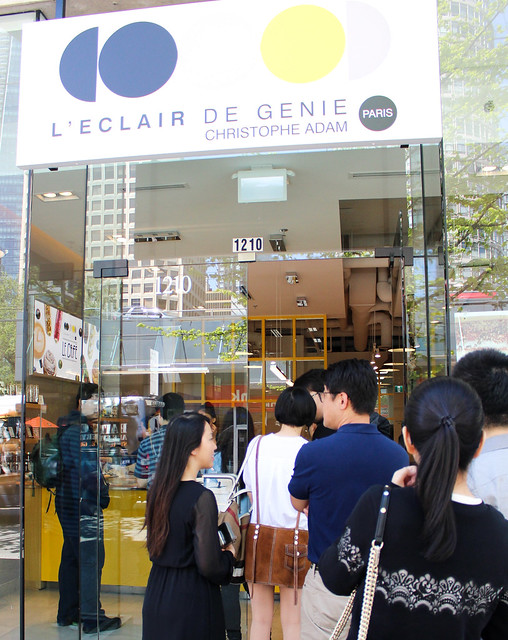 Holy crap! There was suddenly a big lineup out the door! We took the magazine to the back of the line and used the waiting time to figure out what flavours we wanted to try. 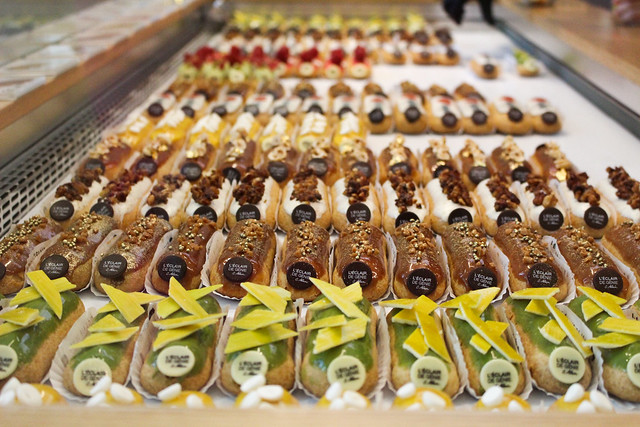 It was not easy to choose from the 10 different éclairs. Some of the flavour combinations were quite elaborate and their numbering system for each one was no help. No way I was going to remember I wanted a No197 and No217. 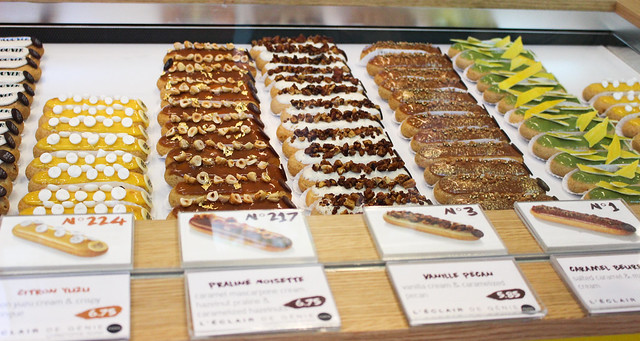 This is not some fast food restaurant where you order by the plate number. These are elaborate éclairs! #showsomerespect 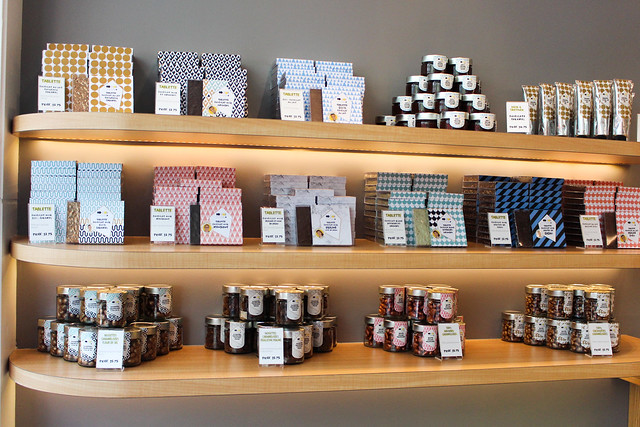 There were other products for sale but there was no way I was going to risk my spot in line by checking them out. 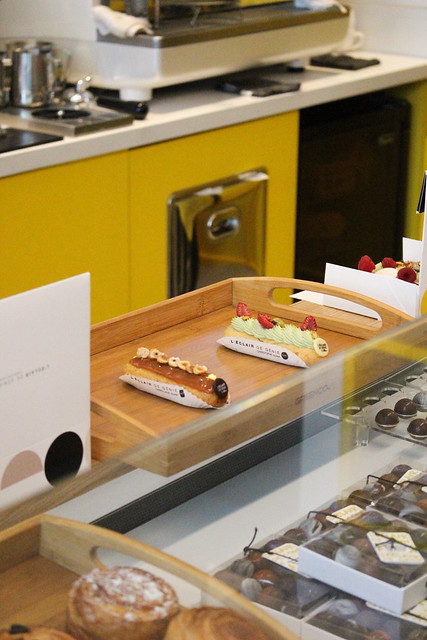 Numbers translated… I ordered the Praline Noisette and the Pistachio Framboises. They were each $6.75. 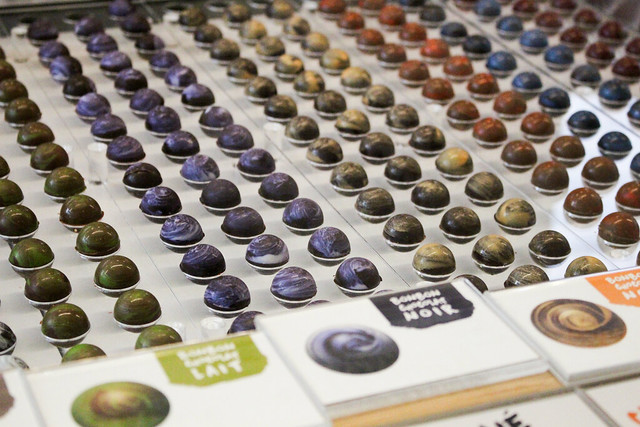 I also ordered one of their very cool chocolate spheres since they were on their way to the cash and only cost $1.75. There were also other pastries to choose from but I was good. My order came to $16. 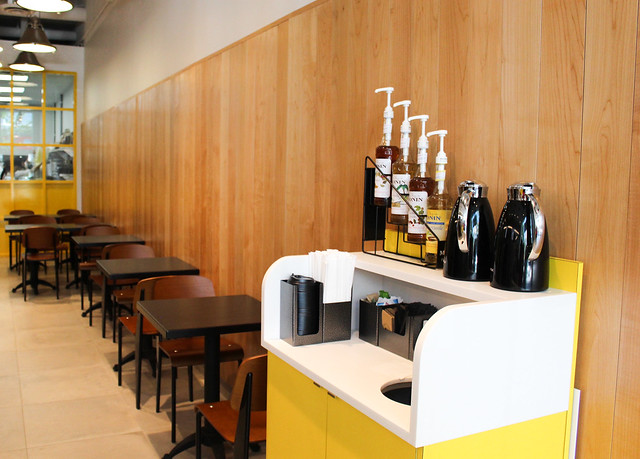 FYI, L’éclair de génie does not have decaf coffee which is a shame. They did give me iced water though and the service was absolutely lovely.

The space is quite sparse and modern. I was very grateful there was seating at the back which, after we sat down, became completely full! 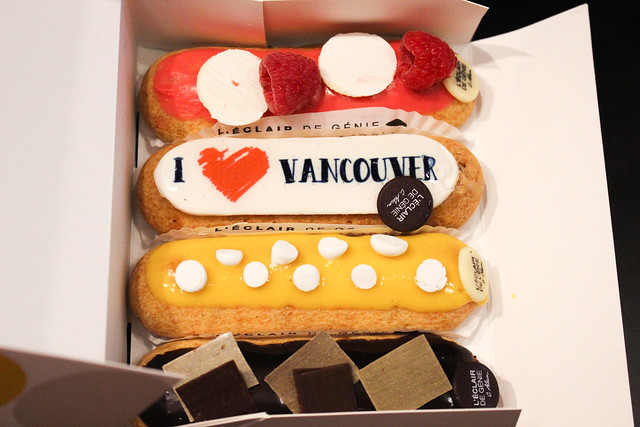 Pepper bought four éclairs! Believe it or not, the place has had so much success that they have had to limit people to only four éclairs per person, LOL. She got a No6, No224, No37 and No258. I know, ridiculous right? Like that means anything! 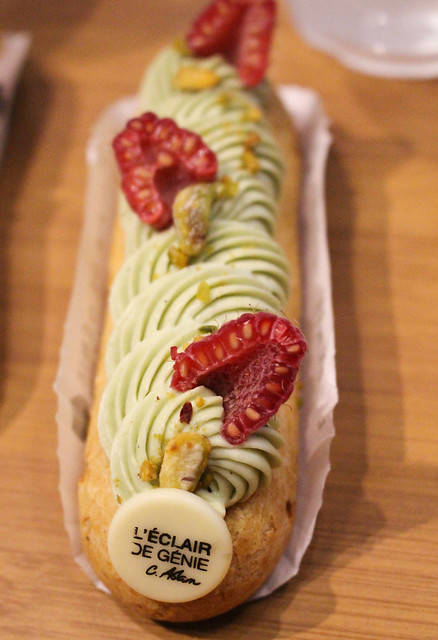 I started off with the Pistachio Framboises éclair which is pistachio Chantilly, raspberry confit, fresh raspberries and roasted pistachios.

We took one bite and wow. Stunning! The raspberry was so vibrant and delicious and worked wonders with the pistachio crunch. I was hoping for more pistachio flavour since it is one of my favourites but the raspberry was too overpowering. 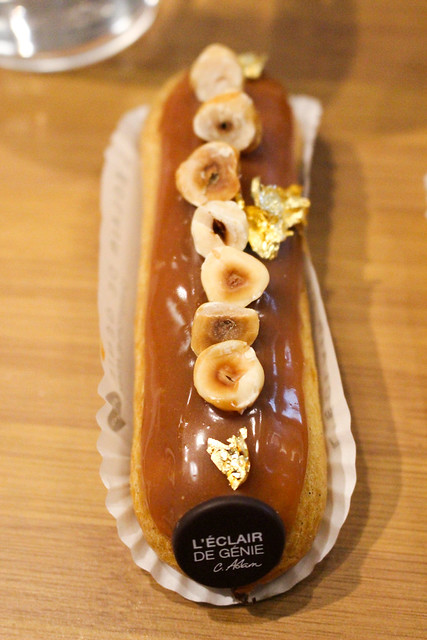 I was disappointed about one thing though… Those are NOT caramelized hazelnuts. They were PLAIN roasted hazelnuts so that was a total disappointment since I love pralines. In a way you could say the whole éclair was one de-constructed praline but no. That was false advertising. Perhaps they added the gold leaf to compensate? 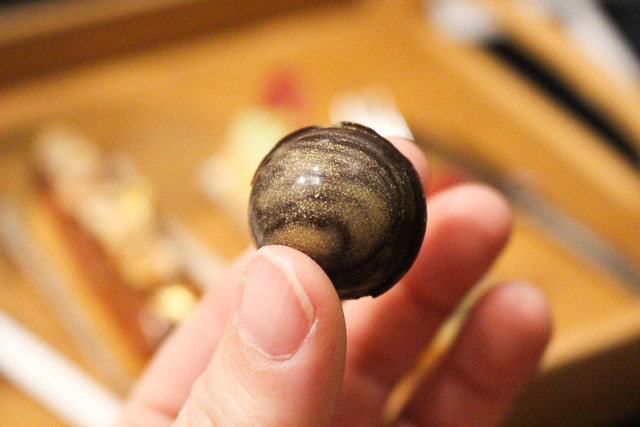 What a beauty that caramel chocolate sphere was! So stunning and felt completely sci-fi which was very cool. That said, it was exactly as described. A round chocolate that when popped between your teeth dissolves in caramel along with the melting chocolate. Wonderful! 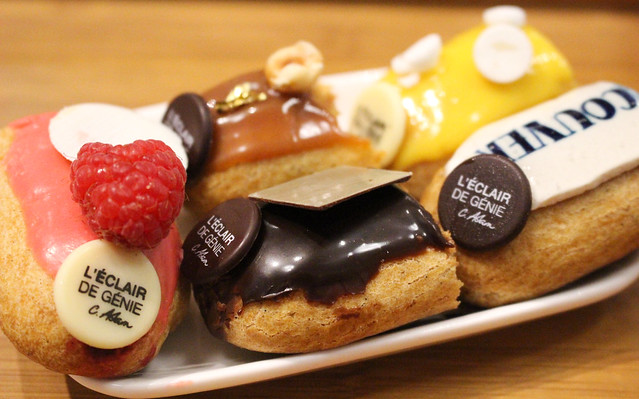 Then we moved on to Pepper’s choices which were: Vanille Framboise, Chocolat Grand Cru, Citron Yuzu and Sirop D’Erable.

The raspberry one with vanilla cream, raspberry confit, fresh raspberries and white chocolate was lovely. No surprises, exactly as described and delicious. The same went for the Citron Yuzu which, despite being made with a yuzu which looks more like a grapefruit than a lemon, tasted like a zippy homemade yellow curd.

What did surprise us was the Chocolate Grand Cru. The only description for that particular éclair is “chocolate cream” but the term “grand cru” is supposed to hint at being genuinely French chocolate, I think. If that is the case, genuine French chocolate is so bitter and harsh it is no friend of ours. You have to be a big fan of dark chocolate to enjoy that one. 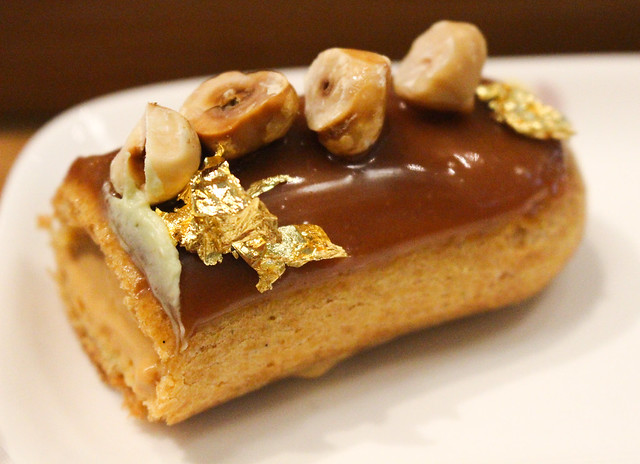 Despite being caramelized-hazelnut deficient, the Praline Noisette was the absolute winner for both of us. 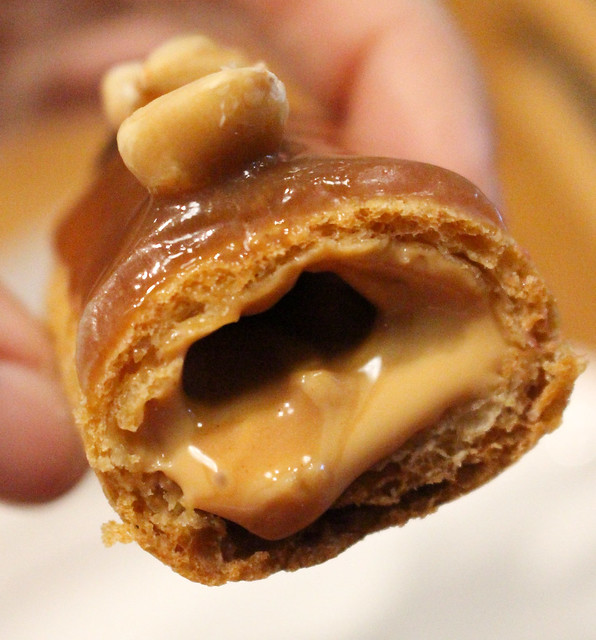 The Pistachio Framboises is a close second but it was the Praline Noisette that delivered the most flavour and originality. 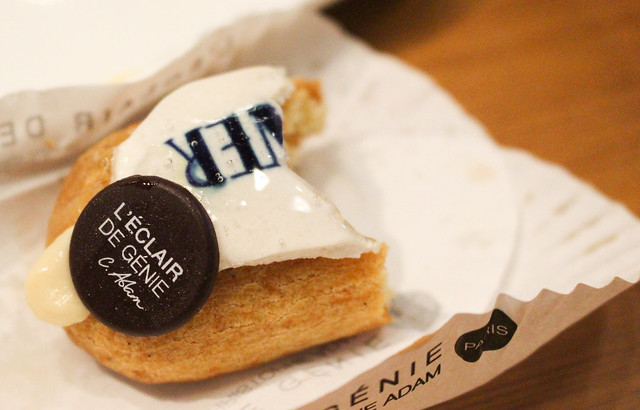 Sadly, the I *HEART* Vancouver éclair was the worst! By far. It was supposed to be filled with maple cream but it had zero flavour. Whatever they used to ice the top and glaze with what looks like glycerine or clear corn syrup also had… no flavour. Pepper said that the chocolate tablet on the front was the best part of the éclair and she was right. Terrible. This one was a total waste of money and offensive to Vancouverites. We are not BORING or FLAVOURLESS! 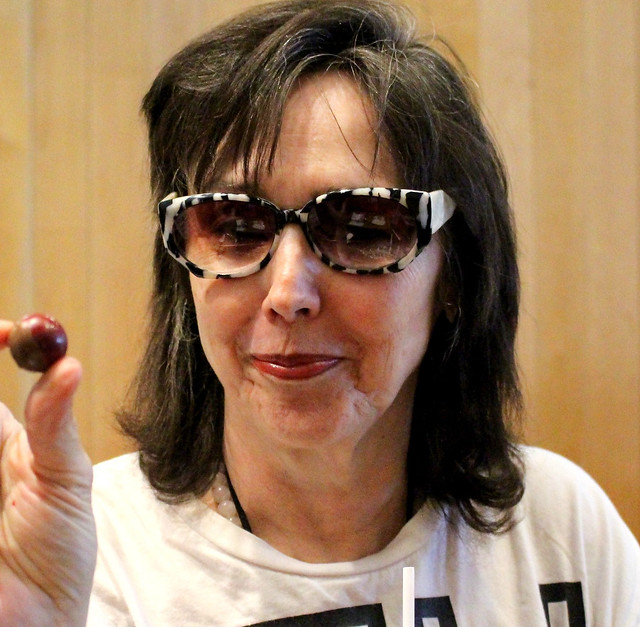 Thank you to Pepper for coming with me on this epic foodie adventure! I am glad I skipped lunch on Thursday so we could indulge a little less guiltily on so many treats. It was the perfect foodie day out. I am so grateful. 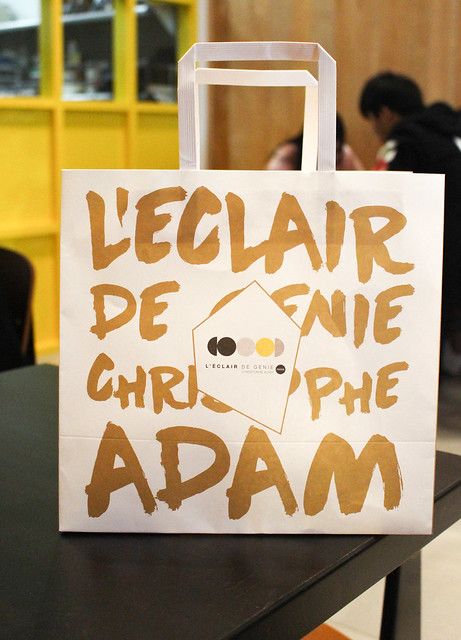 The people who work at L’éclair de genie were extremely gracious and patient. They must be the busiest place in Vancouver right now and I am so happy for their success! I hope they continue to come up with new fascinating flavours for us to try. Welcome to Canada!

I give this overall foodie experience four out of five wooden spoons. Some big hits but some foodie misses too. Definitely worth going to check out and taste for yourself.

That Is A Wrap! 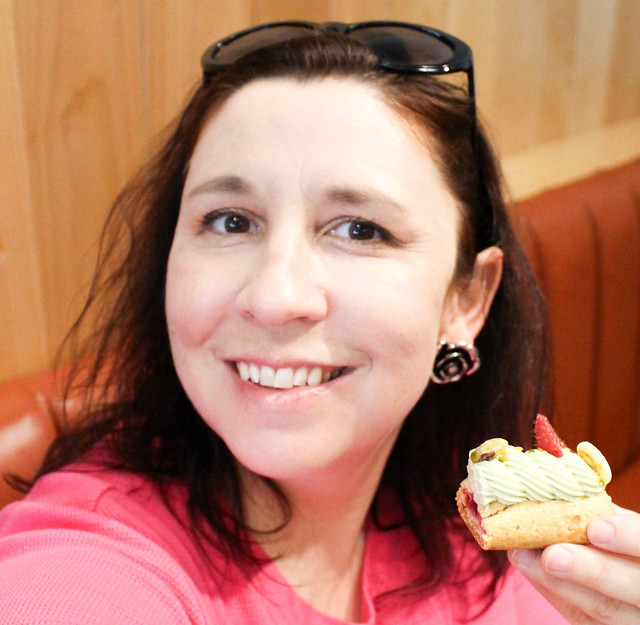 It has been quite the foodie week! I came up with my epic foodie bucket list, made bagels for the first time (which is on my list), got to check out Ramen Heads from Hot Docs…. AND actually get out of the house and visit THE place to be in Vancouver right now.

Life is delicious and if you want a laugh, watch me try and make éclairs for the first time. I have deep respect for pastry chefs.