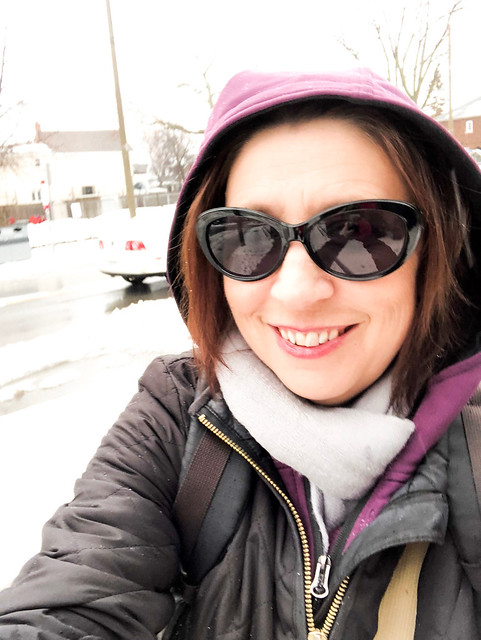 I had been looking forward to seeing Nigella Lawson at the Yorkdale Indigo for weeks! She was going to do a signing of her new cookbook At My Table and I was determined to go. The problem? The MEGA ice storm! It was causing flights to be cancelled including Nigella’s.

My friend Kelly was checking her Twitter account, calculating when her tweets stopped with potential flights that actually got out of New York City and on their way to Toronto. My sisters helped me figure out how much time I could wait before leaving, just in case the signing was cancelled. Then I called Indigo and the clerk said it was definitely going to be later than scheduled, if it was going to happen at all.

I suddenly thought to myself if Nigella was going through all that flying hell to get to Toronto for this signing, I can brave ice, snow and slush. I got my gear, wore a ton of layers and headed out the door.

My Own Travel Woes 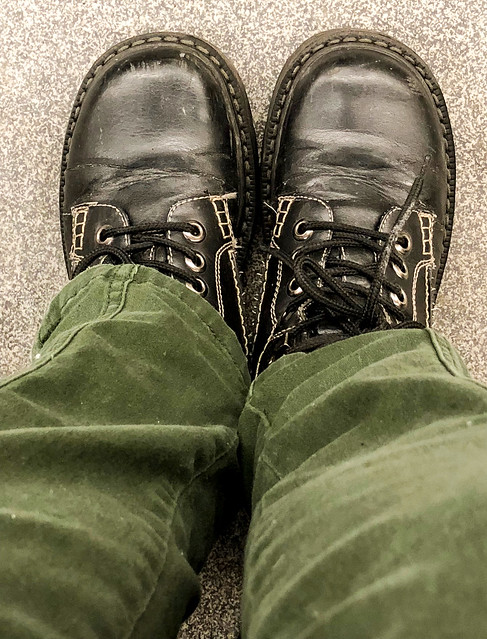 Since I got back to Toronto my time spent stuck underground in a tin can with wheels has been minimal. Until yesterday as I tried to make my way to Yorkdale Mall. A mall I had never really been to so overall I did know know where I was going. Ugh, anxiety.

Yesterday, there were delays. Lots and lots of delays. They must have added 20 extra minutes to my travel time. I sat there freaking out on my phone to my sisters but tried to appear calm and collected as I could see the mall from the subway. So close, yet so far. 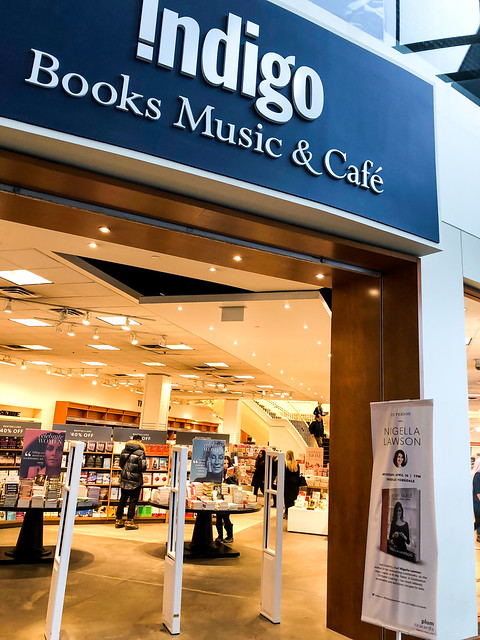 Thankfully I had looked at the general map of the mall before leaving so I had a general idea of where I was to go to get to the Indigo. I was quite out of breath and a bit of a mess but I got there. 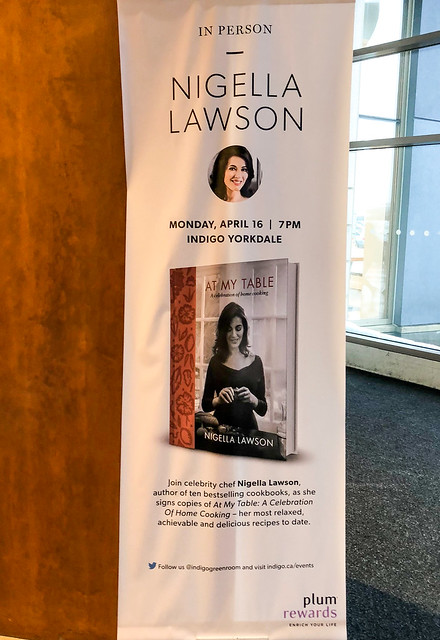 OK! The sign was still out, apparently the cookbook gig had not been cancelled. Thank goodness! I went straight to the cash and asked for the book. Turns out you have to pick up your own copy, LOL. Doh! I was not thinking clearly. I am still quite weak and that trek out there was not easy for me. 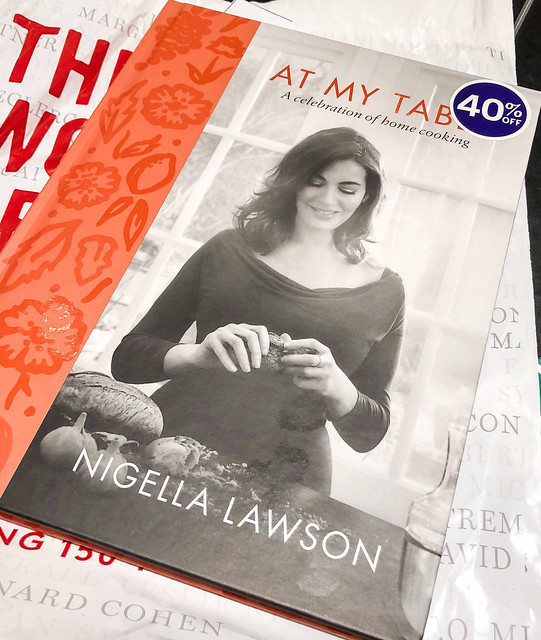 The cookbook looks fantastic by the way! Can not wait to do some recipe testing…

I tried a new product at Starbucks (review to come of course) and was shocked that I got a seat! Actually the first time I went in there were no seats so I kept coming back until I found one. It was going to be a long wait and I was in line 3!

There were lots of lovely people waiting for Nigella in the cafe and I want to say a particular thank you to the woman who got me a sticky note for personalizing the cookbook! I really appreciate it because I may have lost my seat if I left it for a second. You rock! 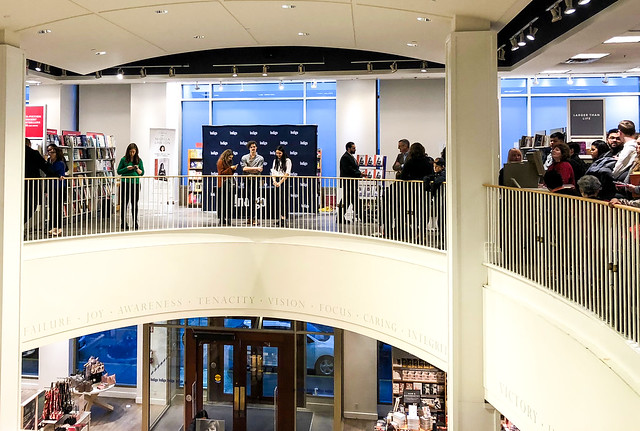 After an hour I had to get up. My back was killing me from sitting in that hard chair. Torontonians can be a little grumpy about waiting in line but overall if you talk to them they warm up considerably. 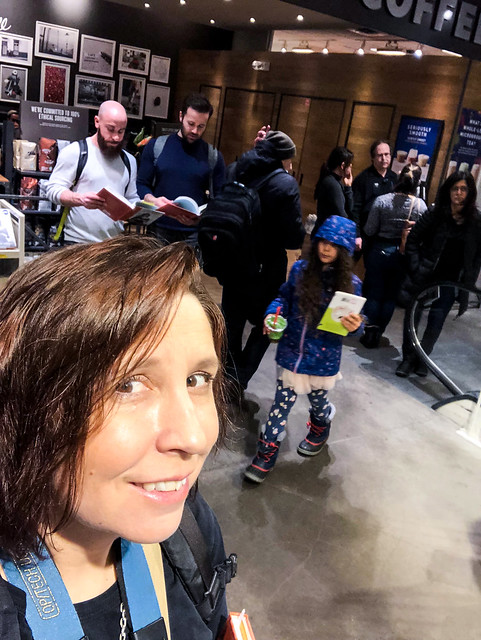 I mean we were all here for the same reason. To see Nigella! I had checked her Twitter feed and she had left the airport and was on her way. I felt so relieved knowing that this was ACTUALLY going to happen. 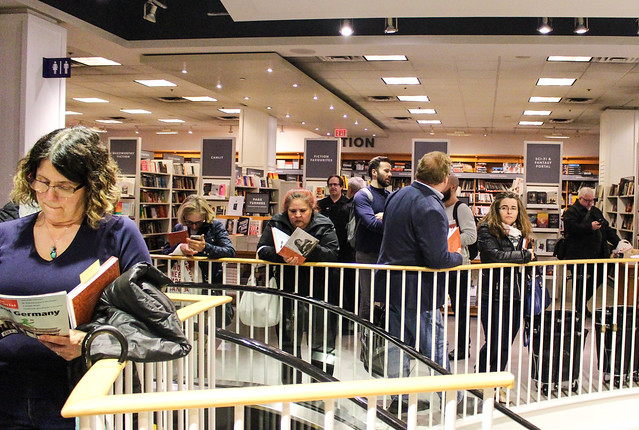 And it was a bit of a long wait. We were all reading the cookbook, checking our phones. I was reporting live via social media last night which kept me busy. Just as I thought my body could not stand it any longer, she arrived! 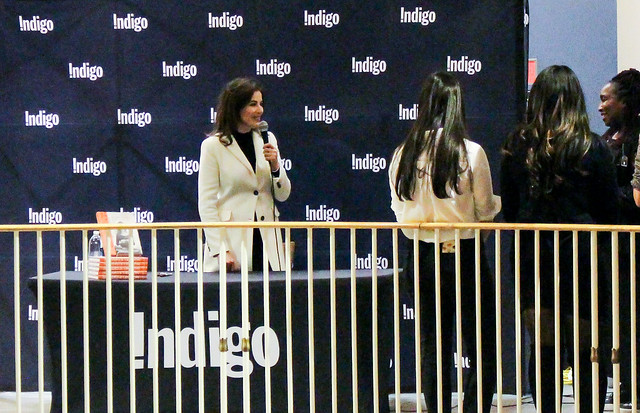 I think she said she had spent 10 hours at the airport but she made it! Nigella made it! What a trooper.

Here is a foodie minute video of her entrance which was very exciting. 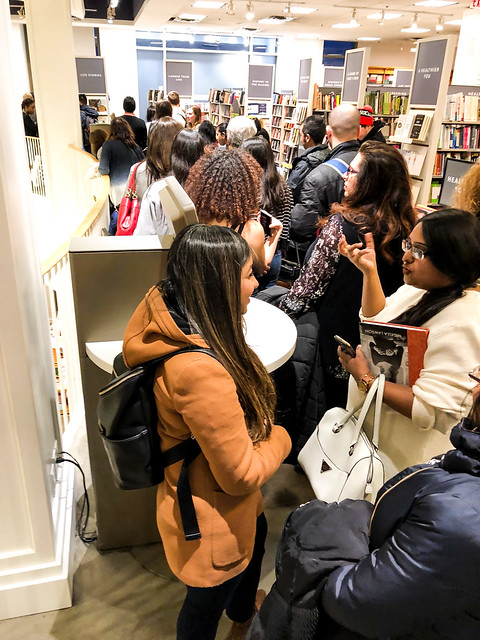 My only serious complaint about last night had to do with Yorkdale Indigo. There was absolutely no attempt to divide people up according to line numbers. Everyone I spoke to said, no, there is no system for the lineups so we all just stood there jumbled until our number was called. Total fail when it comes to organization on their part after we all waited so long, so patiently 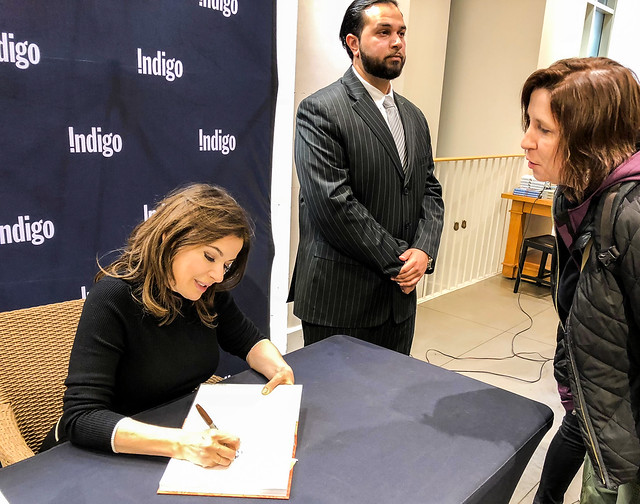 On a much happier note, I got my cookbook signed! Here I am asking Nigella if she thought food blogging was no longer relevant. As my regular readers know, I have been struggling with the realization that the food industry is more interested in social media “influencers” than food bloggers. This took bravery on my part because what if she said, oh yes, it is so passé! I had to do it though. 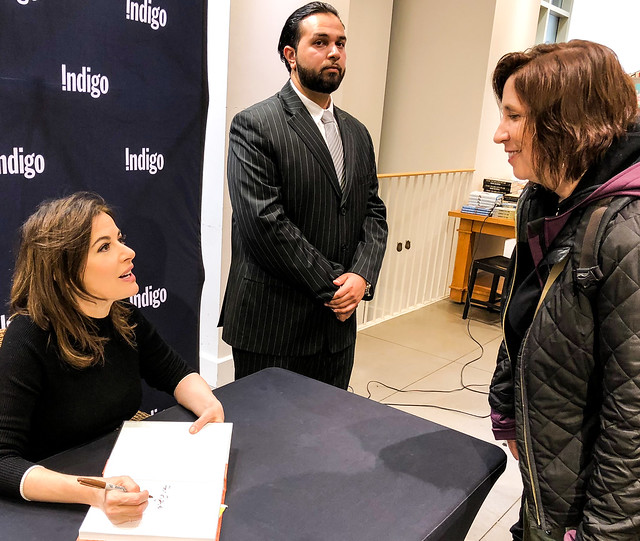 Instead she told me that people have been saying for years that cookbooks are irrelevant and clearly, they are not. That any way we can connect and discuss food with each other is a good thing. 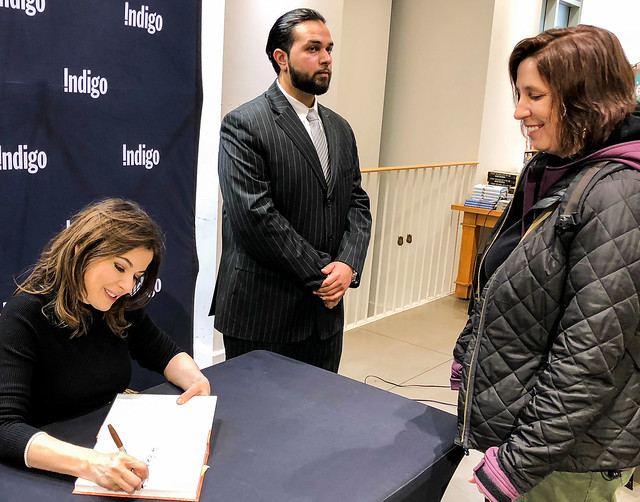 Here I am so happy with her response I forget all about the camera and just smile and beam. If there is anyone out there whose opinion I respect more than anyone else’s it is the original Foodie Goddess, Nigella Lawson. 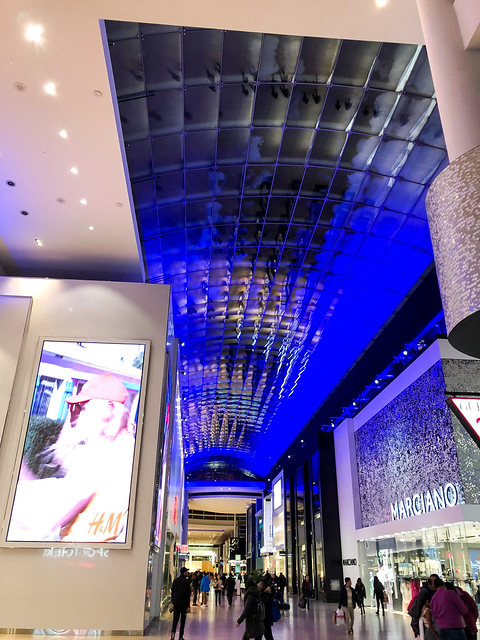 Despite the physical pain I was in (damn you fibromyalgia!) I walked home on a cloud. 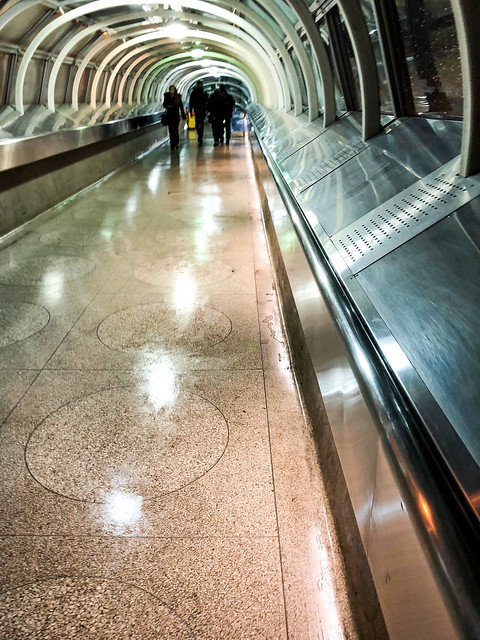 So much so that for the first time in my life as a Torontonian I took the subway in the WRONG direction! Didn’t care. I am relevant. Nigella thinks I am relevant! 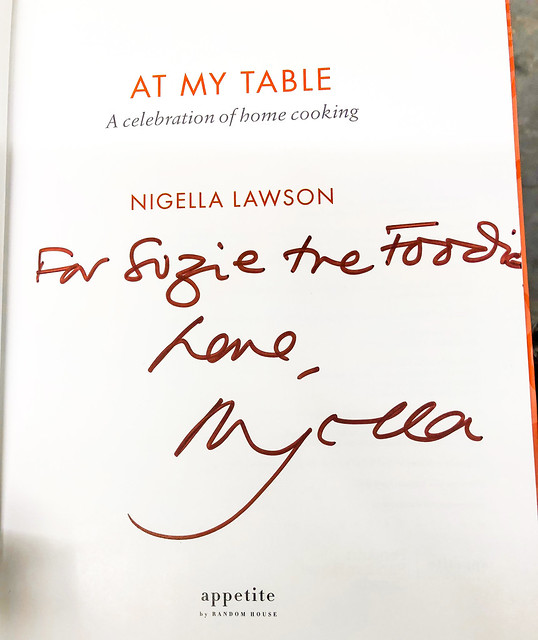 I did not say much more to Nigella other than thank you over and over again. In my head I was thanking her for inspiring me to become a food writer and photographer in the first place. She was the first person who brought a poetic voice to food and elevated it to art without compromising aesthetics over flavour.

I usually just do my own thing and do not need a heck of a lot of external approval for what I do but this has been such a hard year. I needed this and Nigella helped heal my heart and scare away my foodie fears. 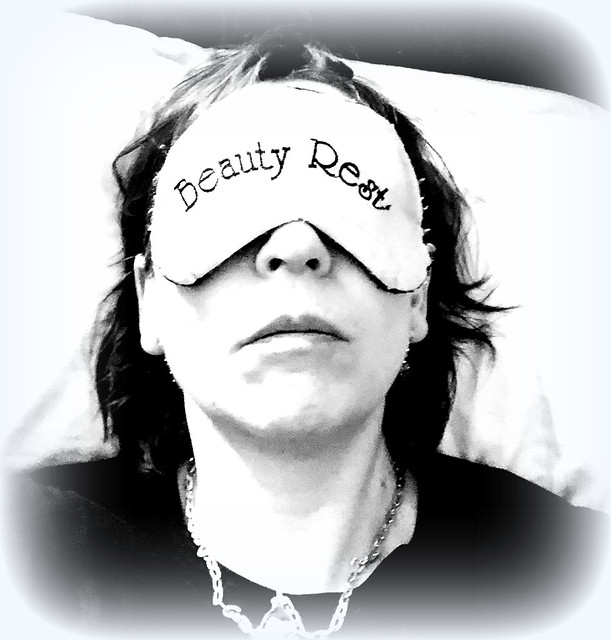 That took EVERYTHING I had yesterday but was totally worth it. I will be in bed the rest of the day gathering strength to go on my next foodie adventure.